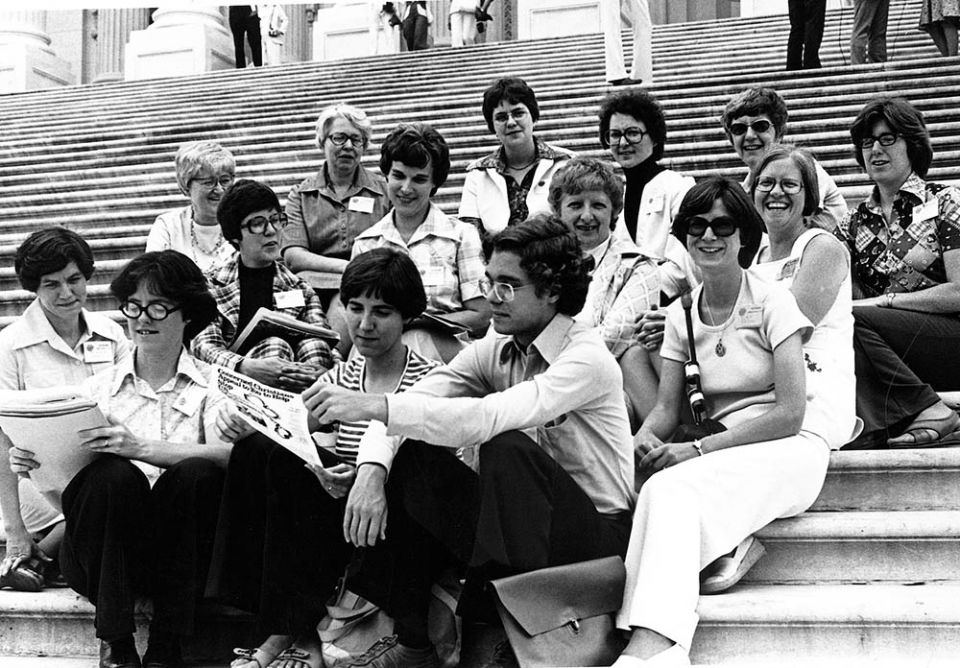 Catholic sisters are seen at one of Network's legislative sessions in the 1970s. The social justice lobby began in April 1972, and Network is starting celebrations of its 50th anniversary on Dec. 17. (Courtesy of Network)

Fifty years ago, on Dec. 17, 1971, a group of 47 Catholic sisters gathered at Trinity Washington University to discuss what came next after Vatican II.

Women religious across the nation had embraced the Second Vatican Council's call for renewal and reform and were joining the fights for civil rights and women's rights, and anti-war efforts. But they knew change needed to happen in federal policy, and voices in the streets would not be enough to influence that level.

They voted to create a nationwide network of sisters to advocate for social justice to federal officials, and four months later, in April 1972, Network Lobby for Catholic Social Justice was born.

Five decades later, the nonprofit is still going strong, and its board is still heavily populated with sisters.

Though the official 50th anniversary will come in April, the celebrations have already begun: Nov. 18 there was an online event examining the history of the organization, on Dec. 16 there will be an in-person event at Trinity Washington called "Spark of the Spirit," and at 8 p.m. EST Dec. 17 there will be a virtual kickoff event to officially start the events that will lead up to the big celebration in April.

"Whether you have been a part of the Network community for five decades or five years, I invite you to join us at our upcoming 50th Anniversary events — both virtual and in-person — throughout the year ahead," Executive Director Mary Novak wrote in an email.

All of the events, she wrote, will celebrate the spirit of sisters: "the bold, radical, joyful, and inclusive energy that motivated Network's founding and continues to animate Network's political ministry today."

The sisters of the Leadership Conference of Women Religious' Region 9, which covers Wisconsin plus one community in Illinois, are asking for prayers for healing and peace in Kenosha, Wisconsin, following the Nov. 19 verdict in the Kyle Rittenhouse trial.

Rittenhouse was charged with the August 2020 shooting deaths of two people and the wounding of another during civil unrest following the shooting of a Black man by a white police officer. He was acquitted of all charges.

"We are not presuming to offer a position on the verdict in this trial," the sisters said in a written statement. "We are, however, concerned that it is legal in Wisconsin for an underage individual to carry an assault-style rifle into a public demonstration. This has major ramifications on our rights to peaceably assemble, exercise free speech, and protest for redress of grievances."

The statement said the sisters are calling for responsible gun ownership, including stricter licensing, educational requirements and national background checks.

"What happened in Kenosha is indicative of what is happening in our society today. Our polarization has exacerbated an environment of fear and fears have led to violence and vigilantism," the statement said. "We believe that laws ensuring responsible gun ownership have not been adopted and enforced in our country. We urge our elected officials in Wisconsin to adopt such legislation before another situation like Kenosha erupts."

More than 80 Catholic sisters and advocates protested in front of the White House Dec. 3, decrying a return to the "remain in Mexico" policy forcing would-be migrants at the United States' southern border to wait in Mexico while their asylum cases are heard.

Normally, federal law and international treaties allow asylum seekers to remain in the United States while their case works through the immigration court system, which can take months or years. But under a provision in public health law known as Title 42, exceptions can be made due to public health emergencies.

The Trump administration invoked Title 42 in 2020, and the Biden administration suspended it on President Joe Biden's first day in office. But a ruling in a court case brought by several states requires the administration reinstate the policy, at least until it can find a process to end it legally.

On Dec. 8, border officials began enforcing the policy again at one location and plan to expand it to six others.

"President Biden needs to End Title 42 because it is cruel, ineffective, and counterproductive. Denying asylum and expelling migrants without due process simply adds misery upon misery to our most desperate and vulnerable fellow human beings, forcing them to take even more perilous risks to reach safety, often with tragic results for entire families," Sr. Andrea Koverman, a Sister of Charity of Cincinnati, said in a statement released by Network Lobby for Catholic Social Justice. 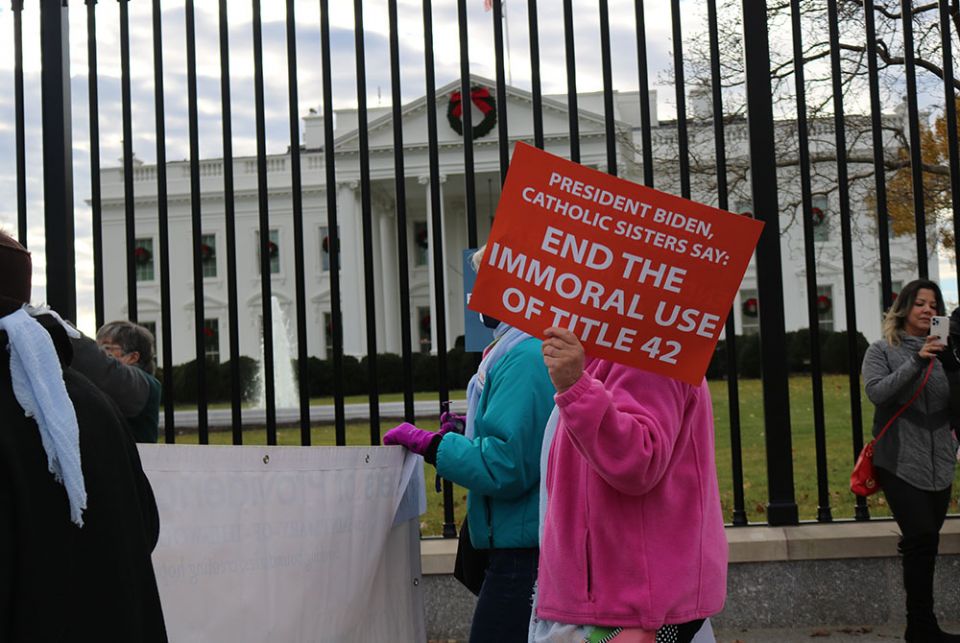 More than 80 Catholic sisters and other advocates gathered Dec. 3 at the White House to protest the Biden administration's plans to reinstate the "remain in Mexico" policy that forces asylum seekers at the U.S. southern border to wait outside the country until their cases are heard. (Courtesy of Network Lobby for Catholic Social Justice)

Network called the policy "a racist Trump-era rule with no medical basis."

"As long as the Biden Administration maintains Title 42, they are emboldening organized crime and are directly responsible to deaths of men, women, and children seeking protection at the Southern Border," Horan said in the statement.

In addition to the White House protest, advocacy groups across the country decried the policy's reinstatement.

"The Biden administration must understand that there is no way to reinstate the so-called 'Migrant Protection Protocols' in a moral or humane way," Tami Goodlette, director of litigation at the Refugee and Immigrant Center for Education and Legal Services (RAICES), said in a statement. "Instead of keeping its promise to provide a border where migrants can seek asylum as permitted under U.S. and international law, the Biden Administration is choosing to carry out inhumane and xenophobic policies from the Trump era that will continue putting families and children into danger."

"First, the name itself is a lie. It has nothing to do with the protection of migrants, and it places families in dangerous situations among communities that are already suffering from a lack of resources," Seitz said in a statement. "Second, MPP operates on the assumption that those coming to our border have no right to enter. To prevent those who seek asylum from entering is not only heartless, it is illegal."