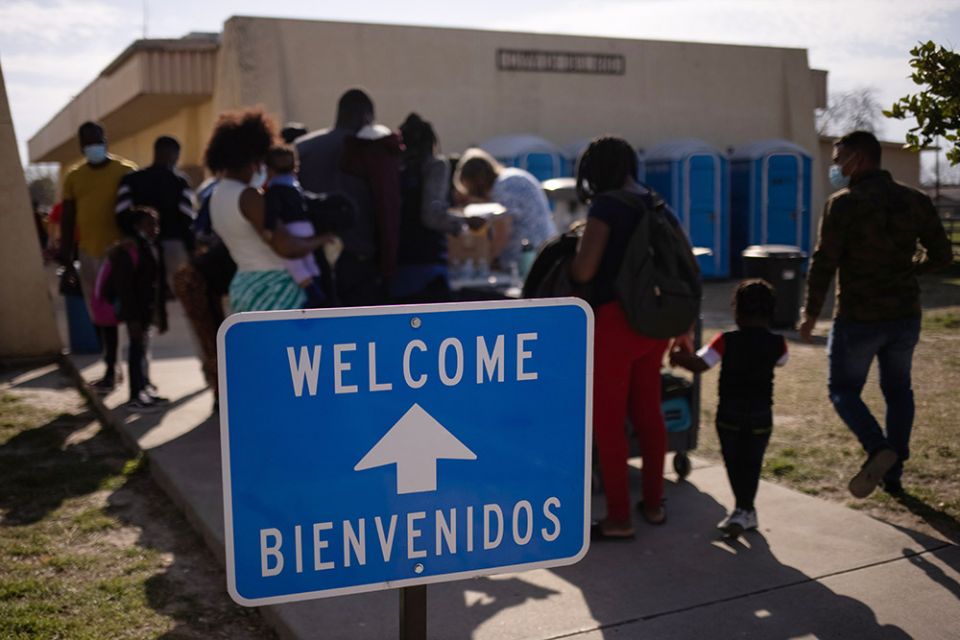 Migrants from Haiti wash clothes as they arrive March 21 at the Val Verde Border Humanitarian Coalition after being released from U.S. Customs and Border Protection in Del Rio, Texas. (CNS/Reuters/Adrees Latif)

The 19 Catholic Charities sites in California, Arizona, New Mexico and Texas have been challenged to care for incoming migrant families and children from Mexico, and the Leadership Conference of Women Religious has called on its members to offer a ministerial presence along the border as they can.

"As of now, Laredo, McAllen, Tucson, Yuma, San Antonio, and San Diego are facing significant numbers of arrivals, but that can change tomorrow," LCWR, which represents more than 80% of sisters in the United States, wrote in a newsletter. "Currently, the most urgent needs are volunteers who speak Spanish and financial aid to buy clothes for the children."

One congregation, the Franciscan Sisters of Perpetual Adoration, organized a team of sisters to serve in Tucson, Arizona, from April 26 to May 9 and is sharing their daily experiences on the congregation's website for others to follow along. The sisters will be working with Casa Alitas in Tucson and the Kino Border Initiative in Nogales, Sonora, Mexico.

"Anytime people are suffering, I would hope that we as a community would be attentive to that," Sr. Rose Elsbernd, spiritual director of the Franciscan Spirituality Center in La Crosse, Wisconsin, said to a CBS affiliate station that interviewed the sisters from the La Crosse airport as they departed. "And if we can help out in any matter, we should choose to do it."

Upcoming webinar on the legacy of Ursuline Sr. Dianna Ortiz

The Maryknoll Office for Global Concerns will host a webinar at 3 p.m. Eastern time May 5 to honor the human rights advocacy and legacy of Sr. Dianna Ortiz, an Ursuline Sister of Mount St. Joseph, Kentucky, who died of cancer Feb. 19.

A survivor of kidnapping and torture from her time as a missionary in Guatemala in the late 1980s, Ortiz went on to become an advocate for torture victims. The 30-minute webinar will look to what her legacy "can teach us about our call to stand with survivors of human rights violations and bear witness to the truth," according to the invitation. 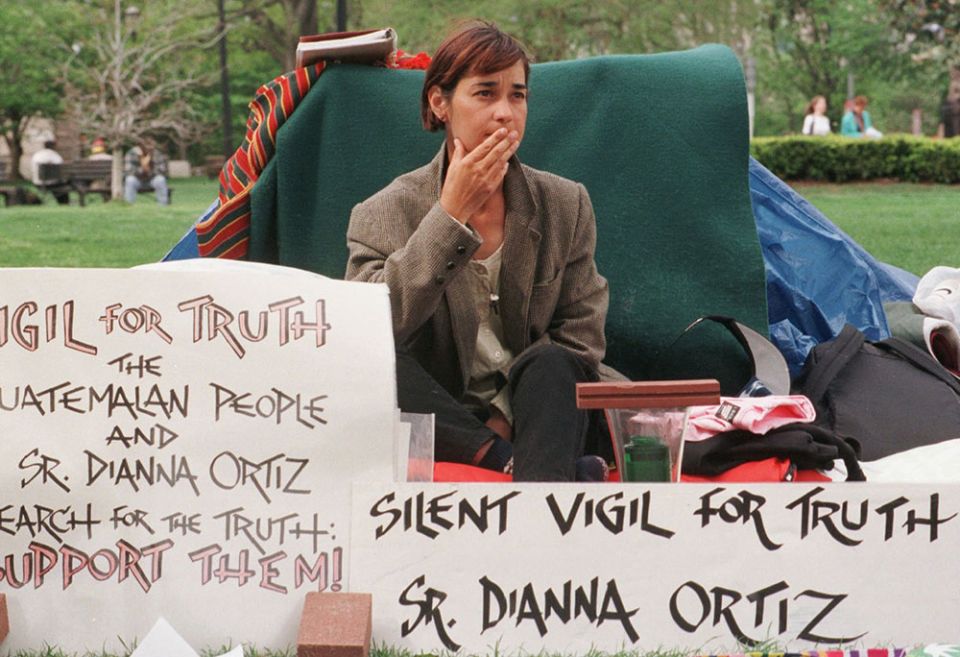 Ursuline Sr. Dianna Ortiz maintains her bread-and-water fast across from the White House in April 1996. She wanted U.S. officials to release information about her 1989 abduction and torture in Guatemala; eventually, some information was released. (CNS/Bob Roller)

Dan Moriarty, the program coordinator of Sustainable Pathways to Peace, will lead the presentation and take questions. Participants can register to attend on Zoom or watch live on YouTube.

By promoting the hashtag #SistersEmpoweringWomen starting April 28, the International Union of Superiors General is encouraging sisters and others to share photos of women "who inspire, through their commitment, and promote the values of fraternity and social friendship."

UISG, the global alliance representing approximately 600,000 sisters, is sharing the images through the hashtag as well as fairly new Twitter and Instagram accounts, @UISGVoice.

During lockdown in Mumbai, Sister Julie distributes food packages to families who survived on daily wages and now cannot travel to work. Sister Julie and her congregation are on the frontlines of one of the world's worst #COVID19 crises.#SisterhoodWorks pic.twitter.com/wx7uqPj1Ip

The campaign highlights sisters and ministries throughout the world, including a sister in Mumbai, India, who distributed food to families struggling to work in the pandemic; a sister who is a social worker in Warsaw, Poland, ministering to people experiencing homelessness; a sister in Benue State, Nigeria, who delivers water tanks to remote communities; and sisters in Goiânia, Brazil, who organize and deliver donations of food baskets, hygiene products, face masks and clothing.

Throughout the pandemic, Holy Spirit Missionary Sisters have continued their journey of care alongside refugee children and families. Around the world, #COVID19 has created additional challenges for people on the move 👣 #SisterhoodWorks #YouAreMySister pic.twitter.com/agkCx8ljv2

Throughout the #COVID19 pandemic, Missionary Sisters of the Holy Rosary have delivered water tanks to remote communities and vulnerable families. During a health crisis, access to clean water is more vital than ever 💦 #SisterhoodWorks #YouAreMySister pic.twitter.com/KL2XbPLn2M

The initiative runs through July 15.

Webinar on collaboration between communicators and leadership

A panel of communicators and members of congregational leadership will discuss successful collaboration on Zoom at noon Eastern time May 3. Communicators for Women Religious is partnering with UISG to "address optimizing communicator-leadership interaction in order to create a better understanding of each other's needs and goals and how to best advance the missions and ministries of women religious through communication."

Joining the chorus of U.S. congregations who responded to the guilty verdict of former Minneapolis police officer Derek Chauvin for the 2020 murder of George Floyd, the Ursuline Sisters of Toledo, Ohio, released a statement praying for "the beginning of a new chapter on healing and systemic change." 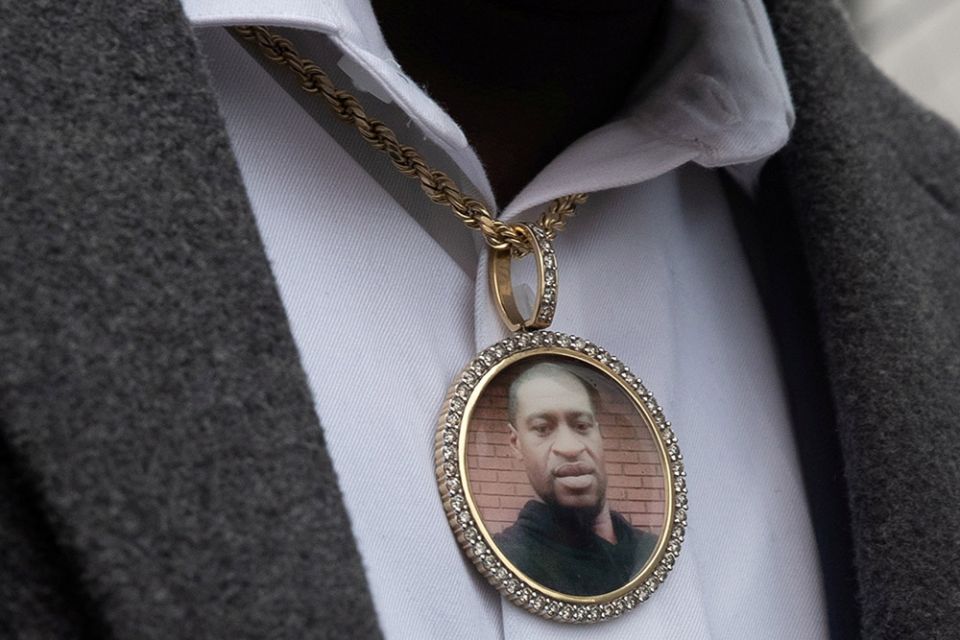 An image of George Floyd hangs from a necklace worn by a family member after an April 19 prayer session outside the Hennepin County Government Center in Minneapolis. (CNS/Reuters/Adrees Latif)

"We offer our prayers and our commitment to continue to focus on the critical work of recognizing racism as a systemic cause of injustice to Black men and women and all people of color," the statement said. "As women of faith we are committed to the life work of replacing an unjust and broken system with justice and equality for all human beings." The statement called on all Americans to stand in solidarity.

The congregation's leadership team "will continue to eradicate racism, White Privilege and all forms of prejudice and inequality," adding their prayers for a national transformation toward "liberty and justice for all Americans."