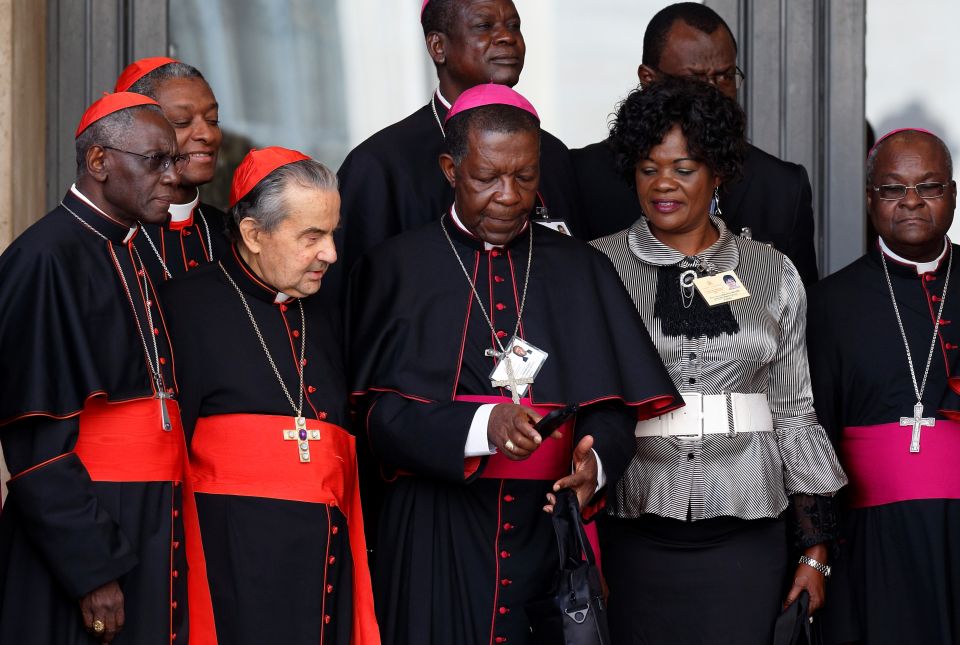 Bishop Nicolas Djomo, center front, stands with other bishops, cardinals and a lay auditor after an October 2014 session of the Synod of Bishops on the family. Djomo, recently retired bishop in the Diocese of Tshumbe, Democratic Republic of Congo, failed to follow Vatican guidelines in dealing with allegations of a 2020 rape of a 14-year-old girl by a diocesan priest, The Washington Post has reported. (CNS/Paul Haring)

Nicolas Djomo, a recently retired bishop in the Diocese of Tshumbe, Democratic Republic of Congo, failed to follow Vatican guidelines in dealing with allegations of a 2020 rape of a 14-year-old girl by a diocesan priest, The Washington Post reported in a major investigation that appeared as a front-page story July 15.

"The nuns, priests and the alleged victim who pressed Djomo about the accusations say he orchestrated a coverup that upended the life of the victim, kept his own reputation intact and absolved the alleged abuser within the church's own system," said the article, reported and written by Chico Harlan, The Post's Rome bureau chief, and Alain Uaykani.

After the priest dropped her off at the convent where she lived and studied with the Sisters Servants of Mary, Comforter of the Afflicted, the girl, now 17, told a sister that the cleric had raped her.

The sister then proceeded to follow "the new rule laid out by Pope Francis for handling such a report: She alerted her superior to a possible crime," The Post reported of the March 2020 incident. 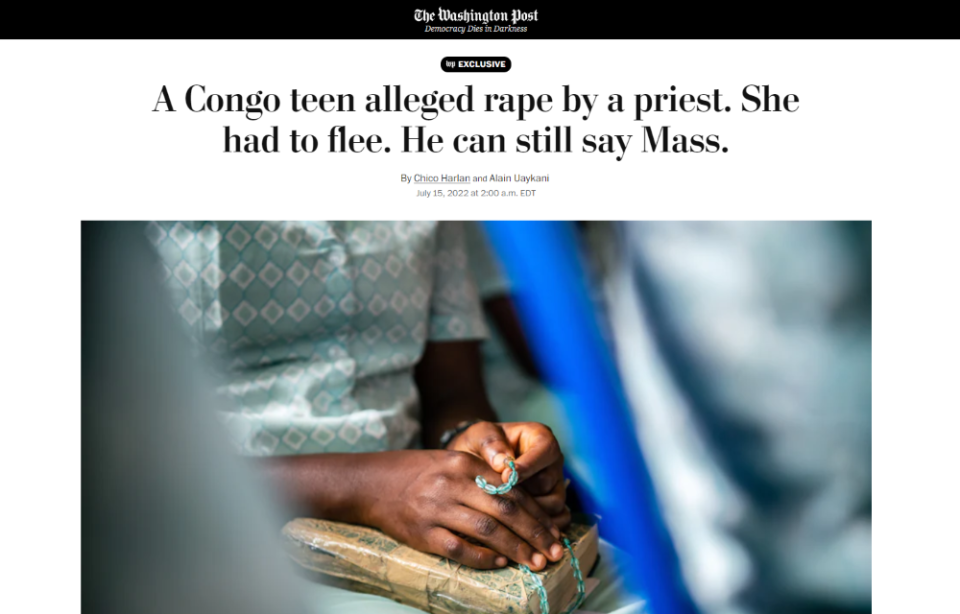 The Post reported that Francis recently accepted Djomo's resignation, noting that bishops are required to resign when they turn 75, though the Vatican often allows them to continue past that age. (Djomo turned 78 on July 3.) Following custom, The Post said, the Vatican has not said why the pope waited until June to accept Djomo's resignation.

The investigation says Djomo has demanded that those involved "stay quiet. Those include the nun who first informed him and, later, the alleged victim, who says he beseeched her in a one-on-one meeting to forgive the priest, an encounter that made her feel 'sick.' "

The investigation also noted that after the girl's uncle, a priest who worked for the bishop, "pressed ahead with a court case, Djomo offered him $15,000 — an enormous sum in a nation where most people live on less than $2 a day — to persuade his relatives to resolve the matter."

The uncle, Fr. Alphonse Okongo, said the family refused the offer and that, subsequently, his position was eliminated. Meanwhile, when "the nuns supported the girl, their founder says, Djomo retaliated by disbanding their association."

The congregation has since left rural Tshumbe and Djomo's diocese for Kinshasa, Congo's capital, The Post reported.

The report said that after the girl's family went to the police with the allegation, "Djomo did take at least one disciplinary measure, barring the accused priest, the Rev. André Olongo, from ministry and from having unsupervised contact with minors."

But the sanction, "implemented eight months after the alleged rape, proved to be short-lived." Earlier this year, the bishop sent his findings of the matter to the Vatican, though The Post reported that the diocese-run investigation "did not include an interview with the alleged victim."

Djomo told The Post that the Vatican had determined weeks ago there were insufficient grounds to show wrongdoing.

"He has been acquitted. It was absolutely false," Djomo told The Post, though the bishop declined to answer further questions and earlier did not respond to a list of queries about his handling of the incident, The Post reported.

He did tell The Post, however, that the cover-up accusations were false and accused Sr. Charlotte Ekumu, the congregation's foundress, of fabricating the allegations.

"I have documentation. You have nothing," Djomo told The Post. "Don't trust Sister Charlotte. Trust the bishop."

The Vatican told The Post that its Dicastery for the Doctrine of the Faith had "been able to deal with this case based on the evidence that was provided to it" and had determined it could not "proceed any further," The Post reported.

"Should further, certain evidence be supplied by civil authorities, by the accusers, or by other witnesses, it would unfailingly be taken into due consideration," the Vatican's statement said.

Olongo, the accused priest, declined to speak to The Post. His attorney said the priest says he is innocent of the charges.

The girl is still preparing to become a member of the congregation. However, The Post report says that the girl "feels recurring stomach pain and panics because she fears she'll be prevented from becoming a nun since she is not a virgin." 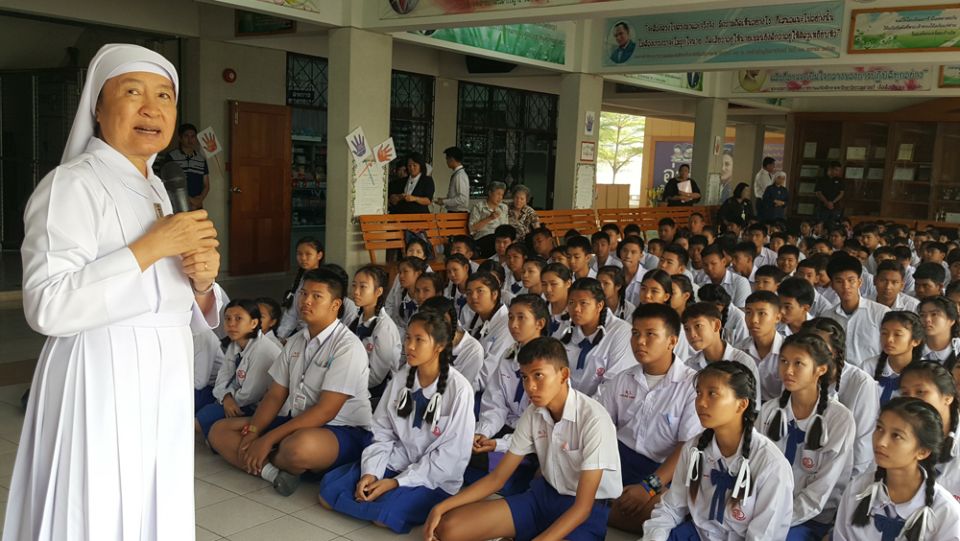 Sr. Kanlaya Trisopa, a member of the Sacred Heart of Jesus of Bangkok, coordinator of Talitha Kum Thailand and early leader in anti-trafficking efforts, gives a presentation to students to raise awareness about the dangers of trafficking in February 2017. (GSR photo/Gail DeGeorge)

As many as 26,065 Asian women may have been spared the fate of human trafficking in 2021 through the efforts of the sister-led ministry Talitha Kum, says the network's Asia director.

One new effort starting in 2021 included the launch of a Talitha Kum Anti-Trafficking Youth Ambassadors program "to engage more young people with the vision and mission of Talitha Kum. Young women and men, representing ten countries in Asia, were trained to be anti-trafficking youth ambassadors among their peers at the grassroots level," Avelino said.

Avelino told the information service that the challenges of human trafficking in Asia have been exacerbated by multiple socioeconomic challenges, ranging from ongoing economic problems caused by the global pandemic to political crises in Myanmar, Sri Lanka and Pakistan.

"Crisis like these increase the number of people who become vulnerable to trafficking, particularly women, girls, young people, migrants, and refugees," she said. 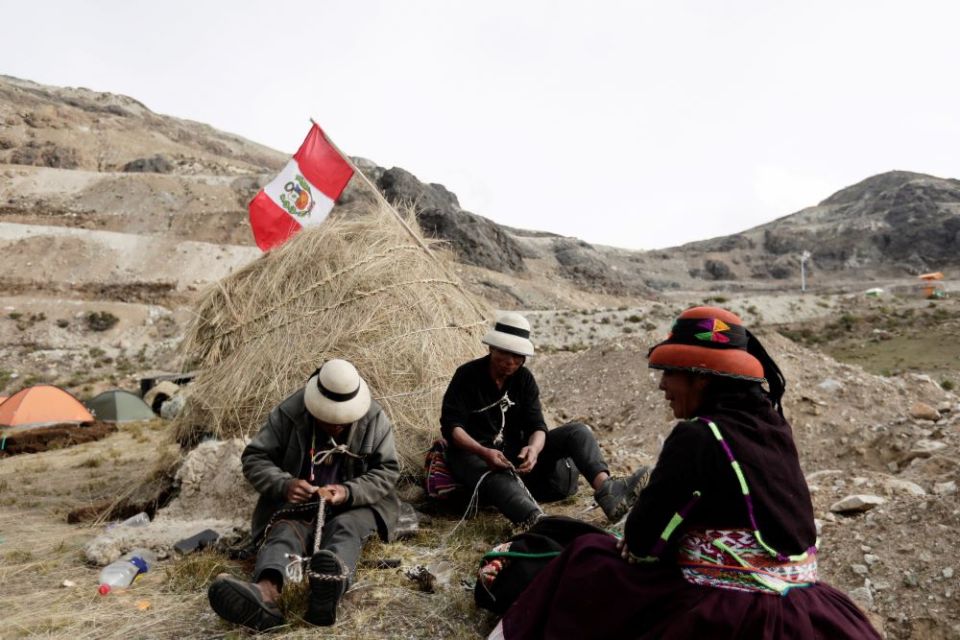 Members of Indigenous communities camp on the property of Chinese-owned Las Bambas copper mine in Peru on April 26. (CNS/Reuters/Angela Ponce)

Georgetown University's Berkley Center for Religion, Peace and World Affairs will host a July 29 webinar with the theme "Extraction and Exploitation: The Effects of Mining on Religious Communities."

The webinar will feature the work of photographer Alessandro Cinque, who has "documented the devastating impact of extractive practices on local communities as well as the effects of climate change on Indigenous peoples and their lands," an event announcement said.

It adds that Cinque, with journalist Vidal Merma Maccarcco and "support from the Pulitzer Center on Crisis Reporting, has been working among Peruvian communities in the Andes, capturing what mining pollution and climate change do to people, crops, and animals."

The July 29 webinar will feature Cinque and Merma discussing their reporting on extractive industries in Peru and the effects the local industries have had on cultural and religious practices, including religious communities.

The event is co-sponsored by the Berkley Center and the Georgetown Americas Institute in collaboration with the Pulitzer Center on Crisis Reporting.

More information on the webinar is available here. 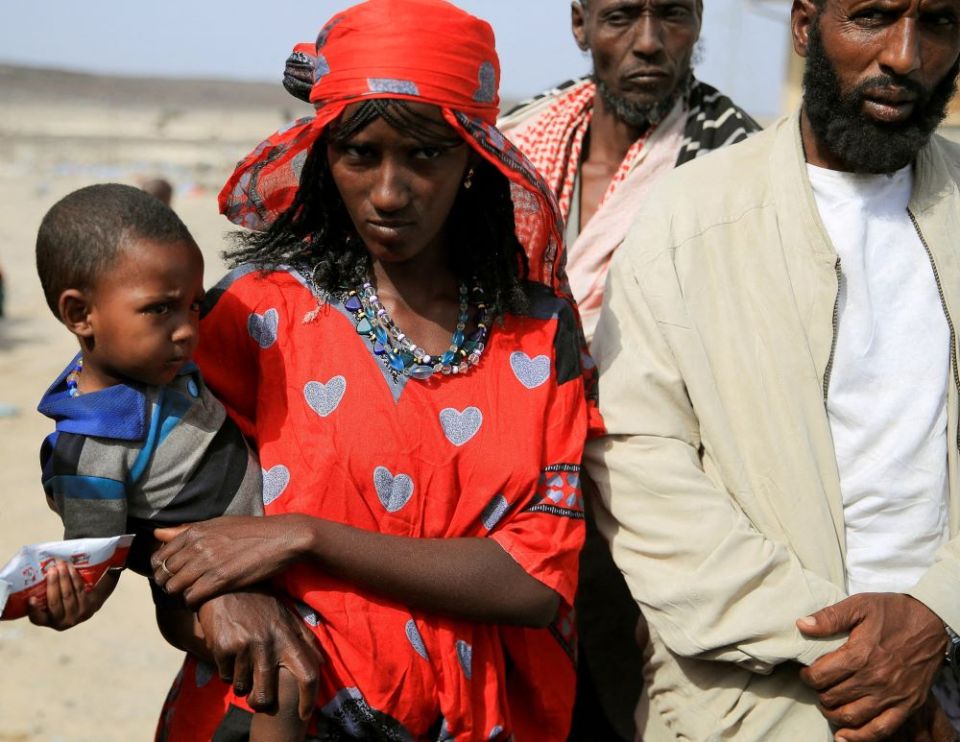 People who fled their homes because of fighting between the Afar Special Forces and the Tigray People's Liberation Front in Berhale, Ethiopia, wait for food near a makeshift compound in Afdera district Feb. 23. (CNS/Reuters/Tiksa Negeri)

UN: An 'unprecedented opportunity for Africa to step up'

Africa still faces challenges in achieving the United Nations' ambitious sustainable development goals, though U.N. officials gathered for a one-day meeting July 20 said there is still reason to be optimistic about the continent's future. 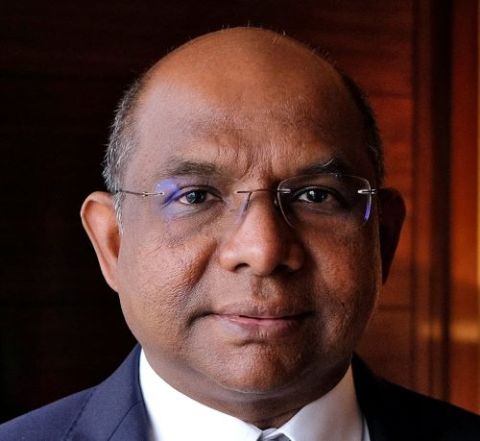 "Africa today is a region that has adopted and pursued a transformational agenda towards sustainable development, and is chartering a path towards prosperity, unity, peace, and integration," said Shahid, a senior diplomat from the Maldives.

Participants said Africa faces the same challenges others do at the current moment — such as the global pandemic, climate change, and the fallout from the Ukraine war in the form of rising food and fuel prices — but continues to face unique vulnerabilities, such as the legacy of colonialism and challenges related to economic development, peace and security. 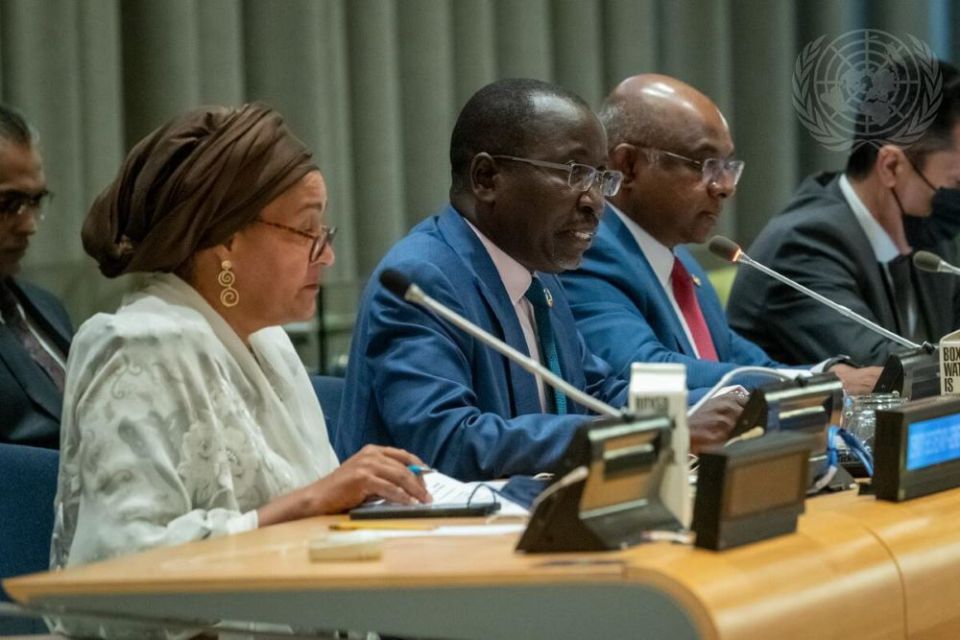 Diplomat Collen Kelapile, the president of the U.N.'s Economic and Social Council and co-organizer of the session, called for "collective action and international solidarity to address the looming threat of food insecurity and famine [and] the impacts of the Ukraine war on energy and the economy."

"The silver lining here is that there is an unprecedented opportunity for Africa to step up to these challenges, speed up its industrialization and economic diversification, and integrate itself further upstream in global supply chains through increased value addition at source," said Kelapile, quoted by the U.N. news agency.