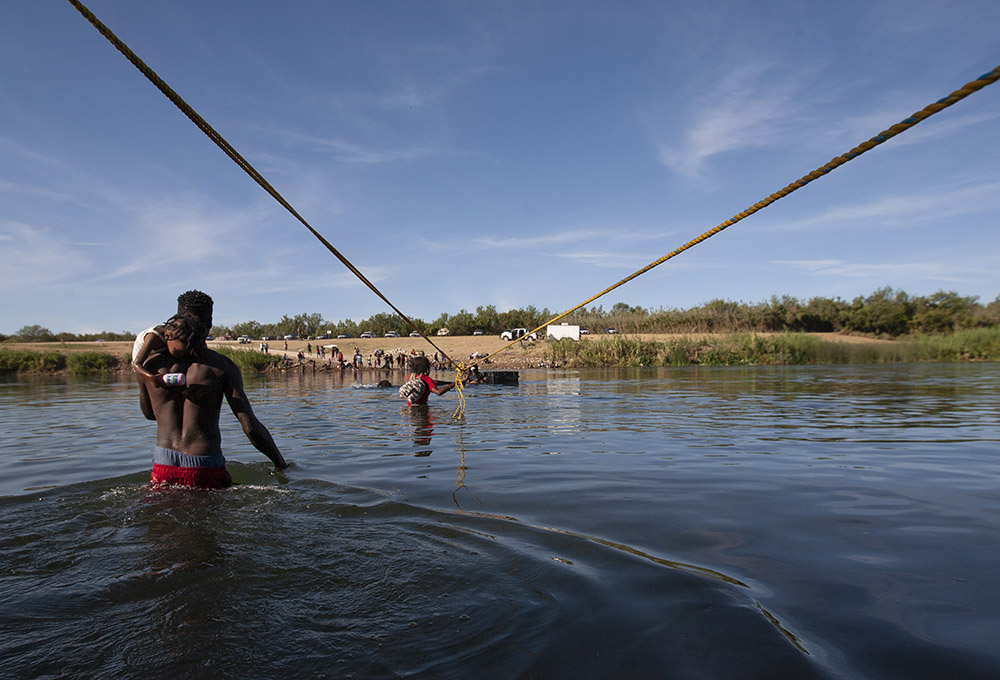 Haitian immigrants make their way along a rope suspended above the Rio Grande on their way to the United States Sept. 22. (Nuri Vallbona)

Clusters of Haitians stood on the riverbank, removing tennis shoes, putting belongings in garbage bags and hoisting children on their shoulders. The waters of the Rio Grande had risen, and the current was gaining momentum. As they plotted their path, they found an unlikely ally that could potentially lead to a better life in the United States: a yellow rope.

The migrants clung to the nylon cord as they forged the river's chest-deep waters between Ciudad Acuña, Mexico, and Del Rio, Texas, on Sept. 22. Ignoring a row of law enforcement vehicles and a Humvee lined up along the U.S. shore, the procession of immigrants continued toward the international bridge where an estimated 15,000 had once camped, overwhelming immigration officials in the tiny town of Del Rio.

"There was food and shade on the Mexican side, but their dream was to be free in the U.S., so it was like, 'Oh, my goodness, this is terrible that we have this whole blockade up,' " said Sr. Ursula Herrera, a Benedictine Sister of Boerne, Texas. "People are just seeking a better life for themselves, for their children, and here, they are so close and yet so far." 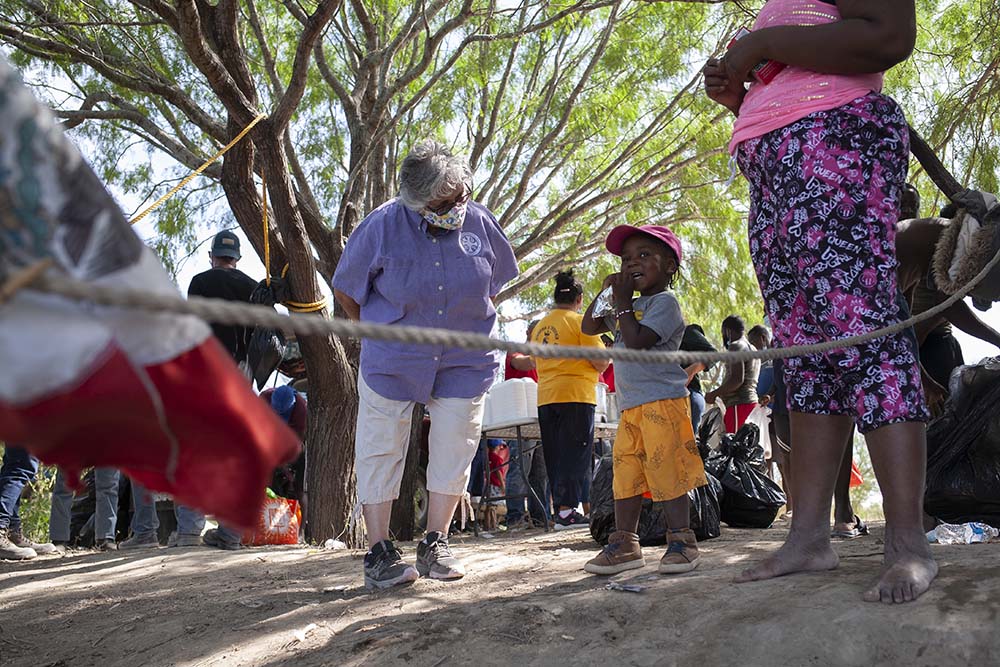 Sr. Ursula Herrera banters with a 2-year-old Haitian boy who is watching his father wade through the Rio Grande toward an immigration camp in Ciudad Acuña, Mexico, Sept. 22. His father had crossed the Rio Grande alone to check out the current before he returned to pick up his son and the child's godmother, right. (Nuri Vallbona)

Recent images of immigrants crammed under the international bridge, and officers on horseback trying to grab and corral them drew outrage across the political spectrum. The threat of deportation left many migrants in limbo, too afraid to take their chances with the asylum process but stuck in Mexico without work permits or a means to support themselves.

As the number of Haitian arrivals at the border swelled, Catholic sisters, religious organizations, nonprofits and churches banded together with a common goal: provide basic services and restore human dignity.

"If God has allowed these different religions, then we need to support each other. Therefore, it doesn't matter what your religious beliefs are. We are all God's children. We were all created equal, so we need to treat each other with respect," Herrera said.

On the Mexican shore, other Haitians, aid workers and journalists stood watch over those who ventured into the Rio Grande. When one man swam downstream to rescue a bag that floated off with the current, the crowd gasped. His struggle to return to the rope was fruitless. As he emerged from the bushes further down, sighs of relief arose. 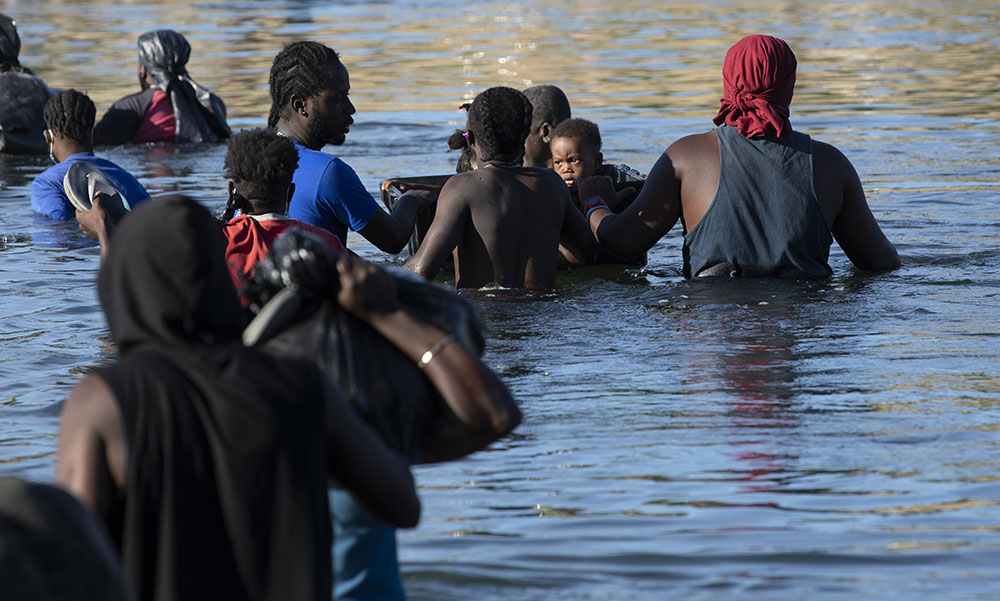 A child floats across the Rio Grande in a container to keep him safe with other Haitians wading from Ciudad Acuña, Mexico, to Del Rio, Texas, Sept. 22. (Nuri Vallbona)

"I always think, knowing the sacrifices they're going through, they still want something better for their children, and they're willing to sacrifice their own lives just to get their children over here where they feel they can have a better life," Herrera said from her home in Eagle Pass, Texas.

The sister joined a team of volunteers from Casa Hogar Getsemaní, a Baptist orphanage in Morelos, Mexico, on Sept. 22 to pass out lemonade and more than 130 plates of hot dogs, rice, beans, tortillas and pork stew to the migrants milling around an immigration camp in Ciudad Acuña.

The call from the orphanage's director, Paulina Bivens, came amid a tragic week for Herrera, who lost her friend and fellow Benedictine sister Germaine Sutton after a stroke days before.

"I just feel that if God is calling me to do something, he's going to provide me with the means and the time," Herrera said.

Throughout September, Matt Mayberry, a pastor at the Southern Baptist City Church Del Rio, said he was inundated with calls from churches across the country offering to support his congregation's efforts to feed those camped under the bridge. He estimated volunteers handed out more than 16,000 sandwiches and numerous snacks to immigrants and border officials until the federal government stepped in to provide food Sept. 15.

Members from one Baptist church drove four and a half hours to deliver their sandwiches, Mayberry said.

"Our understanding of Scripture is that we were made in God's image — all humans," he said. "And so, regardless of our ethnicity or nationality, every human is worthy of human dignity and value. Our church and all the churches who have joined us believe the same thing."

Herrera and Bivens' volunteers were among dozens of aid workers feeding several hundred Haitians who were able to spread out under trees across large fields of open space in Ciudad Acuña, a contrast to the thousands who had sheltered across the river under the Del Rio bridge.

All who were interviewed said they had traveled from either Brazil or Chile, where many Haitian expats tried to make a life amid political turmoil at home. The trek to the U.S.-Mexico border took between one to three months by bus and on foot. But soon after arriving, the migrants faced a new threat: deportation.

Around 4,000 Haitians have been deported from the United States in the last two weeks, Alejandro Mayorkas, secretary of the U.S. Department of Homeland Security, told CNN on Sept. 26. His department estimated that 30,000 had been processed in Del Rio since Sept. 9 and that 8,000 returned voluntarily to Mexico. Currently, no migrants are camped under the international bridge.

After hearing expulsions were possible, some migrants had second thoughts about taking the final step across the river. 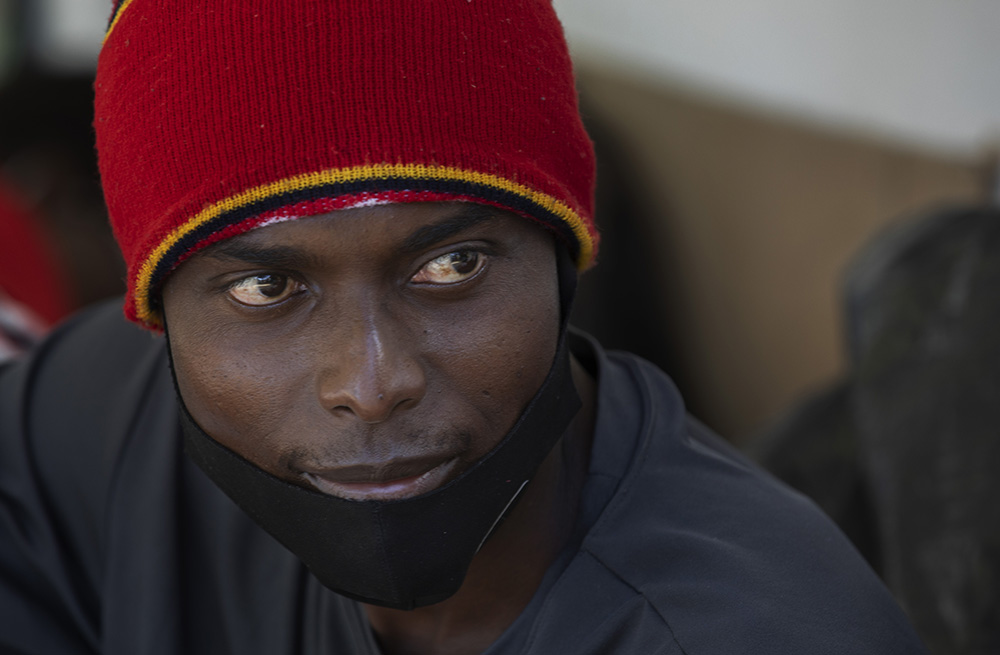 Fredelin Jean at an immigration camp in Ciudad Acuña, Mexico, on Sept. 22. Jean spent three months traveling from Brazil to the U.S.-Mexico border after three years in Brazil, where he had trouble finding work. His fears of being deported back to Haiti have led him to seek Mexican work permits so he can remain in that country. (Nuri Vallbona)

"I'm afraid to go back to Haiti," Fredelin Jean said, leaning against the wall of a small structure that provided shade to a few of his friends. About 10 cellphones sat charging a few feet away. "Right now, Haiti is going through a difficult situation: the earthquake ... political problems. I was in danger every day."

In Haiti, Jean was an elementary school teacher who taught English, Creole and French. He later moved to Brazil for three years, but the lack of work permits kept him from finding a similar job. Tired of the stress, he and his friends headed to the United States, spending around $6,000 each to travel by bus and on foot just to reach the U.S.-Mexico border.

"There were thieves. There were women that had been whipped by thieves because they didn't have money," he said, adding that women had also been raped. "A lot of my friends saw a lot of dead people."

Jean said he wanted to have legal status and hoped he might be able to do that in Mexico. Others had the same idea: Nearby, nearly two dozen lined up to speak to a worker from the Comisión Nacional de los Derechos Humanos, the National Commission for Human Rights, hoping she could help them secure Mexican work permits. 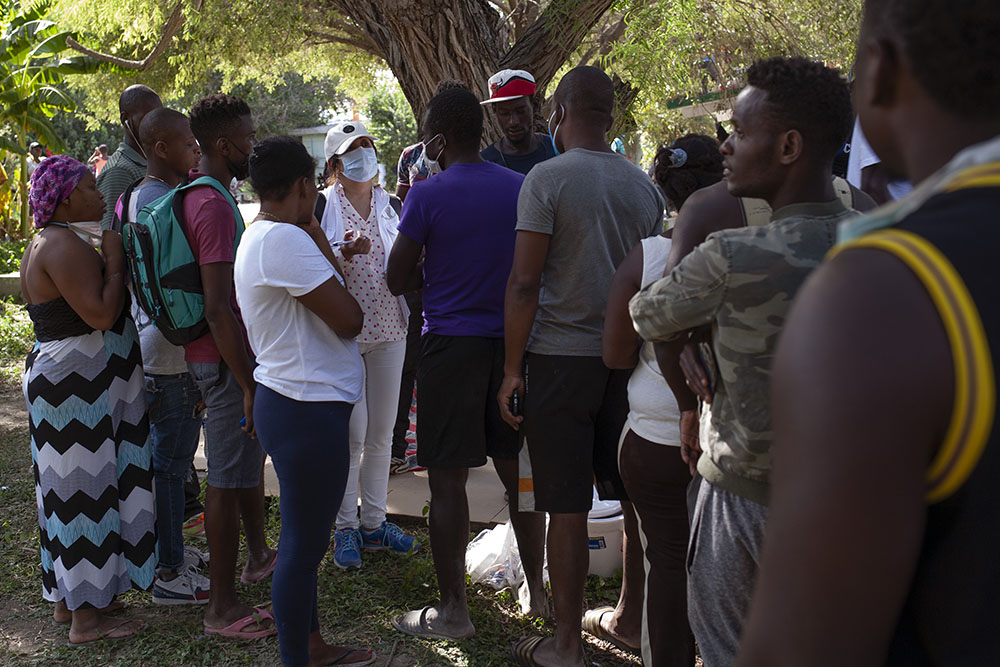 A worker for the Comisión Nacional de los Derechos Humanos, Mexico's National Commission for Human Rights, tries to get a sense of how many Haitians want Mexican work permits at an immigration camp in Ciudad Acuña, Mexico, Sept. 22. Although many migrants crossed the border into Del Rio, Texas, some decided to stay in Mexico for fear of being deported back to Haiti if they tried to cross into the United States. (Nuri Vallbona)

When about 400 Haitians arrived on foot at San Fernando, Tamaulipas, Mexico, on Sept. 17, Fr. Francisco Gallardo, a Catholic priest and director of the Casa del Migrante shelter in Matamoros, Mexico, drove almost two hours south to meet them. There, he and Juan Sierra, a lay assistant, joined ministers from other faiths to guide the caravan as it came to a fork in the road, hoping to avoid a repeat of the August 2010 mass killing of 72 immigrants in the town.

As the group neared Reynosa, Mexico, the next day, Gallardo alerted the news media and met them at the town's immigration checkpoint to facilitate the group's passage into the border town, Sierra said.

"The whole process was reported live [in the media], so then, the authorities felt forbidden to confront the Haitians," Sierra said. "We convinced the entire caravan not to be aggressive — to pass with joy, yes, but with respect. "

Sr. Norma Pimentel, executive director of Catholic Charities of the Rio Grande Valley, regularly visits thousands of Haitians sleeping in the plaza in Reynosa. The Missionaries of Jesus sister praised the way pastors from local evangelical churches and the Catholic Church were working together to find housing for the town's newest residents because they were more vulnerable to crime.

At a Sept. 23 public hearing for the Homeland Security and Public Safety Committee of the Texas House of Representatives, Pimentel called for the state and federal governments to support the community's efforts to make sure immigrants were treated with dignity and respect.

"Families are coming here because they are afraid for their lives, especially of their children," she said. "They're looking not for a better life, but just life. They want to be safe."