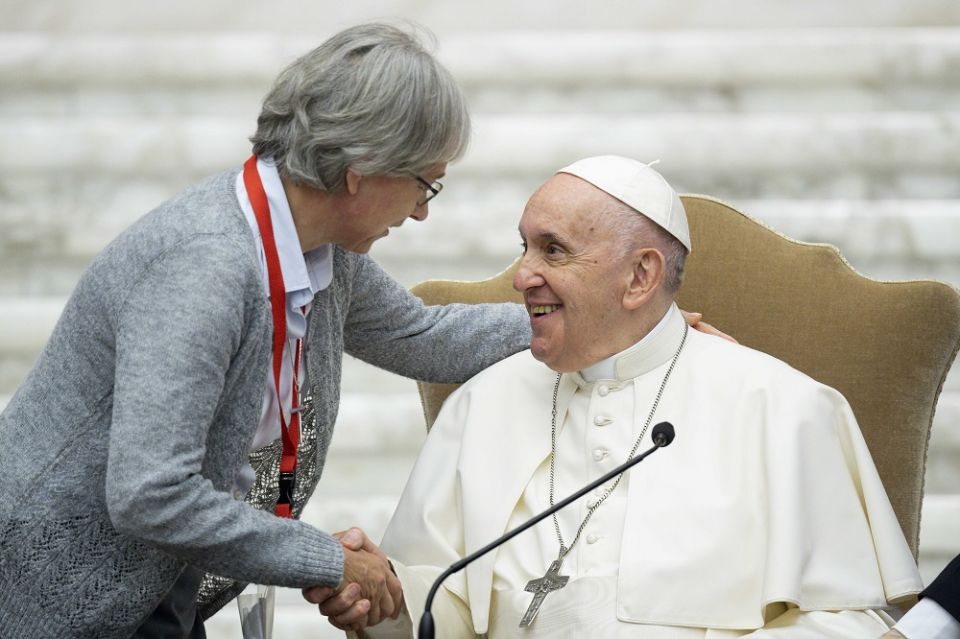 Pope Francis greets Claretian Missionary Sr. Jolanta Kafka, president of the International Union of Superiors General, during a May 5 audience with participants in the plenary assembly of the union at the Vatican. (CNS/Vatican Media)

In an informal hourlong discussion May 5 in which Francis welcomed questions from leaders attending the plenary of the International Union of Superiors General, the pope warned against congregational renewal that is "frozen in time," that looks to the past and does not look forward.

"The church does not want frozen nuns. That's useless," he said to applause. "The challenge is that consecrated life has to be integrated into a church — not a frozen church, but a real church."

At several points, the pope compared religious congregations to trees, saying they must grow while always requiring sturdy roots, and urged the sisters to continually look at what inspired and stirred their original founders.

"What was their original inspiration?" Francis said in a theme he repeated several times. "What was the essential part?"

At the same time, Francis compared religious congregations to families and said, "You can't modernize anything without the family spirit."

Francis, meeting the women religious at the Paul VI Audience Hall at the Vatican, spoke while seated and entered the hall in a wheelchair, a sign of the pope's ongoing problems with a torn ligament in his right knee. It was the first time the pope has used a wheelchair publicly at the Vatican, Catholic News Service reported. 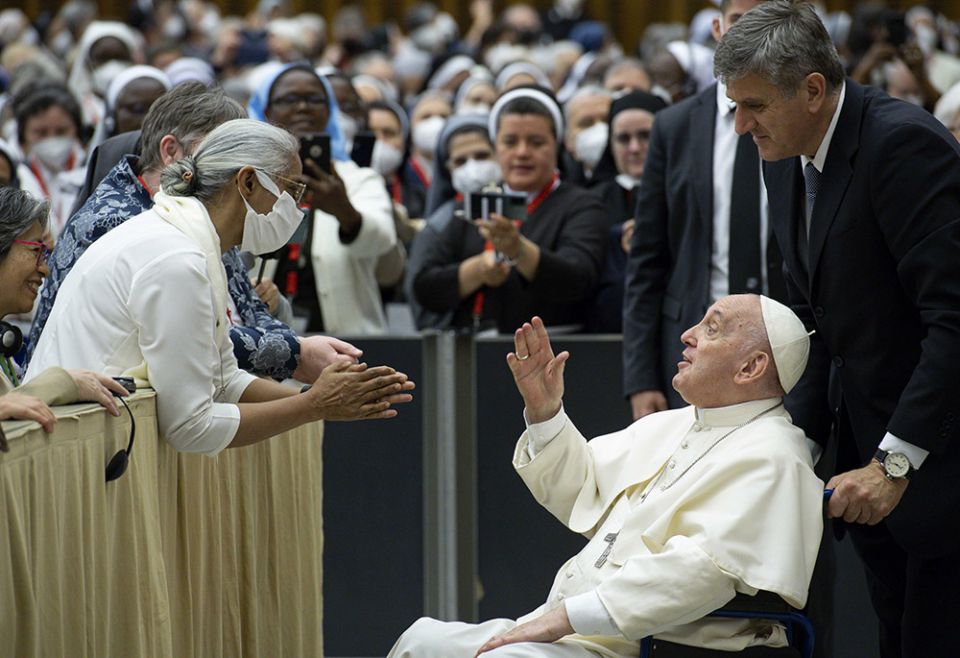 Pope Francis is pushed in a wheelchair by his aide, Sandro Mariotti, as he greets participants May 5 in the plenary assembly of the women's International Union of Superiors General at the Vatican. (CNS/Vatican Media)

But the pope seemed otherwise in good health. He opted to forgo reading from nine pages of prepared remarks and instead took questions from the religious leaders on a host of topics, including the war in Ukraine.

While speaking of the need for the "noble way of peace," he said the outside world must accompany Ukraine in its current pain and acknowledged that many Ukrainians can't see any other path right now in the face of a war he called a "monstrosity."

Sr. Jolanta Kafka, UISG president and general superior of the Claretian Missionary Sisters, addressed some of these global issues when she told the pope that the sisters are concerned about wars everywhere, including the Democratic Republic of Congo, Syria and Yemen.

"In the midst of darkness, we [can] bring light and hope," Kafka said of the concerns and ministries of sisters in the world.

Francis recalled how, when he was hospitalized following surgery at age 21, he hated when visitors came to his hospital room and offered solace with such comments as "God is good." 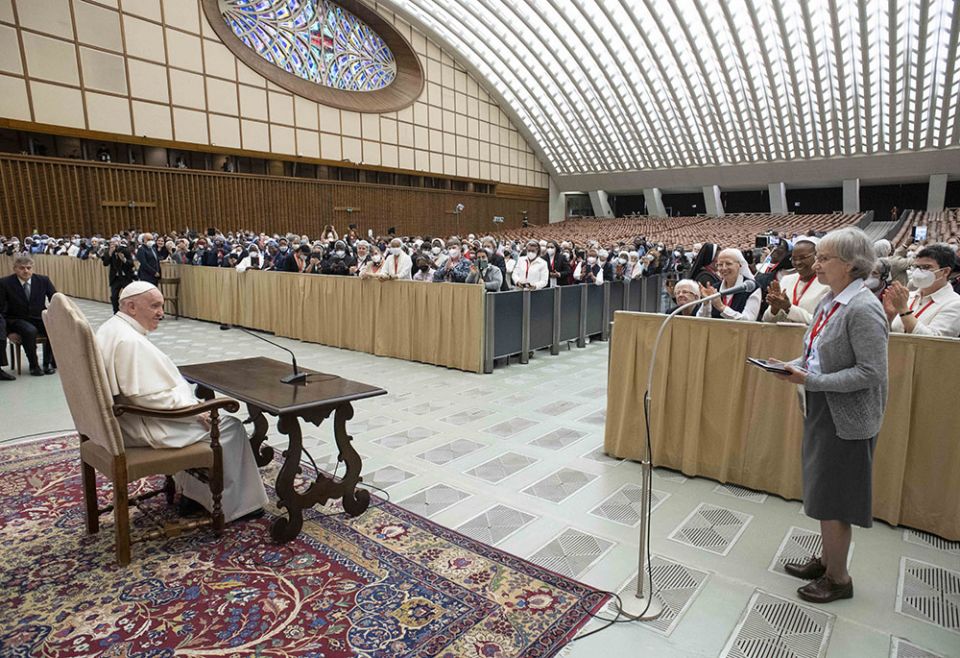 Pope Francis listens as Claretian Missionary Sr. Jolanta Kafka, president of the International Union of Superiors General, speaks during a May 5 audience with participants in the plenary assembly of the UISG at the Vatican. (CNS/Vatican Media)

Francis also spoke of the ongoing colonial legacy in such war-torn countries as the Democratic Republic of Congo, condemning colonialism and neocolonialism as a "political expression of a spiritual reality" that he called "evil" and the "work of the devil."

"The devil is the main colonizer," he said, adding that internal wars in countries such as the Democratic Republic of Congo or Syria "come from the spirit of Cain."

More than 700 leaders of women religious congregations are participating in the plenary, which runs May 2-6 and has focused on the core themes of vulnerability and synodality.

Francis' appearance before the Catholic sisters did not contain the same kind of dramatic gesture he showed at the UISG's 2019 plenary, when the pope asked UISG's then-president, Sr. Carmen Sammut, to be seated right next to him. However, Francis warmly commended the sisters for their service to the world and to the church.

That symbolism was particularly important at the time, when a long-anticipated report about women deacons was presented to UISG. The organization had raised the question to Pope Francis in 2016, reflecting the reality of women religious ministering to people on the margins, who often lack access to priests and deacons. Being able to serve as deacons would enable the sisters to minister more effectively, they said. Francis convened a commission that later dissolved without reaching a consensus about the role of women deacons in the early centuries of Christianity. He turned the report over to UISG, which has yet to release it.

In a May 2 interview with Global Sisters Report before the plenary, Kafka said the report had been given to UISG as "a courtesy."

"It was not complete, and of course, since it was the work of the commission, we didn't feel like we were in charge of its publication," she said.

The pope has since established a second commission, which is currently meeting, but Kafka said UISG is not directly following that commission's work and would not release the first report while it was meeting out of respect.

"Thank you for everything you do," Francis said, asking the sisters to "pray for me, not against me" — an apparent reference to criticism and resistance within the church for reforms he is seeking.

Sisters attending the event praised Pope Francis for his humanity and for his words of support for the sisters' example, faith and ministries.

"This feels like we're a part of something special," said Sr. Jean Bessette, president of the Sisters of St. Francis of Mary Immaculate in Joliet, Illinois, also known as the Joliet Franciscan Sisters.

The goodwill toward Francis has been evident in the first four days of the plenary, in which numerous speakers and sisters have spoken of support for the pope's vision of a synodal church that affirms diversity and listening, is more welcoming to those on the margins and tries to bring the church back to its early roots.

Typical of the comments at the plenary were those of Sr. Nathalie Becquart, a member of the Xavière Sisters in France and an undersecretary of the Synod of Bishops, who said May 4 that a "synodal church is a listening church and a synodal church is a learning church, a church in which we are learning from one another."

Becquart's February 2021 appointment by Francis as the first woman to serve as an undersecretary of the Synod of Bishops was seen as a milestone for the church.

At the moment, the church is in a "listening phase" as religious congregations, parishes and other groups grapple with what a synodal church might look like, part of a process leading up to the Synod of Bishops on synodality in 2023.

This story was updated May 5 at 1:50 p.m. CST to include comments from Kafka about the report on women deacons.