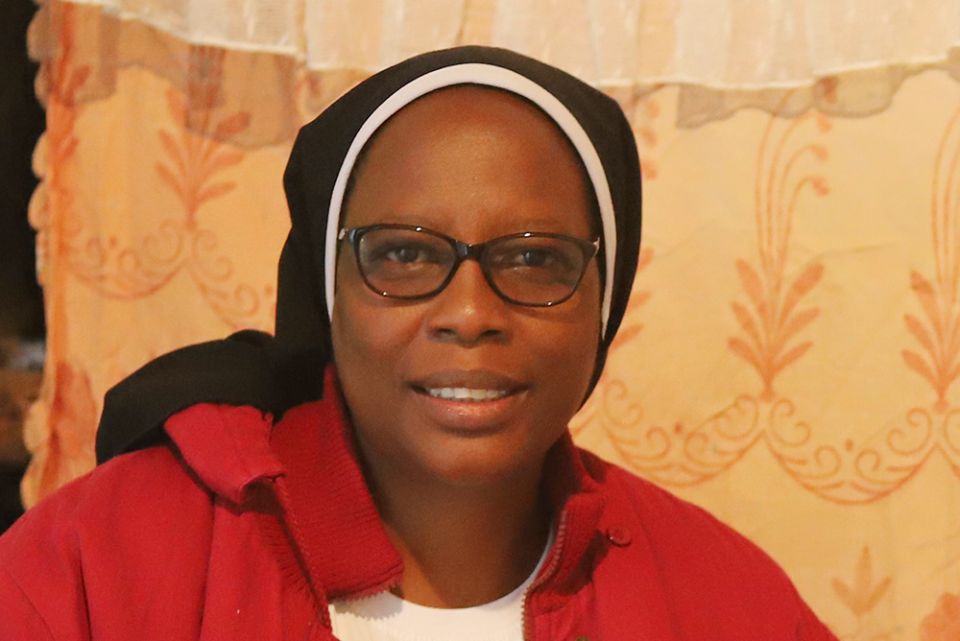 NAIROBI, Kenya — As Kenyans heads to the polls today, Aug. 9, to vote for their preferred presidential candidates, Sister Mary Magdalene is praying for peace during and after the vote to avoid violence witnessed in previous elections, especially the 2007 election, which left more than 1,300 people dead and 660,000 displaced.

Sister Mary Magdalene, a member of the Incarnate Word Sisters-Kenya, has become a hero for championing peace campaigns in slums around Nairobi, the country's capital, to ensure harmony and peaceful coexistence before, during and after the elections.

"I hope that the elections will be peaceful," she said. "I still have fears, given the experience where people were killed and injured, and we were supposed to help the affected families."

In addition to electing a president, Kenyans will also vote on a county governor, senator, member of Parliament, woman representative, and member of the county assembly. The two front-runners for the presidency are Raila Odinga of a coalition political party, the Azimio-One Kenya Alliance, and deputy president William Ruto of the United Democratic Alliance party.

Sister Mary Magdalene, a former country coordinator for the Justice and Peace Commission of the Association of Sisterhoods of Kenya, has been visiting slums like Kibera and Kawangware, where there has always been widespread violence during elections, to spread the message of peace and educate residents on the importance of voting and choosing good leaders. 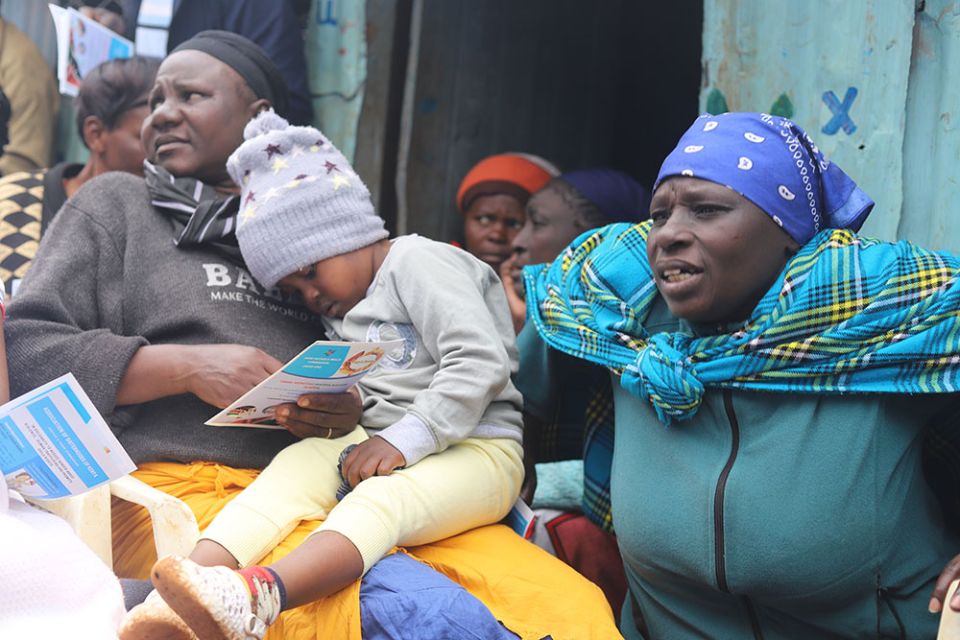 Residents of Kawangware, a low-income residential area in Nairobi, attend the sisters' education and peace campaign sessions on July 22. Religious sisters are carrying out civic education across the country to ensure people are knowledgeable about their voting rights and the importance of staying nonviolent during elections. (GSR photo/Doreen Ajiambo)

She has been visiting the slums weekly to meet youths, women, men and community leaders, urging them to remain united during and after the polls, be ambassadors of peace, and reach out to more people across the country.

Sister Mary Magdalene said the fear that violence could erupt during elections has always disrupted sisters' ministries in the slums and other parts of the country, leaving vulnerable people at risk of failing to get food, medicine, accommodation and other essentials. In Kibera, for example, sisters are forced to suspend programs meant to assist poor women with food, money to start businesses, and evangelization, the nun said.

"During elections, we have always suspended our ministries meant to educate children and assist vulnerable people, including children and older people and women who are poor," she said. "I hope the violence will not occur in this election because we have carried out enough peace initiatives to avert violence before, during and after the polls." 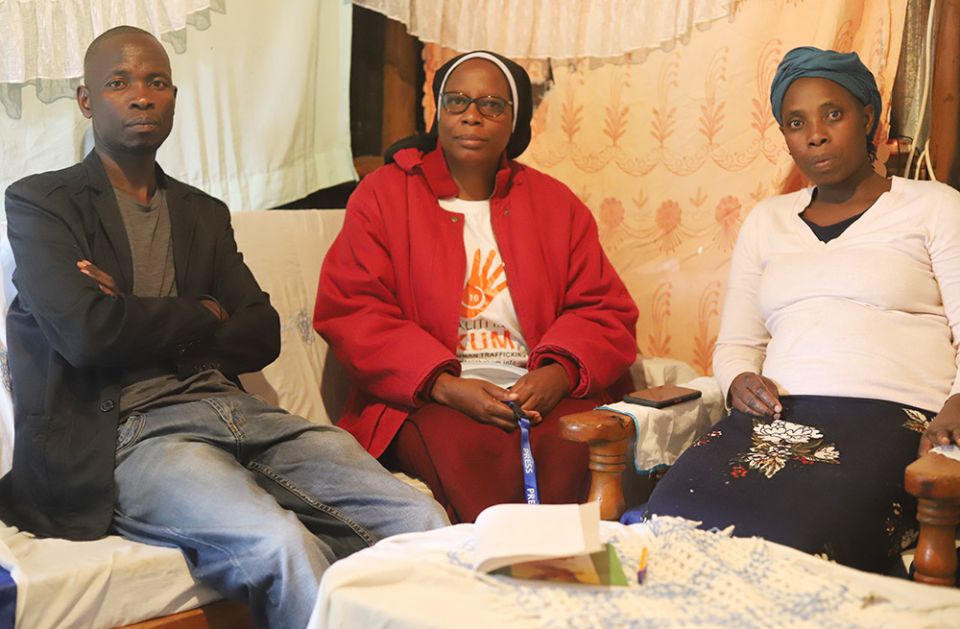 Sr. Mary Magdalene, a member of the Incarnate Word Sisters-Kenya, visits William Monda, 37, and his sister Florence Bosibori in their house in Kibera, the largest slum in Kenya. Monda, like many people injured during the 2017 presidential elections, had decided not to vote again. However, the sisters educated and sensitized them on the importance of casting their votes. (GSR photo/Doreen Ajiambo)

Besides promoting peace and instituting measures that stop violence, Sister Mary Magdalene and other sisters from her congregation and others also respond to violence by helping families and people affected by post-election violence. They help families with food, shelter, clothes, medicine, counseling, education and other essentials.

"We have come out to support those injured during the violence and feed the hungry families. Women and children bear the burden of it all, and trauma is evident and fresh," she said. "It's not something I would ever wish to repeat in Kenya. Let's keep peace and love one another."

Sister Mary Magdalene is also empowering women in the slums through table banking to boost their incomes, end poverty and improve livelihoods as they unite them during their monthly meetings so that there could be lasting peace.

According to the Borgen Project, table banking is "a group-based funding strategy in which members form groups where they can save and borrow money immediately during meeting times. The objective of the strategy is to help the poor, particularly women, fight poverty and stay financially sound."

Sister Mary Magdalene said each group has 60 women, and each contributes as little as 50 cents. The women are encouraged to take loans with the interest earned from their group's contributions and start their businesses. She said they teach women how to make money, empower themselves and save.

She noted that the program has people from different religions.

"We introduced interreligious meetings with women, especially where Muslims are predominant. We formed support groups for these women, and they are now functional," she said.

"Through these meetings, the women become friends because they cannot give their money to an enemy. Their effort to meet each other proves their dedication, and we believe that friends cannot harm each other," she added.

GSR: Tell us about your ministry of peace-building.

Sister Mary Magdalene: I started working as a peace champion in 2012. Toward the end of 2019, I was elected the country coordinator of the Justice and Peace Commission formed by the Association of Sisterhoods of Kenya in 1999. 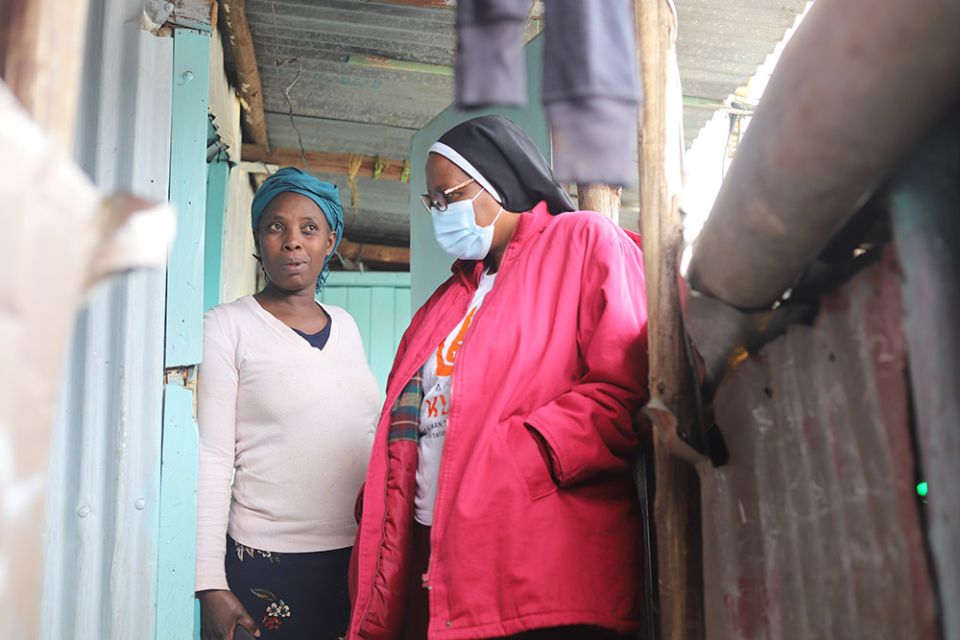 Sister Mary Magdalene, a member of the Incarnate Word Sisters-Kenya, visits the Kibera slum in Nairobi to carry out peace campaigns and civic education to ensure peaceful elections and that people to come out and vote for their preferred presidential candidate. (GSR photo/Doreen Ajiambo)

I started my work by educating members of the community about peace. We then involved schools. We trained teachers in different schools, and they were tasked with the responsibility of educating the schoolchildren. Our training took place in all the Catholic dioceses in Kenya.

We trained women mostly because we believe that a woman is the source of peace in every aspect. Women are the ones who have children, and the boys who run these battles are all sons of the women and the husbands of the women.

Women are the ones who are affected the most when violence happens. Some are left to be widows. Others are sexually abused and end up with babies from unwanted pregnancies.

We therefore engage women because we believe that women are peace-builders. They are mothers, sisters and daughters. The mothers are the ones who raise the children and teach them values.

What do you think is the cause of violence in Kenya?

The majority of the people in Kenya are youths, and they are poor. Some are educated but with no employment. Others are idle. Therefore, during this electioneering period, politicians take advantage of this to push them into fighting for their interests. 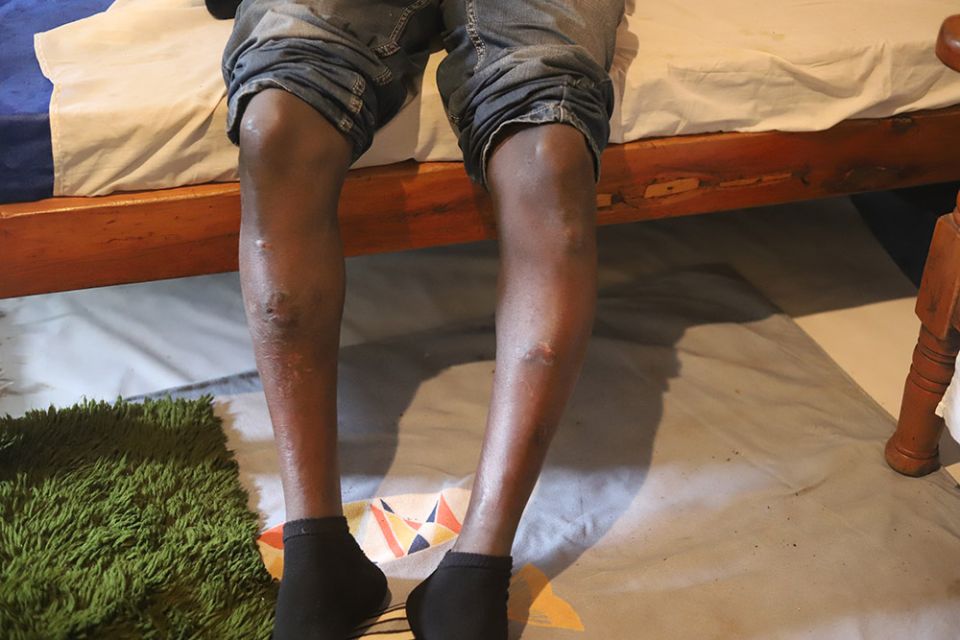 William Monda, 37, shows off the scars from his injuries during past election violence in Kenya. Monda was injured by angry youths protesting the presidential election results of 2017 in Kibera, the largest slum in Kenya. (GSR photo/Doreen Ajiambo)

There is also the problem of tribalism. Due to high unemployment rates, the youths think that if a person from their tribe is elected president, they have high chances of getting government jobs, which is usually not the case. The politicians capitalize on these tribalistic differences to push the young people to fight.

Do you think the sisters have done enough for election preparedness?

According to my research, I have realized that elections in Kenya are synonymous with violence. People will still fight in every election, whether their preferred presidential candidate is popular or not. Every election year, which happens every five years, there is always violence during and even after the elections. There's also always a lot of unreported violence across the country.

So, sisters, especially those tasked by the Association of Sisterhoods of Kenya to advocate for peace, must always be prepared to deal with the consequences of the elections. There will always be people who are injured and those who have lost their daily incomes as a result of the election violence.

Therefore, the preparedness for elections is never enough, but we have put more effort into ensuring we are ready to help people who will be affected by any violence. But I still believe our peace campaigns will yield fruits, and there might not be violence.

News | Q & A with Sister Mary Magdalene, teaching peace ahead of Kenya elections

Q & A with Sr. Cynthia Mathew, who sheds light on India's Dalit at the UN

Letter to the editor: Franciscan Sisters of Mary provided opportunities for all women