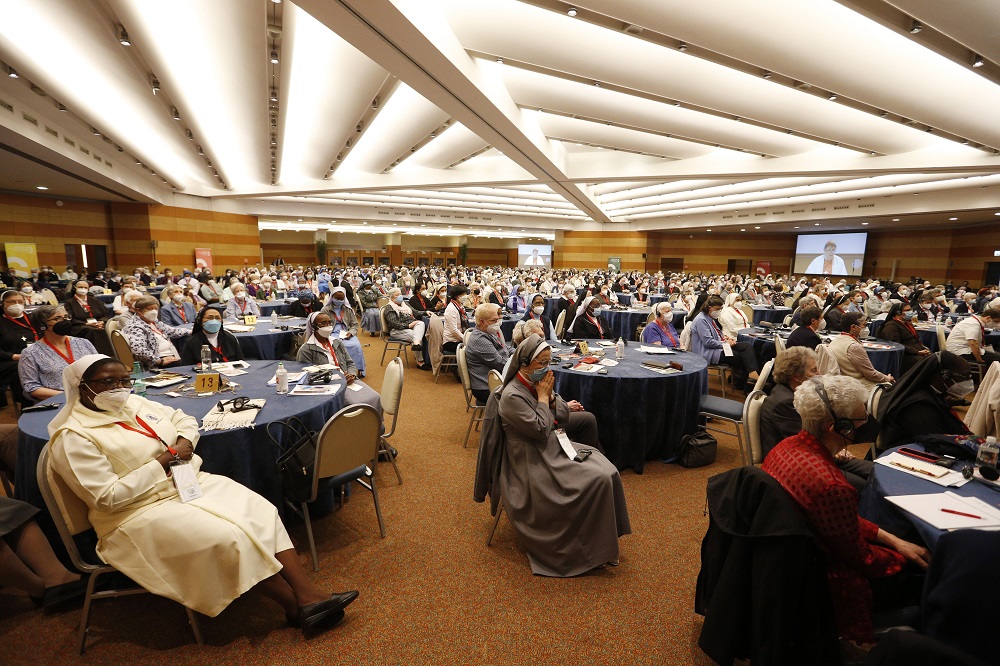 Superiors of women's religious orders attend a Mass celebrated May 3 by Brazilian Cardinal João Braz de Aviz, prefect of the Congregation for Institutes of Consecrated Life and Societies of Apostolic Life, during the plenary assembly of the International Union of Superior Generals in Rome. (CNS/Paul Haring)

Editor's note: This story was updated at 5 p.m. Eastern time on May 3 with additional comments.

With prayer and laughter, songs and furrowed brows, more than 500 superiors of women's religious orders from around the world gathered in Rome to talk about the challenges they face and the gift those challenges represent for their congregations, the Catholic Church and the world.

Wearing a sari or bright batik skirt or a long black habit or slacks, members of the International Union of Superiors General were meeting May 2-6 and exploring the theme, "Embracing Vulnerability on the Synodal Journey."

More than 700 superiors were registered for the plenary assembly; 516 of the sisters attended the meeting in person, and the others followed online.

The meeting began May 2 with theological and practical explorations of vulnerability and ways the experience of humility, weakness, brokenness and discrimination mirrors the self-emptying of Christ and puts one in solidarity with the poor and excluded.

"Pope Francis' call to the synodal process is ultimately a renewed call to mission, but not from the hitherto held position of power and authority," Sr. Anne Falola, a Nigerian member of the Missionaries of Our Lady of the Apostles, said May 2.

The communion, participation and mission that are the hallmarks of a synodal church, she said, "cannot be achieved without accepting and embracing our vulnerability."

Falola told the superiors that there are two forms of vulnerability: "from above," which involves renouncing the power, honor or rights one legitimately has; and "from below," which involves accepting one's limitations and imperfections.

In her own life, she said, she has had to embrace "my own vulnerability as a woman within a patriarchal society and church, an African in a world of global power tussles, a religious in a world of growing religious indifference and intolerance, a missionary in a xenophobic world and one called to the periphery in a world where only the center matters."

Sr. Anne Falola, a Nigerian member of the Missionaries of Our Lady of the Apostles, poses for a photo May 3 at the plenary assembly of the International Union of Superiors General in Rome. In a speech May 2 to the group, she said when Christians recognize their vulnerability and renounce their power, they imitate Christ and are true missionaries. (CNS/Paul Haring)

Brazilian Cardinal João Braz de Aviz, prefect of the Congregation for Institutes of Consecrated Life and Societies of Apostolic Life, told the superiors May 3 that their organization has been operating in a synodal manner since its founding more than 50 years ago, recognizing each other as sisters and accepting differences among them as something that enriches them all.

Before giving his speech, the cardinal celebrated Mass with the sisters, focusing his homily on the hallmarks of discipleship: fidelity to the teaching of the apostles; promoting communion in the church, with and under the pope; treasuring the Eucharist, "the sign that God wants to be near us always"; and trusting in God's love.

Sr. Jolanta Kafka, president of the UISG, told the superiors that decades of experience, including experience of the COVID-19 pandemic, had made the sisters increasingly aware that "we can bring our concerns about the needs of people and the planet to many different meetings and contexts."

"The prophetic nature of religious life calls us as superiors general or congregational leaders to mobilize ourselves as a global sisterhood," she said. "Our interdependence and our growing understanding of the importance of our intercultural prophetic witness invite us to develop ways of building communion in diversity in today's world."

In a report to membership, Kafka noted that the COVID-19 pandemic and the war in Ukraine and other conflict areas of the world have "created new horizons of different vulnerabilities in both the world and religious life." The general superior of the Claretian Missionary Sisters said UISG as an organization had to forge new partnerships and paths to serve its members, help its sisters and congregations minister to those on the margins, and contribute to the larger church.

She and Sr. Pat Murray, UISG executive secretary and a Loreto sister (the colloquial name for the Institute of the Blessed Virgin Mary) listed several accomplishments for UISG since the last plenary in May 2019: greater cooperation with the Union of Superiors General (the organization of men religious orders); more involvement with various Vatican dicasteries; and partnerships with various Vatican embassies, particularly those with female leaders, and other international organizations such as Caritas and Jesuit Relief Services on a variety of programs.

Existing UISG programs such as anti-trafficking network Talitha Kum and Sowing Hope for the Planet, which provides ways for congregations to contribute to the Laudato Si' Action Platform, elevated their visibility and expanded their reach, they said.

However, the organization suffered losses of almost $700,000 because of a reduction in dues, revenue cuts after the closure of its restaurant, and rent reductions granted to other tenants in its building. Murray credited the GHR Foundation in helping the organization meet its immediate needs.

Murray and Kafka also cited new initiatives, such as a partnership with the Leadership Conference of Women Religious for Alzheimer's research funded by the Hilton Foundation, which will be formally announced May 9. Another series of webinars addressed the needs of aging sisters. They credited UISG's staff with creativity and resourcefulness in stressful times, prompting prolonged applause and a standing ovation at the end of the report.

Yet with all that sisters do, it is also important to pay attention to the core of religious life, Kafka said, turning to two metaphors to illustrate her point.

First, she likened sisters, particularly leaders, to Sherpas who guide climbers in the Himalayas, providing support and carrying the heavy burdens, but who are not acclaimed in news articles about those who reach the summit.

She also cited a sailboat, noting that while taking care of the team that steers the boat is important, the sails themselves also have to be cared for to be sure they are open and ready to expand.

"My deepest wish is that all women religious will joyfully live their love and service of humanity," Kafka said. "With regard to questions about our mission in the world: So many times, our identity and the charism are associated with doing rather than with being. We are being called to restore the charismatic identity of the religious life as a gift for the life of the church."

Sr. Nurya Martinez-Gayol Fernández, a Spanish member of the Handmaids of the Heart of Jesus, told the superiors that as women with a specific spirituality defined by their founders and passed on by generations of their members, they have an important contribution to make to the larger church as it looks at fostering the spirituality that must underpin synodality.

Spirituality is "the frame of mind with which we face reality" and even try to take charge of it, she said, while "synodality denotes a way of living and acting that defines the ecclesial community in its relationships."

[GSR editor Gail DeGeorge contributed to this report from Rome.]