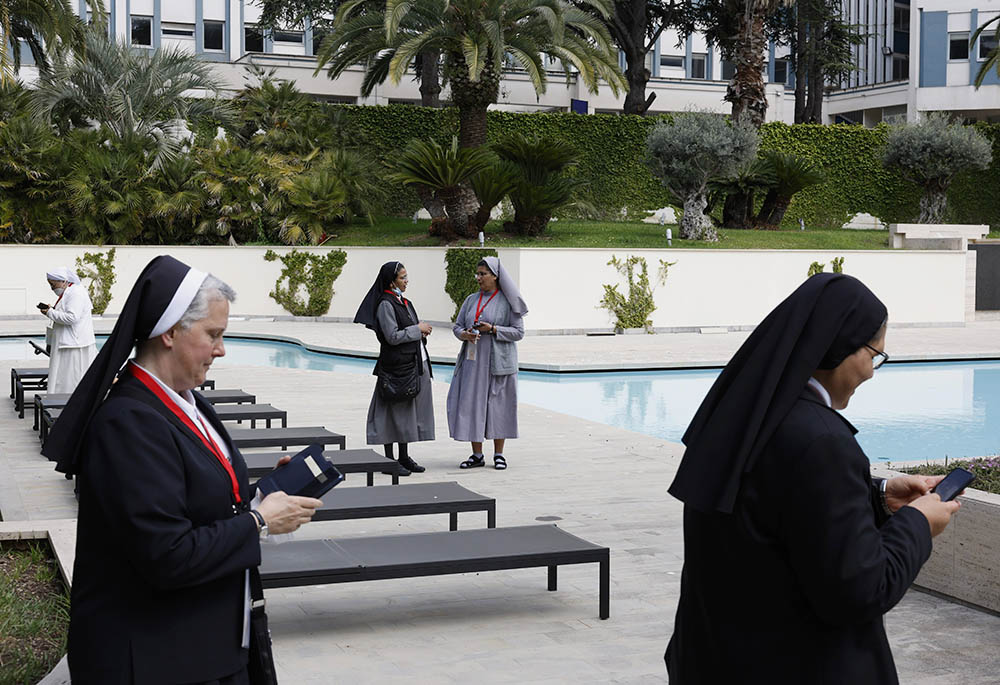 Nuns talk and use their phones during a break as superiors of women's religious orders meet for the plenary assembly of the International Union of Superior Generals in Rome May 3. (CNS/Paul Haring)

Pursuing the synodal journey means staying grounded in tradition while taking chances and being open to vulnerability, a biblical scholar told sisters on the third day of the triennial plenary of the International Union of Superiors General (UISG).

Speaking May 4 to more than 500 leaders of women's congregations gathered in Rome, Jessie Rogers, an Old Testament specialist and the first female dean of the theology department at St. Patrick's Pontifical University in Maynooth, Ireland, said if the faithful "hold on too tightly to how God acted in the past, they might overlook the new thing that God is doing in the present."

"They need to remember so that they can recognize God's footprints, but then not remember lest expectations based on the past blind them to what God is doing now," Rogers told the sisters. "It is the same God and the same story but in a different key."

Continuing and elaborating on the theme of the five-day UISG plenary — "embracing vulnerability on the synodal journey" — Rogers also cautioned against facile or glib efforts to define what a synodal church might look like.

"Do not fall into the temptation of thinking that talking about synodality is the same as practicing it. Do not study synodality without experiencing it," Rogers said. "To become a synodal church means to journey together. It means to open ourselves to others, to listen and to speak, to reflect and discern, and to take the next step together. The road is made by walking."

Based on the extended applause she received following her 45-minute presentation, Rogers struck a chord with her audience. Even so, Rogers acknowledged that it is not easy to "embrace the wisdom of vulnerability."

"It means sowing seeds hopefully, even when we are weeping, and entrusting their growth to God. It means risking ourselves and our future for the sake of the world and its future," she said. "It means accepting that change comes about not by force, but by embracing the other through the offer of reconciliation. We need to imbibe Jesus' countercultural way of being in the world."

In focusing on the themes of vulnerability and synodality, the sister leaders have signaled their willingness to embrace Pope Francis' call for a church based on a synodal manner, one that returns the church to its early roots and that respects listening and cherishes diversity. To bring about that church, Francis will convene a synod on synodality in 2023.

Rogers asked the sisters to reflect on hearing the wisdom for their own synodal journeys, noting that they have been nourished by traditions and their congregations' founding charisms. History, she said, "gives you a firm place to stand. It has shaped your understanding of God and how God works. Such knowledge is key to being able to recognize God's footprints."

But, Rogers cautioned, "like a tree putting out new branches, you need to be open to the future, a future that you cannot predict in advance, but one whose new shoots you can recognize in the present if you pay attention. The God you have come to know is the God who will take the story further. But this God cannot be limited to what you know already." 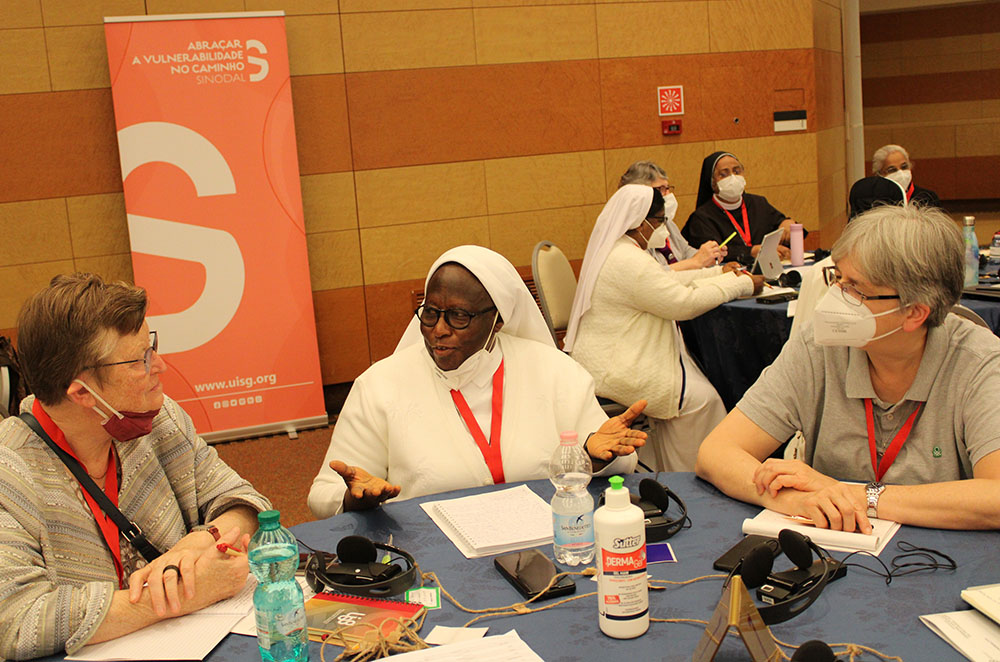 Sisters discuss the theme "embracing vulnerability on the synodal journey" with their tables May 4, the third day of the triennial plenary of the International Union of Superiors General in Rome. (GSR photo/Chris Herlinger)

Biblical texts, Rogers said, "create a space in our remembering to stop us from trying to trap the future in the cage of the past. We are called to be open and responsive to the new thing that God is doing."

Striking similar themes, Sr. Nathalie Becquart, a member of the Xavière Sisters in France and an undersecretary of the Synod of Bishops, and Fr. David McCallum, an American Jesuit priest and renowned leadership educator, also spoke May 4 before the sisters in a public dialogue about the need for religious to contribute to the discussion of synodality.

But, they stressed, religious have much to receive and learn.

Becquart and McCallum said a focus on synodality is a call to walk with others as sisters and brothers on a journey and to change the way authority is exercised in the church.

"A new style of leadership is crucial," Becquart said.

McCallum, the founding executive director of the Program for Discerning Leadership — a special project of the General Curia of the Society of Jesus, Georgetown University and the Pontifical Gregorian University — said he hoped the church can "learn from the margins" and spoke of his six years of working with Indigenous groups in upstate New York. 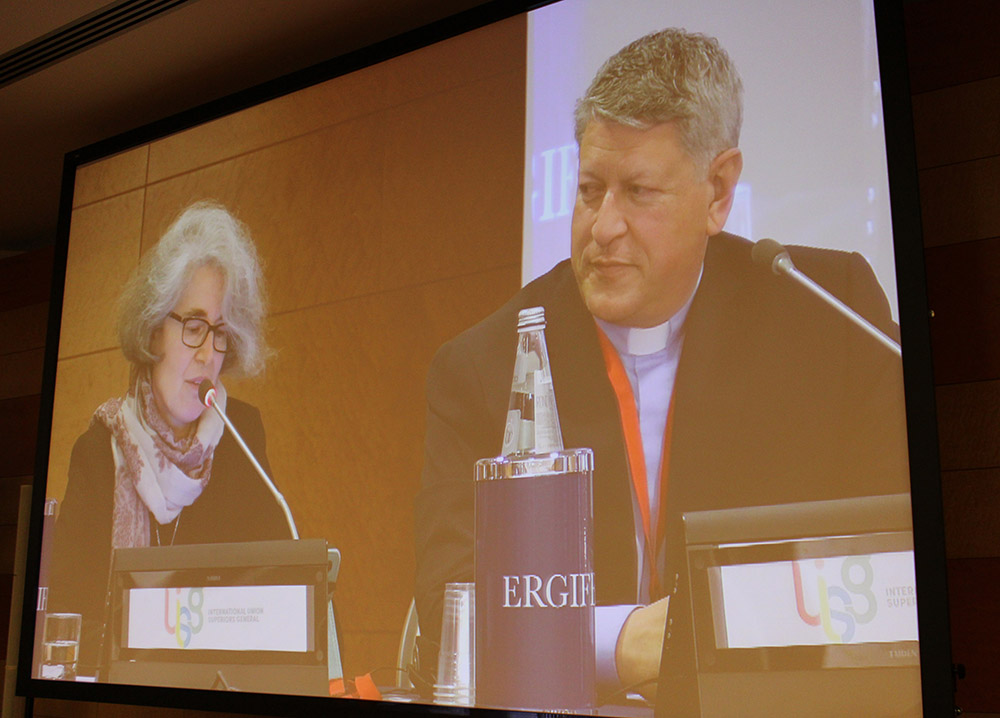 Xavière Sr. Nathalie Becquart, an undersecretary of the Synod of Bishops, and Fr. David McCallum, an American Jesuit priest and renowned leadership educator, speak about the need for religious to contribute to the discussion of synodality May 4 at the International Union of Superiors General plenary in Rome. (GSR photo/Chris Herlinger)

His experience of a "dialogue circle" with the Onondaga people as they spoke of how the church, including Jesuit missionaries, wounded and disempowered them over centuries was humbling, McCallum said.

Speaking on the theme of synodality calling religious life to conversion, McCallum said, "It is usually more relevant to the men." He said that is not because he is a man, "but because I think we're the ones who have more conversion to do, as has always been the case from the time of Jesus."

He added: "When the disciples were arguing over who was the greatest and Jesus told them that they had to become servants, I don't recall any women being present. Women have always been attuned to what synodality is about."

The sisters at the plenary chuckled at Becquart's description of her experiences so far at the Vatican.

"Here in Rome," she said, "I feel like I'm living a second novitiate."