Editor's note: This story was updated July 1 with a statement of support from more than 195 theologians around the world. 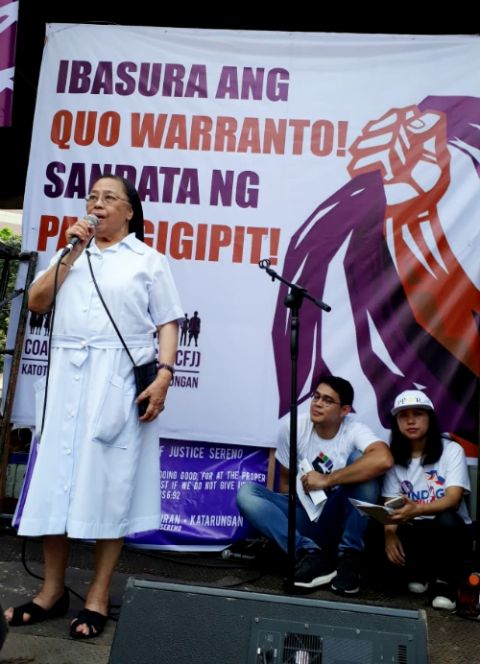 Sr. Mary John Mananzan, a Missionary Benedictine and internationally recognized feminist theologian, is not afraid of public stances. In this photo, she speaks at a rally in 2018 near the Supreme Court building in support of a Chief Justice Maria Lourdes Sereno, who was being removed through a motion filed by the solicitor general. (Ma. Ceres P. Doyo)

Manila, Philippines — A firestorm in mainstream media and social media has broken out in the Philippines after a judge handed down a guilty verdict for cyberlibel for two journalists of an online news website based in Manila. Amid the firestorm was Missionary Benedictine Sr. Mary John Mananzan, an internationally recognized feminist theologian who openly criticized the judge and her decision. The comments sparked the ire of a member of Philippine President Rodrigo Duterte's communications staff who publicly called Mananzan a member of a "communist terrorist organization."

On June 15 Judge Rainelda Estacio-Montesa rendered a guilty verdict for Maria Ressa, executive editor and co-founder of Rappler, and Reynaldo Santos Jr., a former Rappler reporter, for an article posted online in 2012.

The article should have been past the filing date for a libel lawsuit under the Philippines' anti-cybercrime law passed in 2012. But the article was considered "republished" in 2014 because a spelling correction was made that year and therefore within the "prescription" or statute of limitations, in the Philippines.

Businessman Wilfredo Keng Jr., the complainant, filed the case in 2017 five years after the Rappler article came out. The article was mainly about Supreme Court Chief Justice Renato Corona who had been impeached in 2011. Keng was mentioned incidentally in the story. Corona was the first justice of the high court to be impeached and later dismissed in its history; he died in April 2016.

Media in the crosshairs

The decision had been a much-awaited because Rappler and other media entities have been in the crosshairs of the Duterte administration, which began in 2016.

Ressa and Santos are now on bail while the case is appealed.

One of Time magazine's Persons of the Year in 2018, Ressa was a former CNN bureau chief in Asia and now a well-known figure in mass media nationally and internationally. She has seven other cases against her, among them related to Rappler's alleged foreign ownership and funding sources that Duterte has constantly criticized openly but that Rappler has repeatedly denied.

Duterte has publicly expressed his dislike for Rappler, even banning one of its reporters from his press conferences. Rappler is a Philippine online news website that uses social media sites for news distribution. "Rappler" comes from the words "rap" (to discuss) and "ripple" (to make waves). It was founded in 2012.

The day after the conviction, Mananzan posted on her Facebook page a scathing reaction. 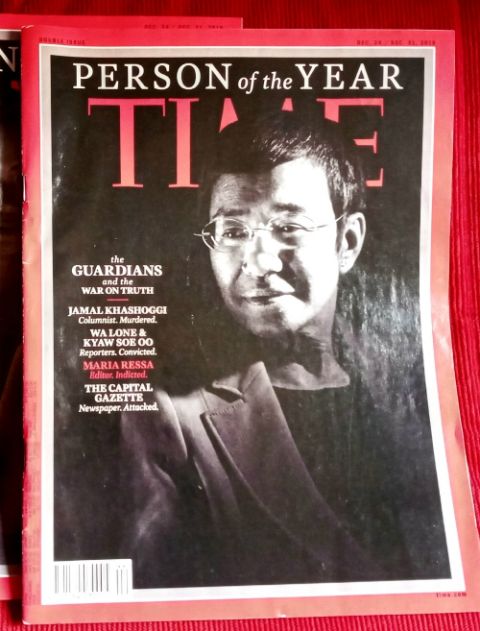 Maria Ressa, executive editor and co-founder of Rappler, was One of Time's 2018 Persons of the Year. (Ma. Ceres P. Doyo)

"I strongly condemn the conviction of Maria Ressa And Reynaldo Santos Jr. by Judge Rainelda Estacio Montesa. I am ashamed that she studied in St. Scho. I am sad that she did not learn the values of a Scholastican education. Whatever successes you may have attained I am afraid you are a failure as a Scholastican. Some consolation is that Maria Ressa is also a Scholastican," Mananzan wrote June 16.

Mananzan, 82, was formerly president of St. Scholastica's College in Manila, a school for girls and women known for its assertive and progressive teachings on social issues. She is also a former prioress of her congregation's Philippine Priory. (She is also a columnist and a current panelist for Global Sister's Report's The Life.)

Estacio-Montesa finished high school at St. Scholastica. Ressa also went to grade school there before her family moved to the U.S., where she later studied at Princeton University. Ressa considers the Philippines her home.

Mananzan's Facebook post elicited strong reactions in both public and private exchanges and among the school's alumnae. Some found it too strong and judgmental, others hailed it.

But when Lorraine Badoy, an official from the Presidential Communications Operations Office, came out with a statement linking Mananzan to armed rebel groups, the nun's friends and supporters closed ranks and denounced Badoy for "red-tagging."

A spokesperson for the government's anti-terrorism task force, Badoy accused Mananzan of being a member of the Communist Party of the Philippines-New People's Army-National Democratic Front which she classified as a terrorist group.

She said: "A Catholic nun given a place of honor in a communist terrorist organization. Imagine that." The post went on to accuse Mananzan of aiding and abetting terrorist actions. Badoy also called her a "wolf in sheep's clothing."

Women's organizations rallied behind Mananzan, a noted theologian, feminist and environmentalist who founded the college's Institute of Women's Studies. She is the current chair of the Office of Women and Gender Concerns of the Association of Major Religious Superiors in the Philippines (AMRSP), which she has also headed.

'Take a look at the life of Sr. Mary John and see how easily she was attacked and red-tagged by the current administration.'

Concerned about Mananzan's security and reputation, the Ecumenical Women's Forum issued a statement defending Mananzan and citing her involvements in the people's struggle for freedom and human rights.

"This recent incident exemplifies a pervasively malicious spirit that has taken hold of the Duterte administration, but it also drives home the danger of the pending Anti-Terrorism Act in the Philippines," said the statement from the forum, which is composed mostly of women leaders from both Protestant and Catholic churches and organizations.

The statement was signed by 23 signatories, including bishops, Catholic women congregational religious leaders and leaders of other religious organizations.

"Take a look at the life of Sr. Mary John and see how easily she was attacked and red-tagged by the current administration. If the government can attack Sr. Mary John, it will surely use the Terror Bill as a weapon to red-tag and accuse many, or any, who criticize, protest, or dissent. Its vague definition of terrorism renders this bill a threat and danger to many." (Editor's note: Doyo, author of this article, is a board member of the Office of Women and Gender Concerns, and a signatory to the letter.)

The controversial anti-terror bill has been passed in both houses of Congress and awaits the president's signature.

But even without the bill, which critics call the "Terror Bill," the Rural Missionaries of the Philippines found its bank accounts frozen in December 2019 because they were allegedly involved in "terror financing." The accounts are still frozen according to the organization's head, Sr. Elsa Compuesto of the Missionary Sisters of Mary. The bill includes freezing of assets of those suspected to be connected to terrorist groups.

A former head of the Rural Missionaries of the Philippines, Our Lady of Sion Sr. Patricia Fox, fought a lengthy legal battle against deportation under the Duterte administration before returning to Australia in late 2018.

The AMRSP's Task Force for the Orientation of Church Personnel also issued a statement. "We are greatly alarmed by the increase of cases of red-tagging of individuals and organizations that are known to be critical of the current administration perpetrated by no less than the high officials of the land. Sadly, even church people are not spared. We know from bitter experiences that such red-taggings are used as justifications to commit human rights violations under the guise of 'counterinsurgency.'

Support for Mananzan continued to grow with a letter posted June 29 on Facebook by more than 195 theologians from Latin America, Africa, Asia, Australia, Europe, North America and the Philippines. Mananzan, the letter said, is a "highly respected feminist icon, from ecumenical circles to grassroots and people's movements, to academicians and scholars who struggle for empowerment and liberty. While she has lived most of her life as a nun serving God by serving the poor, she has never romanticized or justified their suffering and instead stands in solidarity with them by magnifying their calls and protesting alongside them in the streets. ...

"A few days ago, Mary John Mananzan’s acts of love and solidarity for the poor have been labelled as the actions of a terrorist by an official of the Philippine Government. In past incidences, such red-tagging was followed by human rights violations and killings. Thus, we condemn this labeling as an attack on one of the prophets of our time. Mary John has been unwavering in her commitment to justice and peace, which are concrete expressions of love. Her life and work have never caused terror, but have only inspired faith, nationalism, and a critical consciousness among the people. In this time of great vulnerability, we stand with her and the Filipino people in our common pursuit for peace with justice."

GSR sought out Mananzan for her reaction. "I did not react right away because I felt the judge could actually justify her decisions ... but when I reflected on it in the bigger context of the clear persecution of critical journalists, especially of Rappler and Ressa, I formed this judgment," Mananzan said. "That if she really internalized the Scholastican values of truth, justice and social transformation, she should have seen that this case is simply a part of the effort to repress freedom of expression, of dissent and free press and publication."

The decision has "grave consequences on this issue," she added. "My post focused more not on the technicality of her judgment but on where it is coming from and its consequences. I actually started praying for her to guide her future decisions."

And what was her Benedictine community's reaction? "It was not a big topic in our community. The sisters are used to my critical judgments on social and political issues."

As for Badoy's accusations, Mananzan said, "I found her rantings absurd, thoughtless and not worthy of response. But I was overwhelmed by so many individuals and local and international groups' statements of solidarity and support. Some lawyers offered their services in case I would like to file a cyberlibel case."

The battle is far from over for justice, truth in America