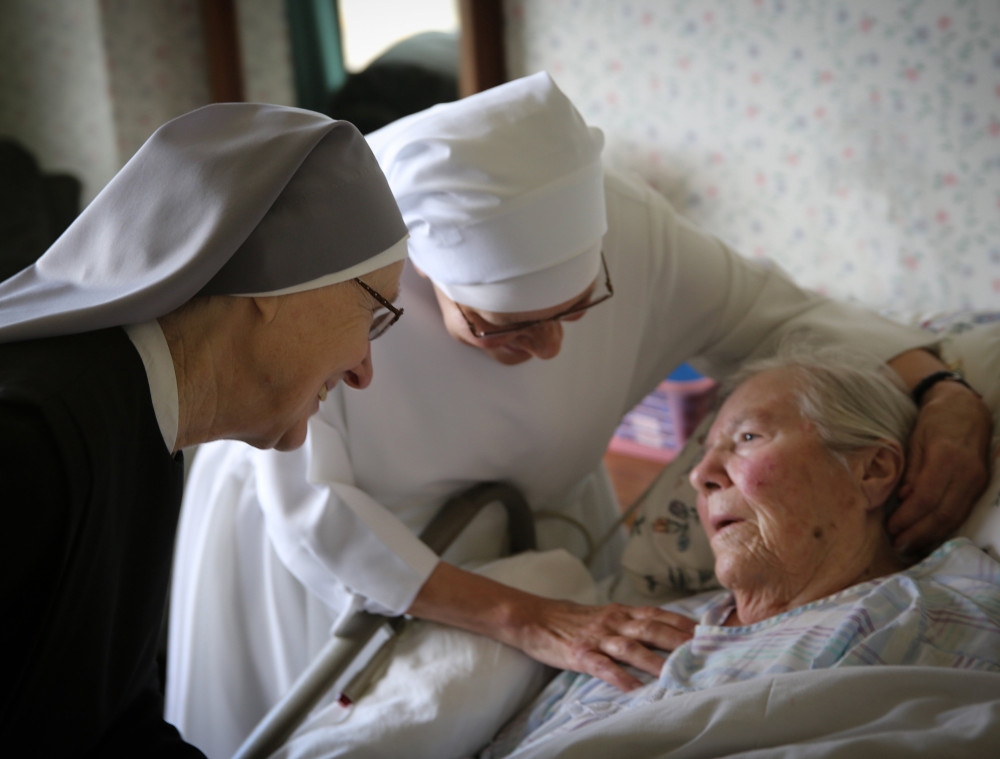 Much attention was given to church teaching on assisted suicide and euthanasia when the Vatican released its Sept. 22 letter "'Samaritanus bonus,' on the Care of Persons in the Critical and Terminal Phases of Life," but Sr. Maureen Weiss focused on the document's guidance on accompanying the dying, a key component to her vocation.

Sr. Maureen entered religious life in 1968, took her final vows as woman religious with the Little Sisters of the Poor in 1978, became a nurse, and in a community that cares for the elderly poor, she has accompanied hundreds of men and women at the end of their earthly lives.

"The church wants people not to be abandoned during this moment," she told Catholic News Service shortly after the 25-page letter "'Samaritanus bonus'" was released by the Congregation for the Doctrine of the Faith. "We accompany a baby at birth and at baptism. My community makes sure we're carrying them to eternity. That is the journey of our life."

Calling "'Samaritanus bonus'" a "beautiful document," Sr. Maureen — who most recently was the administrator and mother superior of her community's Jeanne Jugan Residence for the elderly poor in Somerville, Massachusetts, before it was sold to the Visiting Nurse Association earlier this year — was particularly moved by the passage that says Christians must "know how to stay, to keep vigil, with those who suffer the anguish of death, to 'console' them, to be with them in their loneliness, to be an 'abiding with' that can instill hope."

"When they are drawing close to the end of their life, that's a sacred moment," Sr. Maria said. "That soul needs support. It's why we keep vigil."

The thought of being with someone as they die sometimes stirs fear, especially among those who haven't witnessed death before, Sr. Maria told CNS and acknowledged that she was afraid the first time she accompanied a resident's end of life.

"But, watching the sisters praying with that resident, I realized it was a sacred moment and it eased my fear," she said. "What an honor and gift to be there when that last breath is offered. It gives me chills. That is the closest to eternity we'll ever get in this world. Her first breath in eternal life."

"'Samaritanus bonus'" — which was approved by Pope Francis before its release — reminds Christians that Mary remained at the foot of the cross as Jesus took his last breath in his physical body.

"In this way, we can see the intrinsic link between what the document says about (Jesus' passion) and compassion — our need to get involved personally with the dying," said Mark E. Therrien, assistant professor of dogmatic theology at the University of St. Mary of the Lake/Mundelein Seminary in Mundelein, Illinois.

"I think that its major contribution is to emphasize the necessarily spiritual dimension of medical care," Therrien told CNS.

Though the church does approve of pain medication to help ease the suffering for terminal patients, this most recent document emphasizes the dose should not be enough to hasten death.

Though it's the mission for those who keep vigil to make the dying as comfortable as possible, even with the use of pain medication, sometimes they can't take all of the suffering away, and Sr. Patrice Ormerod — who serves at the Little Sisters of the Poor Holy Family Home in Philadelphia — said witnessing that can be a difficult part of her ministry.

"To see a person suffer brings us to redemptive suffering," said Sr. Patrice, but emphasized that comfort is the main concern for a dying resident. "Maybe for some reason our Lord is asking a person to have a deeper share in his passion through their suffering. There is an unexplainable peace in suffering and in the joy of being one with him."

From the Christian perspective, then, to care for the dying is ultimately a way of participating in the ministry of Jesus himself as he continues to suffer in the least of his members here on Earth, Therrien said.

"In terms of what the church hopes to accomplish in the first part of ("'Samaritanus bonus'"), it seems to me that the major goal is to put care for the dying into a Christological and evangelical framework," he said. "The document's emphasis on the cross is key. From the perspective of the Gospel, it is precisely through the Passion that we come to experience eternal life — not only after we have died, but even incipiently, in a true way, in this life too."

Sr. Kathleen Murphy — who serves at the Little Sisters of the Poor Holy Family Home in Philadelphia — said in reading "'Samaritanus bonus,'" "I also valued the emphasis on having a 'heart that sees' and not losing 'that personal touch' in our present age of advanced therapeutics."

Although she has accompanied many residents through their journey to eternal life, she said it has never become routine, and the coronavirus pandemic has presented even more challenges for the dying in their final days.

"I was just with one of our residents as she was dying with COVID-19 and the safety precautions were burdensome, to say the least," Sr. Kathleen told CNS. "It was strenuous to try to keep her family connected by telephone and to try to communicate with her myself through a mask and face shield. I held her hand with my gloved hand and prayed and sang short refrains with a muffled voice."

Though the accompaniment of the dying is a different experience with each individual, the experience is always an honor, she said.

"I certainly feel privileged to be present as someone is nearing the threshold of eternity," Sr. Kathleen said. "I consider it an honor to share this sacred time with dying residents and their families. Sometimes I'm awed at the thought, 'I'm the last face she saw before seeing the face of God!'"