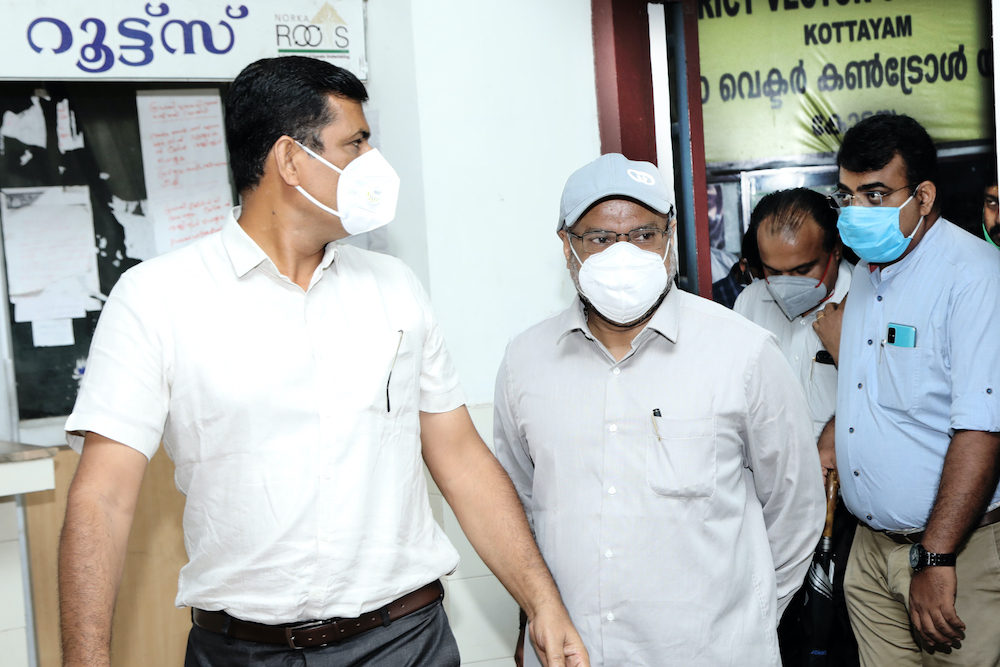 Bishop Franco Mulakkal of Jalandhar, center, in a light-colored cap, exits the Additional District and Sessions Court in Kottayam, Kerala, Aug. 13, 2020, after he was formally charged with raping and intimidating a Catholic nun. (M.A. Salam)

Two years after a Catholic sister accused a bishop of rape and intimidation, the official trial started Aug. 13 as a district court judge read the charges aloud to Bishop Franco Mulakkal of Jalandhar.

The rape case is the first one to involve a Catholic bishop in India. The trial will resume Sept. 16 with testimony from the victim and cross-examination.

Judge G. Gopakumar of the Additional District and Sessions Court in Kottayam, Kerala, read out a brief statement of charges that said Mulakkal had repeatedly raped the former superior general of the Missionaries of Jesus and intimidated her with the influence of his office.

The nun has accused Mulakkal of subjecting her to rape and sodomy 13 times between 2014 and 2016.

The judge also listed the dates of the alleged crimes in the congregation's convent at Kuravilangad, a village near Kottayam, and asked Mulakkal if he would agree with the charges.

The prelate, who stood before the judge in the witness box at the back of the courtroom, loudly replied, "No." His response was heard by those inside the court and about two dozen watching the proceedings from the corridor.

Until now, most hearings in the case have been held in closed session with only the judge, attorneys for both parties, court officials and the investigating officer present, as requested by Mulakkal, who has been absent on many occasions.

Although the Aug. 13 proceedings were open to the public, the court did not permit visitors and media inside due to COVID-19 protocols.

The process of reading out the charges lasted three minutes as the judge highlighted the main points of the 2,000-page charge sheet that included statements of the accused and witnesses, the police investigation's findings and supporting documents.

Unlike in past appearances, Mulakkal avoided wearing bishop's clothing and opted for a pair of trousers, a shirt and black sports shoes.

He had reached the court 15 minutes early and waited on a wooden bench reserved for those involved in the trial.

Asked for his reaction as he walked out of the court, Mulakkal, 56, told reporters, "I pray the hidden truth be brought out" through the trial.

The bishop appeared composed as he waved to the media while getting into the car to leave.

Meanwhile, the court has summoned the rape survivor to testify Sept. 16 and respond to questions.

"The process of trial in the case has begun after framing the charges against Bishop Mulakkal, and now the court will examine the survivor and other witnesses in the case in the interest of justice," public prosecutor Jithesh J. Babu told Global Sisters Report.

"The trial in the case, if continued uninterrupted, will be over within two or three months," he added.

The case has 83 witnesses, including Cardinal George Alencherry, the head of the Eastern Rite, Kerala-based Syro-Malabar Church.

Mulakkal maintains his innocence and says he is a victim of conspiracy. He also maintains the case against him was due to the nun's vengeance for his ordering a probe into her alleged financial mismanagement and other issues.

However, various levels of Indian judiciary had rejected the bishop's efforts to get his case dismissed. All of them — the trial court on March 16, the Kerala High Court on July 7 and the Supreme Court on Aug. 5 — rejected Mulakkal's appeals and ordered him to stand trial.

On July 13, the Kottayam court canceled the bishop's bail and issued an arrest warrant against him after he missed 13 court dates. It also seized 200,000 rupees each from two guarantors and 200,000 rupees the bishop had given as his personal guarantee. The 600,000 rupees forfeited totals about $8,000.

Claiming he tested positive for COVID-19, Mulakkal approached the court on July 17 to restore his bail and cancel the arrest warrant. The court asked the police to verify the medical certificate and stayed his arrest until Aug. 7.

In a surprise move Aug. 7, the bishop surrendered to the Kottayam court, which restored his bail after he promised not to miss future dates. The court also asked Mulakkal and two new guarantors to deposit a new 600,000 rupees as surety. 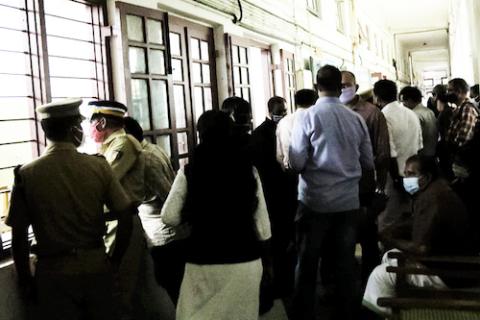 Visitors and media crowd the corridors of the Additional District and Sessions Court in Kottayam, Kerala, where Bishop Franco Mulakkal was formally charged with rape and intimidation of a Catholic nun. They were not allowed inside the courtroom due to COVID-19 protocols. (M.A. Salam)

The Mulakkal team said it plans to file fresh suits against the nun's family.

Martin Menachery, a layman who accompanied Mulakkal to court and served as his spokesperson, said he has complained to federal and state agencies, urging them to investigate the source of income for the nun's family.

"How could her family with 80 cent farmland [less than an acre] become so rich? This has to be probed," he said, adding, "I will soon file a case against her family in the court."

Menachery also alleged that members of Save Our Sisters whom he labeled as rebels had launched an orchestrated attack on Mulakkal. "All this will be soon exposed," he said.

Save Our Sisters, a laity movement, supports the survivor and those with her. 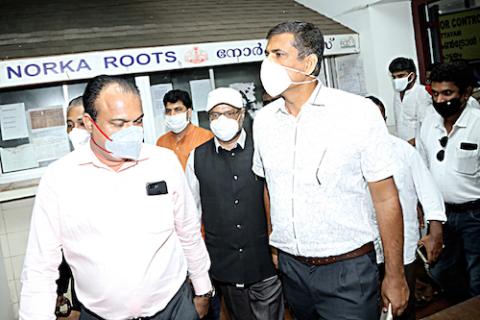 Bishop Franco Mulakkal of Jalandhar, in dark jacket, outside Additional District and Sessions Court in Kottayam, Kerala. He successfully petitioned the court on Aug. 7 to restore his bail. (M.A. Salam)

Sources such as Capuchin Br. Dominic Pathiala cite the Mulakkal case as an example of how the ego of some church leaders brings a bad name to Christians in India. "The highhandedness of the bishops leads to serious damage to the church's credibility, and the ordinary people have to bear the brunt," the priest told GSR. (In the independent Capuchin order, friars are priests but refer to themselves as brothers.)

Pathiala regrets that other bishops have aligned with Mulakkal and refused to listen to the survivor or the laity who have demanded justice for her. "The bishops think they are the church," he adds.

He also finds fault with the 2020 directory of the Indian Catholic Church because it continues to list Mulakkal as the Jalandhar bishop despite the Vatican's appointing an administrator for the diocese in his place.

Pathiala says the Indian Church could have been spared shame if other bishops had listened to the survivor's request. "Her only request was to allow her to work in another diocese away from Mulakkal's control," he recalls.

Sr. Anupama Kelamangalathuveli, the spokesperson for the survivor and her supporters, said in a guarded reaction, "The court is doing its duty and all of us are bound to follow it in the interest of justice."

Riju Kanjookaran, convener of Save Our Sisters, urged that Mulakkal be ousted immediately from the Jalandhar bishop's house now that the courts have rejected his petitions to dismiss the case.

"The Catholic Church leadership should take a stand and ask Mulakkal to vacate the bishop's house from where he allegedly runs the affairs of the diocese from behind the curtain," he told GSR.

Kanjookaran also urges the Vatican to suspend Mulakkal immediately and restore him only after he is exonerated by the court.