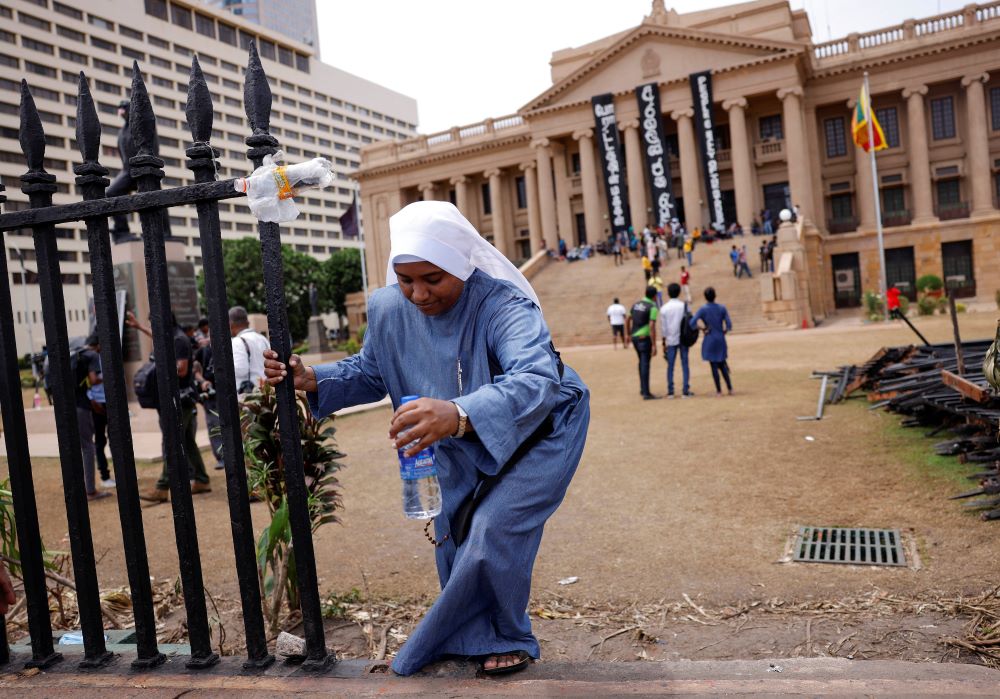 A nun climbs over the boundary wall at the Presidential Secretariat in Colombo, Sri Lanka, July 15, after an official announced the resignation of President Gotabaya Rajapaksa, amid the country's economic crisis. (CNS/Reuters/Dinuka Liyanawatte)

Sri Lankans are experiencing one of the worst economic and political crises today, yet they enjoy an "unusual unity and brotherhood," say some Catholic nuns in the island nation in South Asia.

"The north and south are united. Sinhalese and Tamils have joined hands. Buddhists, Muslims, Christians and Hindus no longer see any differences," says Sr. Dulcie Peiris, a Salvatorian nun who has worked for reconciliation between Tamil and Sinhalese ethnic communities since the end of a civil war between the two groups 13 years ago.

Earlier this month, they all marched toward Colombo, the national capital, shouting, "Gota, go home," a slogan they used to protest Gotabaya Rajapaksa, the country's president, and his government. Rajapaksa, who had played a key role in ending the civil war in July 2009, resigned July 14. On July 20, prime minister Ranil Wickremesinghe was elected president by lawmakers.

The protests began in April, when Sri Lanka spiraled into a severe economic crisis. The ongoing COVID-19 pandemic has disrupted tourism to the island, and Rajapaksa's government has been unable to pay for essential imports. In addition to shortages of fuel, medicine, food and other essentials, the country faces 57.4% food inflation, the World Food Program notes. 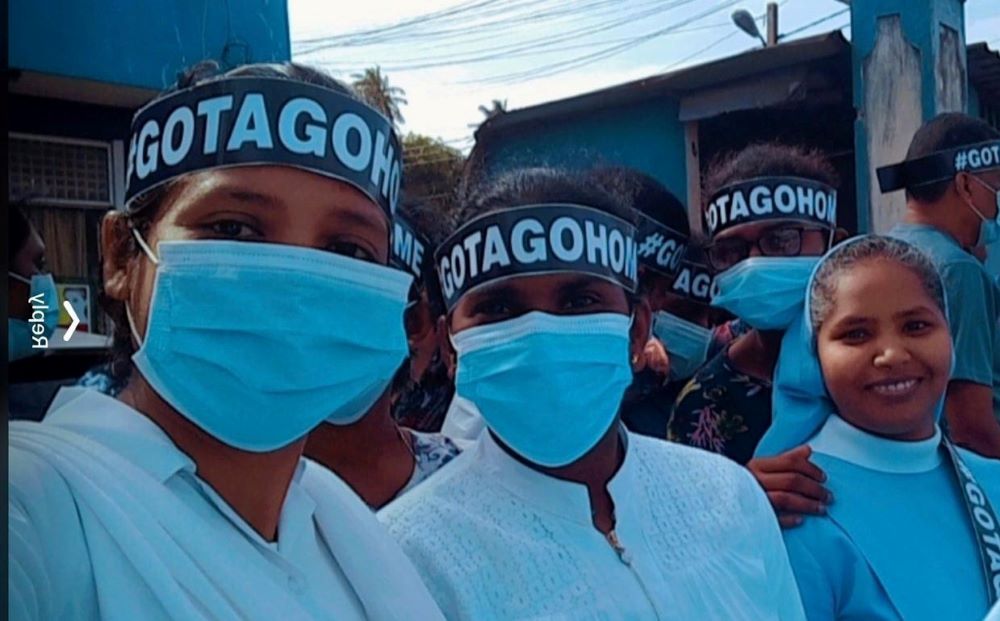 According to downtoearth.org, an environmental website, Rajapaksa's decision in April 2021 to ban pesticides and manure in Sri Lanka and call for organic farming destroyed the country’s farming sector, reducing its crops by more than 50%.

Peiris, who joined the civil protests from the beginning, said the lives of common people have become miserable and hopeless as they feel the effects of the shortages. However, "they are united under our national flag."

On July 7, the Supreme Court of Sri Lanka had dismissed a petition by the president's office to stop the protests, saying the court had no power to stop people from reacting. Following this, the Rajapaksa family went into hiding.

The protests remained mostly peaceful until July 9, when an estimated 200,000 people assembled in Colombo, demanding the resignation of Rajapaksa and his team. They stormed and took control of the presidential palace as a symbolic victory of people's power. Rajapaksa fled the country, reportedly traveling to the Maldives and then to Singapore.

The same day, protesters set Wickremesinghe's house on fire, and he resigned as prime minister. He then became acting president when Rajapaksa resigned.

Wickremesinghe said Sri Lanka is now a bankrupt country and it could take years for it to recover. Sri Lanka announced in April that it would suspend nearly $7 billion foreign debt repayment due for this year out of about $25 billion due through 2026. Sri Lanka's total foreign debt stands at $51 billion.

"There is no magical solution to the problem," he said in an emotional note while responding to the destruction of his house by the protesters. 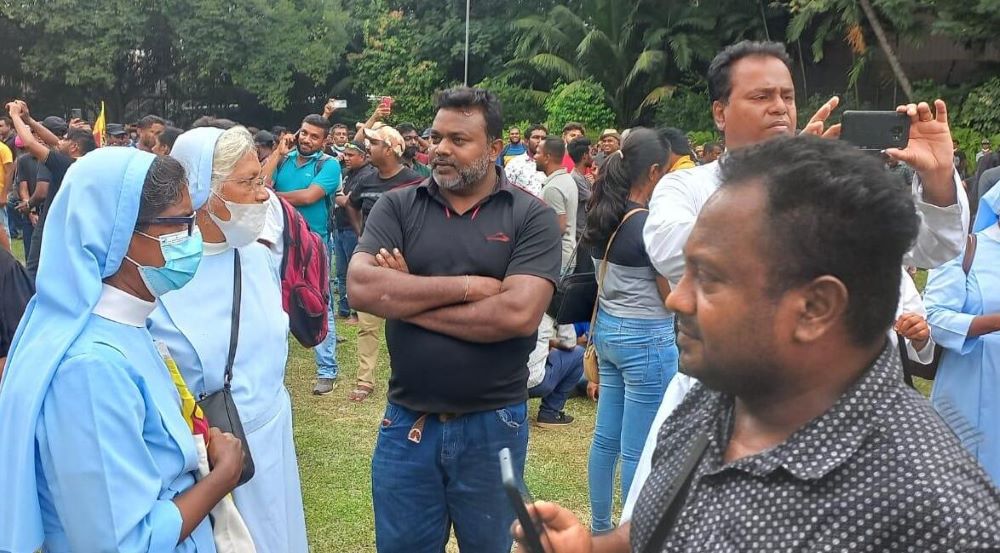 Nuns in discussion with some youth leaders during protests in Galle Face, Colombo, capital of Sri Lanka. (Courtesy of Shiroma Kurumbalapitiya)

Salvatorian provincial Sr. Shiroma Kurumbalapitiya was among thousands who protested at Galle Face Green in the heart of Colombo, demanding the resignation of the president. Galle Face, a 12-acre oceanside urban park along the coast, is the location of the old parliament house and the presidential offices.

Speaking to Global Sisters Report by phone from Galle Face, Kurumbalapitiya said she came by train to Colombo from her base in Kurunegala, some 65 miles northeast, to join the protests.

"These days, I am in the streets with my people, and I will continue to be with them until we achieve our goal," said the nun July 8, a day before protesters stormed the presidential palace. She returned to her provincial home only after the president resigned.

The provincial said she boarded the train with hundreds of people from her town to join the protests in Colombo.

"Like me, thousands of people have come from other parts of the country by train, bus and trucks. Some came by walking," said the nun, who spent nights on the protest grounds serving the people.

"During the day, I do my official duties as the provincial at our convent in Colombo, but at nights, I usually join the protesters at Galle Face grounds," she said. 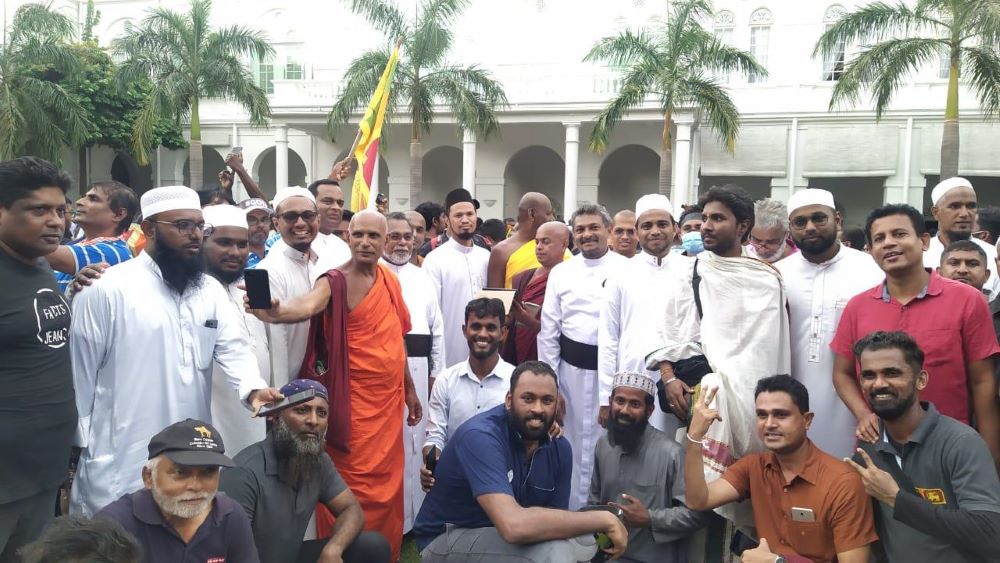 Religious leaders from Catholic, Buddhist, Muslim, and Hindu communities at the protest rally in Colombo, capital of Sri Lanka. (Courtesy of Shiroma Kurumbalapitiya)

"No one should go hungry during protests," said Kurumbalapitiya, who added that they fed thousands of protesters daily.

"Everyone did their roles as the best example of crisis management," the provincial said.

Kurumbalapitiya said despite a few violent incidents, the protests have been generally peaceful.

"It is a great revolution without bloodshed," she said.

Kurumbalapitiya said the major superiors of the Catholic religious congregations had given an open call to religious to get involved in the protests and serve the protesters in whatever way possible.

"Catholic religious have joined the protests in big numbers from the day one, and they were part of the mass protests on July 9, as well," she said.

She said it was a pleasant experience to see Catholic priests and sisters joining Buddhist monks and nuns, Muslim clerics and Hindu priests to play a greater role in ensuring peaceful protests.

"They all worked hand in hand, a situation I could never imagine in the Sri Lankan context," she added.

Sr. Prothmary Marianatham, a Holy Family nun from Jaffna, some 250 miles north of Colombo, said she has not witnessed such a union between Tamils and Sinhalese since the end of the civil war.

Marianatham, a Tamil who works among fishermen, said those who are most affected by the protests are farmers and daily wagers, who struggle to have a single meal a day.

"Everything is expensive, and everyone is jobless," she told GSR on July 12. She said she joined the protests because the church cannot stay away from the people.

Good Shepherd Sr. Dinalika Perera said her congregation has been finding it difficult to run their homes for elderly and children because of shortages of cooking gas and food.

"We hope and pray for good days to come," said Perera, whose religious congregations is one of the oldest in Sri Lanka.

Related: Q & A with Sr. Dulcie Peiris, working for peace and reconciliation in Sri Lanka

Peiris, who manages a formation house in Kandy, about 90 miles northeast of Colombo, told GSR that for three months, she survived with firewood for cooking instead of gas and sometimes ate raw vegetables.

"When we think about the people in villages, we feel we are much better," she said. "We have firewood and we complain about cooking gas, but they have no rice."

Kurumbalapitiya said the crisis has brought people together, exhibited their generosity and humanness, and "it was a memorable time being with the people, experiencing their joy and frustrations, struggles and hopes."