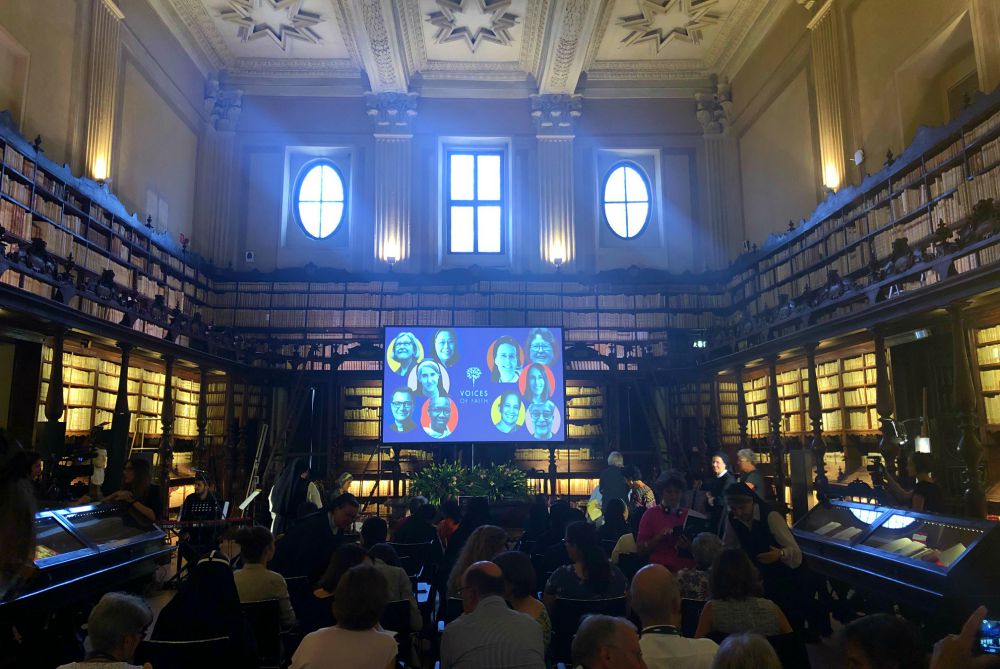 Days before the synod on the Amazon is to convene Oct. 6, Catholic women called attention to an omission they say bears insulting implications and stifles the potential of the church.

Once again, no women will be allowed to cast a ballot during the synod, which is expected to discuss married priests, ministry for women, and exploitive mining and illegal deforestation of the Amazonian region. And while previous justifications for this exclusion leaned on the argument that women are not ordained and therefore ineligible, sisters and nonconsecrated women point to the fact that for the second synod in a row, a nonordained religious man will be allowed to cast a vote.

If the goal of the synod is to "study, explore, find ways to improve the quality of the life of Christ in a region ... it seems to me the purpose of the synod will be missed," said Social Service Sr. Simone Campbell at an Oct. 1 press conference.

The executive director of Network, a Catholic social justice lobby, said this point should not be overlooked when discussing the structure of the synod. 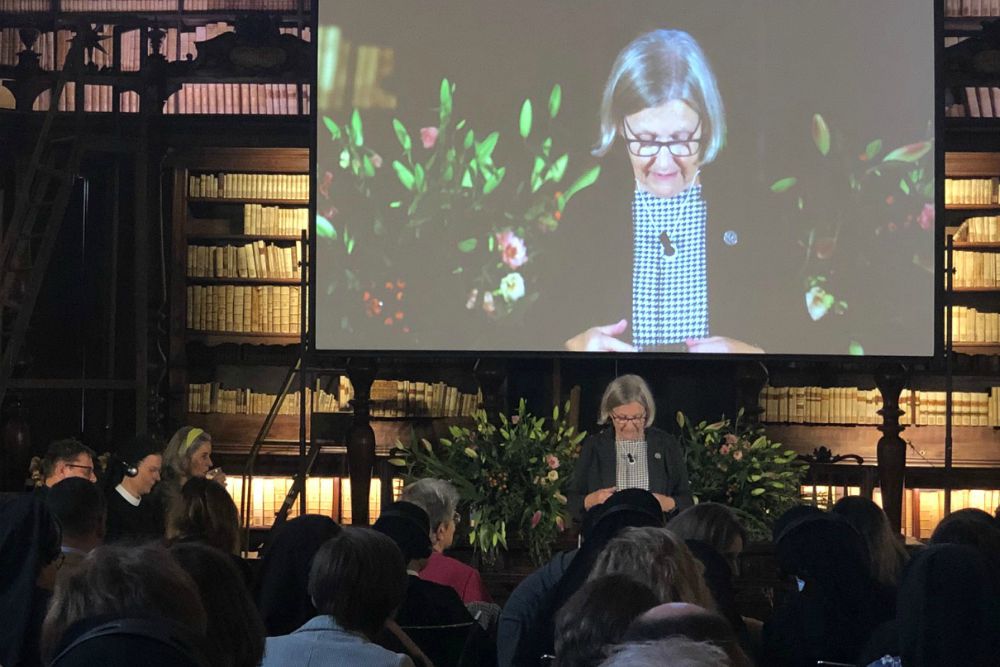 Social Service Sr. Simone Campbell opens the conversation by discussing lack of women's votes in the Synod on the Amazon. (GSR photo/Soli Salgado)

Two events in the week before the synod brought to the fore the exclusion of women in the synod and church at large.

As part of the Votes for Women campaign, an Oct. 1 press conference with sisters and lay Catholic women leaders specifically addressed the omission of women's voices in the synod despite the fact that women are the "principal ministers" in the Amazon region, Campbell said.

And at an Oct. 3 gathering titled "Overcoming Silence," Voices of Faith invited a sister from each continent (as well as a bishop and former sister) in dialogue, addressing what they said was sexism at the root of the various challenges women religious face in their regions and sharing their views on how the church's current gender dynamics are contrary to the Gospel.

Kate McElwee, executive director of Women's Ordination Conference, launched the Votes for Women Campaign in 2018 around the youth synod. The campaign has led demonstrations, collected more than 10,000 signatures and written letters to bishops on the issue of sisters voting at the synod.

"A closed-door session of bishops and clerics is not the solution we need ... rather, it's the root of problem, and the pain of this closed door is felt deeply around the world," she said at the Oct. 1 press conference.

And when Paola Lazzarini, founder of Donne per la Chiesa (Women for the Church, a network for social promotion), recently wrote a letter to the secretary of communications of the synod following the campaign's initial outreach, the reply was that regulations have been written, and it's impossible to change them at this time, she said at the press conference.

When it comes to the right time for women to speak out on this issue, Lazzarini said, it is apparently "not before, not during, not after. So when?"

Some progress on representation

Deborah Rose-Milavec, executive director of FutureChurch, invoked one of her "favorite characters" from the 2018 synod on youth: St. Joseph Sr. Sally Hodgdon.

At the Oct. 1 press conference, Rose-Milavec said Hodgdon, then vice president of the International Union of Superiors General (UISG), pointed out that sisters "are 80% of consecrated religious, yet our male brothers vote, and we do not. We need to be a dangerous memory of this synod and the spirit of what happened at this synod ... We will not let this issue just die." 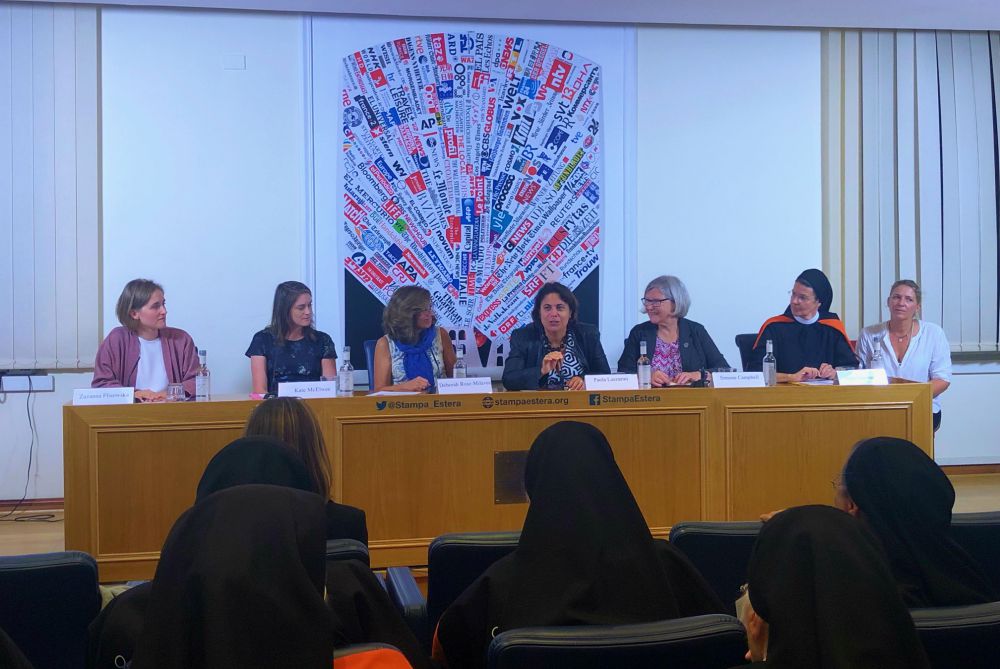 Rose-Milavec noted some progress since then: The first draft of the last synod's final document referenced the issue of women voting (though it was excised in the final draft), and UISG now has 10 members represented at this synod.

"It's a sign of hope, but still, they're not voting. There's more work to do," she said, adding that the campaign to educate, ask questions, and raise this issue will continue throughout this synod while supporting women religious in their lobbying efforts.

While seeing women with equal representation in all decision-making bodies is the ultimate desire, Rose-Milavec and fellow panelists Oct. 1 agreed that pushing for sisters as voters is a "first, doable step." She also noted that at last year's synod, sisters had their representation chosen for them, while male religious could choose for themselves who to send to the synod.

At the Oct. 3 gathering, Campbell said, "There is much lamentation about the lack of ordained clergy; many leaders in our church are floundering. If the body of Christ is to be healed, our church leadership needs to turn their eyes to the gifts of the Spirit that are all around, but it does not appear that they are willing to do this unless we sisters speak up."

She said the church would benefit from incorporating "feminine intelligence," citing the five chief characteristics Scilla Elworthy, founder of the Oxford Research Group, has identified: inclusivity, listening, interconnection, compassion (empathy that leads to action), and regeneration.

In a time of crisis, with sexual abuse, financial scandals and reported infighting, "it would be a breath of fresh air to include this feminine intelligence at the synod," Campbell said.

To do so for the Amazon synod, she added, would honor the memory of Notre Dame de Namur Sr. Dorothy Stang, who was murdered for her efforts to protect the Amazon from exploitation and degradation.

"Sister Dorothy gave her life for the people and the land," Campbell said. "We sisters have a responsibility to lift up her voice and make her presence felt.

"How can our beloved institution turn their backs on the voices of our sisters who live with the people of this threatened region? How can our sisters not have at least one vote at the synod? And, my sisters, how can we not speak up for the most marginalized people and for our wounded Earth? The time is now." 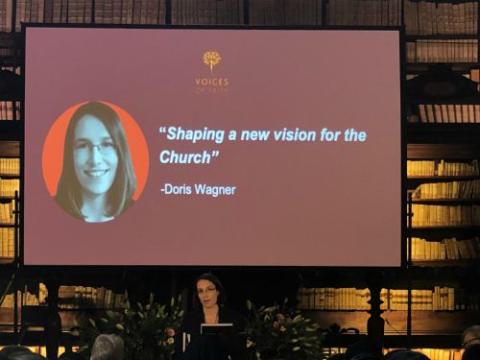 Doris Wagner, a former sister of the Congregation for the Doctrine of the Faith, discusses the limitations of clericalism. (GSR photo/Soli Salgado)

Decisions all tie back to clergy

Doris Wagner*, a former sister who left religious life after experiencing sexual abuse, spoke at the Voices of Faith event in solidarity with the women religious present. Each shared a different encounter of sexism within religious life in her country, such as property disputes with dioceses or being denounced for giving homilies.

But Wagner focused on the "inefficient leadership of the church," the "dysfunctional and outdated constitution of the church," and how the distribution of power means no priest is accountable to his parish or bishop to his diocese. Rather, they answer only to the pope.

"How can we regard democracy's separation of powers, a fair proportion of offices held by women as basic standards of good governance when it comes to developing countries, and somehow pretend that doesn't apply to the church? It's ridiculous," Wagner said. Just as the systemic cover-up of sex abuse in the church is what ultimately leads to distrust, she said, the justification behind the exclusion of women participation.

"There are some people who believe the church already has an excellent instrument to involve laypeople in decision-making in the synods, and I don't believe that for a simple reason," she said. "Even the decisions concerning synods are all tied back to clergy. It is the bishops' decision if, when and how a synod should be held in his diocese." 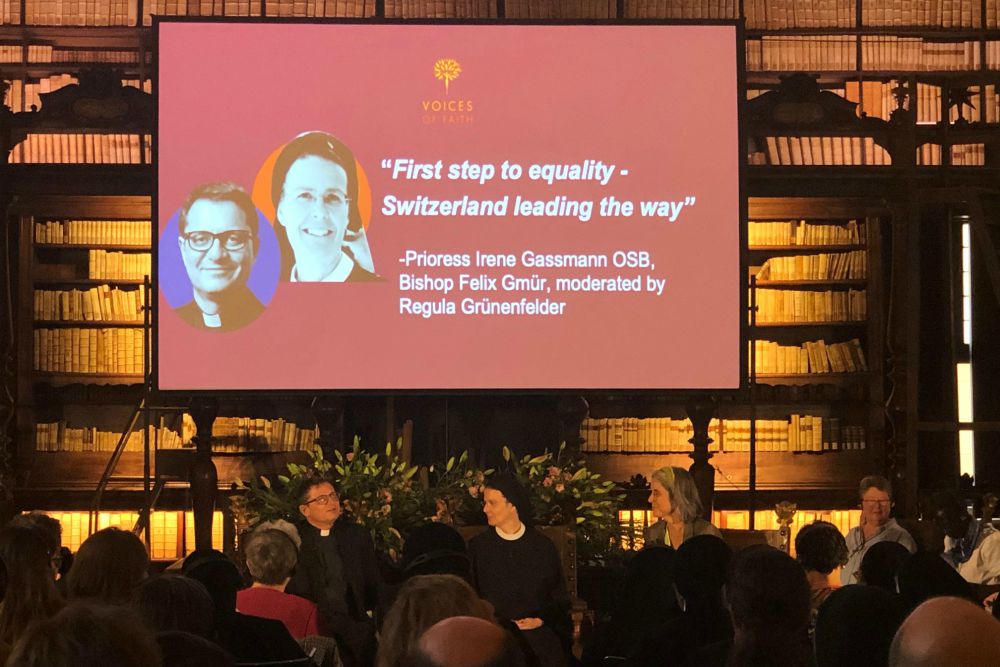 Bishop Felix Gmür, of Basel, Switzerland and president of the Swiss Bishops' Conference, in dialogue with Benedictine Sr. Irene Gassmann, of the Fahr Monastery in Switzerland. With Regula Grünenfelder, a theologian, as the moderator, Gassmann and Gmür discussed steps toward equality, with Switzerland as an example. (GSR photo/Soli Salgado)

And with bishops only accountable to the pope, not bound to what the synod voted for, she continued, "even synods are just another instrument of power in the hands of bishops."

"We need to stop pretending they would be any closer to God than we are or better informed of God's personal plans or entitled by God to dismiss the needs and voice of ordinary people," she said. With male clergy making up just 0.01% of the Catholic Church, she said, the remaining 99.9% "have to speak, stop the unilateral monologue, and start a rich and constructive and multilateral dialogue with all our brothers and sisters."

Ultimately, Wagner called for a constitutional movement for the church, saying while she knows it is unlikely, she remains "hopeful, because there is no other way."

For others at the Voices of Faith event, one sign of hope was the presence of Bishop Felix Gmür of Basel, Switzerland, president of the Swiss bishops' conference. In conversation with Sr. Irene Gassmann, prioress of her Benedictine convent of Fahr, Switzerland, he maintained traditional viewpoints that ordination ought to determine one's eligibility to vote.

"If women and men are not ordained, then they are equal, and this is the same even if they are ordained. I would be very committed to defend this aspect; for me, it is natural that they have the same opportunities. They need to."

*An earlier version of this story stated incorrectly that Doris Wagner had been an official at the Congregation for the Doctrine of the Faith. Global Sisters Report regrets the error.