US sisters meet about how to re-imagine future, especially now with COVID-19

'Religious life is made for times of upheaval' 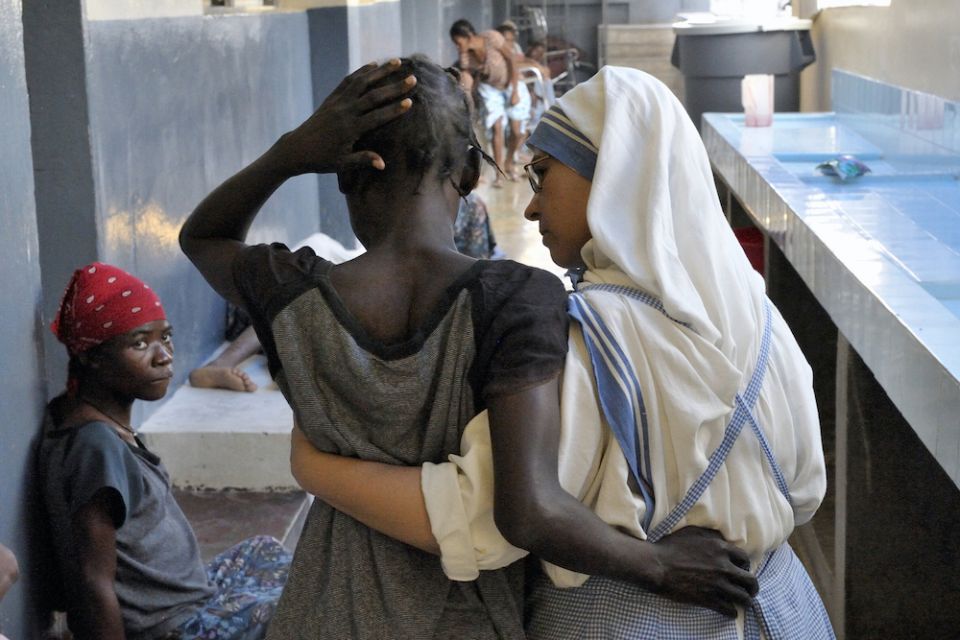 Spanish Missionary of Charity Sister Paul supports a patient Oct. 16, 2009, at the House for the Dying in Port-au-Prince, Haiti. In a recent webinar with 100s of sisters from around the world, Sr. Carol Zinn, executive director of the Leadership Conference of Women Religious said she hopes that the U.S.'s tendency to feel invincible will shift to a greater appreciation for vulnerability, as she reflects on the essential workers who the pandemic has thrown to the forefront. (CNS/Paul Jeffrey)

Today's world, struggling with the urgent needs emerging from the coronavirus, can learn from the witness of sisters, said the presidential team for the Leadership Conference of Women Religious.

"Women religious have a history and a genius for looking outward beyond ourselves, for responding to need, for taking a situation that we did not choose but for which we find ourselves dealing with," said Holy Cross Sr. Sharlet Wagner, past-president of LCWR, whose members are leaders of communities constituting nearly 80% of women religious in the U.S.

"That's where the world is now."

The International Union of Superior Generals hosting the webinar, and hundreds of sisters around the world joined the online session, "Re-Imagining the Future: Religious Life in the United States."

Though a world in crisis can learn much from the experiences of women religious — a global community that's historically found their stride in times of chaos, as Zinn later explained — the pandemic leaves no lifestyle untouched, including that of sisters. And with religious life already experiencing dramatic demographic changes (more sisters in the U.S. are over age 90 than under age 60), the coronavirus is only accelerating the changing landscape.

The four LCWR leaders shared the practical and spiritual implications of this pandemic on U.S. religious life: the economic challenges facing their sponsored ministries, fears for their elderly sisters, the poverty and societal injustices that demand collective response, and the need for a transformative sisterhood — one that goes beyond collaboration and instead prioritizes true partnership. 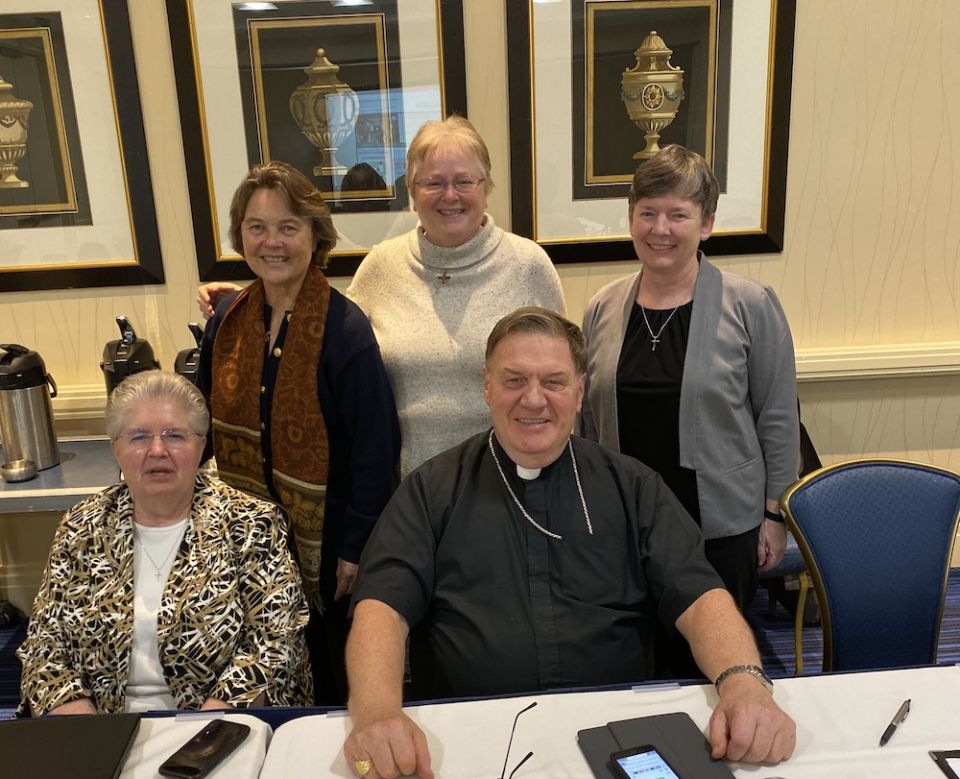 Helmlinger said she's unsettled like she's never been before in leadership. But she welcomes that feeling, calling it "holy disquietude" — a tension and anxiety that is energizing rather than limiting.

"I don't want to numb myself against what's happening around the world in all the countries, because from that suffering and pain, I think a deep next movement of religious life will emerge," she said.

Recalling how the Spanish flu (1918-19) was an impetus for more sisters getting involved in healthcare, Helmlinger said the response to today's pandemic should not be merely "with ourselves, our congregations," but with collective action.

"Where is that shared space now that will help us move forward into the future in a way that our collective wisdom, collective experiences will inform our next steps?" she said, speaking first in the webinar.

"We've got to pray together, discern together, and help each other in a way that maybe we haven't been called to before. This to me is a heightened necessity of our need to continue partnerships and interactions in a much more focused and global way than we have before."

In a solitary prayer service in St. Peter's Square March 27, Pope Francis said that the coronavirus had put everyone "in the same boat." Reflecting on this image, Helmlinger said she's reminded that from Earth to the cosmos, "we are one. So how do we respond as one, and not simply with our congregational needs, but the needs of the world?"

The pope's boat metaphor also prompted the sisters to point out that the pandemic is disproportionately affecting the poor and racial minorities. As women religious, they need to pay attention to the newly marginalized and to emerging needs as they consider their role in responding to the crisis.

Difficult realities include their ministries — those that sisters lead as well as sponsor — as investments, income and donations all diminish while expenses remain or increase.

"Many of us have long struggled with what it means to live simply, and we may be forced by realities into deeper examining of simple living and the choices we will need to make," Wagner said.

LCWR and U.S. congregations, she said, have kept focused on the issues of justice and Catholic social teaching throughout this crisis: "We know that our congregations do not exist to serve themselves and ensure their own survival. We exist to look outward and serve church and society."

To best serve those disproportionately affected by the virus, religious leadership will have to consider how their direct service, advocacy and spiritual leadership can be pooled across borders in a coordinated response.

"What new ministry and new ways of ministering will emerge as we move through this crisis and beyond?" Wagner said.

Garcia acknowledged the sense of "utter helplessness" with this pandemic, as sisters who are used to rolling up their sleeves during crises are now told to stay home, which "goes against the grain of our apostolic witness and service."

But amidst social distancing, she said, is the opportunity to deepen spiritual communion.

Like many large gatherings now being held online as a precaution against contagion, the LCWR assembly planned for Dallas, Texas, will be held virtually mid-August.

Wagner said this as an opportunity for the conference to work toward one of its goals of becoming more technologically astute. And though technology can never replace in-person contact, she said, she's hopeful that the world will strike a happy medium as digital events allow more people to attend.

Garcia also noted that though humanity may be suffering, the Earth is benefitting from this "time out."

"As I think about what is ours to do as women religious, I think some of it involves, not so much what it is we have to do, but also what it is we should no longer be doing, and what behavior patterns we might need to be examining for change as well," Garcia said. 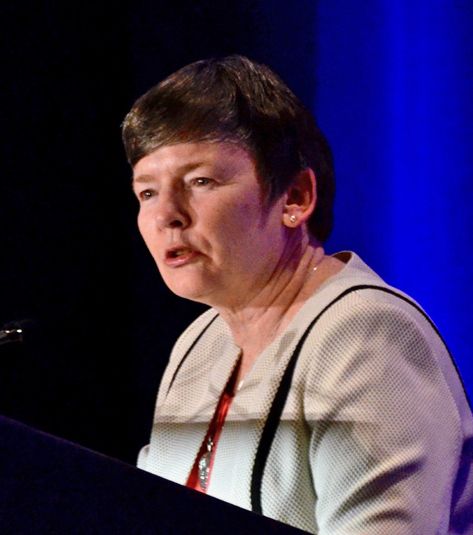 Holy Cross Sr. Sharlet Wagner and then-president of the Leadership Conference of Women Religious speaks to the assembly in August 2019 in Scottsdale Arizona. (GSR/Dan Stockman)

"At this time, we're also profoundly called to reflect upon an orientation of the common good of the whole Earth community, the sacred nature of all elements of God's creation — not just human species and our like upon this Earth."

'Preparing for a tsunami'

A shift in structures, membership, ministries, sustainability — through these gradual changes, LCWR has been experiencing an earthquake, Zinn said

Looking at patterns in nature, tsunamis sometimes follow earthquakes, she said. And LCWR has been preparing for its tsunami.

Though demographic changes among U.S. religious have been percolating for decades, Zinn said sisters are just now starting to feel those shifts and paying attention to what it could mean for them.

"What does it mean that an earthquake has happened, and that the grace of God, if you will, is watching over us and taking us to places where we would probably not choose to go?" she said.

Now that COVID-19 is likely to influence emerging expressions of religious life, Zinn cited four characteristics particular to U.S. culture that LCWR membership — "though we don't desire it, we breathe in the air of the culture" — must now confront as they reimagine the future.

As LCWR tries to offer "anticipatory leadership" in the midst of all the meaning-making that religious life is discerning during the pandemic — for religious life, the country, the world — Zinn said the images of the earthquake and tsunamis should remind sisters that they are in this for the long haul, always fixed on Jesus.

"My hope is that what LCWR can offer to that post-COVID-19, post-earthquake, post-tsunami journey as we try to reimagine the future of religious life here in our country, is to understand that religious life was made for these times," she said, pointing to the many congregations who were founded in times of upheaval.

"The DNA of religious life is that we are born in and out of chaos."

Coronavirus | US sisters meet about how to re-imagine future, especially now with COVID-19

Living the charism during the pandemic in Peru

Q & A with Sr. Mary John Mananzan, documenting Philippine church history from the viewpoint of the 'vanquished'

Context is everything when examining federal budgets