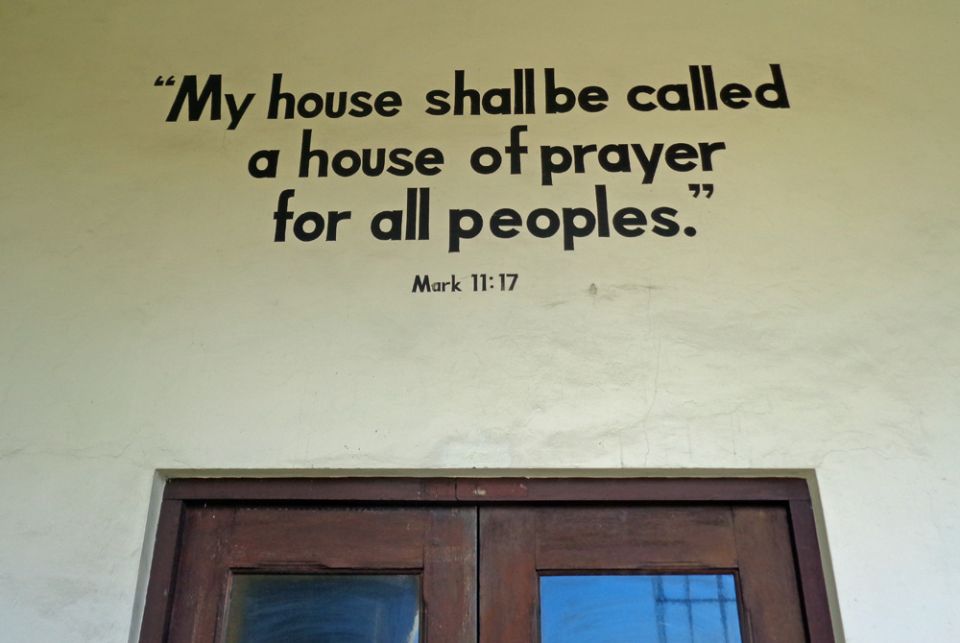 Scripture text adorns a wall of the monastery for the Carmel of Mary, Queen of the Universe and of Saint Therese of the Child Jesus in Zamboanga City, Philippines. Ibrahim Nuño, a Muslim civil engineer whose family has helped the community, constructed a new building for the Carmelite monastery, for free. (Charity Durano)

Zamboanga City, Philippines — A two-story retreat house built by a Muslim benefactor opened a new stream of income for a community of Carmelite nuns in the southern Philippines and is the most visible sign of long-standing ties between the nuns and their Muslim neighbors.

"Without waiting for me to finish the appeal he said that he would build it completely free," recalled Sr. Mary Agnes Xavier Guillen of the Discalced Nuns of the Order of the Blessed Virgin Mary of Mount Carmel, who meets with visitors from outside the community. She was speaking of Ibrahim Nuño, a Muslim civil engineer with roots in Zamboanga City, and whose family has helped the community of Catholic nuns in various ways. When the St. Teresa Hall next to their chapel needed urgent repairs to its roof, Guillen reached out to Nuño, who offered to construct a completely new building that was completed last year

"We have formed friendships with the Muslims through the years. They come to share their concerns, their problems and to ask for prayers," said Guillen. She noted the common devotion of Christians and Muslims to Our Lady of the Pillar, patroness of Zamboanga City, one of the largest cities in the country. (The devotion to La Virgen del Pilar, originally brought by the Spanish colonizers in the 1700s, remains the most popular Marian devotion in the region, where she is revered as a miracle-worker and a guardian.)

"I remembered the kindness and the offer of our old friend to help if we needed anything," said Guillen, who reached out to Nuño, president and managing director of a Luzon-based construction company known for malls, office and residential buildings.

"Carmel's presence in Zamboanga is a witness to the value of prayer in the life of everyone, Christians or Muslims," said Guillen. 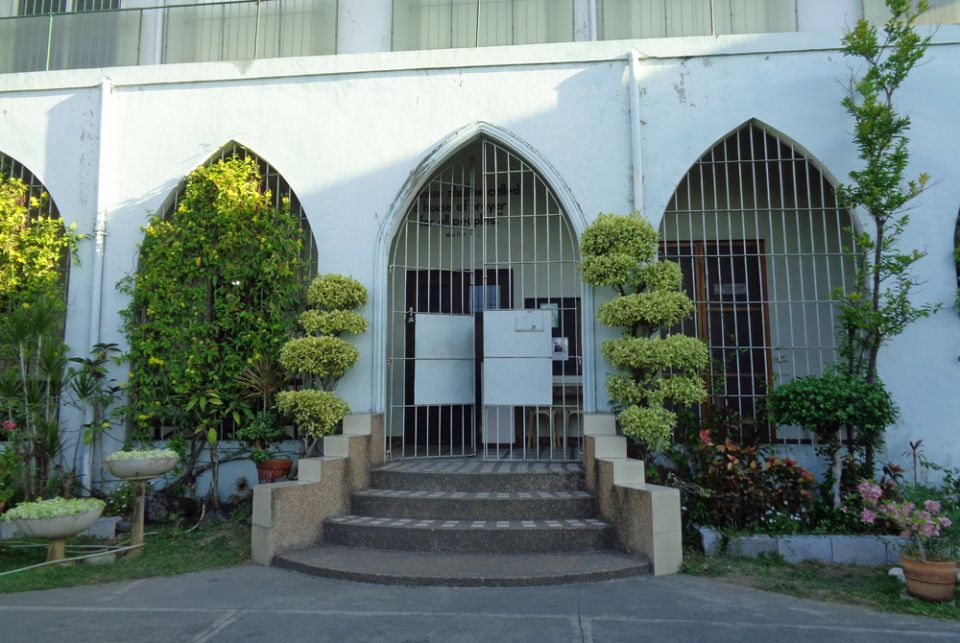 The door grille that leads to the receiving room for visitors at the Carmelite monastery located along the coastal boulevard in Zamboanga City. (Charity Durano)

Founded in 1956, there are 18 Carmelite nuns who make up the Carmel of Mary, Queen of the Universe and of Saint Therese of the Child Jesus in Zamboanga City. Their average age is over 60 years old, with the youngest member in her 40s. It is one of 23 monasteries of the Discalced Nuns of the Order of the Blessed Virgin Mary of Mount Carmel, or OCD, in the country, seven of which are in the Mindanao region, including the one in Zamboanga City, according to the 2019 Catholic Directory of the Philippines.

For 49-year-old math teacher Ruth Guerrero, "the presence of a Carmelite monastery connotes a kind of spiritual assurance, that is, we have prayer warriors." Guerrero, who teaches at the Jesuit-run Ateneo de Zamboanga University in the city and is a member of the formation team for first-year students, added, "whenever I happen to be around the area or pass by where their monastery is, even without entering their compound, I feel a quiet assurance of serenity."

Guerrero still remembers how her mother offered prayers at the monastery when Guerrero took her board exams, as well as at the Shrine of Our Lady of the Pillar. "The practice has always been there since we believe that is their vocation to devote time for prayer. It's also like we want to make sure the Lord hears us." 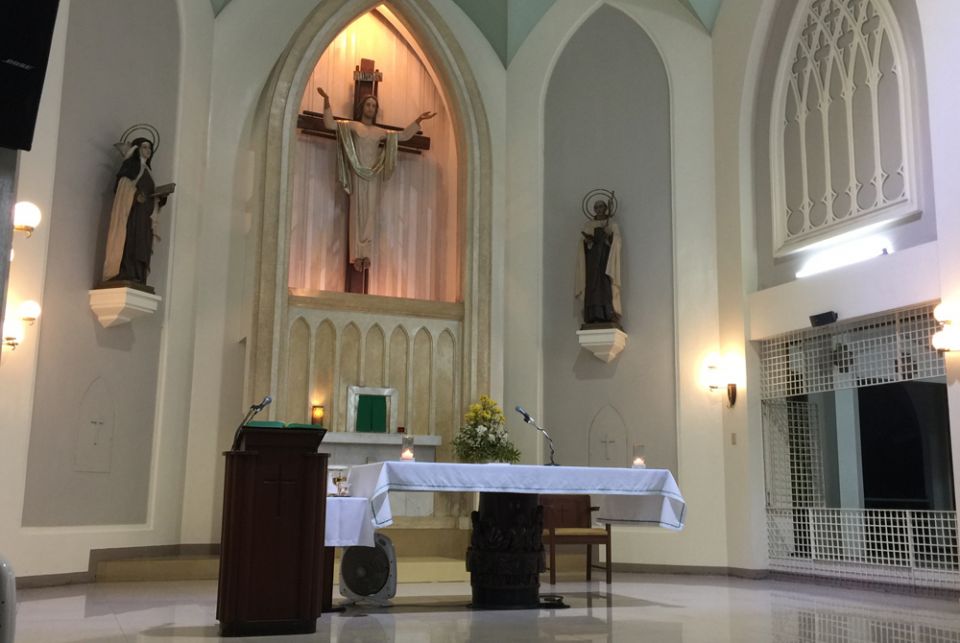 The grille, at right, separating the cloister from the public area, is opened for the Mass. (Charity Durano)

The Santa Teresa House of Prayer is the second project that Nuño has done for the Carmelite community. According to Guillen, "[Nuño] has expressed to us that building it is an honored privilege for him, one that will bring blessings to him and his family."

The impetus to initially repair and then build a new retreat house came out of a need for extra space. Guillen said that diocesan and religious priests often ask to stay at the monastery for a retreat but they have had to turn down some requests because they only had two guest rooms.

The new house of prayer means that they can accommodate more priests and members of other religious communities in its seven guest rooms. The open space ground floor can be used by Catholic schools for gatherings for their staff, faculty and students. Guillen adds that it is another source of income for their community.

A key source of their income is the baking of altar breads. They produce over three million pieces of small hosts and about 6,000 of the big hosts per year, using equipment imported from Italy. They supply the Communion hosts for the Zamboanga Archdiocese and the nearby dioceses. One nun is in charge in the production— including the mixing, baking, cutting of the wafers, counting and packing, and assisted by four hired workers.

"It has always been the mind of our holy foundress, St. Teresa of Avila, that the nuns should live simply and to work for a living. Our other needs will be provided by God," explained Guillen.

They also sell "host cuttings" from the wafers; some are re-toasted while others are re-mixed with different flavors and baked into cookies, which are sold in their small store near the main gate.

"For our other needs, the loving providence of God has never failed us, through alms and charities of people touched by God, friends and benefactors who have remained faithful through the years," Guillen said.

"A Carmelite nun's mission in life, her one aim and goal, and whole meaning is to serve the church through her life of prayer," says Guillien, who is now in her late 70s.

Life in the cloister has "an atmosphere of gentle silence," she said, where "prayer pervades the whole day of a Carmelite. Her day begins and ends with prayer." 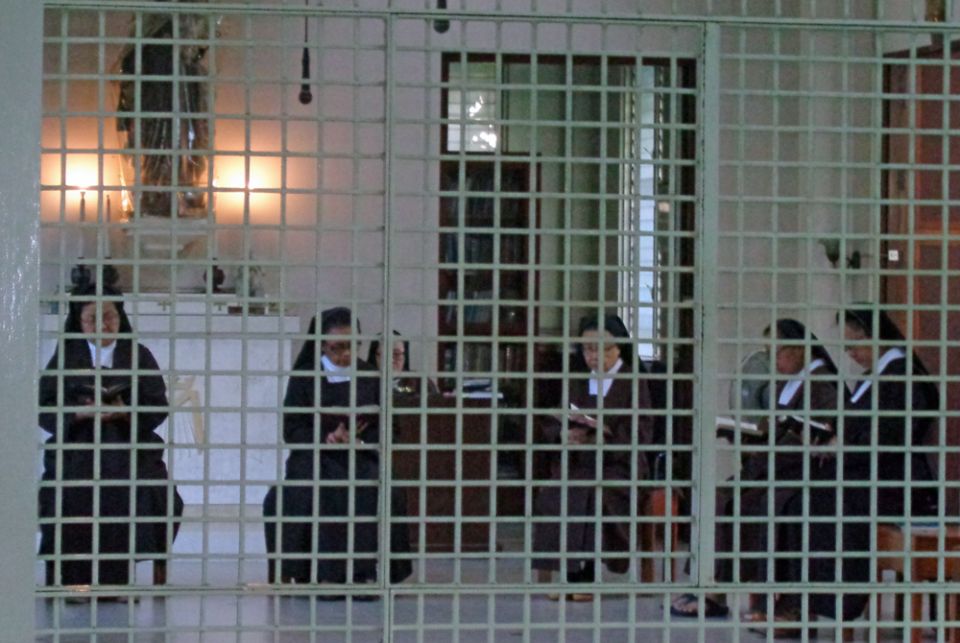 The Carmelite nuns chant the mid-morning prayers of the Liturgy of the Hours. (Charity Durano)

Seven times each day, the community gathers to either celebrate the Eucharist or chant the Liturgy of the Hours. Each nun then has two hours a day scheduled for silent prayer, "but the spirit of prayer overflows into the hours of readings, study, work and recreation." A Carmelite usually stays in her room to pray and meditate on the Word of God, unless she has other duties.

This gentle pattern of life was interrupted for at least two weeks in September 2013, when armed rebels from a separatist Muslim group laid siege on the city in an attempt to declare an independent state. The monastery happens to be located between City Hall and the military base where operations against the insurgency were launched. 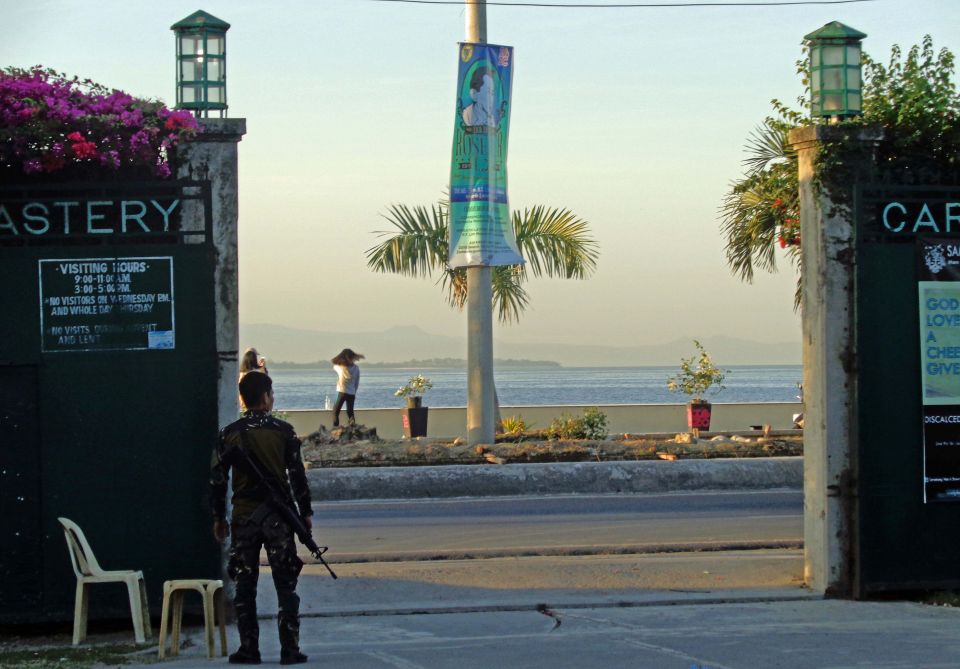 An armed soldier stands guard at the gates of the Carmelite monastery, which is located along the coastal boulevard in Zamboanga City. (Charity Durano)

"The scary part was when a military plane would fly over the city and the rebels fire at them. Of course, they are not going to hit the plane. The bullets come back down," she remembered. With the second floor of their monastery made from wood, all the sisters had to move downstairs. "Actually, the safest place for us at that time was in the area where we pray."

Their regular work stopped during these weeks. Instead, they cooked three sacks of rice a day for evacuees, which numbered about 120,000 people. "Even in the midst of that, we kept to our values, even silence; but we did pay closer attention to each other to check whether some sisters were getting too stressed."

There is relative quiet in the city nowadays. The visible reminders of the underlying tensions are the presence of armed military personnel stationed a few feet away from key religious sites, including the Catholic cathedral. In the monastery, an armed member of the military stands guard at the gate and is the one to let a visitor into the compound. His companions stand farther away, watchful of all the visitors and vehicles that enter the compound.

On weekday mornings, at around 5:45 a.m., several members of the public start entering the monastery compound to join the Carmelite nuns for their 6:00 a.m. Mass. The nuns are seated off to the right side of the altar where they have been praying the Lauds. Part of the grille that separates the cloister is opened just before Mass starts. The nuns then lead the congregation in the singing and one of them is assigned to do the reading. 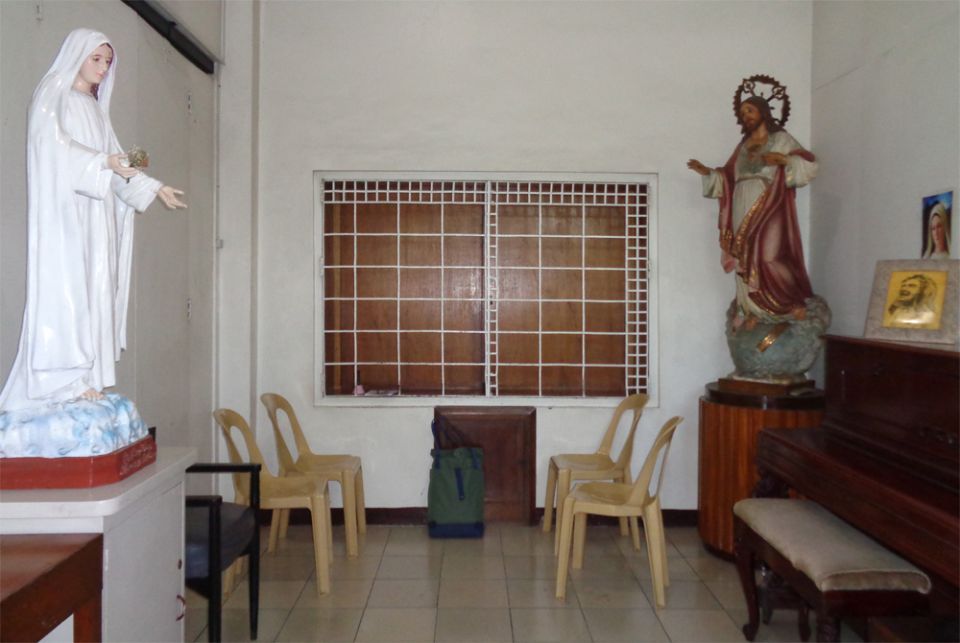 They allow visitors twice a day in two-hour time slots, except on Wednesday afternoons and all day Thursday. No visits are allowed during Advent and Lent, times dedicated to deeper silence. Each nun sets her individual schedule for unlimited prayer time with meals taken in silence and no recreation during these seasons.

Visitors who wish to speak with one of the nuns are brought to a receiving room where they wait for wooden panels to open and speak with a nun behind a grille. Guillen said any part beyond the grille is considered beyond the cloister.

When visitors ask for guidance and prayer, Guillen says she tries to help them figure things out for themselves. She recounts how St. Teresa of Avila wrote of the difficulty people have reflecting upon their life, not knowing what they are looking for, and yet trying to find purpose.

"If a person just tries to spend 10 minutes every day with Jesus, their prayer will eventually bear fruit, that of self-knowledge and knowledge of God," she said.

[Charity Durano is a journalist based in the Philippines.]