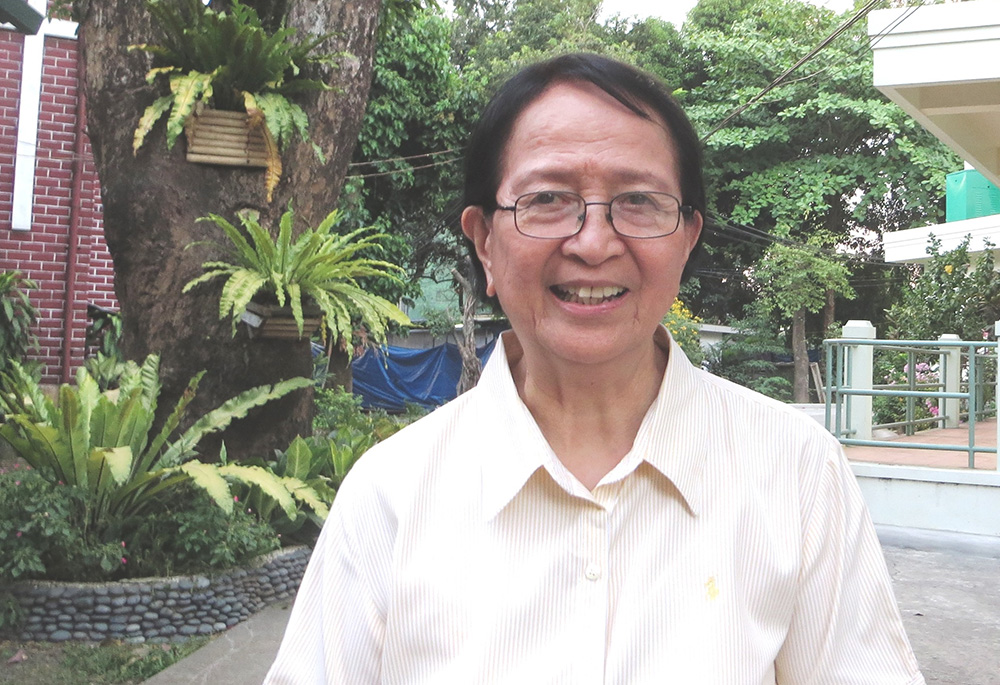 Religious of the Good Shepherd Sr. Elenita Belardo: "I am at peace because I did not lie." (Ma. Ceres P. Doyo)

Days after the acquittal of Sr. Elenita Belardo, a Religious of the Good Shepherd, and nine other defendants in a perjury case brought by an adviser of former President Rodrigo Duterte more than two years ago, the Religious of the Good Shepherd of the Philippines-Japan issued a statement celebrating the acquittal and pledging to continue its work to aid the poor and marginalized.

"Moving onward, as a congregation, we re-affirm our commitment 'to promote justice' and to 'help bring about change in whatever condemns others to live a marginalized life,' " read the statement, which was posted on the congregation's Facebook page. "In the spirit of synodality, along with fellow churchworkers and human rights defenders, we continue walking with and among the poor, listening to and including voices from the margins and holding our ground despite threats and political repression."

Belardo said "the decision of acquittal by Judge Aimee Marie Alcera on our perjury case brought so much joy to me and to my 9 friends," in a statement to Global Sisters Report.

In her 45-page decision issued Jan. 9, Alcera wrote that all of the accused must be acquitted as the prosecution had failed to establish "beyond reasonable doubt" that they had made a "willful and deliberate assertion of a falsehood."

The case was closely watched by religious, church authorities and human rights groups. A few days before the decision, the Good Shepherd sisters staged a small rally outside their Quezon City convent. Some of the placards read: "Defend the Defenders" and "Stop the Attacks." They were supported by One Faith, One Nation, One Voice, a network of church leaders "for truth, justice and peace" as it describes itself.

The network's statement, signed by Catholic bishops, religious sisters and Protestant leaders, said: "Our nation depends on the freedom of human rights defenders to speak out against threats, harassment, and other abuses by the government. Allowing these defenders to be unjustly and viciously targeted not only endangers their lives and liberty, it increases the vulnerability of every human rights advocate who acts to defend the rights of the people."

The case stemmed from the filing in May 2019 with the Supreme Court of a petition for protection (called a "writ of amparo") by three human rights groups who felt threatened by "red-tagging," or being accused of being "communist" by military and government authorities.

Among the petitioners were members of the intercongregational Rural Missionaries of the Philippines, or RMP, the human rights group Karapatan and women's advocacy group Gabriela. Belardo has been with the Rural Missionaries Group since 1977 and has served as its national coordinator.

Founded more than 50 years ago, Rural Missionaries of the Philippines is one of several mission partners of the Conference of Major Religious Superiors in the Philippines. It had been tagged by the Duterte administration as a "communist-terrorist front" and its funds, some from the European Union, have been frozen.

While the Supreme Court granted the petition, it prompted the Duterte administration to accuse them of perjury. Gen. Hermogenes Esperon Jr., then-national security adviser of then-President Duterte and vice chair of the National Task Force to End Local Communist Armed Conflict filed a "criminal complaint for perjury" in July 2019, stating that the petitioners "lied under oath."

The perjury accusation stemmed from a statement in the filing that RMP was registered with the Securities and Exchange Commission when in fact, the registration had already lapsed. That, to Esperon, was perjury.

In the trial memorandum, the lawyer for the 10 defendants argued that the SEC registration was not even material to the amparo petition and that prosecution failed to discredit Belardo's invocation of good faith. In her judicial affidavit, she had stated: "I am at peace because I did not lie."

She testified in the trial that she had hoped the petition "would protect us from respondents' [Esperon et al.] acts of red-tagging and harassment that threaten our security and safety."

In its statement, the Good Shepherd sisters said that they celebrated the acquittal. "Sr. Elen, at 83, a gentle follower of Christ, along with her fellow human rights defenders had been walking and working with the poor, the vulnerable and the marginalized and in doing so caught the ire of the mighty and powerful. We are aware of how elusive justice can be for the poor and the perceived enemy of the state while it comes swiftly for those in power. The recent court decision is a glimmer of hope amidst the dark times our nation is living in."

The statement thanked supporters of Belardo and the Rural Missionaries of the Philippines, and thanked "Sr. Elen, who with tenderness and sincerity, unflinchingly faced the 'goliaths.' She has inspired us with her faith, courage and unwavering commitment to the farmers, fisherfolks and indigenous peoples whom she untiringly served through the RMP all these years. The acquittal is not only a victory of those accused but of all 'God's little ones' for whom and with whom this struggle is being fought and continued."

In a message to Global Sisters Report from Edita Burgos, one of the acquitted, a member of the Third Order of Discalced Carmelites and whose son Jonas is a desaparecido (disappeared), allegedly abducted by military elements more than 10 years ago, she expressed gratitude "to HIM who ordains all things followed the initial unbelief upon hearing the word 'ACQUITTED.' After more than three years of teetering between believing in His justice and mercy and accepting the reality that in the Philippines the ability of those in power to twist the truth and influence judicial processes to favor them, this acquittal is a downpour on parched land."