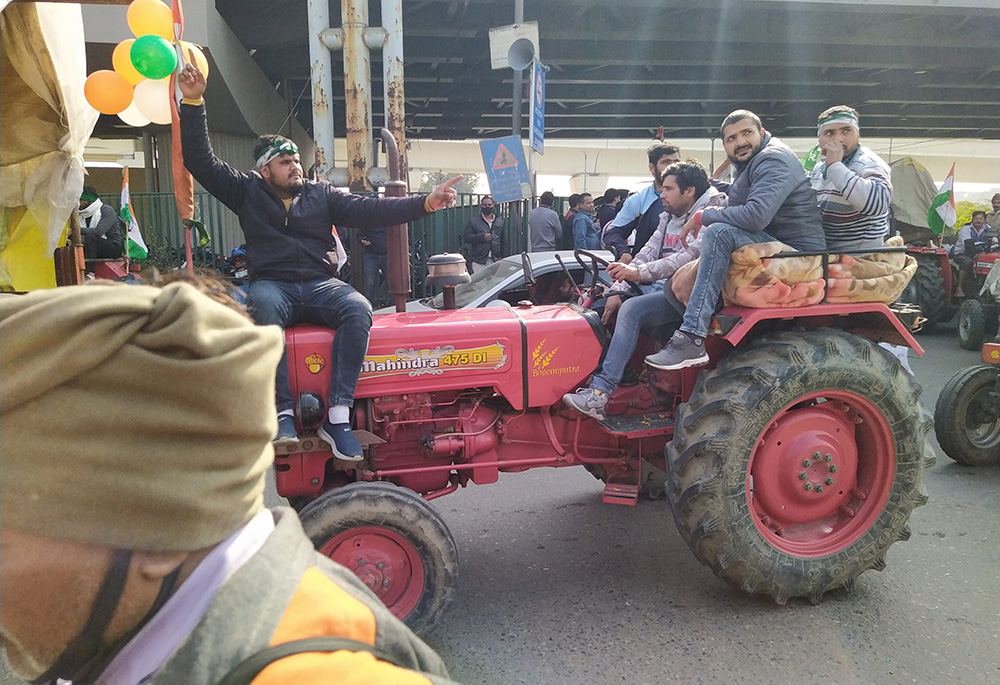 Farmers come to the Indian capital on tractors to protest three controversial farm laws that were later repealed after a year of demonstrations outside Delhi. (Jessy Joseph)

Catholic nuns are rejoicing in the success of an historic yearlong protest by India's farmers against federal reforms that deregulated crop prices and opened fields to corporate interests. Many hail the farmers' stand as the country's second freedom movement, the first being Gandhi's.

Sr. Jyoti Pinto, former superior general of the Bethany Sisters in Mangalore and a social worker, applauded the victory of "the longest post-independent struggle in India with the weapon of non-violence."

India won independence from the British in 1947 after decades of nonviolent protests led by Mahatma Gandhi.

Praising the farmers' perseverance, Pinto told GSR, "It is an indication that democracy is still alive in India." 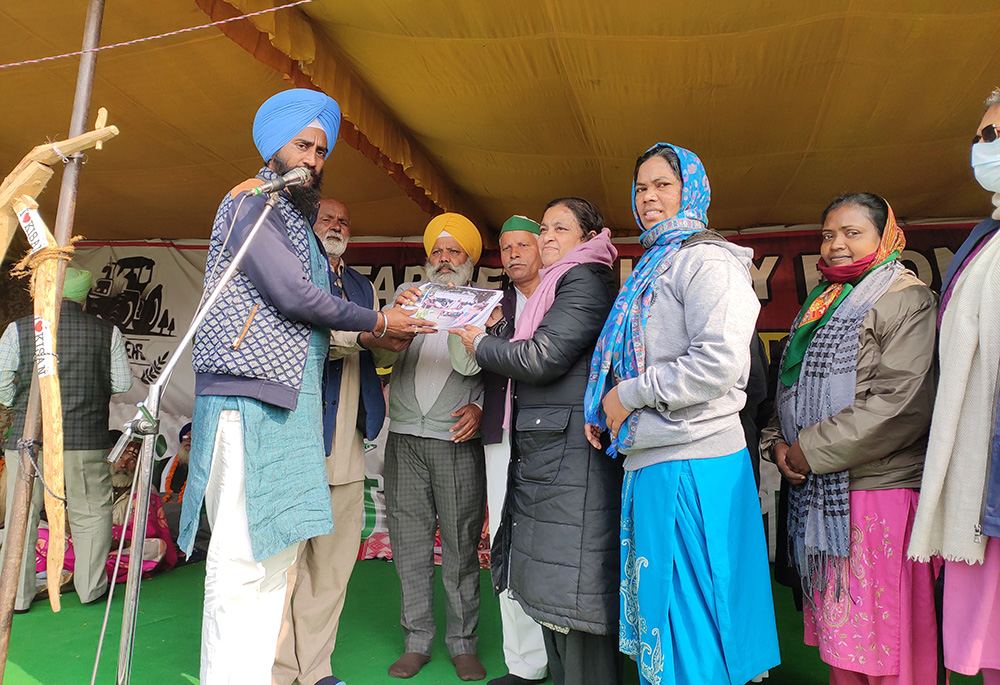 Presentation Sr. Dorothy Fernandes (in black coat), national secretary of the Forum for Justice and Peace, presents signatures she collected from her base in Patna in eastern India to support the farmers' protests in Delhi, India's capital. (Courtesy of Dorothy Fernandes)

Over the weekend of Dec. 11 and 12, the farmers began folding up their camps outside Delhi, the nation's capital, after the legislature made good on the federal government's agreement last month to repeal three controversial 2020 agricultural reforms, drop criminal proceedings against demonstrators and consider adopting minimum crop prices.

Thousands of farmers had camped on the borders of Delhi since Nov. 26, 2020, and more than 700 of them died from the effects of extreme heat, cold and COVID-19. A few took their own lives.

Welcoming the success of "the longest and greatest historical protest in the entire world," activist and Presentation Sr. Dorothy Fernandes, says farmers "have given a loud and clear message of what is possible if we are united in purpose and not afraid to pay the price."

Fernandes, the new national secretary of the Forum of Religious for Justice and Peace, an advocacy group for Catholic religious, told GSR that the farmers won because of their "clarity of thought and meticulous organization of people and resources." 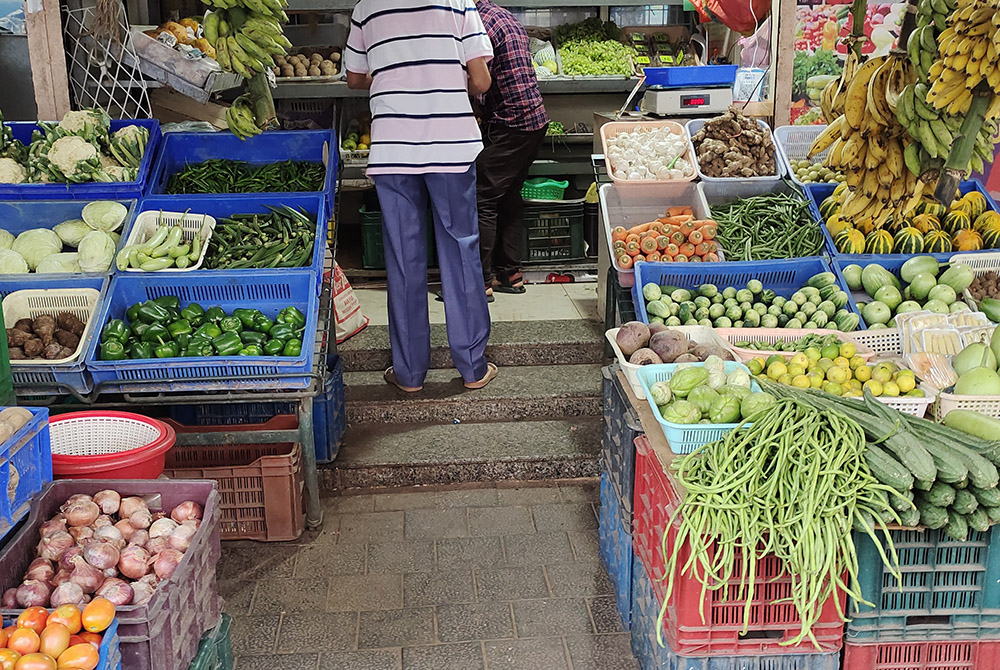 A vegetable vendor's shop in Mangaluru (or Mangalore), southern India. Farmers were protesting new laws that paved the way to give corporations control over the agriculture sector in India. (Thomas Scaria)

The farmers were led by the Samyukta Kisan Morcha, or United Farmers' Front, a coalition of more than 40 farmers' unions formed in November 2020.

The protests began after the government hastily passed three farm bills claiming to overhaul the country's agricultural sector and benefit the farmers. The farmers, on the other hand, saw the laws as a ploy to turn over farmland and markets to corporate interests, undermining their ability to make a living. 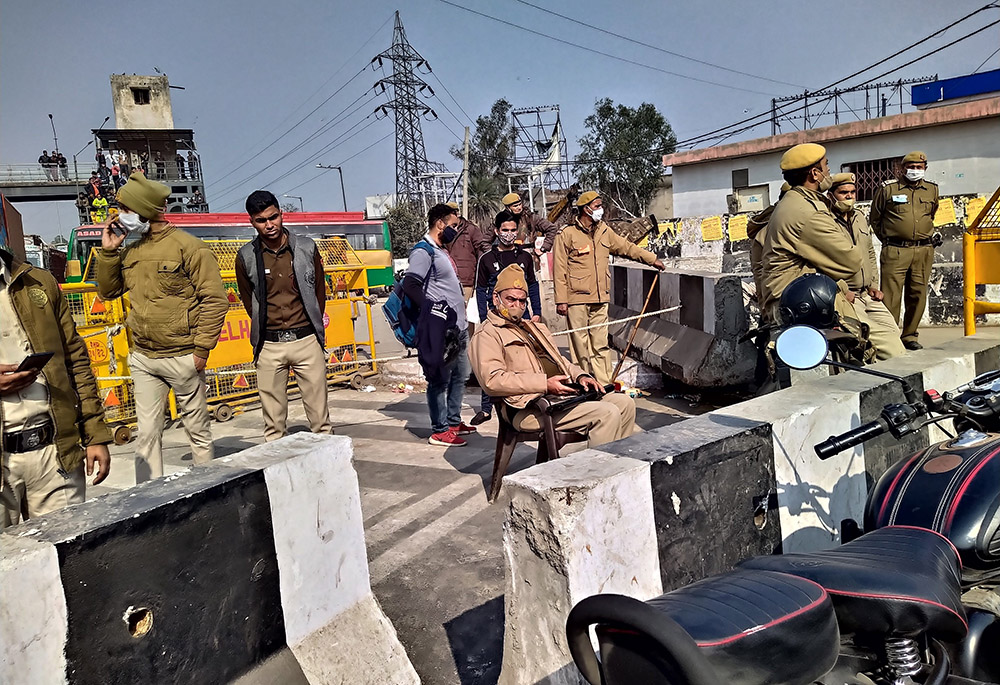 The protests began September 2020 in Punjab in the north and spread to other states in India. As the government refused to heed them, the farmers came to the national capital. After their entry was denied, the farmers camped at three main entry points to Delhi.

The government and the farmers had several rounds of futile discussions initially. Meanwhile, members of the ruling Bharatiya Janata Party and its supporters labeled the farmers anti-nationals funded by overseas Sikh secessionist groups.

The laws also favored corporate control of the production and distribution of the food crops. The traditional farmers, especially from Punjab, Haryana and Uttar Pradesh, opposed them. The protesting farmers attracted national and international support for their demonstration.

The government of Prime Minister Narendra Modi and the farmers were sharply at odds for a year. Modi Nov. 19 surprised the farmers and others by announcing the repeal of the farm laws while addressing the nation. The parliament followed it up a week later by repealing the laws without debate.

Some state governments announced compensation to the relatives of the farmers who had died on the Delhi borders.

The farmers' union leaders say they will review the situation Jan. 15, 2022, and relaunch the protest if the government fails to keep its promises.

Fernandes' forum was among Catholic groups that had backed the farmers, although the official church bodies in India stayed away from the stir. 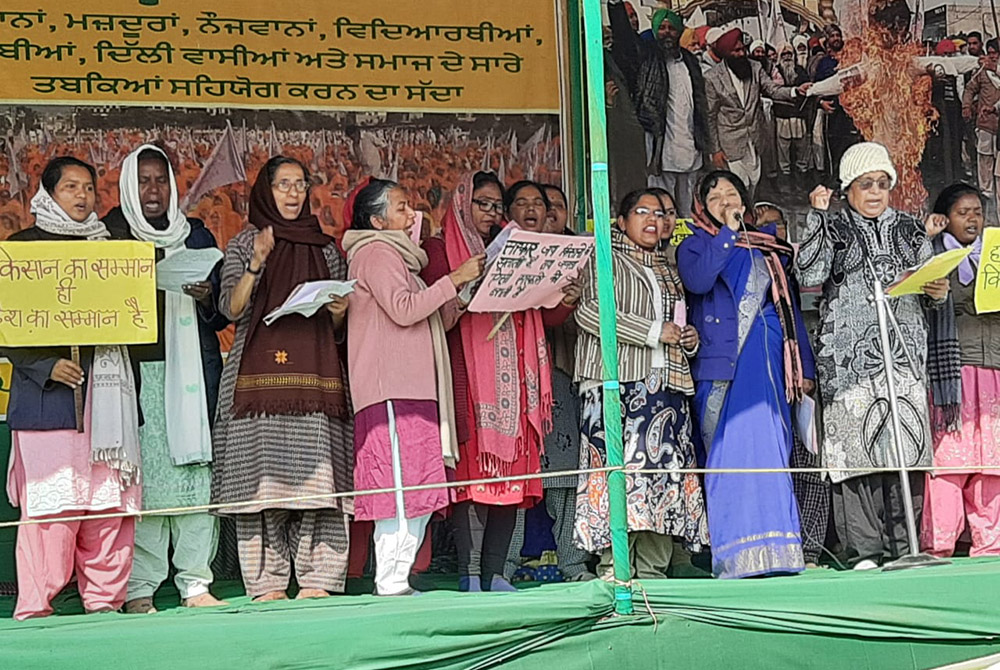 Presentation Sr. Dorothy Fernandes (at far right in white cap) and Catholic nuns offer a song of support to farmers protesting on the border of the Indian capital. (Courtesy of Dorothy Fernandes)

Fernandes and her forum members came to New Delhi to join the farmers. She says the farmers' protest has helped highlight "the meaning and understanding of struggle in a peaceful democratic manner."

She hails their determination and sense of purpose, saying, "Even the loss of lives of their brothers and sisters did not deter them from their goal. Instead, the deaths only strengthened them and encouraged them to keep going."

Presentation Sr. Shalini Mulackal, a leading woman theologian in India, also had joined the farmers on the Delhi borders on several occasions, after realizing the farm laws were aimed at "changing the way agricultural produce is marketed, sold and stored across the country."

She says she is convinced that the main purpose of the farm laws was to benefit a few corporate houses in India.

The farmers' protest, she says, was against "the injustices embedded in the new farm laws" that would have harmed not just the farmers but millions of consumers with big business controlling production and supply.

"I look at the farmers' protest as a sign of hope. They are the only group protesting against the present government and their policies, which are anti-poor, anti-minorities and anti-people," says Mulackal, who labeled the dispute a "second independence movement" of India. 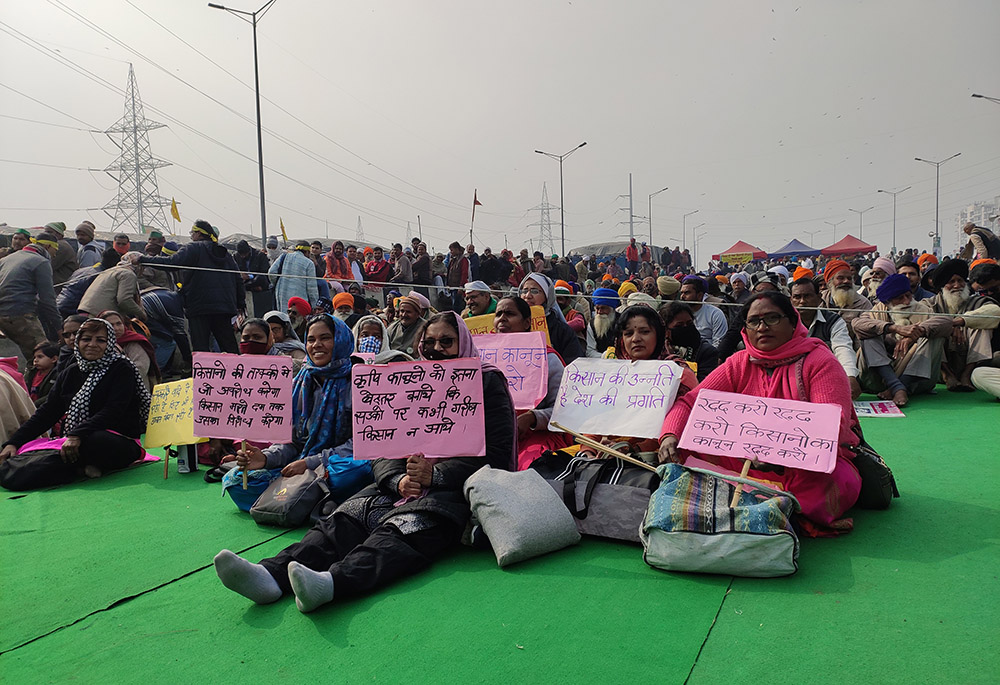 Catholic nuns join women supporting the farmers’ protests on the borders of the Indian capital. (Courtesy of Dorothy Fernandes)

The farmers' victory has enthused Holy Cross Sr. Vijaya Sebastian, a social worker and health care activist in a few northern Indian states and a supporter of the farmers' actions.

"We have to wait and see if the government keeps its promises. We need the deliverables, not the promises," says Sebastian, who directs the Holy Cross Consortium with nearly 2,000 members in eight provinces in India.

Another supporter is Sr. Ajitha Mathew, a social worker who manages a movement of women farmers in the northern Indian state of Uttar Pradesh. The member of the Sisters of the Queen of Apostles welcomes the farmers' victory but remains skeptical about the government keeping its promises.

"I cheer the farmers' victory after more than a year of protests in the open, fighting scorching sun and freezing winter, and the pandemic," she told GSR.

Mathew plans to celebrate the victory with her women associates on Dec. 23, which is designated as Farmers Day in India.

Sr. Jofi Joseph in Kerala, southern India, welcomed the end of the farmers' protest and called for pro-farmer legislation. The member of the Congregation of the Mother of Carmel made headlines in September after the Kerala High Court allowed her and 15 others to kill wild boars that destroyed crops. The wild beasts are as damaging to farmers as corporations, she told GSR, speaking in Malayalam. 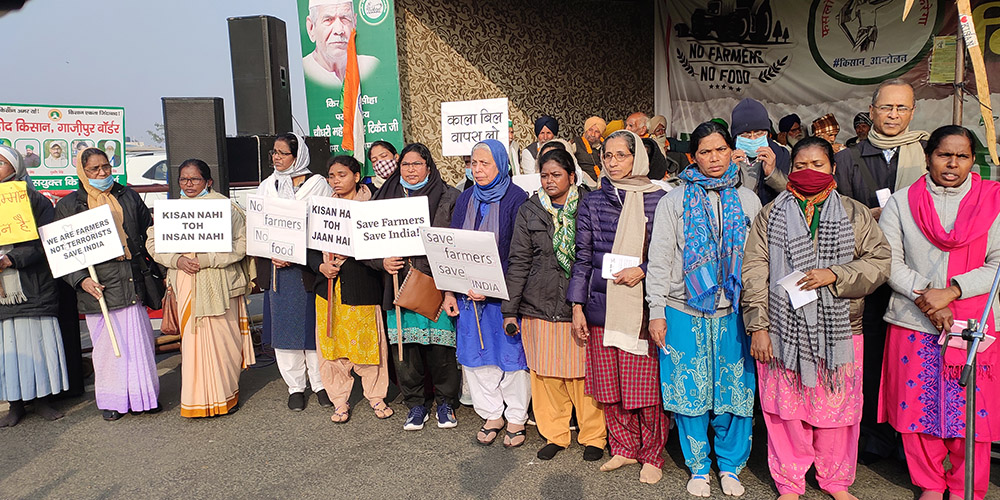 Catholic nuns and a priest with Forum for Justice and Peace and some members of the Delhi unit of the Conference of Religious India join the farmers protesting outside Delhi. (Courtesy of Dorothy Fernandes)

"It is a big victory for the farmers, whatever may be the political compulsions for Prime Minister Modi," says Indian Missionary Society Fr. Anand Mathew, who had joined the protesting farmers in Delhi with other priests and nuns.

The farmers' victory "is an inspiration and tremendous encouragement for those of us who are on the path of Satyagraha [a form of nonviolent protest, propagated by Mahatma Gandhi]," said the activist priest, who organized a series of protests, rallies and meetings on the farmers' issue in Varanasi, his base in Uttar Pradesh state.

"We Farm," a farmers movement in Kerala, welcomed the end to the protest but hinted the farmers will wait for the actual implementation of government promises.

"Showing our solidarity with a group that is clearly standing against anti-Kingdom values is the least we can do as Christians," asserts the nun who said she was privileged to spend time with the protesting farmers.