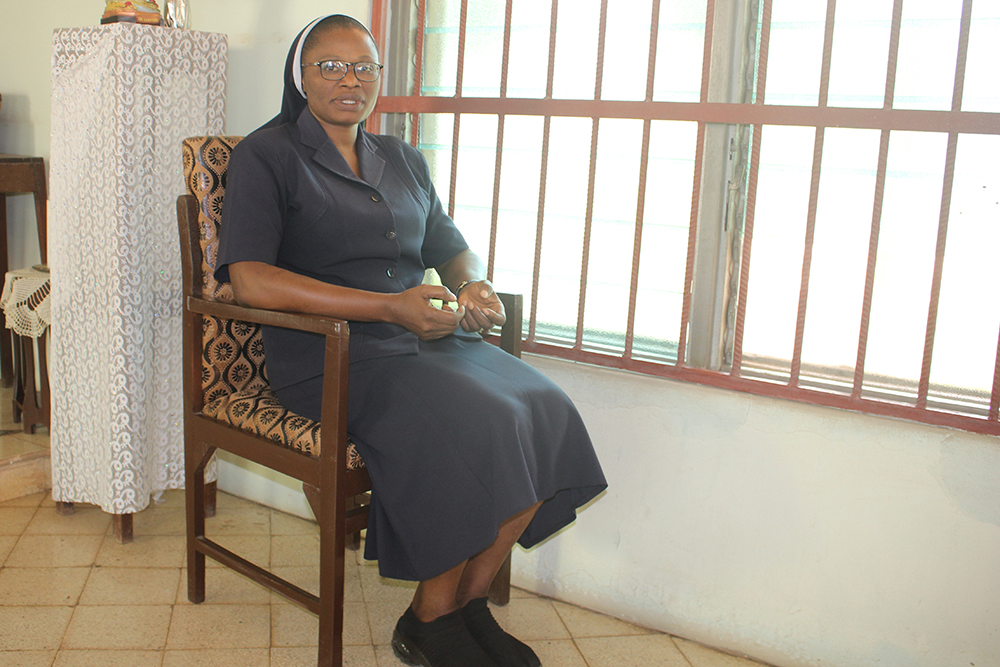 When Sr. Bukola Familade left her career in accounting to become a nun, she had no clue what she was going to face, but her passion was built around living a life of chastity. It's an ambition she had nursed from her childhood.

"My parents vehemently opposed my quest to become a nun because they didn't like the idea, being their first child of five children," she said. "They wanted me to become a merchant banker. It later took the intervention of neighbors, family members, friends and the Holy Spirit for them to give in."

Bukola was born Oct. 15, 1975, to civil-servant parents in Ado-Ekiti in Ekiti state. She spent most of her childhood in both Ekiti and Ondo states in southwestern Nigeria.

Her interest in religious life started growing at Mount Carmel Girls Secondary School in Arigidi, Ikare Akoko, Ondo state, where she was taught by Sisters of St. Louis, a Catholic congregation founded in France in 1842 by Louis Marie Eugène Bautain. She joined the congregation in 1995 and professed her final vows in 1999. Currently, she is a teacher at St. Louis Nursery and Primary School in Owo, Ondo state.

"The journey in the ministry as a nun hasn't been easy, but I have been able to forge ahead because it's a call that I responded to by myself," she said. "I found solace in it, and the grace of God has been keeping me afloat through it all."

Familade discussed with Global Sisters Report the precarious nature of being a member of the religious community amid growing insecurity and persecution of the Nigerian church. 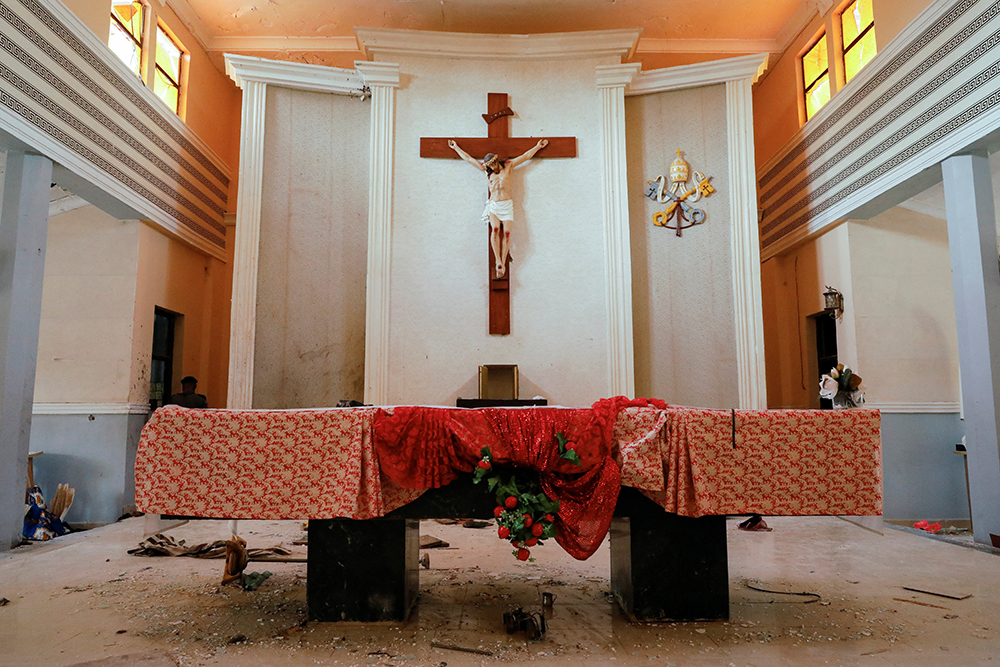 The altar of St. Francis Xavier Church in Owo, Nigeria, on June 5, the day after gunmen attacked worshippers. In August, Nigerian officials identified six suspects arrested in connection with the attack that killed 40 people. (CNS/Reuters/Temilade Adelaja)

GSR: There have been so many attacks on the church, coupled with abductions and killings of priests in Nigeria. Does this leave you feeling discouraged about the future?

Familade: We are being threatened but not discouraged, and it seems to me like a targeted and planned attack on the church.

Before now, the habit and cassock used to be our pride, but now, we are afraid to wear them when going out, especially the priests going out in their cassocks. We are being targeted, kidnapped, and sometimes killed. With our veil on, we tend to be hypervigilant to be sure that we are OK where we are. We now live in fear because we know that we are vulnerable, and this is traumatizing for us.

Why are there targeted attacks against the church, priests and nuns in Nigeria?

I think one of the reasons is the belief that the church is rich. When some sisters were kidnapped some time ago, their kidnappers were saying that the church has a lot of money to pay for their ransom. We told them that we are not rich, that we only put resources together since we are all one. So, once any priest or nun is kidnapped, they know that the church will rally around to secure their release through payment of ransom.

The church is faced with so much persecution, especially the Roman Catholic Church, perhaps because it's the first Christian denomination in the world. It's just like striking the shepherd so the sheep will scatter, and we see that happening across the country today with church shootings, abductions and killings of priests and nuns to instill fear in believers. They know that the Catholic Church has a huge population and getting her out of the way will make it easy for them to handle other denominations.

It is important to note that the Catholic Church is built on a solid rock, and despite all the attacks and persecution, the church is still standing. It exudes so much authority that makes the government tremble when it speaks, and that alone is like a threat to them. 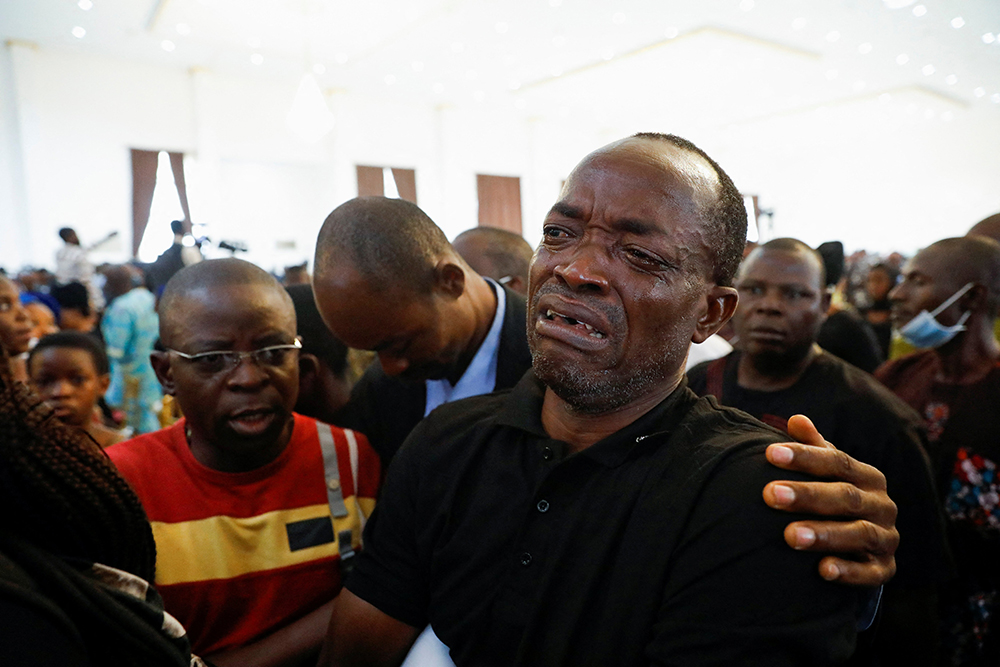 A man cries during a funeral Mass on June 17 in the parish hall of St. Francis Xavier Church in Owo, Nigeria. The Mass was for some of the 40 victims killed in a June 5 attack by gunmen during Mass at the church. (CNS/Reuters/Temilade Adelaja)

How is this affecting your spiritual life, the ministry, and the body of Christ in general?

I have been hypervigilant since that attack on our church here in Owo. The anxiety I feel is just alarming. Whenever the gate is opened during morning or Sunday Masses, we look back. We want to see who is coming and what he or she looks like, and this can be distracting during Masses.

After this church shooting, another attack happened here in Owo. It was an attack on a company, and the sound of the dynamite explosion was like the explosions we had at St. Francis Xavier Catholic Church. So, we live in fear because we don't know where or who could be their next target.

The kidnappings and attacks have created tension to the extent that we find it difficult to move around or have rallies. Most of our meetings are done online. We no longer travel, and this has so much effect on our lives as members of the religious community.

Amid this lingering insecurity in the country, how are you holding up?

We are forging ahead well. This is not the first time the church is being persecuted. Even though it is happening now, in our own time, it has happened before, and the church is still standing.

As members of the religious community, we wake up in the morning, observe our prayers and commit the day into God's hands because people look up to us, so our faith must not be shaken just to encourage our brothers and sisters in the Lord. Whatever happens while we are on any assignment, we pray for the will of God to be done. It's better to be with the Lord than to deny him. There is nothing new on Earth. What we are facing now, those before us have faced.

Can you recall any childhood memories that impacted your faith and life of chastity?

Even when I was still a catechism student, I was so eager to receive holy Communion. I used to meet with sisters, and I admired the way they handled us as children. They would teach us songs, and we'd observe the feast of Corpus Christi together. All these ignited my interest in the life of religious.

What does being a nun and a teacher in a deeply conservative society like Nigeria mean to you, and what is the greatest lesson that your work and Catholic faith has taught you?

One must be very patient with both parents and students in other to succeed as a teacher. Because of the economic meltdown Nigeria is faced with today, most parents prefer cheap or even free education. It is important to note that most parents, even non-Catholic parents, prefer Catholic schools because of the level of moral and discipline we instill in their wards.

Nigeria's kidnap-for-ransom has become a lucrative enterprise: Between June 2011 and March 2020, at least $18.34 million in ransom was paid to kidnappers, mostly by families and governments. Is this something to worry about, especially with nuns and priests being soft targets?

The best thing is for us to shun night journeys because it exposes us to these threats. We need to be mindful and careful of when and where we wear our habits and cassocks. We also need to be careful with our involvement in politics. We should mind how we speak about politics on the altar, outside the church, in office hours, and we should be diplomatic, too. We can also minimize vigils and evening prayers that may keep our members in the church very late to avoid predisposing them to danger.

What would be your message to other nuns and priests amid this cycle of violence and persecution?

My message is for us, including the priests, to continue praying for Nigeria and the world, for peace to reign.