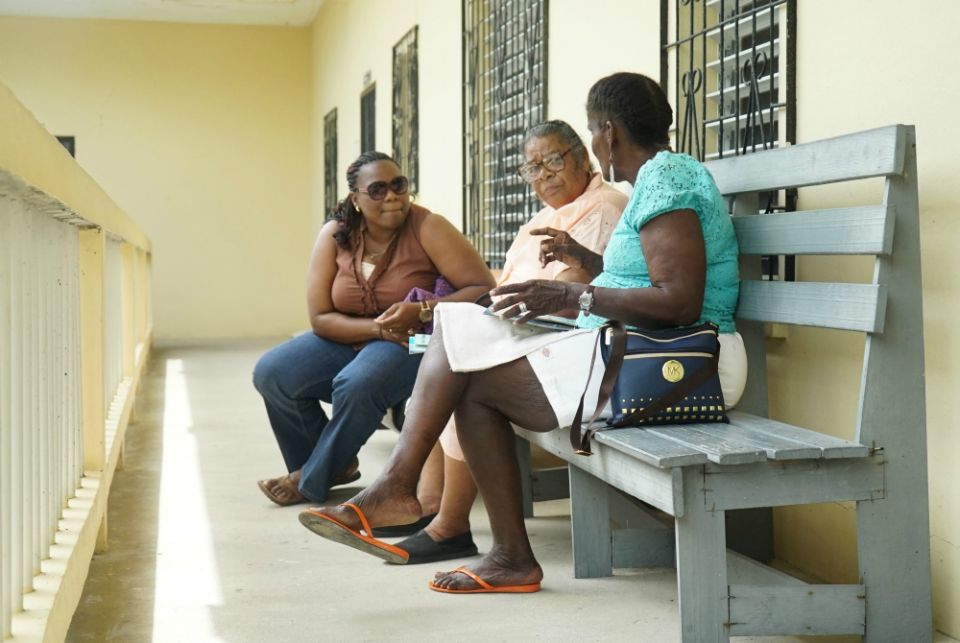 Though she is pursuing a master's degree in the United States, Sr. Carlette Gentle, left, a Sister of Charity of Nazareth, Kentucky, has been overseeing her ministry to the elderly in Belize City, Belize, from afar. She plans to return after her graduation in May. (Provided photo)

Growing up in Belize City, Belize, Sr. Carlette Gentle thought she knew the Southside area. But the more involved she got in social work in the area, walking the neighborhoods and visiting homes, the more she learned of the hardships that had otherwise been outside her vantage point — namely, the quality of living of local seniors.

In 2013, she earned a research grant from KentuckyOne Health that allowed her to spend the following six months exploring Southside Belize City by visiting homes and asking those older than 60 if they would answer a few questions so she could assess the needs of the geriatric residents.

"The more I did the interviews for the evaluation, [the more] I was finding out there was such a need to be heard and belong," she said. "I looked around, and there wasn't much available to that population. ... I thought if I started it, who knows, maybe somebody else will get into that trend."

Gentle, a 39-year-old Sister of Charity of Nazareth, will graduate in May from St. Louis University in Missouri with a master's degree in social work with a focus on gerontology. But from afar, she still runs her ministry, Living Independently in Full Existence (LIFE), which focuses on improving five dimensions of health and well-being among the elderly: housing, social supports, food access, medical care, and transportation.

GSR: What were patterns you saw in your evaluations?

Gentle: Five particular needs jumped out instantly: food assistance; transportation to and from medical appointments (it's difficult to catch a cab because you might be in a wheelchair or because you take a long time and the driver doesn't have patience, so they just won't go); linking them to a medical clinic for monthly checkups (some haven't been to the doctor in years); a support group (we have about 100 clients, so we split the group in half, and they come for a three-hour session and socialize with others). 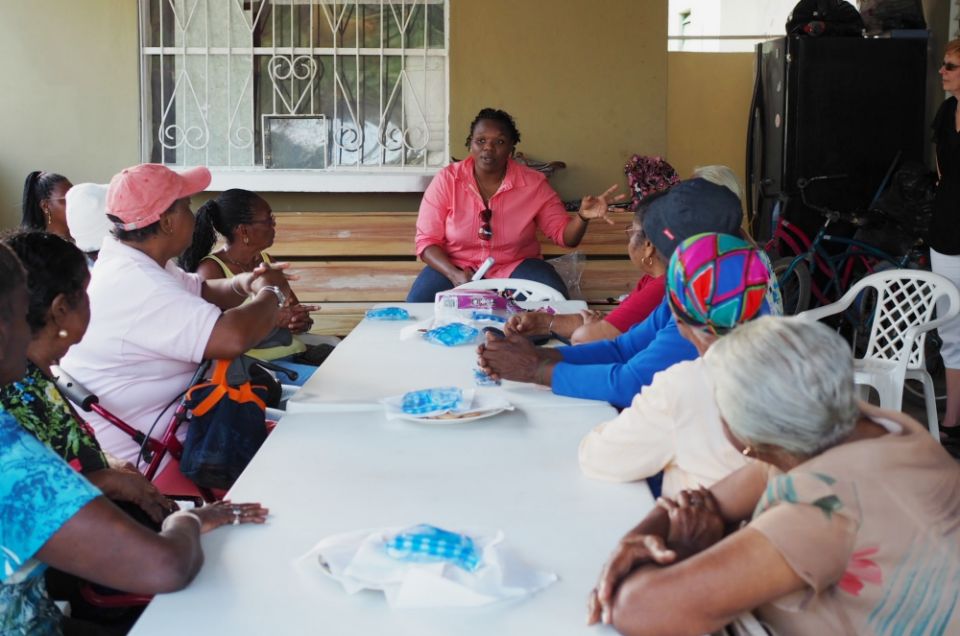 Sr. Carlette Gentle, 39, organizes socials for local elders so they can connect and get out of the house, often leaving with useful prizes won at bingo such as toilet paper and nonperishable staples. (Provided photo)

We assist with minor house renovations, as well. Someone might get a leg amputated because of diabetes, so we've assisted with putting in ramps or making a door wider. We've had a couple of seniors whose flooring was falling out. I would do these visits personally and see the condition that they're living in. Some homes I'm so scared to go in that I carry out the survey or whatever we're doing outside.

What of the survey results surprised you?

The magnitude of the need. Growing up in Belize, we always took care of our elderly. That has changed tremendously.

We've had trouble getting family members involved with their seniors. That's one thing that's shocked me. People are busy, they're not at home as much, and that's why I want to create a day center where they have a place to drop off their seniors so the family member doesn't have to think, "What's Mom doing at home?" or "I hope Dad doesn't leave the house because he won't remember how to get home." There's not that many resources or organizations where you can take your parents for the day. That's my dream, to do that.

I grew up on Southside, but I still did not know what Southside was like until I started walking the neighborhoods. "London bridges" — a rickety bridge that you have to cross over where you live — I've had to walk on those to get to some of the homes.

I remember this one woman, her house on stilts was falling down. We starting building her a house, and before we could finish, her house fell while she was in it. (She survived, but that was scary.) I'm thinking, wow, the level of poverty is so dire in some areas that it makes it even difficult for someone to survive.

We offer food assistance. We try to give basics that they can make a whole meal. But when we give that to a family, it doesn't necessarily go to the senior; it's feeding that whole family, and that senior sometimes won't eat until those grandkids are fed. We can't just take the senior into consideration by themselves. We have to look at the family taking care of them.

I'm curious how senior living has changed in Belize through the years and what a typical situation looks like now. Do they live with their families?

Most seniors still live in their homes with their children, but they're pushed to the side. Even though it's their home and they built it, in some of the situations I've seen, it's like there's no care in the world about that senior. Some of them can't wait for them to pass so that they can have their house.

We do see that there are some who care for their loved one tremendously, but the frustration goes up when they start to get slower or they start to forget things, and they don't have the training or the background to deal with these situations. We as caregivers give them training, but they don't come to it. Of course, if I was supposed to make a couple of bucks that day compared to sitting and listening to somebody, I'll make the money that I need to survive. So we're trying to come up with different ways of how we could continuously educate [family members]. 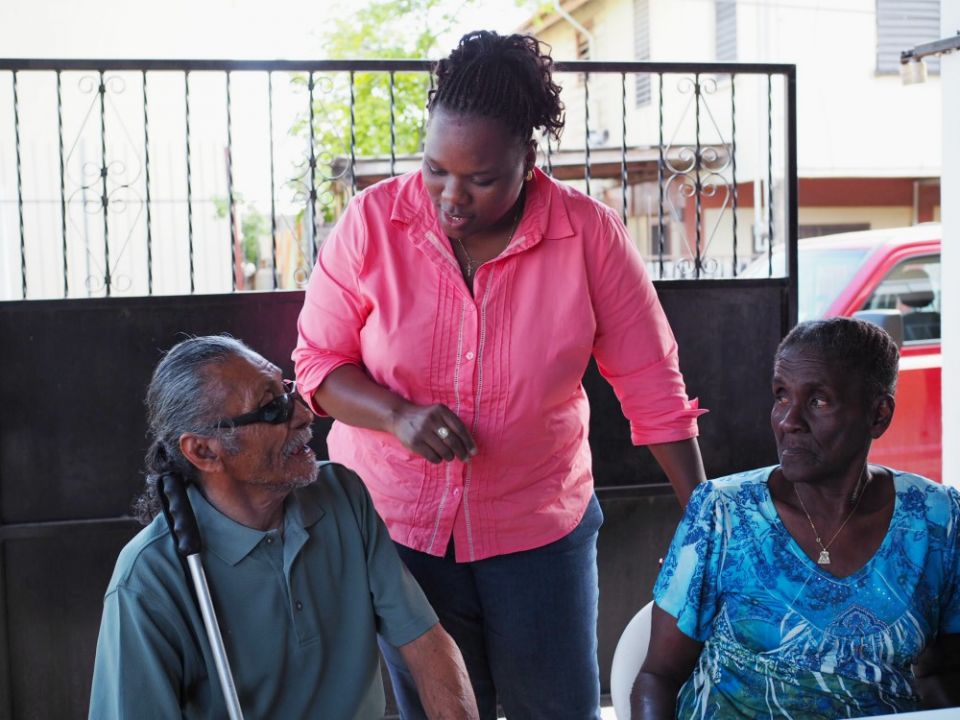 In the city itself, I know of one place that has a senior living center. But I wouldn't want to put my mom there if I had to. In a senior home, you want to have activities that would help stimulate the mind, get them out and do things. I see these seniors sitting around, and the level of engagement with each other is all they have. As a young child, we went there, and I remember this woman lying in bed with her mouth open, staring into space. That stayed in my mind all these years. People are not used to the cost of what it takes to put someone in a facility where they'd be taken care of 100%.

We've trained a couple of community health workers who are our extended arms and eyes. They'll come back and sometimes say, "Sister, you have to help such and such, because the rain comes through whatever side of the house, or it floods when it rains," so we have our share of the unknown.

I remember visiting one guy, and you're literally walking in water in his bedroom. He said the drain system is so close to his house that when it rains, the water comes right in. Mosquitoes start to develop, and Belize is a tropical country, so that leaves whatever sickness mosquitoes pass on. When he wakes up, his foot goes straight in the water, which causes sores on his toes. How can people live like this? That's one of the overwhelming parts of doing this.

We tried to help him and elevated the flooring in his room, which partially helped; the water was still there. The house would need to be lifted, and we can't do that since we only do minor renovations, so we added several inches of cement so it would be higher up and the water would not get in. It really is a struggle, what people go through. 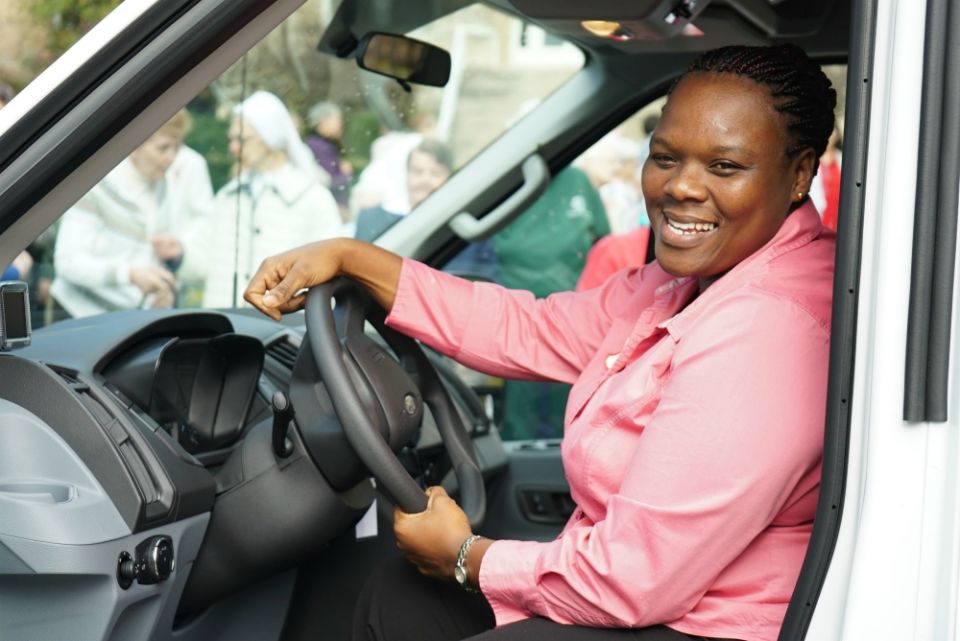 In Nazareth, Kentucky, Sr. Carlette Gentle drives a wheelchair-accessible van she was able to purchase after a fundraiser. The van was later sent to Belize City, Belize. (Provided photo)

How has this ministry affected how you look at senior living or accessibility for seniors in other parts of the world? What impression has it left on you?

The difference in working with the senior population in Belize and over here [in St. Louis] is, first of all, protocol. We don't have the protocols that the U.S. has in order to carry out something in Belize. I started this organization on my own, and whatever I created and what I had in my head is what came out. Here, you would have to work the opposite way: You'd have to go to an organization and find out what protocols are, what rules are, what facilities are needed, in order to do that.

If I build a facility in Belize, I'd want to learn a lot of about the protocols you have here, like: You have to have grab bars, or the bathroom doors or stalls have to be a certain width. I've learned a lot, so if I have to do another building that would accommodate the population, I now have a wider view of what these needs are that I can use there.

I'm just hoping that our population in Belize understands the importance of the elderly population, that there will be more people out there trying to advocate more for the needs of the seniors.

One thing that is common for seniors around the world is just the need to know they're human beings, that they're still being treasured, they're important, that they can still accept that love and appreciation from someone. They need to be heard, no matter what. I noticed that no matter where I go, India, Belize or the United States, that need is there to be cared for and loved.

Ministry | Q & A with Sr. Carlette Gentle, improving life for the elderly in Belize

Q & A with Sr. Mary McCauley, an advocate for comprehensive immigration reform