Q & A with Tom Stang, brother of Sr. Dorothy Stang 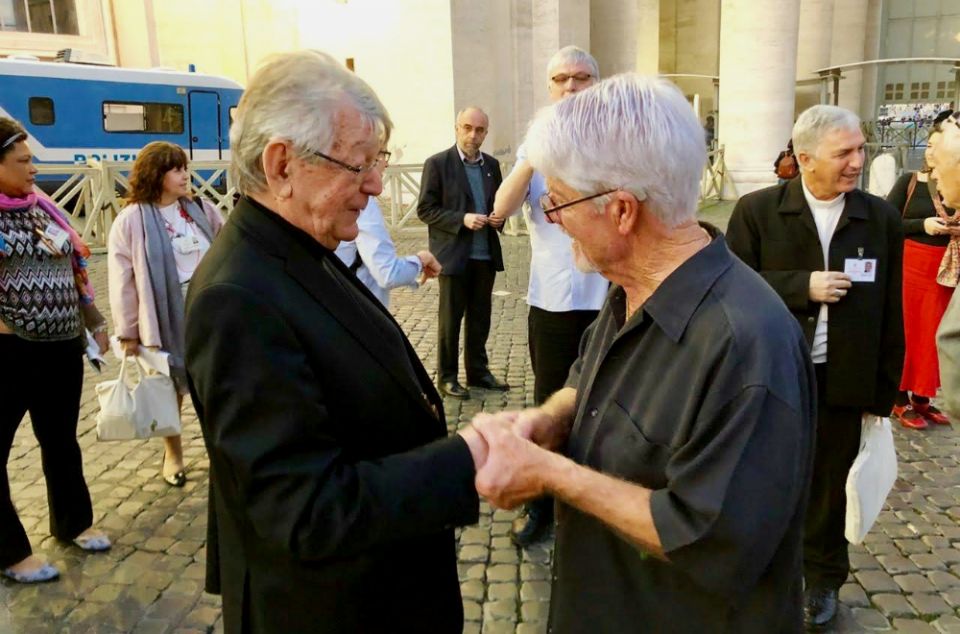 Tom Stang, right, meets retired Bishop Erwin Kräutler of Xingu, Brazil, at the Vatican's synod for the Amazon. Kräutler, a longtime environmental defender in the Amazon, was an ally of Notre Dame de Namur Sr. Dorothy Stang and presided at her funeral. (Courtesy of Regina Reinart)

Vatican City — As church bells rang and pilgrims poured from St. Peter's Basilica into its iconic square, Tom Stang was swarmed by hands and arms seeking to embrace him.

A brother of Notre Dame de Namur Sr. Dorothy Stang, Tom Stang was at the Vatican for the conclusion of the Oct. 6-27 Synod of Bishops for the Amazon — the part of the world his sister held dear and for which she gave her life in 2005, when hired assassins killed her. Over the course of nearly 50 years, she worked in Brazil, defending the rights of poor farmers in the state of Pará and their access to land against loggers and ranchers.

Throughout the synod's three weeks, Dorothy Stang and other martyrs of the Amazon were an ever-present touchstone.

Her story was told on the synod's official website. Her photo and those of other "martyrs of the Amazon" lined a wall in the synod hall. Her image also appeared at a tree-planting event for the feast of St. Francis of Assisi, during a Way of the Cross procession and in a special exhibit in the Vatican Museums. 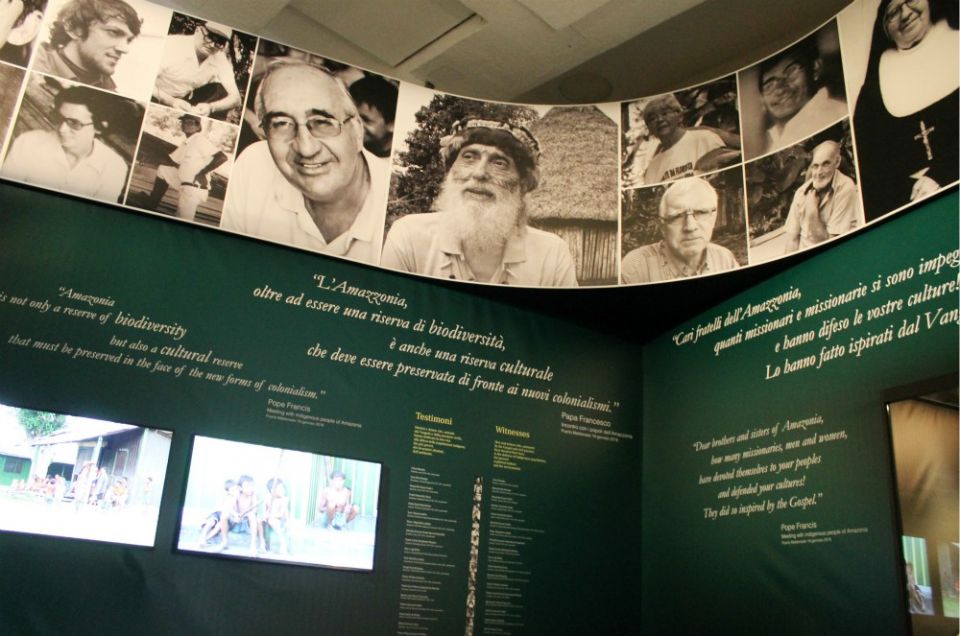 Sr. Dorothy Stang is pictured (top row, third from left) among the Catholic missionaries who have died in the Amazon region as part of a temporary exhibit in the Vatican Museums, "Mater Amazonia." (NCR photo/Brian Roewe)

And then there was Tom, a living memorial to Dorothy for many who bumped into him on the streets of Rome. The encounters with perfect strangers and even bishops fast became common. Even Boston Cardinal Sean O'Malley on his blog shared his delight in meeting Tom Stang and speaking about Dorothy's life and work.

Days before the synod's closing, Tom Stang fulfilled a goal by meeting with retired Bishop Erwin Kräutler, who led the Xingu prelature, Brazil's largest Catholic territory, from 1981 to 2015. (Following the synod, Pope Francis divided the territory into the Diocese of Xingu-Altamira and the territorial prelature of Alto Xingu-Tucumã.) It was the Austrian-born Kräutler who buried Sr. Dorothy Stang, with whom he worked closely as a longtime outspoken defender of the Amazon rainforest and its people.

By chance, Tom Stang crossed paths with Global Sisters Report on Oct. 27 in St. Peter's Square following the closing Mass for the three-week synod. He shared his thoughts on the synod and how his sister would react to the bishops' final document.

"I'm very impressed," he said of the document, a copy of which he picked up the night before at a Vatican press briefing.

GSR: What's been your takeaway from this experience?

So I am really glad I came. I thought I was coming just to give a little presence of her from the Stang family. And I had no idea that no matter where I went, people said, "Oh, you're Dorothy's brother? Oh!" It was like they were touching Dorothy. 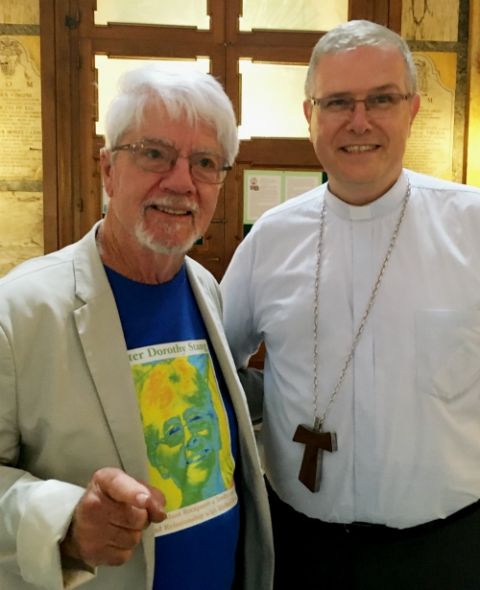 Tom Stang, brother of Sr. Dorothy Stang, left, meets with Bishop Johannes Bernardo Bahlmann, bishop of Óbidos, Pará, Brazil, Oct. 25 in the Santa Maria in Traspontina church in Rome during the Vatican's synod for the Amazon. (Courtesy of Regina Reinart)

What does that mean for you and the family, that people are coming up to you and recognizing her through you?

I was flooded with love. I was outside when all the bishops were coming out from their meeting, and, my God, they were lining up to hug me. I mean, bishops, cardinals. I was like, "Whoa." This group of bishops from Brazil, they are not pretentious or hierarchical. You really feel that they smell like the sheep. As Francis said, if you're a shepherd, you should smell like the sheep. Well, I think they do.

How do you think Dorothy would react to the Vatican holding this synod on the Amazon?

A delight that these two parts of her life, the Amazon and the church, were coming together in this way?

All these changes that they're talking about, she recognized them a long time ago.

She was working with Erwin Kräutler, a bishop that's got the biggest diocese in the world and the fewest priests in the world. And she would be out there, creating community with the only thing she had — namely, the Bible, the beatitudes — because they didn't have a sacramental system. They didn't have a priest doing Communion and confessions and so on.

The "Tent of the Martyrs" displays images of martyrs and witnesses of faith in the Amazon region inside the Santa Maria in Traspontina church near the Vatican during the Oct. 6-27 Amazon synod. (Courtesy of Regina Reinart)

So that's why I've come to the realization that ordination isn't really all that important as long as you have people creating community through Scripture, through the Bible. It's like the icing on the cake if a priest is able to come by once in a while. I think she would be delighted if women were a little more respected and given a role in the church that was equal. They're pulling the boat. There's no doubt about it.

With the final document, were there proposals you think Dorothy was advocating for or would have wanted to see come out of an event like this?

For sure, the one thing was the bishops saying that the church with all of its power has to divest from the corruption. I thought that was big. This whole concept of synodality — this is opening the door not just now for the Brazilians, but for other groups to say, "Hey, a centralized church where everything is the same everywhere, that just isn't so." So those are things I think she would really be extremely happy about.

She would come home every three years, and the consumerism in the United States would just absolutely blow her away. There was no Gucci bag for her, no jewelry. Her jewelry was basically her smile.

At various points, synod participants spoke about the way people live in other parts of the world impacting people in the Amazon — for instance, in the rainforest's destruction for logging and ranching. Would hearing bishops make those kinds of connections surprise Dorothy?

Dorothy really did have her finger on the pulse. She understood that all this excessive use of resources in the First World countries is totally impacting them [in developing countries]. 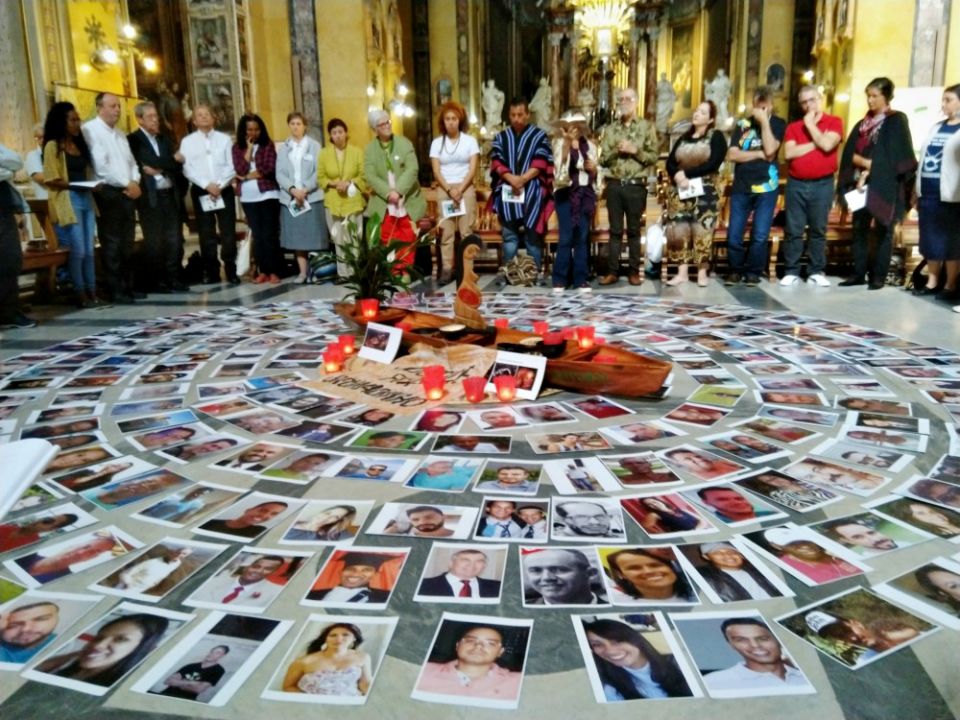 She felt deeply the fact that as a woman, she was not respected in our macho world, our patriarchal world. And she was the shepherd there in her area. She didn't feel oppressed by people like Erwin Kräutler. But I think in general, she understood that the church was still years away from living the Gospel according to the beatitudes.

Is it closer after this synod?

I think it's a step forward, yeah, with this whole concept of synodality and all this new vocabulary that we're now hearing. Integral ecology? I mean, she lived that. She lived the concepts, and I'm sure she's delighted.

[Brian Roewe is a staff writer for National Catholic Reporter. His email address is broewe@ncronline.org. Follow him on Twitter: @BrianRoewe.]

Q & A with Sr. Mary Owusu Frimpong, bringing health care to the margins