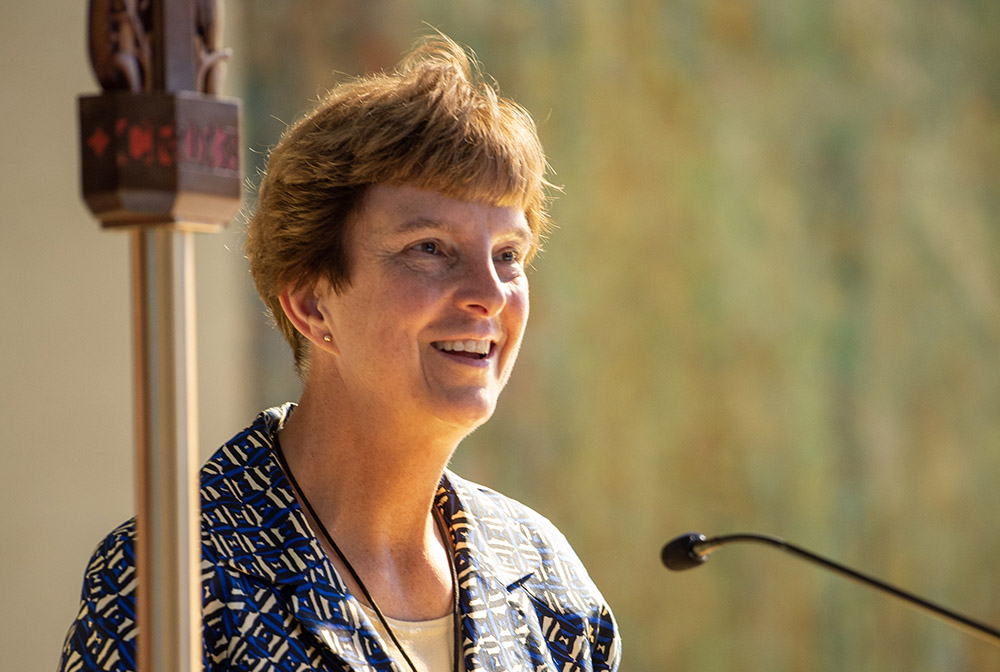 Editor's note: Pope Francis launched the Synod of Bishops on synodality in Rome in October 2021. This extraordinary two-year process is cause for hope for some and skepticism by others. But what is the synod, really? How did it come to be, and what are its aims? How will it intersect with the lives of women religious? To answer these and other questions, join Global Sisters Report for its upcoming Witness & Grace program March 31. Click here for more details.

Sacred Heart Sr. Maria Cimperman is a true believer in the Synod of Bishops on synodality.

Religious congregations have until March 27 to submit their responses for the synod. Cimperman and her fellow commission members will meet in April in Rome to begin synthesizing those responses for the General Secretariat of the Synod of Bishops and the Congregation for Institutes of Consecrated Life and Societies of Apostolic Life. The response must be filed by August.

The Vatican instructed UISG and USG to each choose two theologians for the commission, two representing each body; Loreto Sr. Patricia Murray, executive secretary of UISG, asked Cimperman to join the panel. Also on the commission are Sr. Gemma Simmonds, a member of the Congregation of Jesus and director of the Religious Life Institute at the Margaret Beaufort Institute of Theology in Cambridge, United Kingdom; Claretian Fr. José Cristo Rey García Paredes; and Jesuit Fr. Orlando Torres.

If every congregation of religious in the world participates, the panel will have to distill more than 2,000 responses into one document, preferably no more than 10 pages long, per Vatican guidelines.

Cimperman is the author of Religious Life for Our World: Creating Communities of Hope and is currently working on a book on reconciliation and peace-building as a call to consecrated life.

GSR: Your passion for the synod is undeniable. In fact, it's hard to hear you talk about the process and not feel some of that same passion.

Cimperman: It goes up against polarization. Normally, we're just in our own little worlds, and this is flying in the face of that, and you don't know where it's going to go, which means it's probably Spirit guiding it.

The whole synodal process is really communal discernment. How do we walk with each other and hear each other? And if we do it right, it may not be that dominant voice that stands out, it may be that quiet voice you hear and say, "There is truth in this." The whole impetus behind it is wonderful.

How do we invite and engage religious everywhere in this so it's not only the leaders, it's everyone in the church and even people not in the church?

You've talked about how vowed religious have a particular role to play in this not just through the responses, but by helping the process for laypeople.

Religious are being called to offer something — really, two things. Yes, fill out your response as religious, but also go out and participate in the parishes, our schools, wherever the conversations are happening, to listen and hear — because we're always trying to meet the unmet needs — and also to offer some of our ways, to show how we seek to listen through our own discernment processes.

We have some experience in communal discernment. It's the experience of listening, engaging, ways of being silent and listening, modes of prayer. Plus, we'll learn from other people. It's a space where we can offer what we are deeply about.

Will it matter? Is it really worth the bother when so many people say the church won't listen and nothing will change?

People are asking that question. I was on an international panel via Zoom, and a person said, "I get cynical. We've heard this before."

It is an act of hope. It's an act — not just a thought or feeling of hope, it's an action — and it's hope. That's important.

I also see this as a call of the Spirit. This is a cure for that polarization and all this division. Synodality is asking us to sit with one another and have a conversation and listen and do some sharing. If we don't do this, if we keep doing the same thing, what will happen? This is not doing the same thing. This is doing something different.

Also, I have confidence in the Spirit's movement among us. This is not top-down. It's not bottom-up. It's coming from everywhere. Everyone is asking and being asked to be involved in this. We don't know where it's going to lead, and that's exciting.

Some people say that after the big gathering in Rome in October 2023, then it comes back to the dioceses and eventually trickles down. I say no. The point is that conversations begin. So many different lights can start shining. It's about God's mission. Hope links us to one another. Hope connects us. The gathering in 2023 is not the end of it. It's just the end of Part 1.

Tell GSR about your synod preparations

Global Sisters Report would like to hear how you and/or your religious community are participating in listening sessions or otherwise preparing for the 2023 Synod of Bishops on synodality. Please tell us about it in this Google Form.

So in that sense, it doesn't matter if the bishops really listen or not. On the other hand, what if they do?

It's going to make people really nervous because everything is on the table except their grounding in Jesus, their grounding in God. It's really a question of, can we encounter one another, can we dialogue across our differences as people of faith? And what might we start, what can we create? What are we called to as a church? What are we invited to?

It is an act of hope. It's an act that says, "Hear and see and move with it." This is a moment to take some risks. If we don't try anything, we know where we are right now, and that's where we'll stay. And for religious, if we truly participate and truly listen, this is going to bring us ever more linked to the people of God.

Do you get the sense that people are responding, that they really are participating in this process?

I think they're getting so many people responding that they're trying to refigure out how to do this. To me, that's a great sign. There's a hunger, and we're going to lose people if we don't engage them. The possibilities here are immense.

There's energy in it. And we too as religious can offer spaces for these conversations, spaces for people on the margins whose voices don't get heard.

Is there some fear that what is said and heard may not be positive? There's no shortage of people with criticisms of the church.

When we listen to the stories, we will find wounds, and we will have to attend to those. People are fearful because we're going to find pain, the pain of being church in this time. People of color, as just one example, have so much pain we need to hear about.

But we're a tradition that believes in both Good Friday and also Easter Sunday. We can sit with the wounded heart of humanity, and healing may be one of the graces that come out of this time. When you look at the unmet needs and the cries all around, how might we live this out? How do we hear what the Spirit is inviting us to?

I think we're going to hear both pain and grace, but we don't know where the conversations will lead. 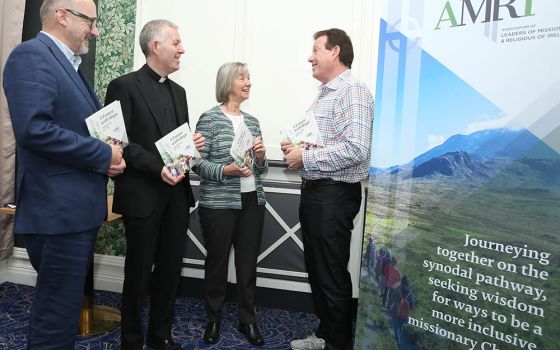 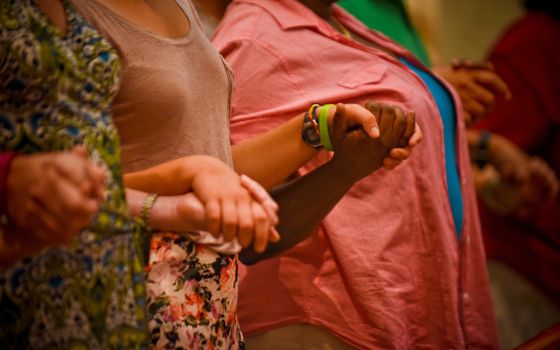 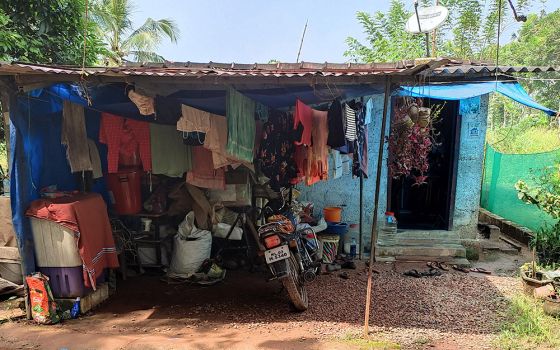 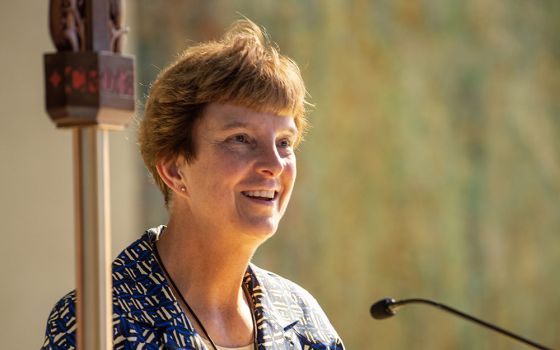