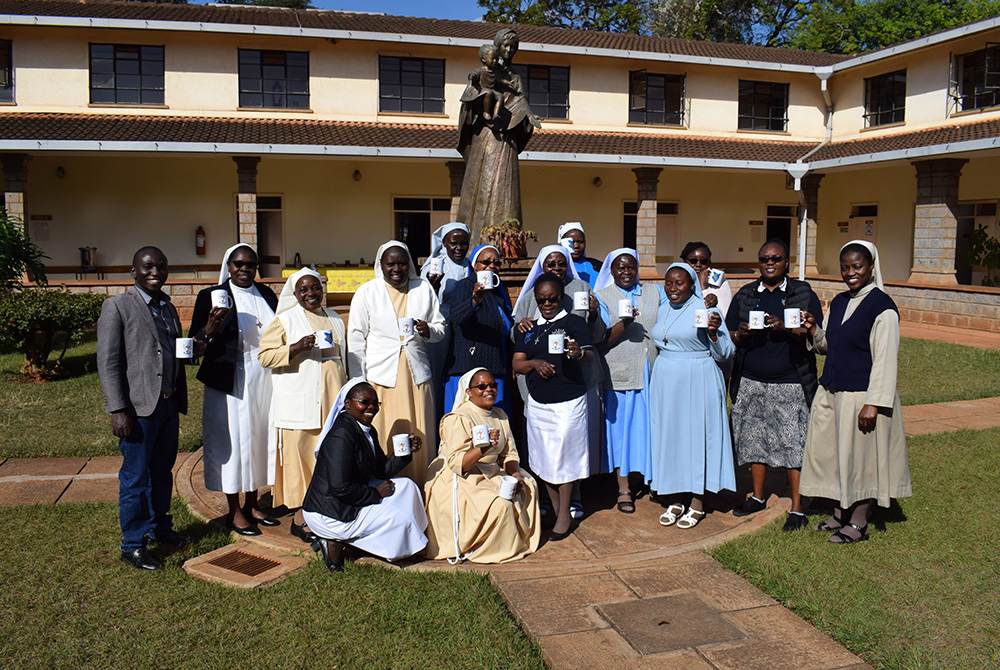 The planning committee for the Aug. 23-26 assembly for the Association of Consecrated Women of East and Central Africa, or ACWECA, pose for a photo ahead of the 2021 assembly. (Courtesy of ACWECA)

I recently participated in a miracle: the 18th assembly of the Association of Consecrated Women in Eastern and Central Africa, or ACWECA.

Why do I say "miracle"? This extraordinary association of women religious conferences from 10 countries with hundreds of different cultures and languages and a variety of national political systems has persisted in its purpose for nearly 50 years. The members represent 280 religious institutes of about 35,000 sisters with 41 general superiors.

It has taken women of determined prophetic courage, grit and faith to keep this association thriving in supporting sisters to live a vibrant religious life through programs of spiritual and human formation, education in leadership and religious life, and a forum for sharing the struggles that evolving organizations experience.

This was clearly expressed to me in an email from Sr. Prisca Matenga of the Daughters of the Redeemer, former chair of ACWECA and official assembly observer:

"Tribe, culture, language, limited resources was never a barrier, but rather, the spirit of the Lord was food for our quest of togetherness, hence ACWECA has grown from strength to strength. As women religious in the region, the Sisters are aware that 'Consecrated life is the very heart of the Church, a decisive element for her mission' and in coming together there is deep sharing of our very existence. There is sharing of joy, pain, and challenges we meet as religious, and empowering the Sisters."

I encountered the first iteration of ACWECA in Zambia when I worked as the secretary for the Zambia Association of Sisterhoods when that conference hosted an assembly for the association in 1981. It was then called the Sisters of East Africa Study Conference, initiated in 1974 by the regional conference of bishops, the Association of Member Episcopal Conferences in Eastern Africa. These bishops were founding new local congregations after the Second Vatican Council and saw the need for the young women entering, many with little academic education or knowledge about religious life, to learn together. 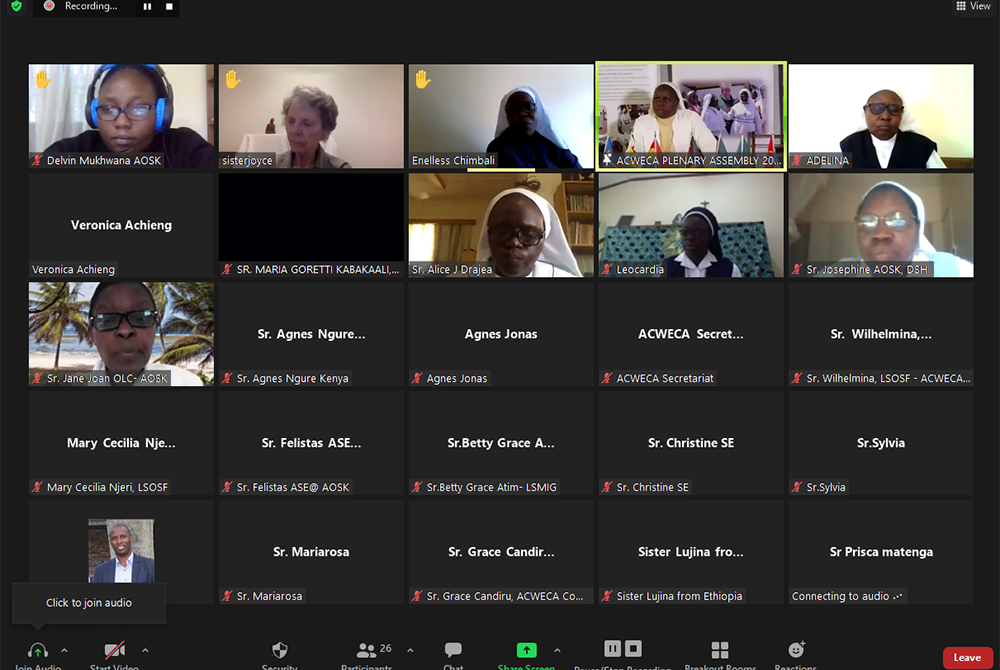 More than 175 women participated in the Aug. 23-26 assembly for the Association of Consecrated Women of East and Central Africa, or ACWECA (Courtesy of ACWECA)

"We did not have the internal capacities and skills" to manage this new life, and "we needed a united voice that could be heard as we raised our issues," said Sr. Agnes Wamuyu Ngure, a Franciscan Sister of St. Elizabeth, official ACWECA observer and former secretary for the Association of Sisterhoods of Kenya.

ACWECA is now the oldest enduring regional group of women religious on the African continent. It currently encompasses 10 countries: Kenya, Tanzania, Malawi, Uganda, Ethiopia, Zambia, Eritrea, Sudan and South Sudan (which was added after its independence in 2011), plus associate member Zimbabwe.

"The Sisters of member conferences design different action plans that address similar issues and from these ACWECA leadership formulates a comprehensive plan that is then shared by all," Sr. Eneless Chimbali of the Servants of the Blessed Virgin Mary, official assembly observer and past secretary for ACWECA, told me in an email. "The other unique thing of ACWECA is that [it] has a functional secretariat to implement the activities decided on. This unity becomes a source of power and force for the region for fundraising and addressing common challenges."

The enduring, active presence of ACWECA is itself a prophetic statement to the church and the world about the significance of women religious in Africa and their potential to be leaders of faith and human development. 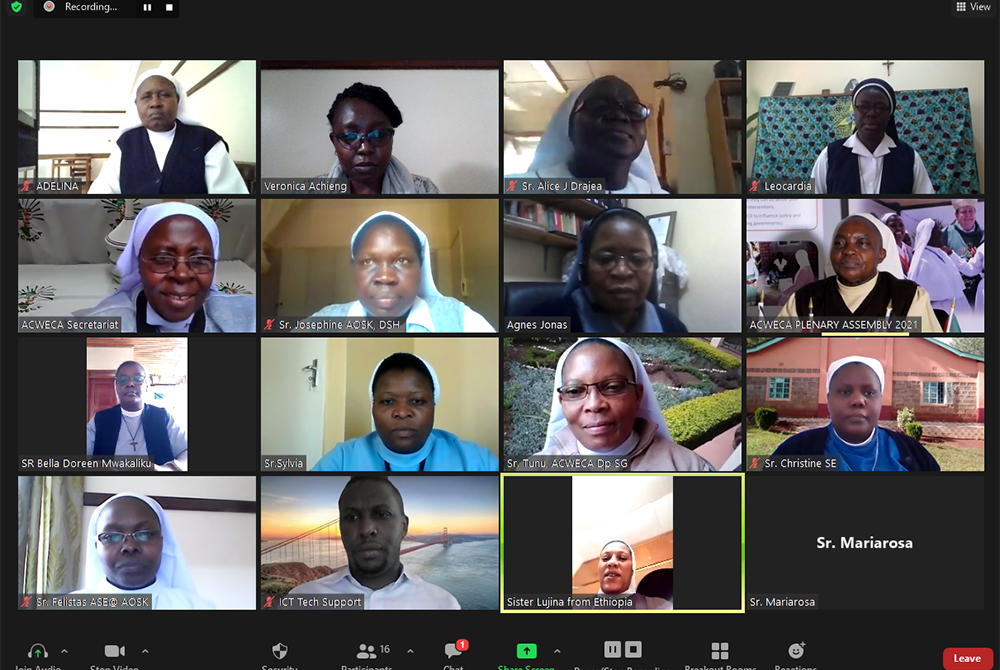 Board members of the Association of Consecrated Women of East and Central Africa, or ACWECA, discuss the Aug. 23-26 assembly. (Courtesy of ACWECA)

The theme of the Aug. 23-26 assembly — "Re-awaken the Prophetic Role: A Call for Reformation Towards Holistic Transformation in the ACWECA Region Today" — reflected the sisters' determination to continue this influence, even though it is not often recognized or fully engaged by either the church hierarchy or civic communities.

The assembly, postponed in 2020 because of COVID-19, was held virtually from its headquarters in Nairobi, Kenya. Even though COVID-19 prevented the desired in-person event, it was an exciting week for the 177 women who participated in their first attempt at such a gathering.

From my perspective, it went on without a glitch, a rarity in 10 countries where electricity and internet access are often unreliable.

Sr. Hellen Bandiho, a Sister of St. Therese of the Child Jesus and current secretary of ACWECA, agreed: "I was impressed by the attendance. Sisters were there until the last day. They persevered until the last hour. It showed me that the presentations and discussions touched them and they did not want to miss any of the sessions. It made me proud."

I was privileged to be part of this new experiment as one of four official observers along with Sisters Eneless, Prisca and Agnes. We met online and via WhatsApp for debriefing each day and gave a final report on our observations on the meeting's content and dynamics to the leadership following the assembly.

Governance and leadership, formation, ministry and sustainability are the usual topics and continue to be issues at the heart of agendas when the assembly is held every three years. These themes were present at this assembly, as well, within the context of prophetic witness. 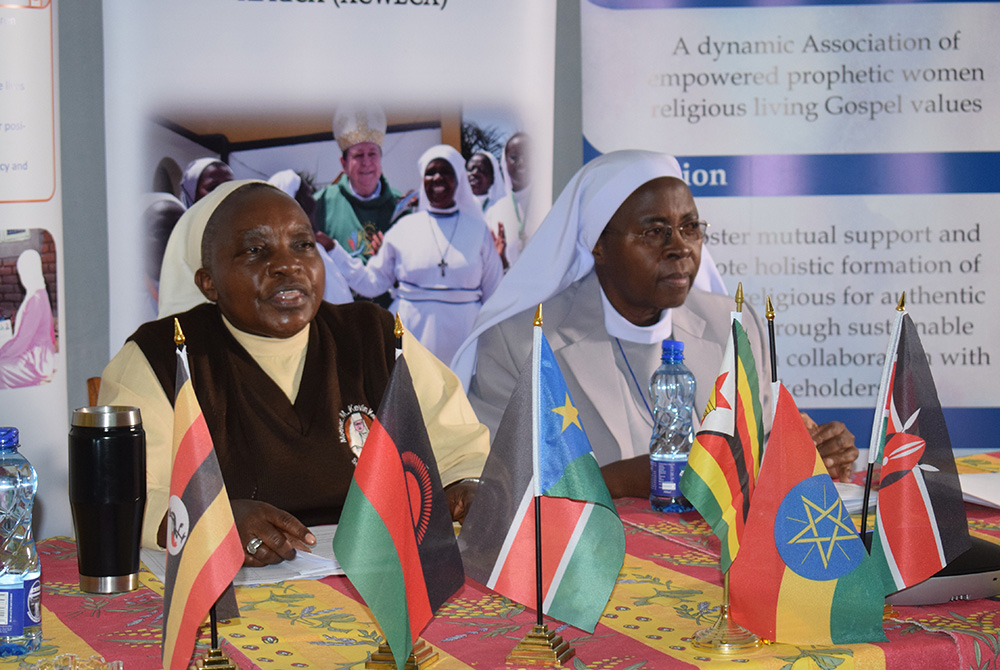 Sr. Cecilia Njeri, left, superior general of the Little Sisters of St. Francis and president of the Association of Consecrated Women of East and Central Africa (ACWECA), and Sr. Hellen Bandiho, a Sister of St. Therese of the Child Jesus and secretary of ACWECA, during the Aug. 23-26 ACWECA assembly (Courtesy of ACWECA)

Sr. Cecilia Njeri, superior general of the Little Sisters of St. Francis and ACWECA president, introduced the keynote speaker, Cardinal João Braz de Aviz, prefect of the Congregation for Institutes of Consecrated Life and Societies of Apostolic Life at the Vatican. His remarks included an unexpected challenge to the association.

Along with calling the sisters to be prophets of God's love and mercy in their ministries to God's people, Braz de Aviz asked them to "change the pyramid of power" of their organizations and open them to the fraternity described by Pope Francis in Fratelli Tutti.

He then told them of a request from the congregation for religious life: for ACWECA to change its membership to include male religious. Because the sisters have lived day in and day out in environments of at-times-overwhelming patriarchy in church and culture, such a shift after so many years of female culture and leadership would not be an easy one to make and, thus, raised many questions.

The rationale, according to Braz de Aviz, was that the change would allow ACWECA as a regional association to become an official member of the pan-African Confederation of Conferences of Major Superiors of Africa and Madagascar (COMSAM), a clerical structure that is in sync with the governance protocols of the Vatican congregation for religious life, which require both female and male members for regional recognition.

The explanation helped the sisters understand why ACWECA has never received Vatican recognition as an association, though it has applied for it three times. Because the ACWECA meeting was virtual, there could be no immediate discussion on Braz de Aviz's proposal, so the issue was tabled.

Three days later, Fr. Kipoy Pombo from the Democratic Republic of Congo, the current president of COMSAM, discussed the value ACWECA could bring to the organization. He noted that ACWECA is an extraordinary example of success in its ability to influence and provide many programs for evolving female religious life. He said he regrets that although the confederation of major superiors is a pan-African organization, it has not been able to find resources to exert a similar impact as ACWECA on religious life across Africa.

In reply to his comments, the sisters reiterated that having male members would be a dramatic change of character for the organization and would require much time and discernment, as male and female religious organizations often have different cultures. Sisters also expressed concern about what could happen to donors who have walked with them as faithful partners over many years as an organization focused on African women religious.

Part of the success of ACWECA has been planning and education, seeking resources to provide input relevant to current needs in the region. This year, presentations were given by Sr. Mary Gitau of the Institute of the Blessed Virgin Mary; Sr. Jacinta Auma Opondo of the Franciscan Sisters of St. Anna; and Sr. Bibiana Ngundo of the Little Sisters of St. Francis on the prophetic role of women religious in the context of COVID-19 and the importance of solid formation and discernment at all stages of religious life.

The concerned responses of two members were particularly poignant. One noted her anxiety of how trauma from war, cultural practices or poverty can greatly impact the discernment of young women desiring to enter religious life and wondered how such trauma needs to be addressed. A second shared the pain in a community in which older professed sisters have seemingly lost faith in their vocations and wondered how to assist them to return to their original commitment. I could see in the faces of other participants that these were common stories.

Sr. Carol Zinn, a Sister of St. Joseph who is executive director of the U.S. Leadership Conference of Women Religious, also emphasized to the assembly the need for ongoing discernment and formation throughout religious life. She also said that in these times of trauma and uncertainty, we cannot stand alone individually or as institutes. We need one another nationally and globally.

One of my favorite sessions at ACWECA meetings is when country reports are given. Listening to reports on the evolution of religious life is exciting and inspiring. However, what touched me most at this gathering were the experiences of how COVID-19 impacted the conference members' congregations.

I learned about the pain of depression many sisters faced with the loss of members, family ministries, and income. Yet I also heard of creative ways sisters coped with the isolation. For example, the Tanzania Catholic Association of Sisters started a WhatsApp support group for its members.

As the meeting ended, I was again struck with the resource ACWECA is to religious life and human development in East and Central Africa and imagined the power they could exert for development if they were more public about their activities. I thought especially of their leadership in early childhood development and child-protection initiatives; the work in international anti-trafficking efforts and agriculture; and their many programs for youth and families.

I think they have yet to realize the full potential of their organization for their regions of Africa and beyond, even in the midst of their many challenges. I can only believe that recognition of their power will come through their perseverance, farsightedness, determination and faith.