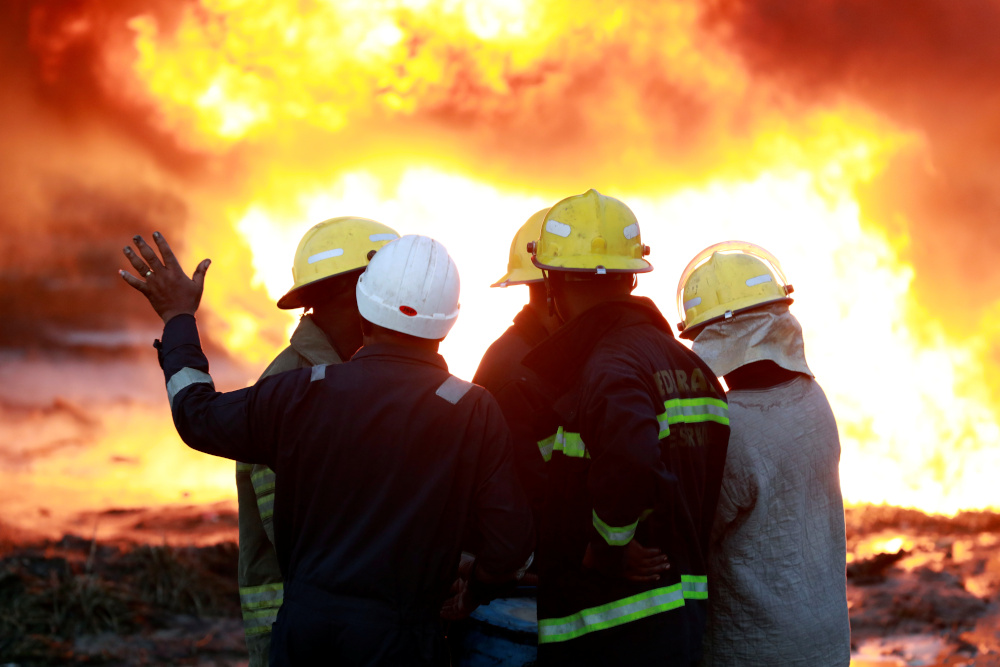 Firefighters in Lagos, Nigeria, deliberate on how to put out a pipeline explosion March 15, 2020. Archbishop Adewale Martins confirmed March 16 that a nun and a female security guard died while rescuing students from a chapel that had caught fire. (CNS/Reuters/Temilade Adelaja)

The principal of a Catholic girls' school was among 15 people killed in the impact of an explosion at a gas processing plant in Lagos, Nigeria's commercial capital.

Sr. Henrietta Alokha, a Sister of the Sacred Heart of Jesus, and a woman who worked as a security guard were rescuing students from a chapel that had caught fire and "died in the process of ensuring that the students were safe," Archbishop Alfred Adewale Martins of Lagos said in a March 16 statement. He did not release the name of the security guard.

The roof of the chapel at Bethlehem Girls' College in the Lagos suburb of Abule Ado caved in and fell on the two women, the statement said.

The March 15 explosion destroyed about 50 buildings after a fire broke out in Abule Ado. Nigeria's state-owned oil company said the explosion was triggered after a truck hit some gas cylinders stacked in a gas processing plant near a pipeline.

The "devastating explosion, which very badly affected our Bethlehem Girls' College … occurred while the students and staff were at Sunday Mass," the archbishop said.

The priest who was celebrating the Mass helped in rescuing the students and is safe, the statement said. All of the students were taken to safety, and those who were injured were hospitalized, it said.

The school's staff quarters, administrative building, refectory and hostel buildings were razed to the ground in the fire.

"No essential building is standing except the convent housing the nuns in charge of the school," the archbishop said.

The archdiocese is making plans for the students to be accommodated in its other schools to ensure their education is not disrupted, he said.

Noting that official investigations into the explosion are yet to be done, the archbishop said, "All we know is that a truck accident was involved, the pipeline going through the community was involved, as well as a stack of gas cylinders."