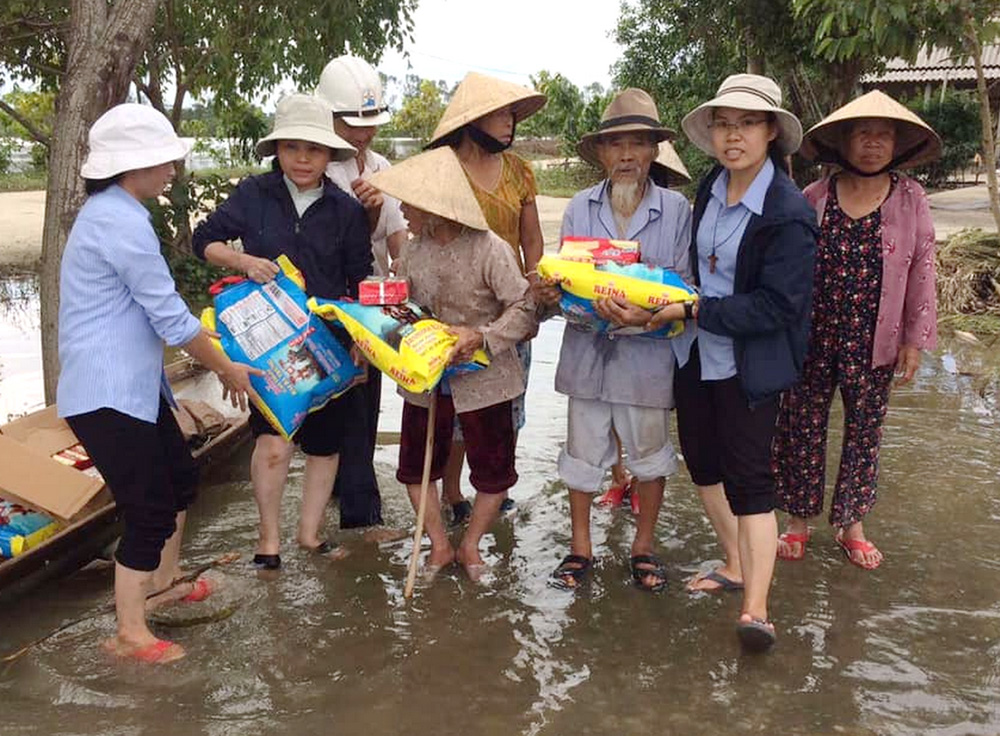 Every day, Lucia Nguyen Thi Tam Nguyen helps workers build her new house to replace the one that collapsed during Storm Son Ca in mid-October.

Nguyen — from the Phu Vang district of Thua Thien Hue province in central Vietnam — is temporarily staying at a relative's, along with her three children and grandchild.

The 47-year-old woman, who works at a day-care center run by Filles de Marie Immaculée (Daughters of Mary of the Immaculate Conception) nuns, said the sisters raised 45 million dong (US$1,800) to build the 40-square-meter house.

"We owe the nuns and benefactors a deep debt of gratitude for providing us with the financial support to build the house that we could not afford," said Nguyen, whose husband died at sea while fishing in 2015. She had bought the first house in 2007 but had no money to repair it.

"We are dancing in the streets to celebrate the coming Christmas in our dream house," she said. 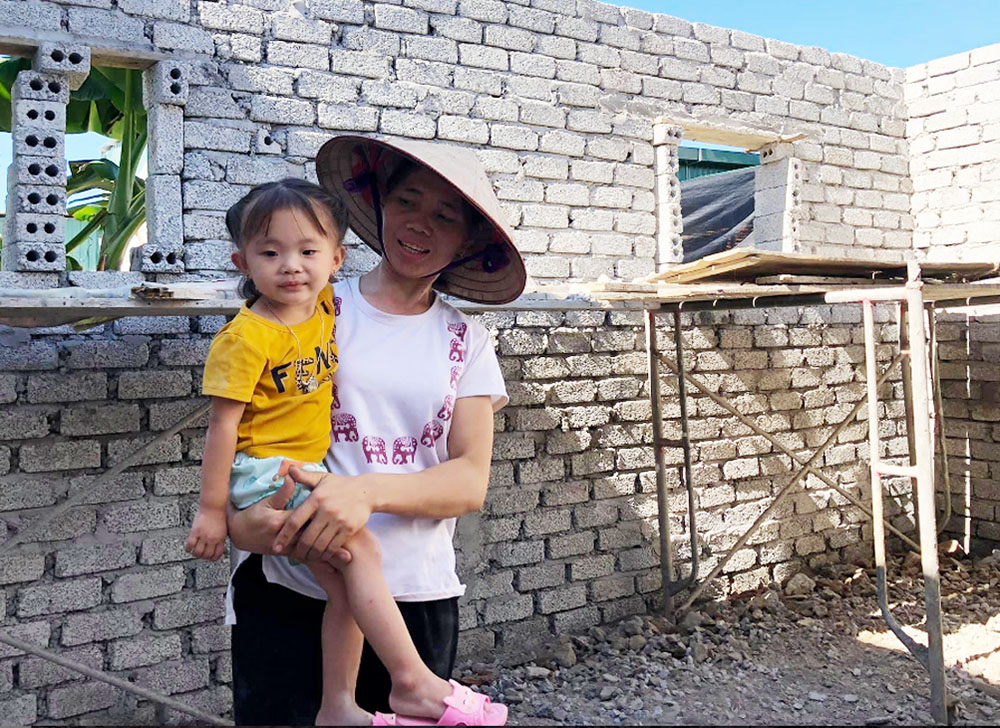 Nguyen and her family were not alone in losing their home in the historic storm and floods, nor in receiving financial aid from sisters: The Noru and Son Ca storms (the fourth and fifth storms, respectively, to hit Vietnam this year) struck seven central provinces in late September and mid-October, with landslides and floods devastating the region.

On Oct. 20, Thua Thien Hue province alone reported that the floods inundated more than 60,000 houses in up to 3 meters of water. Two people have died, and several were injured.

To replace what was lost, as well as provide for those left with nothing, the north-central province reportedly needs 100 tons of rice and 10 tons of corn for local people to grow, and 300 billion dong (US$12.5 million) to deal with the coastal erosion measuring roughly 6 kilometers. Residents are also being relocated from areas with high risk of landslides and flash floods. 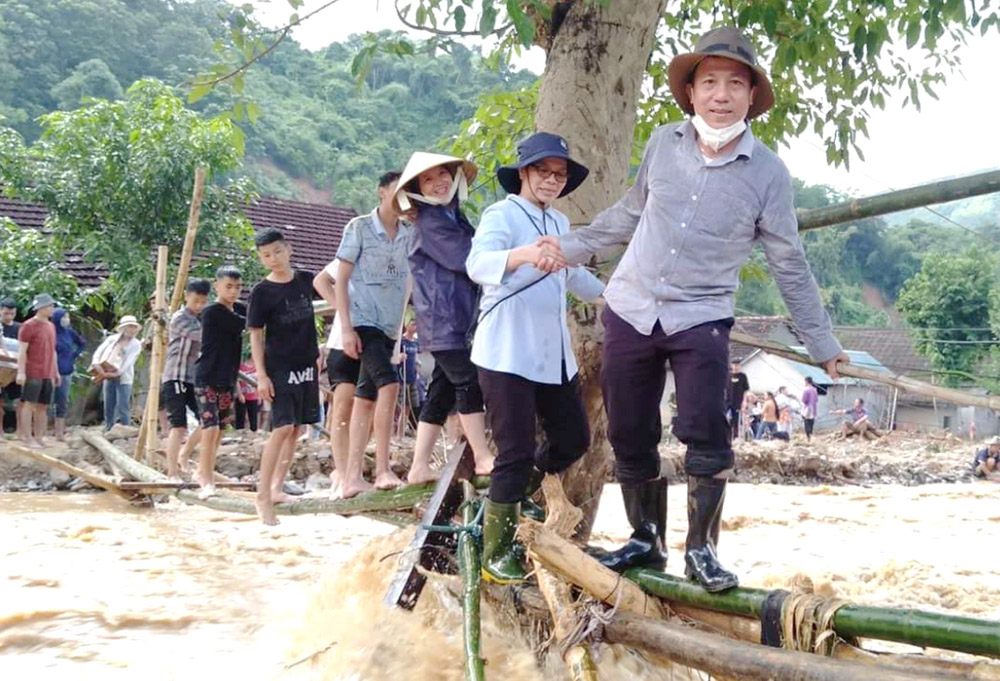 Sisters from Lovers of the Holy Cross of Vinh, St. Paul de Chartres, Daughters of Our Lady of the Visitation, and Missionaries of Charity Institute told GSR that they have come to the aid of hundreds of survivors in remote areas in provinces of Ha Tinh, Nghe An, Quang Nam and Quang Tri in recent weeks.

They said many people had to stay in huts or under the open sky after flash floods destroyed their houses.

Le Thi Mung from Mai Duong village said the Noru storm damaged her house and furniture, killed her two sows and destroyed 300 kilograms of rice. The homes of 16 families in the village had their roofs blown off.

The 63-year-old mother of three said the Daughters of Our Lady of the Visitation visited her village and gave 24 families (including hers) humanitarian aid and money to repair their houses. 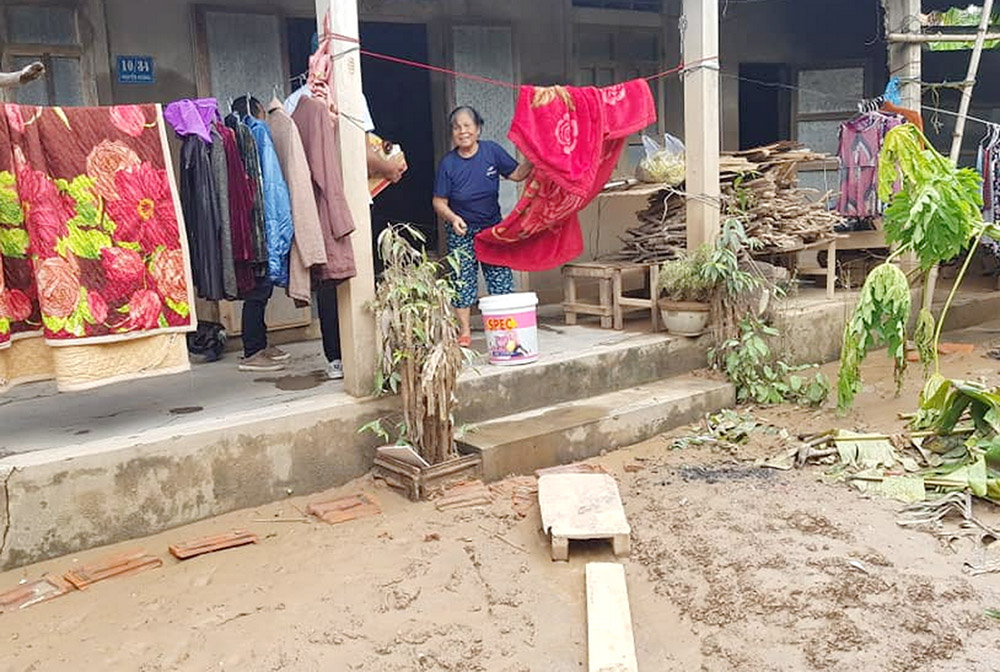 "We would not know how to overcome the disaster without their material and emotional support," Mung said, who received 15 million dong to repair her house and buy cattle and seeds. "They came to our aid soon after the storm," as well as helping followers of other faiths.

Thaddeus Le Van Cam, from the Quang Dien district of Thua Thien Hue province, said that flash floods washed away his 200 ducks and a boat. He sustained a loss of 25 million dong (US$1,000) for the ducks.

"We were offered 30 million dong by some benefactors; that is a handsome sum we did not dare dream about in this hard time," the 46-year-old father of two said, adding that Daughters of Our Lady of the Visitation nuns called on benefactors to support his family.

Cam, who now works at construction sites for a living, said he will use the money to buy basic food and a new boat for his family, as well as 150 ducks to raise next month.

"The nuns and benefactors came to our aid in time, so we feel peace and will return to normal life soon after the floods," he said, adding that local authorities have given him just 100,000 dong (US$4), 10 kilograms and two packages of instant noodles so far.

Daughters of Our Lady of the Visitation Sr. Agnes Le Thi Thanh — from Kim Doi community based in Thua Thien Hue province — said that their clothes, furniture and motorbikes were in floodwater while a power outage hit their area. 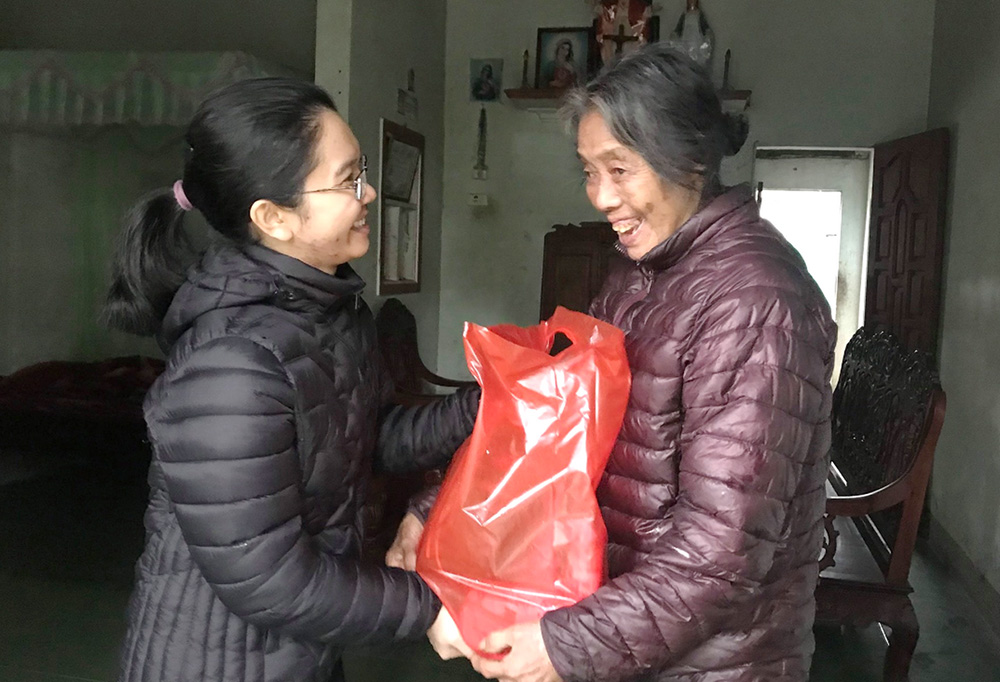 Thanh said that after the floods, six nuns offered instant noodles and clothes to 200 affected households in Huong Phong commune.

"We plan to provide medical checkups for local people who will suffer from diarrhea, dengue fever and gynecological diseases caused by floodwater," she said.

Lovers of the Holy Cross of Hue Sr. Anna Nguyen Thi Linh said that local people appealed for humanitarian aid, as they still suffer from severe lack of food, clothes and medicine in the aftermath of the disasters. 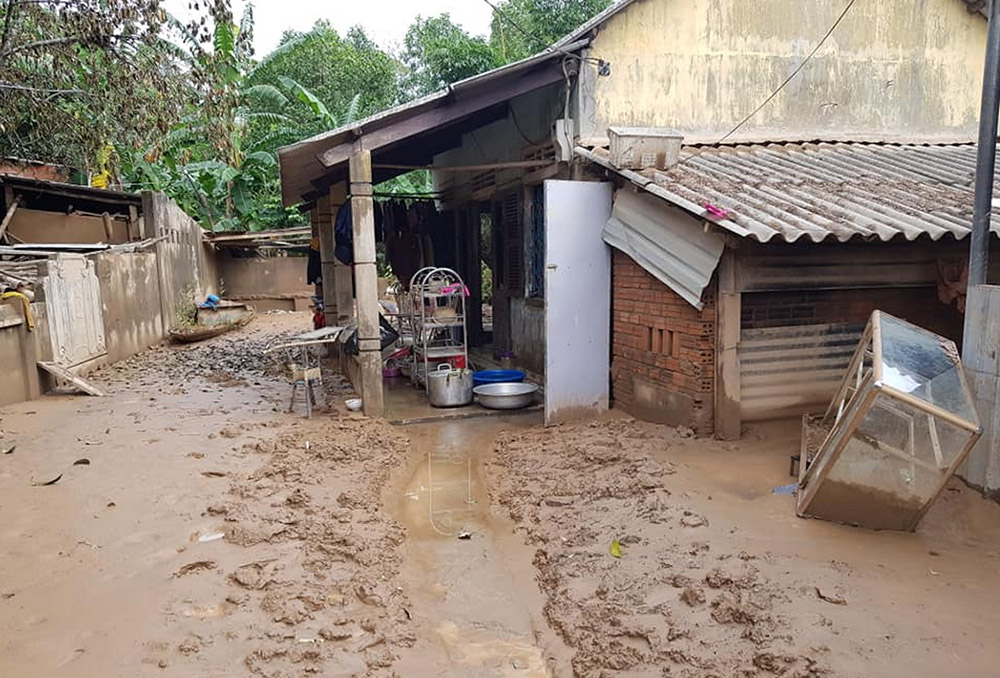 St. Paul de Chartres Sr. Lucia Nguyen Thi Loan said that some nuns visited 280 Co Tu ethnic families from Da Nang's Hoa Vang district on Oct. 21 and 27. The victims there suffer from lack of clean water and food, as the floods wiped out their cattle, poultry, corn and rice, also leaving their houses covered in mud and garbage.

Loan said they provided families with dry foods, bottled water, clothes and electric lamps as emergency aid. "We are calling for donations from benefactors to give [Co Tu] ethnic victims free health care and school supplies in the future."

She said the nuns also offered money and accommodation to those who worked hard to search for their relatives' graves that had been washed away or buried by landslides, as the landslides and floods damaged or destroyed 610 graves at the public cemetery of Hoa Son in Da Nang. 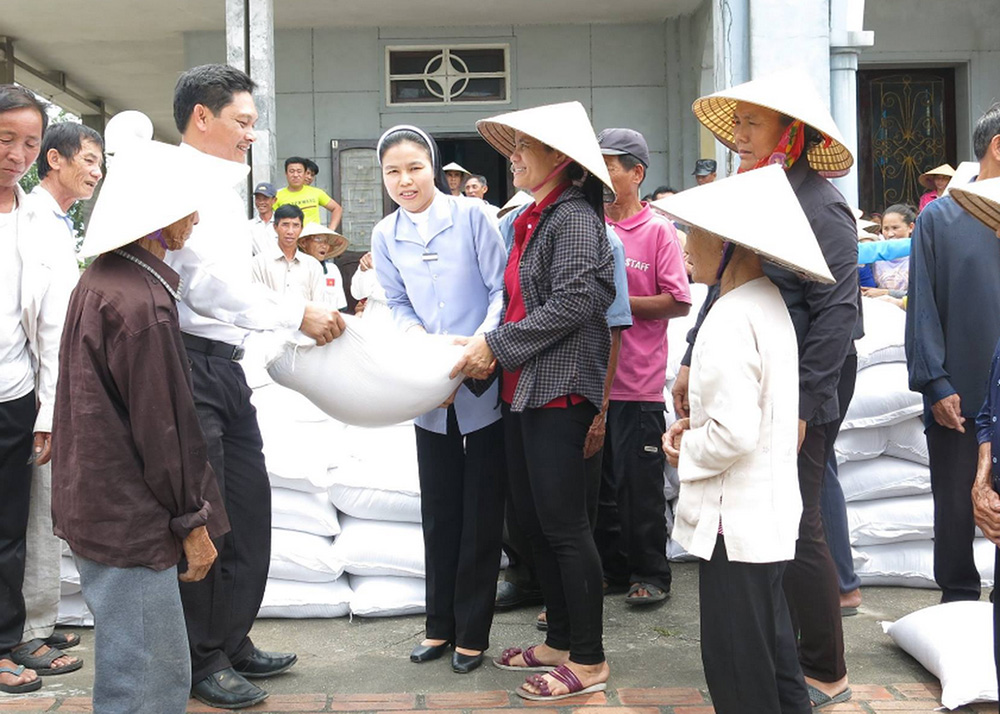 Meanwhile, Missionaries of Charity Institute Sr. Mary Le Thi Lien from Ha Tinh province said the nuns used their funds for natural disasters to make sticky rice cake and buy 120 packages of instant noodles and 2,500 kilograms of rice, gifting the provisions to more than 100 households throughout the Huong Khe district.

The 37-year-old nun said they try to collect information on losses and damages in order to request support from Caritas in the Ha Tinh Diocese.

"Local followers of other faiths say that they are deeply moved to see us: the first people to wade through mud and flood waters to go to their aid when rain wreaks havoc in their area every year."