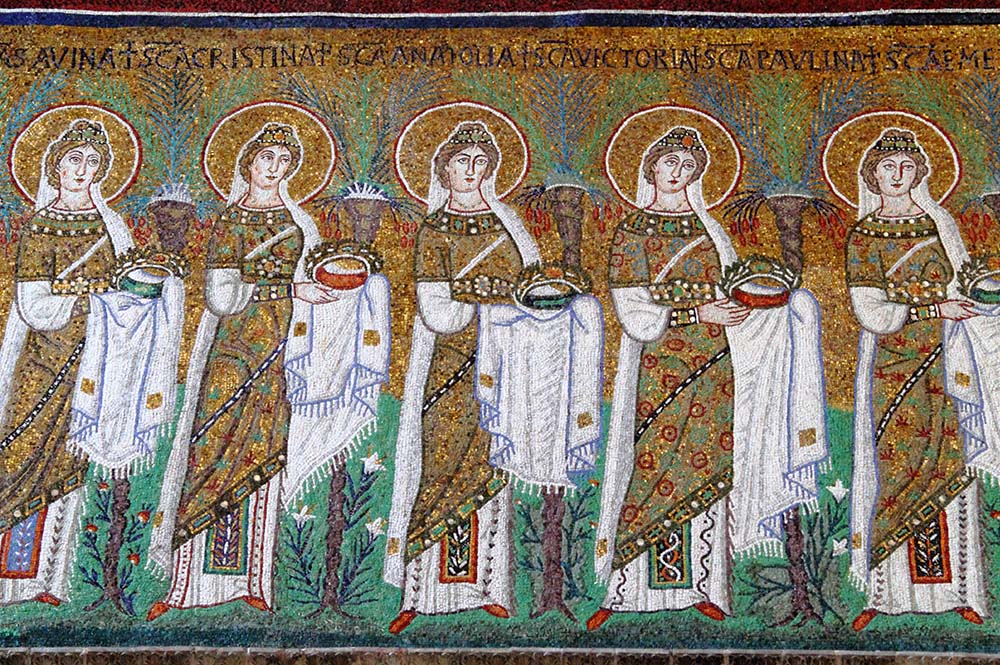 A sixth-century mosaic in the Basilica of Sant'Apollinare Nuovo in Ravenna, Italy, shows a procession of virgin martyrs. (Wikimedia Commons/Rabe!)

Editor's note: This column is part one of a two-part series on Jesus as a feminist. Read Part 1.

In a previous column, I reflected on the early church as a feminist movement. Jesus and his teaching held special attraction for the poor, oppressed, marginalized and excluded from various sections of society. Since he challenged patriarchy, most converts were women, and they contributed to the phenomenal growth of Christianity (Luke 8:1-3; Matthew 27:55; Acts 1:14).

However, when oral traditions were put in writing to form the New Testament, male writers became prominent. The decision regarding what constitutes revelation became the monopoly of male disciples. But how does this happen in the varied cultural contexts of churches in different parts of the world? Is patriarchy so powerful that it is allowed to take over the feminist thrust intended by Jesus Christ?

This implies that the stories of women in Christianity need to be written or rewritten today. Christian feminist scholars have been using the hermeneutics of suspicion for research. While we use several feminist biblical hermeneutical (interpretative) methods, most of them have a deconstruction-reconstruction approach. This means that patriarchal interpretations of scriptural texts are unraveled and reinterpreted with a feminist lens.

These methodologies raise questions about whether the contents of the Bible have been altered, or the patriarchal church has been wrong in interpreting it. They help in "depatriarchalizing" the text and reconstructing their meaning.

Let me offer my own examples of theologizing in this manner.

God is not satisfied after creating Adam and decides that humanity can reach its full identity and best represent God's image only after the creation of Eve (Genesis 1-2). According to the plan, the role of woman is essential for continuing the human race. God loves Eve so much that all humanity is said to be feminine in relationship with God. Woman becomes a sacrament of this covenant. God is feminist.

The Incarnation is a response to the cries of oppressed people, and Mary is chosen for this purpose (Luke 1:26-38). The plan of God is to reconcile all things in Christ. In Jesus Christ, we don't find a masculine "left brain" or a feminine "right brain" but a "whole brain" approach. In him there is the fullness of the revelation of God's fatherly and motherly love for humanity, who is God's beloved daughter.

I see the Last Supper as intended to signal the reversal and end of patriarchal structures because Jesus is feminist. How can this be when it seems to have resulted in exclusivist attitudes toward women leaders in some areas of the church?

Let me elaborate: The Eucharist is the re-presentation of the paschal mystery, which reminds us of Jesus' servant leadership (Philippians 2:6-11). Normally, women or slaves are expected to wash the feet of the men who are invited. However, Jesus reverses the roles and manifests the so-called "feminine" dimension of humility and service by performing this ritual. He expects the male apostles to imitate this gesture (Jn 13:4-17), obviously, by washing the feet of the women who are most probably the only other individuals present in the upper room.

He shows that men can also integrate these qualities in themselves. Women are excluded from the ritual because they do not need to be "taught" about these qualities. In that culture, they are already oppressed and treated as subalterns and servants by men.

Thereafter, at the foot of the cross stand the three Marys (John 19:25). On the cross, Jesus gives birth to the church as his side is pierced, and blood and water flow out (John 19:34). He is an image of the suffering during childbirth and humiliation that mothers go through in that patriarchal society. He takes the place of humanity (God's daughter) on the cross. 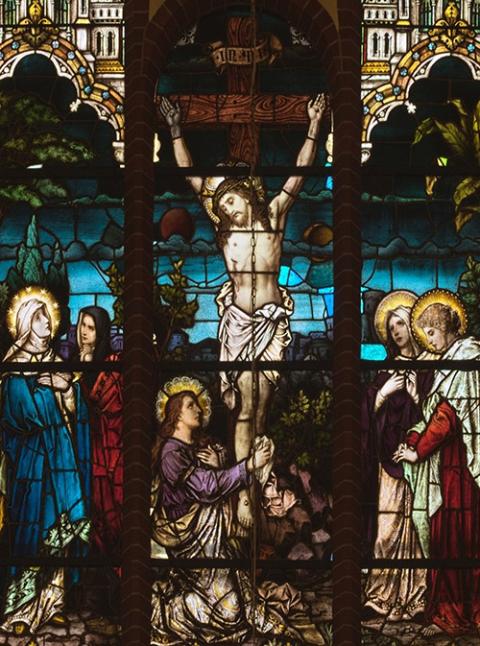 He highlights the leading role of his mother Mary, the new woman, the first disciple, the representative of all humanity (daughter Zion), to John (John 19:26-27) and the church — thereby commissioning it to be a feminist movement. In this way, he liberates woman/humanity. "It is finished" (John 19:30).

This reversal of traditional roles during the Last Supper and the crucifixion of Jesus has a parallel. The Resurrection is a new beginning for God's beloved daughter, who represents all humanity.

Mary Magdalene is the first witness and an Apostle to the Apostles. Why does Jesus choose a woman for this purpose? He wants to give an example to the world about how women also can integrate the so-called "masculine" qualities in themselves, by being called to witness.

Why are the women at the Resurrection asked to go to the disciples (Matthew 28:10; John 20:17)? Having abolished the discrimination against women because of the patriarchal system and reconciled all humanity with God, the risen Lord wants a church where women and men witness to this message and work together in an "I-Thou" relationship for the sake of the kin-dom.

However, in the early church, since there are fewer women compared to men in the Greco-Roman society, Christian women face enormous pressures to get married to pagans and bear children, but they choose to remain virgins and are even killed for their decision. The movement of virgin martyrs emerges as a feminist countercultural force in the early church. By being called to virginity for the sake of the kingdom of heaven, they transcend gender differences, becoming images of the whole church's love for Christ. Thus, women represent both men and women in their relationship with God.

Humility is accepting the truth (Luke 1:46-55) of God's gifts and purpose given to men and women alike, which God found "very good" at Creation (Genesis 1:26-31). These examples support the idea that Christianity is a feminist movement, and Jesus is a feminist par excellence.

We draw our life-sap through the roots of our faith in Jesus Christ. Will the church realize its beginnings with greater understanding and become a protagonist and witness of women's liberation?

Women must be encouraged to write and rewrite herstory. The feminist thrust of the ancient order of virgins, order of widows, and order of deacons needs to be revived in all forms of consecrated life today.

Read this next: Scripture shows how the early church was a feminist movement