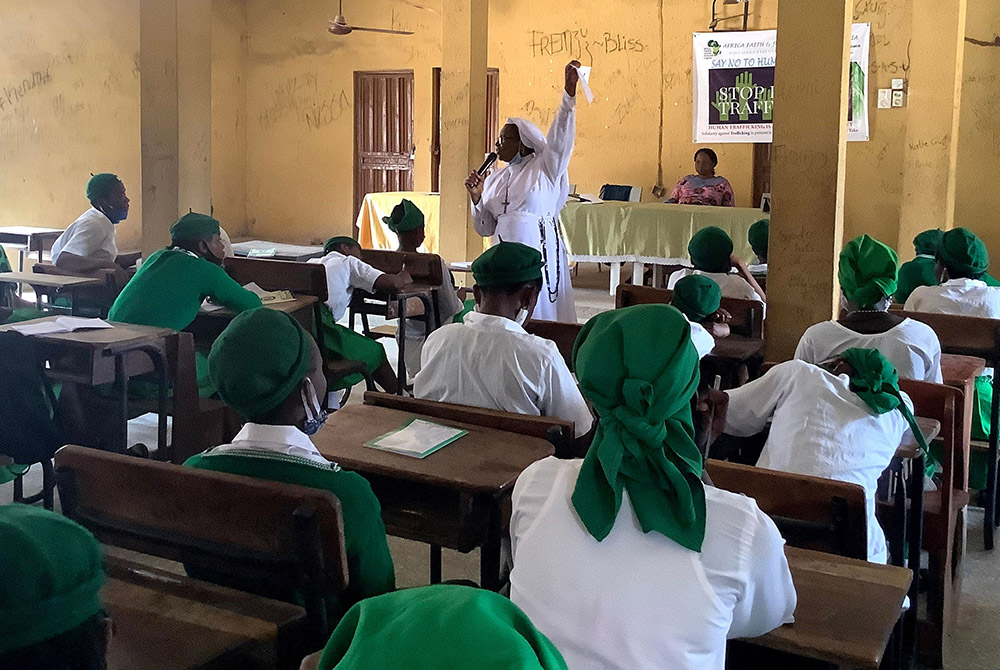 Editor's note: The United Nations World Day Against Trafficking in Persons is being held July 30.

As we, the Africa Faith and Justice Network-Nigeria walked into Government Girls Science Secondary School of Kuje, Abuja, in Nigeria, I felt we were at the right place to speak with a vulnerable group of young girls who might be future victims of human trafficking. I was happy that we were going to share with younger children information about the dangers of human trafficking. The school administration was also pleased to welcome us to speak with the students on how to avoid being trafficked, and to teach them to speak out when they notice unusual behaviors. There were about 200 girls, from grades 7-12.

They were very attentive and active during the program. The students were eager to know more and share with their friends about what they learned about human trafficking and the tricks perpetrators use to lure their victims. Anyone can be a victim and/or an agent for perpetrators. This was highlighted in a short drama that I guided them to act. The drama shows that there are chains of traffickers linked together, waiting for an available opportunity to strike.

In order to educate and inform their consciences, I asked the students if they understood the core message of the drama and the ideas it was trying to get across. Their answers were affirmative and that gave me joy. In fact, understanding the message I tried to get across with the help of a short drama means that this group of students will be able to elude the tricks of traffickers. 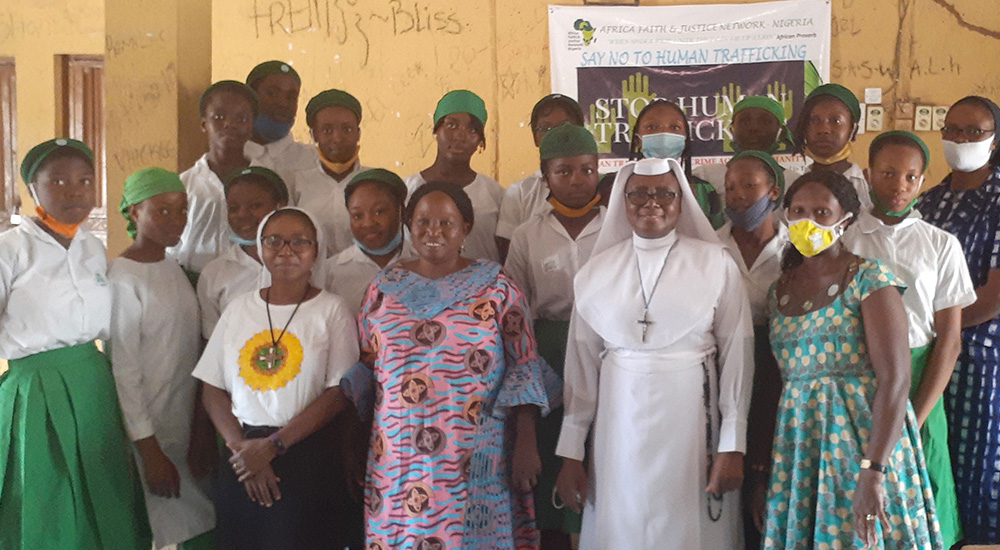 Sr. Mary Rosanna Emenusiobi with some of the students in the Government Girls Science Secondary School (Courtesy of Teresa Anyabuike)

The girls were shocked to learn about online trafficking. They were in dismay and expressed it, looking at each other when one of the speakers, Sr. Mary Rosanna Emenusiobi, an Immaculate Heart of Mary sister, shared with them how one can be trafficked online. Traffickers come across as harmless friends on social media, requesting friendship and showing potential victims enticing things that could lure them into believing they are really what they pretend to be.

Traffickers make conscious efforts to buy the trust of their victims before they strike. They make sure that the victims don't have any doubt about them; traffickers would go to any extent to prevent anyone that might help the victims to see otherwise. The students were advised not to be quick to accept "friend requests" on social media of persons they don’t know, and to avoid flashy offers from potential "friends" or strangers.

Human trafficking is a crime against humanity. It is dehumanizing. A lot of people are forced into sex, hard drugs, hard labor, and are even beaten to death. Trafficked persons are also sold so that their organs can be harvested and sold.

Sr. Mary Rosanna also shared with the students how some victims have been trafficked online after having been lured with enticing job offers and parties. After traffickers build trust with their potential victims, they invite them for an outing to carry out their devilish plan. She urged the girls to be vigilant, intelligent and smart, and to speak out when they began to notice something unusual about a friend or classmate. This was to remind the students that they are their brothers' and sisters' keepers in the fight against human trafficking. She also told the students that 99% of girls trafficked are sexually abused and used for sex labor and other dehumanizing ventures.

I shared with the students some experiences that I had. On different occasions I got a phone call and a text message. The phone call was to tell me to come and collect a parcel someone sent me. I was quite sure that no one sent me any parcel. So, I told the caller to desist from evil tricks to lure people to his den! It was obvious to me that the caller had something up his sleeve. The text message was about getting a well-paid job, and gave me a number to contact. I ignored the message. I still had the message on my phone, and I read it to the students. They were surprised.

Some of the students said that they will share what they have learned with their friends and loved ones. They were so happy to be part of the program. They promised that they will work in their existing groups in the school to report any issues bordering on sexual misconduct to the school authorities. They also said that they will make conscious efforts to speak out and let their parents and guardians know what is happening to them. And they said they will be wise in the use of social media.

One thing you ought to know, I told them, is that anyone can be a victim. Nobody is too big or too small to be trafficked. Everyone is a potential victim. The keyword is vigilance. I was overjoyed with the responses of the students, and to see their action plan. It was very satisfying to have reached out to share information with our younger sisters, who could be victims of human trafficking at any time.