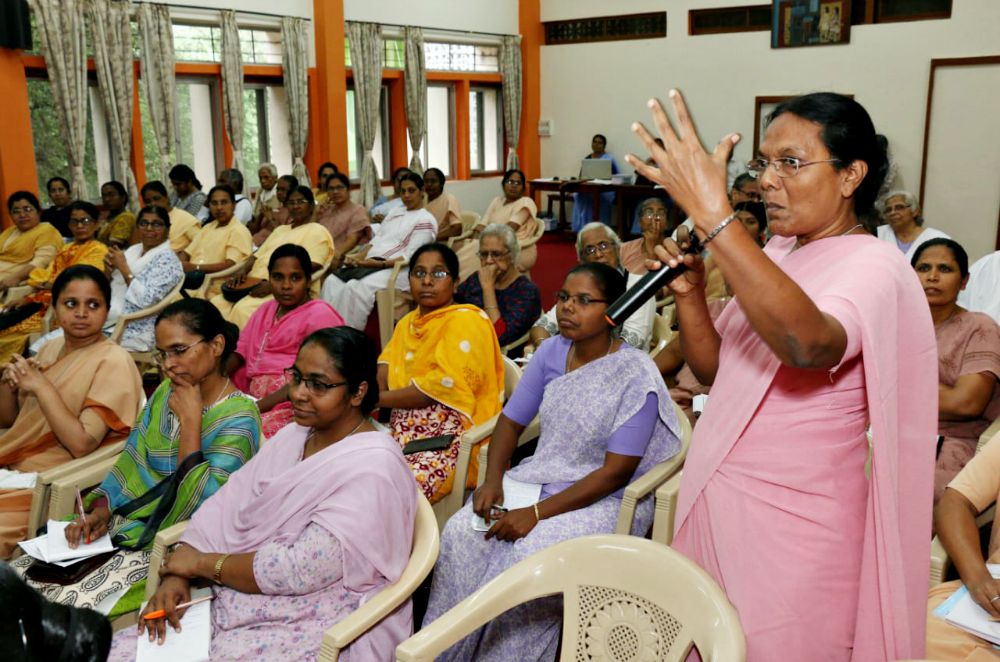 Sr. Fatima Kanickar, vice provincial of the Sisters of St. Joseph of Lyon, clarifies a point at the October national consultation on "Women in the Church: Reading the Signs of the Time" at Ishvani Kendra, Pune, western India. (Saji Thomas)

About 100 Catholic women religious in India have called for a place at the table in church leadership and asked that canon law be amended to make it more relevant and inclusive. They stressed these and other points at a "Women in the Church" consultation here in early October.

Women make up 50% of the Catholic population in the world but they are excluded from all decision-making bodies in the church, leaving them without a voice and at the mercy of male leaders, consultation participants agreed in a statement they drafted and approved in a voice vote.

"This practice should change and women should get their due place in the Catholic Church leadership," asserted 95 nuns from more than 30 religious congregations who attended the Oct. 4-6 consultation in Pune, a western Indian city. A few priests served as resources and part of the organizing team for the event.

Holy Spirit Sr. Jaisa Antony, one of the organizers, says the church in this century will lose Catholic lay and religious women unless something is done soon to address their role in the church.

"Until now, the church leaders have been silent on this vital issue. We have to break their silence somehow," Antony told GSR.

At "Women in the Church: Reading the Signs of the Time," participants debated how to bring equality close to home. Sessions included steps for negotiating a partnership in the church, redefining their work as service rather than servitude, dealing with clericalism, power and domination in the church, and an update on the status of the Indian church's gender policy nine years after its publication. 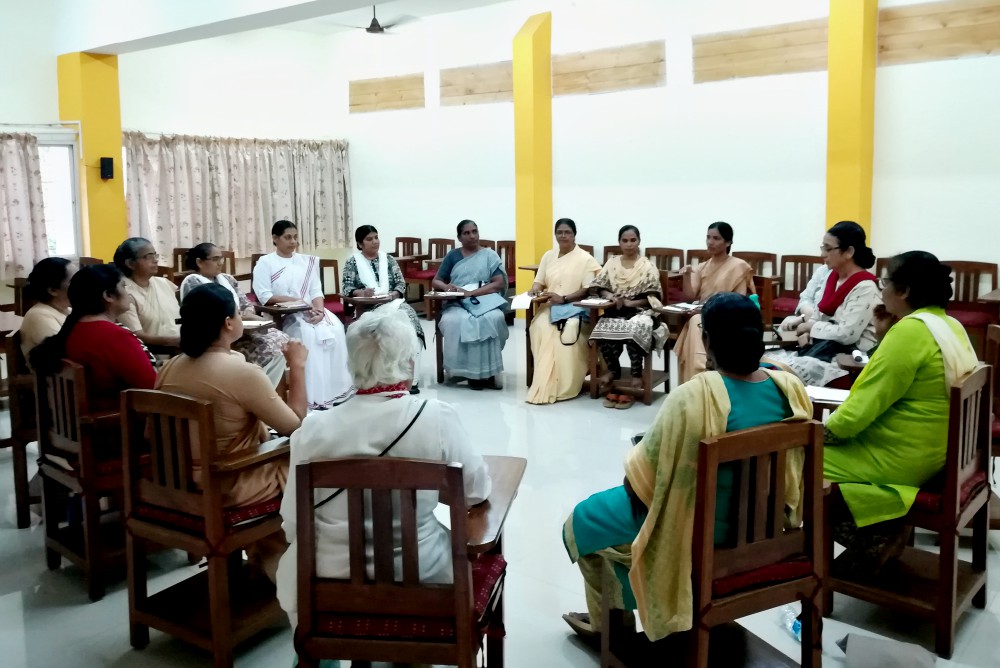 Catholic women religious discuss issues affecting them in a group session at the national consultation on "Women in the Church: Reading the Signs of the Time" at Ishvani Kendra, Pune, western India. (Saji Thomas)

Holy Spirit Sr. Julie George, a human rights lawyer and an event organizer, said the consultation was called mainly because the Indian church has done very little to implement the 2010 policy.

The meeting also addressed scandals in the Indian church, such as the alleged rape of a nun by Bishop Franco Mulakkal of Jalandhar, and how to seek empowerment of women from within. Topics included calls for accountability and holiness for consecrated men and clergy in the country, and for women religious to live the Gospel focused on spirituality, while facing the challenges of religious formation.

"Clericalism is a cancer that breeds on power games of domination and exploitation affecting priestly life and ministry, and its destructive impact seriously disturbs parish life and church ministries of women religious and the laity," the statement reads.

The statement was read aloud later in the three-day meeting and was approved on a voice vote. There is no timetable for next steps, but they plan to deliver the document to superiors, congregations and bishops in India.

The participants said in the statement that the consultation helped them embark on "a journey to challenge ourselves to bring about transformation in ourselves and in the church in keeping with the vision of Christ."

They have resolved to restore equality in the church and create a consciousness to negotiate partnership in the church.

The meeting also stressed developing "feminist consciousness" to read the signs of the time, critically evaluate current structures, values and practices and build solidarity across gender, class, caste and other divides to help transform lives.

The women religious noted that caste and class along with "toxic masculinity and femininity affect the church consciously and unconsciously."

Patriarchy, the basic organizing principle of society, thrives by dividing men and women, giving power and status to the males and leaving caring and nurturing to females, the statement notes.

It further says that women religious, who form a large percentage of the church's workforce, are programmed to conform to a patriarchal system and meekly comply with its demands on them.

"We realize that the liberating vow of obedience to God has to be reclaimed. We need to challenge and resist stereotypes and binaries that keep women in positions of subservience and enslavement," the statement asserts. Women religious often work in dioceses as unpaid or underpaid cleaners, decorators, cooks and housekeepers.

Listing manifestations of clericalism in the church, the nuns cited misuse of the pulpit, denial of sacraments by priests, degrading sisters and laypersons in public, imposition of biased practices, such as requiring women to cover the head, and disrespectful speech.

Theologian Sr. Pauline Chakkalakkal says the patriarchal and discriminatory canon law has successfully kept women out of all church bodies.

"Now the time has come to undo this historical injustice," the Daughters of St. Paul nun asserted while talking to GSR on the sidelines of the conference.

Treating women as lesser humans has no justification since they, like men, are created in the image of God, she said, adding, "Allowing only ordained men to hold positions of power in the Catholic Church is unjust."

Sr. Anjana Parmar, a Dominican Missionary Sister of the Rosary, finds patriarchy not only in canon law but in the Bible, liturgy, prayer books, hymns and other forms of worship.

She says since prayer books, hymns and other church materials do not use gender-neutral language, women are forced to recite prayers written in the masculine form, even where the female identity should be asserted.

"Hindi, India's national language, specifies gender difference in every sentence. But our prayer books or hymns in Hindi are totally male-dominated and women have to recite them as males," Parmar says. 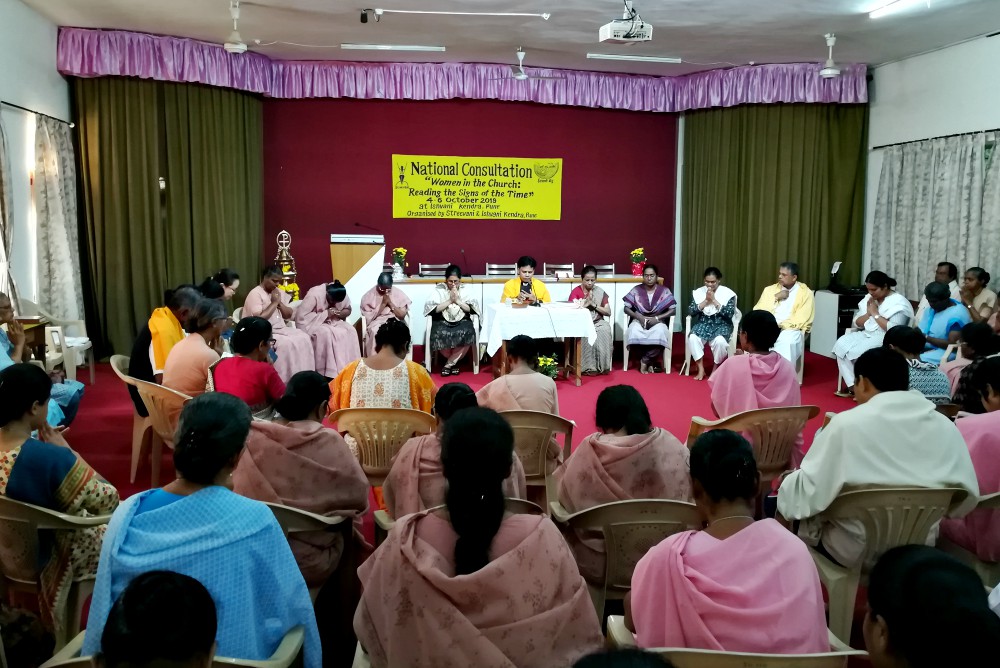 Catholic nuns attend Mass during a national consultation on "Women in the Church: Reading the Signs of the Time" earlier this month at Ishvani Kendra, Pune, western India. (Saji Thomas)

She called for "conscious efforts to rectify such indifferences to women." She said her community now uses gender-neutral language in prayers and liturgy.

"We don't call God as 'man,' or 'he' or 'him,' instead using inclusive terms such as people, humanity, humankind, they, them, our, etc.," she explained.

Event organizer George demanded that the Indian church leaders implement the gender policy they framed in 2010.

The policy had underlined that equality and dignity of all human persons form the basis of a just and humane society. It also maintained that women's empowerment is central to achieving gender equality.

George said the status of women in the church has remained the same since the policy's implementation.

She said she wants women religious treated on a par with consecrated men, stressing equality as the core for the church's growth as one in Christ, who never discriminated on the basis of gender, class or any other form.

"Thus, we can establish discipleship of equals in the church," George said. 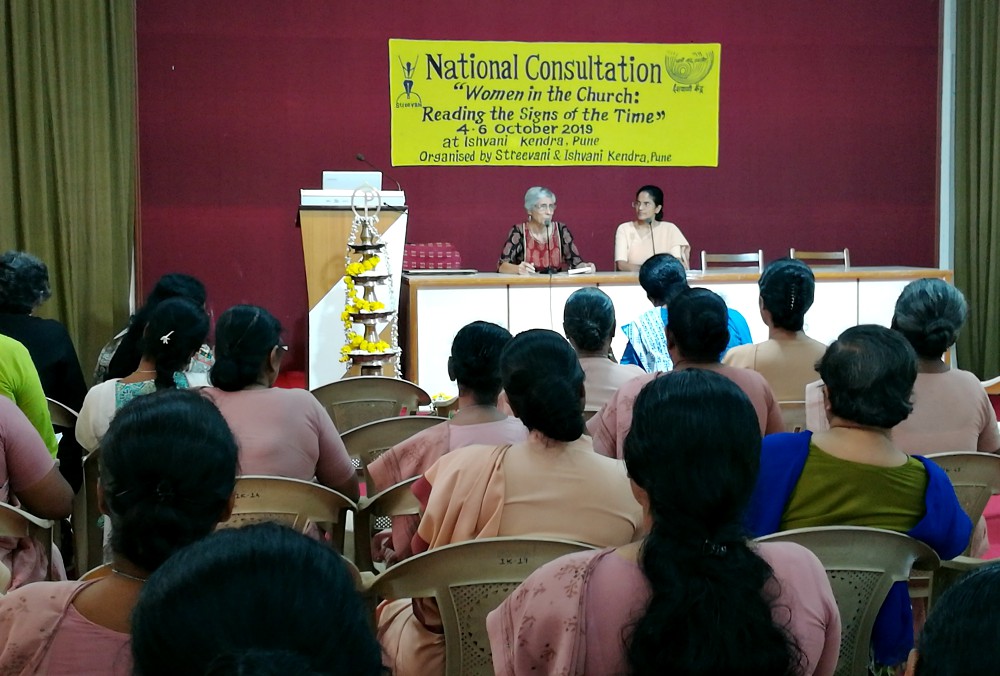 Virginia Saldanha, a laywoman theologian who presented a paper titled "Women's Voice That Challenges," said consecrated women are considered a cheap workforce in the church.

She blamed the mindset of both the clergy and many women's congregations for the "vulnerable position" of nuns in the church.

"It is high time the clergy got rid of clericalism and restored dignity and respect to women. They also should do their work rather than asking the nuns to do it," Saldanha said.

Chakkalakkal and other participants asserted that discrimination against women in the church could end only with their ordination.

"Christ has not ordained anyone as priest, as we see now. It is the outcome of the patriarchy and it is time to change," Chakkalakkal told the gathering.

A few male participants joined the demand for changes in church law to end gender discrimination.

Bishop Thomas Dabre of Pune, who opened the consultation, applauded the participants for choosing a "very relevant" theme, but he dodged the issue of the women's demand for inclusiveness. 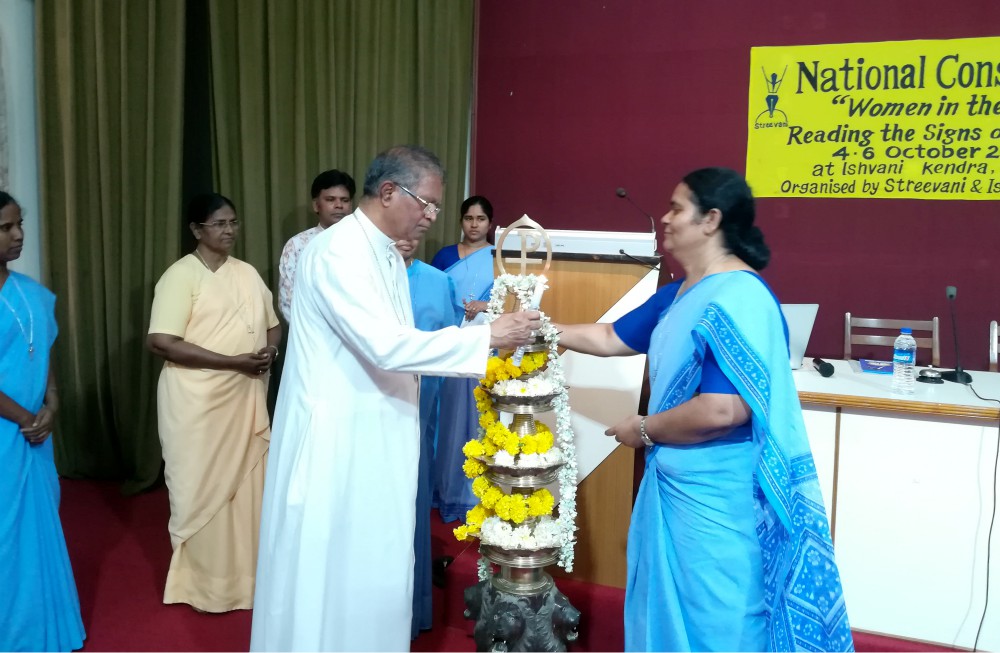 The prelate, however, encouraged them to assert their rights saying, "Today, the women of the church also must look beyond."

Dabre cautioned the participants about the dangers involved in their fight. "Don't end up winning the battle and losing the war," he said, and challenged them to embrace what Jesus instituted — an inclusive universal community.

Divine Word Fr. M.T. Joseph, assistant professor of the University of Mumbai who presented the keynote address, identified secrecy, patriarchy and hierarchy as three pillars of the church that form the basis of discrimination.

Fr. Victor Sagayam Z, newly named director of Ishvani Kendra (center for God's voice) managed by the Divine Word Society, wants the church to change laws and practices that are counter to the teachings of Christ, who stood for freedom and dignity of humans.

"Only then will the Catholic life become more relevant in the modern time," he said.

The consultation was jointly organized by Ishvani Kendra and the Streevani (voice of women) center of the Missionary Sisters, Servants of the Holy Spirit, popularly known as Holy Spirit Sisters.

Participants in a national consultation on "Women in the Church: Reading the Signs of the Time" in early October at Ishvani Kendra, Pune, western India (Saji Thomas)