A place to live is the basis of dignity

by Chris Herlinger
Social Justice
This article appears in the A Place to Call Home feature series. View the full series. 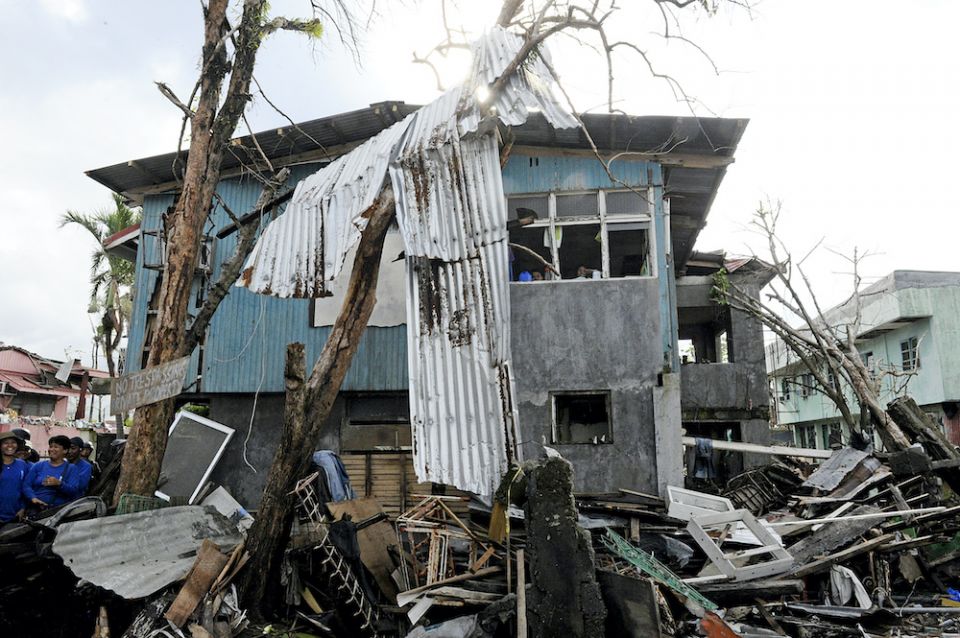 In this 2013 photo, residents of Tacloban peer out of a window of a damaged home as workers helping with clean-up efforts walk through the debris below following Super Typhoon Yolanda/Haiyan. On matters of housing and shelter, the Philippines is vulnerable to natural disasters (United Nations)

Editor's note: More than 1.6 billion people worldwide live in substandard housing. Of those, at least 150 million have no home at all.  A Place to Call Home is Global Sisters Report's special series for 2020, focusing on women religious helping people who are homeless or lack adequate shelter. Oct. 10 is World Homeless Day. 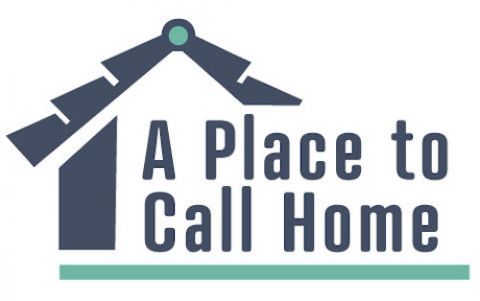 New York — In recognition of the annual Oct. 10 commemoration of World Homeless Day, advocates for those who experience homelessness say they must continue work on an issue that demanded renewed attention in 2020 — due to both the first-ever meetings held by the United Nations on the widespread problem and the effects caused by the global pandemic on homelessness.

While noting the progress made in 2020 to raise the visibility of homelessness as a global issue, particularly during U.N. meetings earlier this year, Quinn and other participants noted that the pandemic's effects have disproportionally affected women and girls, with increases of homelessness and domestic violence reported throughout the world. (Oct. 11 is UNICEF International Day of the Girl 2020.)

"The COVID virus is not an equalizer," Quinn said, saying lockdowns have resulted in more domestic violence, while economic shutdowns have affected the livelihoods of millions of women who work in farming and the "informal" sector.

Women and children were already vulnerable before the pandemic, and the situation has only worsened, said Quinn, a highly visible advocate at the United Nations for a global response to homelessness. "Accelerated action is needed," she said, urging ongoing work by fellow advocates in the coming years.

That sentiment was echoed by Riza Alcalde, a Filipino woman and mother of two young children who told webinar participants she had worked in nightclubs to support her family and had experienced in homelessness during the last decade.

Alcalde said she has been able to find a dignified path thanks to several humanitarian interventions, including by the Good Shepherd Sisters, who run a shelter for trafficked women in the Philippine city of Cebu.

"Governments should work closely with those who are homeless and partner with NGOs (non-governmental organizations) so that the needs of homeless people will be answered," she said.

Marietta Latonio, a researcher who has worked with the Good Shepherd sisters in Cebu and was honored in 2017 as a UNANIMA "Woman of Courage," agreed, pointing out the specific problems that lead to homelessness in the Philippines, including endemic poverty, domestic violence, human trafficking and the challenges posed by natural disasters.

Out of a total population of 106 million, there are at least 4.5 million people experiencing homelessness in the Philippines, with three out of four of those living in the capital of Manila, she said, citing figures from humanitarian sources. About 250,000 of the country's homeless population are children and youths, she said.

Noting that the pandemic has led to more street homelessness in recent months, Latonio said long-term solutions will depend on governments seeing the issue of homelessness in a holistic way.

"It's not just about homes," she said, citing the links between homelessness and other social ills. A commitment to human rights and social justice must be the cornerstone to any permanent solution to homelessness, said Latonio, who co-authored, with Australian Mercy Sr.Angela Reed, a 2015 study of trafficked women entitled "I Have a Voice: Trafficked Women In their Own Words."

Related: Q & A with Sr. Angela Reed, seeking to address the root causes of human trafficking 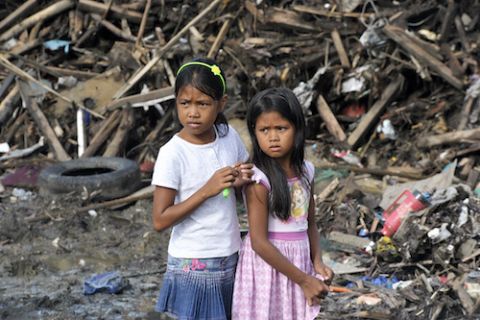 "Is hope coming? Maybe yes, or maybe no" she said.

If hope is coming, it will be hard-won, as several other advocates pointed out.

Whatever number is used, a disproportionate number of those homeless are women and children, who already face a number of challenges, Agwuegbo said. Services for women are inadequate, she said as one example, pointing out that there are only 24 shelters in Nigeria for victims of sexual violence.

Noting a spike of domestic violence since the pandemic began, and ongoing economic challenges — including nearly 22 million unemployed — Agwuegbo said Nigeria is experiencing "a failure of systems," and that millions are being denied "the right to dignity."

Only "persistent advocacy to hold government officials accountable" will ease these inter-connected social challenges, she said, adding that adequate housing is an important first step. "The minimum requirement for a dream is a safe place [to live]," she said. "The needs are urgent."

During the webinar, UNANIMA announced that a second set of ongoing studies of family homelessness would soon be available on-line, based on research and collaboration with New York University and St. John's University in Queens, New York. 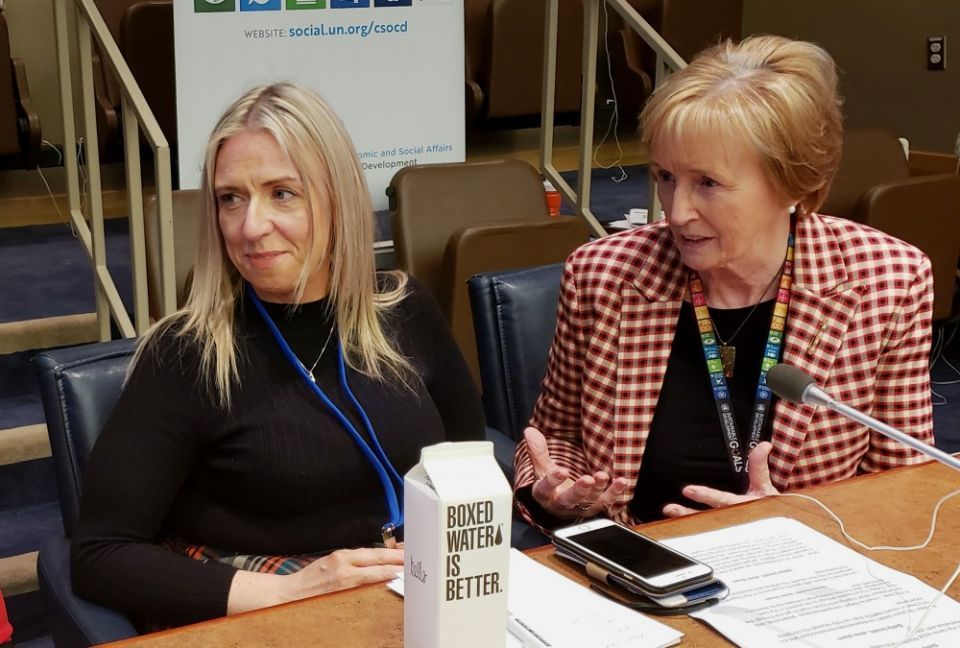 Madden spoke at the United Nations earlier this year during high-level meetings focused on homelessness, and in reflecting on that experience, she said, "I was valued, and when I spoke, people listened."

That type of witness and testimony, said UNANIMA researcher Kirin Taylor, is one example of some progress at the global level.

"I see a lot of reason for hope on this topic," she said, adding, "The ultimate experts [on homelessness] are those with lived experience."

Quinn and other advocates, including other Catholic sisters, worked for more than two years in getting the U.N. to address the issue of homelessness and affordable housing. That happened during Feb. 10-19 meetings of the 46-member Commission for Social Development, held at U.N. headquarters in New York City.

According to U.N. estimates, there are an estimated 1.6 billion people worldwide who live in substandard housing, with 150 million believed to have no home at all.

Related: A journey with the homeless

Insecure and inadequate housing in Zacatecas