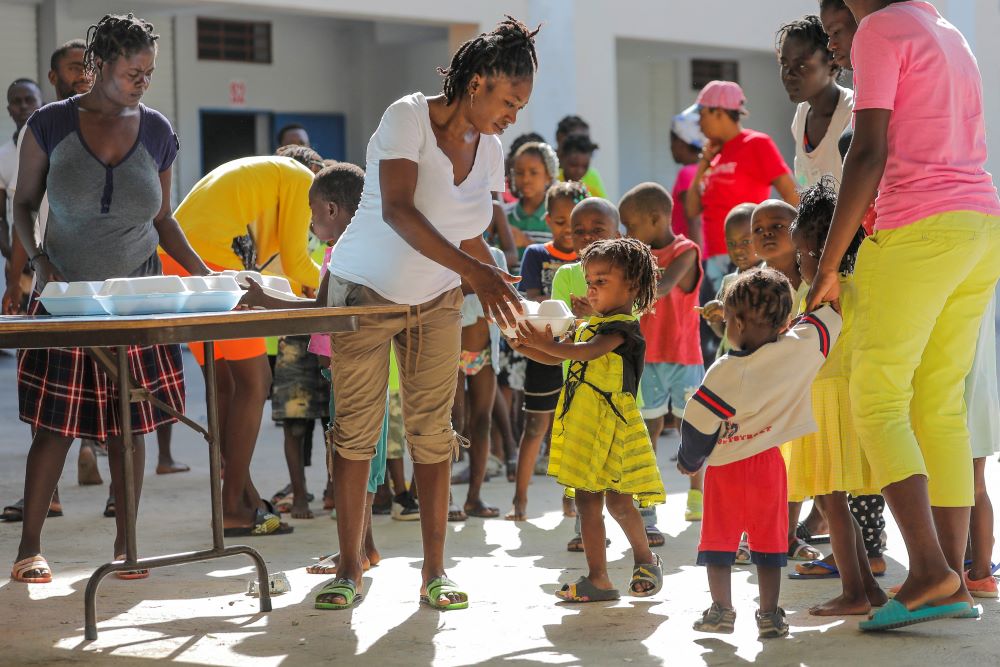 Haitian children who escaped violence in Cité Soleil line up to receive food at a school in Port-au-Prince July 22, 2022. (CNS/Reuters/Ralph Tedy Erol)

Many of us pray using the Ignatian method of putting ourselves inside the story. Have you ever done this with Matthew's account of the flight into Egypt? (Matthew 2:13-18)

Mary and Joseph had already left their home and life in Nazareth to go to Bethlehem for the census. They took very little with them because they did not intend to be away long. It was a difficult, yet miraculous and amazing journey. Their baby was born in very difficult circumstances, then there were angels, shepherds, kings.

And then, in a dream, Joseph was told that the baby was in danger. "So, Joseph got up and taking the child and his mother with him, left that night for Egypt" (Mathew 2:13). There was no time to prepare, and they took only the few possessions they could carry and traveled more than 300 miles to keep the baby safe. Just imagine what it was like, entering a foreign country! They may have spoken some dialect common to the Egyptians, but how well could they understand and communicate? They had no place to live. Joseph had a skill, but no job. And they had a baby!

et me share with you the story of just one family fleeing the political violence in Haiti. I received a phone call during the third week of Advent from a priest friend in Haiti telling me that the physician responsible for a hospital and multiple clinics throughout Haiti had been attacked in his car while leaving his residence. His wife (also a physician) and three young children were with him. His life had been threatened before, but this time it was with gunfire. No one was hurt, but the vehicle was struck numerous times. Unlike Joseph's dream, this was a nightmare telling him that they had to leave home, jobs, family and friends and flee.

I had worked with this doctor during my 16 years in Haiti. I know him as a good and gentle man who loves his work and country. I was put in touch with him because I live and work in a small immigrant community in Florida and assist new refugees, especially Haitians when they arrive. This would also be a miraculous intervention by the God who cares for those who suffer violence and fear and need to flee.

There are just two of us religious sisters living in Immokalee, Florida. The other sister is a retired immigration lawyer, and her community just happened to have an empty house that had been a convent and was soon going to be sold. Both our religious communities are committed to social justice and the plight of immigrants. Her community immediately offered the house to the family while they begin their request for asylum with Sr. Maureen, the immigration lawyer.

I invite you to reflect on this family’s story using the Ignatian method of prayer. Put yourselves in their situation. The parents speak some English, but their primary school daughters speak only French and Creole. The school system in Florida places immigrant children immediately into English-speaking classrooms. The parents are both physicians, but they cannot practice in America because Haitian medical licenses are not accepted. Because they are seeking asylum, they have to wait 180 days to apply for a work permit and then, what kind of work can they do?

In Haiti, they were educated, owned a home and their children attended private school. They came to America with what they could carry, with no promise that their request for asylum will be approved, with no promise of more abundant life. It was not their choice to leave the country they love and their careers that improved the lives and health of so many poor Haitians. (They worked for a Catholic nonprofit and for Doctors without Borders.)

It is Haiti's loss, and this family is losing so much leaving Haiti. Might they ever return to Haiti? They wait, like Joseph, for the next message from the angel. "Get up! Take the child (children) and mother with you and go back, for those who wanted to harm you are dead" (Matthew 2: 19-20). Until they know their next steps, we welcome them here and reassure them that they are safe.

As the Christmas season ends, let us not forget that life in exile did not end quickly for the Holy Family and their adjustment could not have been easy. Millions of refugees around the world await our kindness and compassion as they escape persecution, starvation, fear and the many other reasons they "flee into Egypt." Are we their "Egypt"? ("Immokalee" means "my home" in the native language!) Are we, perhaps even their angels offering messages of welcome and hope?