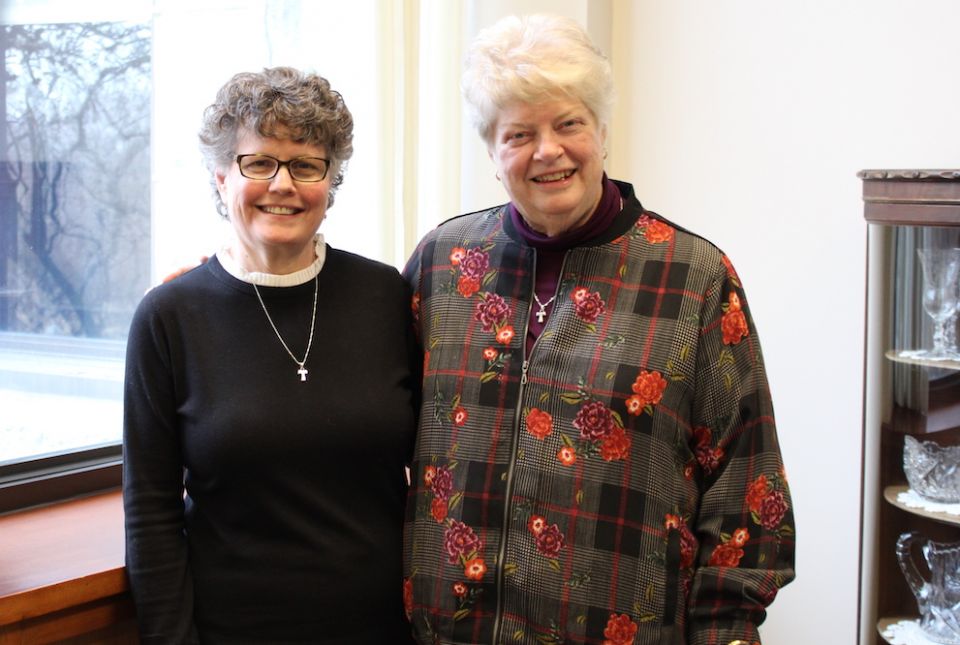 I needed a kidney and Franciscan Sr. Deborah Krist gave me one. Sounds so simple, yet so incredible. We are two sisters — not by blood but by vocation. We are both Sisters of St. Francis of Philadelphia. There was no telling that we would be a match at all, but Sister Debbie just knew she would be a good fit. "It was an act of God for sure," Debbie said. "It has been an amazing journey, which I believe, through the grace of God, has changed both our lives!"

I was diagnosed with Polycystic Kidney Disease in December 2012. This is a genetic disease that causes uncontrolled growth of cysts in the kidney, eventually leading to kidney failure. The number of cysts can range from just a few to many. The genetically dominant form of the disease affects more than 600,000 Americans and 12.4 million people worldwide. After the diagnosis, I was routinely tested and experienced gradual reduction in kidney function.

However, by March 2019, my nephrologist advised me that I was approaching Stage-5 renal failure and needed to seriously consider either dialysis or kidney transplant. Without either, I would not live long. After extensive testing, we discovered that I was a candidate for a transplant but, without a living donor, it could take anywhere from three to seven years to get a kidney — time that I just didn't have.

Asking for help from others is not an easy thing for me, I will admit. Needless to say, this reality was very overwhelming and I needed to take in the hard reality of this diagnosis. Already 2019 had been unfolding as a very challenging year for me. I was recovering from a complete hysterectomy for uterine cancer, as well as dealing with the death of my sister. Initially, I could hardly talk about it, yet I needed to reach out to my family, my friends, and my sisters for both emotional and prayerful support.

I definitely struggled with asking anyone to give me his or her kidney! Why would they do that? Finally I decided to seek out professional assistance to help me navigate through my emotions and the decisions that I needed to make. Being a professional therapist myself, I knew the value of talking things through with an outside individual who could listen objectively and without judgment. It was through this step that I was finally able to ask for the help I so desperately needed.

"From the time Lynn shared with me that her kidney disease had worsened and that she was in need of a new kidney, I wanted to give her this gift," Sister Debbie recalls. "She had been a mentor and a dear friend of mine pretty much since I entered the community. I felt like it would be a true blessing for me to be there for her in this capacity."

Sister Debbie was not alone in feeling called to help. I was so humbled by the support from my family, some of whom offered to be tested as donors, but also by the number of sisters who offered me one of their kidneys. Even sisters who obviously were not well enough. However, Sister Debbie was the first person to fill out the live donor form for the transplant institute.

Penn Transplant's process is that they only test one donor at a time because the testing is extensive. As Debbie progressed through the testing, I was told by the transplant coordinator that "it looked promising." I wanted to believe that, but I also didn't want to get my hopes up because of the rarity of a match from a non-family member or from the first person tested, so when the call came in, I was speechless! I had to get myself together before calling Debbie to tell her the news.

Only a few short months later — after extensive work-ups for both of us — the time for surgery had come. Sister Debbie filled out the donor form in mid-July and was matched on October 2. Surgery was on October 30. Both of us were so very grateful for the quality of care we received at Penn. We are extremely blessed to have an institution of this caliber to help us. I didn't have one bad experience. Penn is very Franciscan in nature. They really respect the dignity of every person and are very compassionate. And not only that, but they sent me home to heal and recover with a canvas bag with everything I could ever possibly need. They thought of everything!

So what's the prognosis? We are both healing nicely. There are provisions, of course, but overall the prognosis appears excellent. Sister Debbie, now with only one kidney, has to watch taking over-the-counter meds and vitamins, has some dietary restrictions, and must keep hydrated. For me — who now carries three kidneys (one good and two failing) — the recovery road is progressing well. I started out on several medications to fight off rejection and infection. As these medications are gradually being reduced, I get stronger every day.

Returning to work and getting back into a normal routine, both of us also say that we now have a new appreciation for life. What really matters becomes more focused … I am definitely so much more grounded in my trust in how God provides for us! There is a blessing that comes with being vulnerable. We are living in a world of exchange, and it is not always easy to receive, but I have been given an incredible gift.

Sister Debbie agrees with me: "I feel more grounded and grateful for the precious gift of life and for the blessing of sharing life through this donation." The overwhelming response of support and love from the other sisters in the congregation as well as from family and friends is what carried us through this difficult time. "It has been an amazing journey, "said Debbie. "I believe that through the grace of God, this has changed both our lives."

Editor's note: The author wishes to thank Florence Smith, Director of Communications, for her help with this. She also invites you to learn how organ donation saves lives. Click here to learn more.

[Lynn Lavin is a Sister of St. Francis of Philadelphia. With an advanced degree in pastoral counseling and graduate work in formative spirituality, she is presently a licensed therapist in private practice at a counseling and consulting center, where she does individual counseling, group process and planning, team development and consulting for religious congregations.]

The long legacy of service