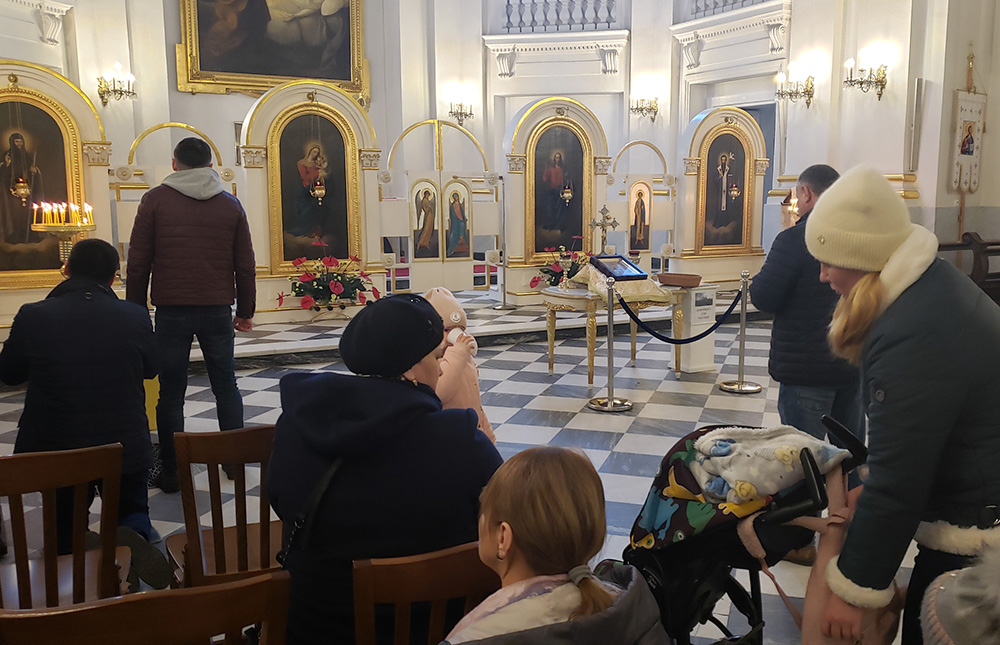 Ukrainian congregants gather for recent Sunday afternoon services at Dormishin Mother of God, a Ukrainian Catholic parish near Warsaw's Old Town. The church has become a center of gathering for Ukrainian refugees now living in Warsaw, Poland. "They look to God for help," said Basilian Fr. Peter Kushka, a priest at the church. "They are afraid." (GSR photo/Chris Herlinger)

As days shorten and nights lengthen, as December cold descends over Central and Eastern Europe, the celebration of Advent and Christmas offers a welcome reprieve from winter's challenges.

But for Ukrainians living in Poland, the joy of the season is also mixed with heartache and loss, longing and grief. As exiles, they are thinking of Christmases past and worried about a country struggling with the consequences of war: illness and hunger, deprivation and death.

"Ukraine has no electricity," Sr. Nazaria Mykhayliuk, a Ukrainian sister of the Order of St. Basil the Great (Province of the Most Holy Trinity), an international order of the Eastern Catholic Church, said recently.

"We are losing our best," she said of war's casualties, her hand touching her heart. "It is a cold and dark time."

Yet perhaps, she said, this is a chance at least for the Ukrainian refugee community in Poland to encounter something new and possibly deeper amid the current privations.

"This year will be a real Advent," she said. "It's not a time for presents or lights."

"Jesus was born in a poor place. It's time for Jesus' life. The real meaning is Jesus Christ." 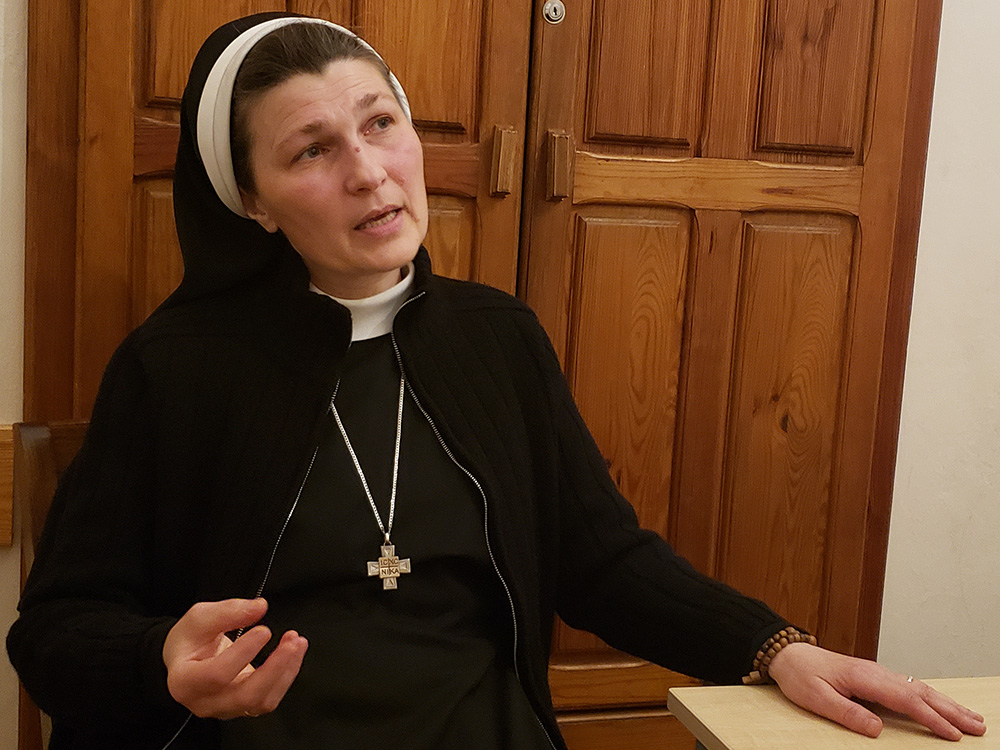 Sr. Nazaria Mykhayliuk, a Ukrainian sister of the Order of St. Basil the Great (Province of the Most Holy Trinity), an international order of the Eastern Catholic Church (GSR photo/Chris Herlinger)

Mykhayliuk, 51, has been reflecting on Jesus' life and the mysteries of faith amid conflict since the Russian invasion of Ukraine began in February. A month later, a superior in Warsaw asked her to come to Poland to minister to refugees.

Based at Dormishin Mother of God, a Ukrainian Catholic parish near Warsaw's Old Town, Mykhayliuk leads prayer and retreats and teaches catechism and night courses on iconography, a particular love she believes helps arrivals from Ukraine heal and recover in their uncertain state of exile.

"It's a way to stay in peace," she said. "Iconography is a way of prayer. It leads to freedom, a feeling of freedom."

On a recent Wednesday night, her two-hour class included the history of iconography, preparing the assembled students — 12 in all, 11 women and one man — to create their own icons over the coming months.

She stressed attention to detail, noting that in iconic art, "everything has its own meaning," and patience and respect for the unpredictable ways of creating art is required. 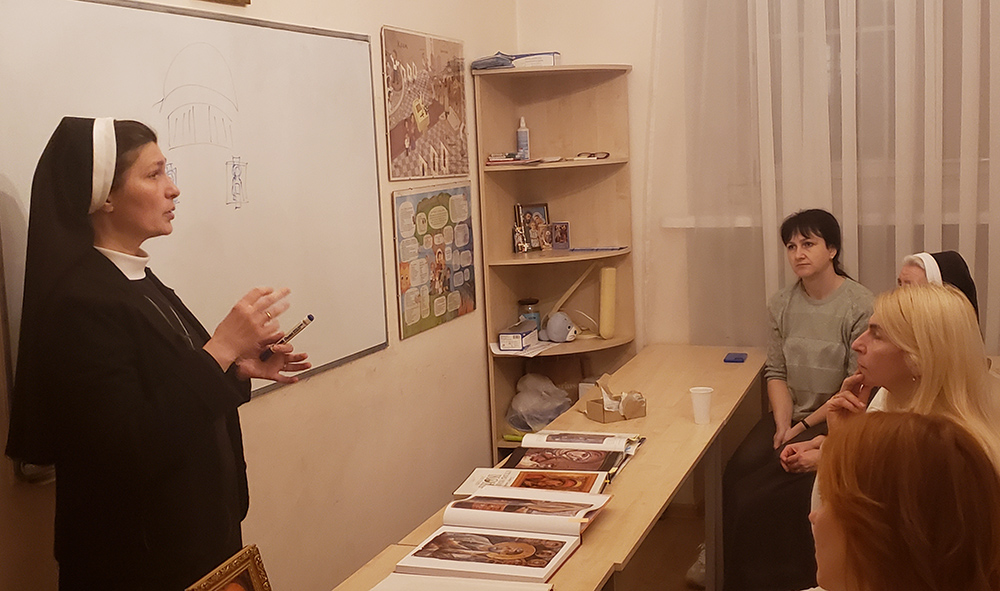 "The one you want to make is not necessarily the one you will make," she said.

Those words echo the overall experiences of the Ukrainian refugees as they finish an unsettled year that they could not have imagined last Christmas.

"War is not stable," said Basilian Fr. Peter Kushka, Mykhayliuk's colleague at the church. "Everything becomes unstable. One day, you are secure; the next, you are poor."

Because of that instability, refugees — both Catholic and Orthodox — have flocked to the church since February.

"They look to God for help," Kushka said. "They are afraid."

Many left Ukraine without even their passports, he noted, making future plans more challenging. Some haven't found work yet, which is a real concern now that some public refugee assistance is starting to end.

The future is hard to discern, Kushka said. The war rages on, and many refugees are reluctant to return to Ukraine permanently. 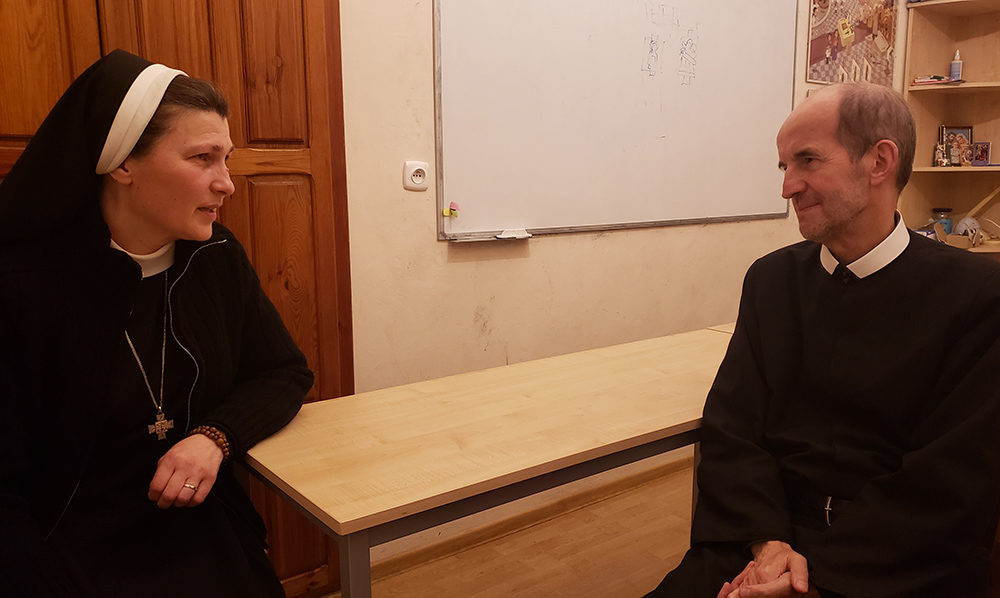 And though the welcome afforded them in Poland has been deep and substantial, there is talk among refugees that the pressures of welcoming more than 1.5 million refugees into the country are beginning to show: a cross word here, an angry glance there.

Maria Shumska, 45, who is from the Lviv area in western Ukraine, said she found "cold reactions" while looking for work in the Warsaw area. She recalled a Polish landlord telling her he would not rent to her family because of fears that "Ukrainians will damage the apartment."

She has also had to be persistent about claiming the small amount of government assistance the family is entitled to.

"I have to help Poles first and Ukrainians next," one local official told her in a heated discussion, she said.

Yet she will not give up.

"Everyone knows me," she said, laughing.

Still, Shumska and others reiterated the kindness they've been shown, though they acknowledge the situation they face remains challenging.

Irena Atamaniuk, 52, arrived in Warsaw on March 4 with her husband, Ihor, and their 15-year-old son, Andrii. Their situation is perhaps not as dire as others': Ihor had worked before the war at the Warsaw University of Life Sciences as a mathematics instructor, and the college has provided the family dormitory housing.

Before they left the southern Ukrainian city of Mykolaiw, it was under siege from Russian forces. The family once spent the better part of a day at a bomb shelter with hundreds of others, waiting to see what would happen, fearful of both the bombardments and other threats, like looters.

The Atamaniuk family ultimately decided to take the risk and leave. They drove to Odesa, where they stayed briefly, then crossed the border into Moldova before a variety of flights took them to Warsaw. 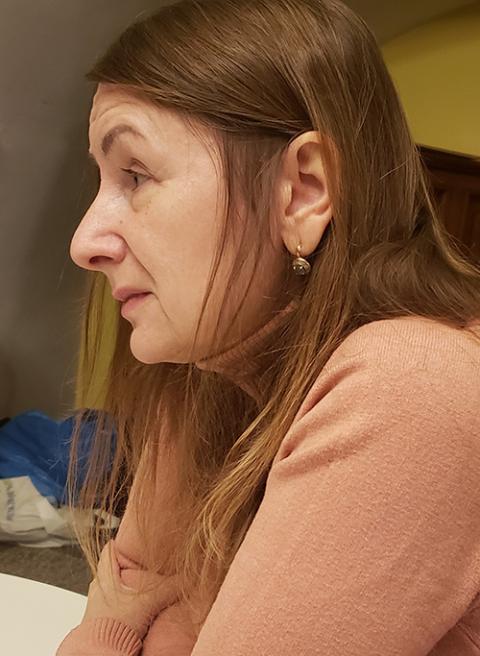 Irena Atamaniuk during an interview at the basement of Dormishin Mother of God, a Ukrainian Catholic parish near Warsaw's Old Town (GSR photo/Chris Herlinger)

The days are anxious. A government manager back in Mykolaiw, Irena Atamaniuk now cleans houses and wishes better jobs were available, but she said her prospects are limited now given her rudimentary Polish. (She attends language lessons twice a week.)

"People are kind and helpful," she said, but she acknowledges that Poles see her and others as temporary visitors.

She does, too. She hopes to return to Ukraine but knows that the time in Poland may stretch out much longer than she and others had expected.

One concern is keeping up with fellow congregants of her church back home, the historic Church of Zakaria and Elizabeth. The pre-war renovation and restoration work of the church is Atamaniuk's driving passion and, now, worry.

Though the church has not been damaged — yet — it sits near a military hospital, and Atamaniuk, who is Ukrainian Orthodox, said she is constantly anxious about the church building and its remaining parishioners.

"I miss my religious community," she said, tearing up.

Taking Mykhayliuk's iconography course is helping her through anxious days full of fear about the possible threats to the church and a potential nuclear strike against Ukraine.

Prayer is also a comfort.

"We hope next Christmas will be better," she said. "I pray to God and do feel God is here with us." 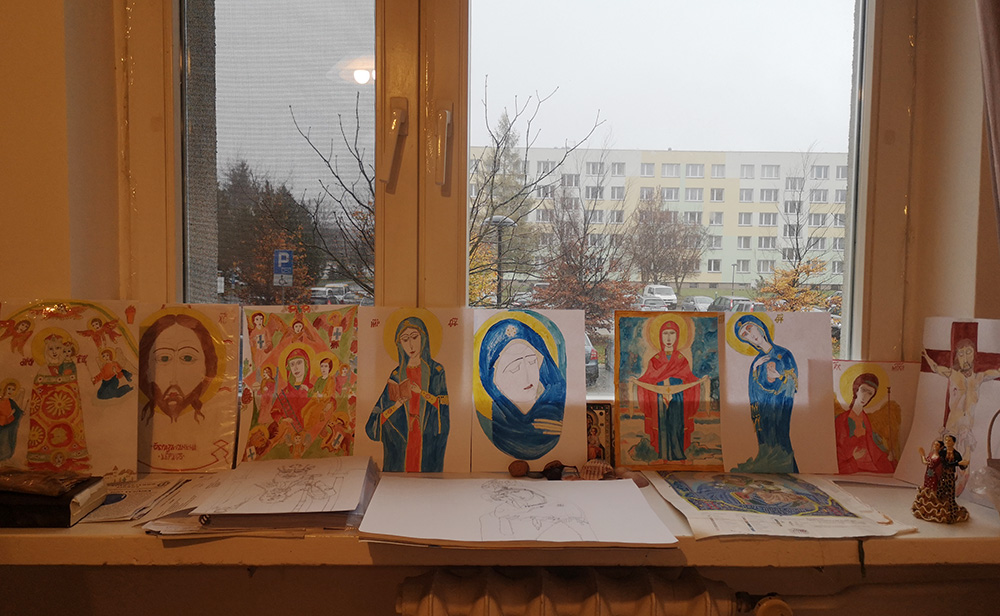 Icon work by Irena Atamaniuk in her Warsaw dormitory apartment. She is taking a course on iconography from Sr. Nazaria Mykhayliuk, a Ukrainian sister of the Order of St. Basil the Great. (Courtesy of Irena Atamaniuk)

She said she believes Ukraine will ultimately win the war because its people are committed, united and strong. "Ukrainians have a deep faith and love of their land."

Shumska, 45, has similar faith and optimism but is also clear-eyed about her present situation. She and her husband, Yuri, have five children, ages 8-15, and also had ties to Warsaw before the war. Yuri had work as a construction worker, and the family had stayed in Warsaw intermittently because one of the children, an 11-year-old son, required medical treatment for a physical disability.

Now living in Jozefow, a community about 10 miles southeast of Warsaw, the family is "coping," Shumska said. They live in a home called a "summer kitchen," a small one-room space with an adjoining kitchen.

Shumska now works as a health aide but admits she has trouble with the Polish language. The children are adapting better, she said. "Change is not a problem for them." 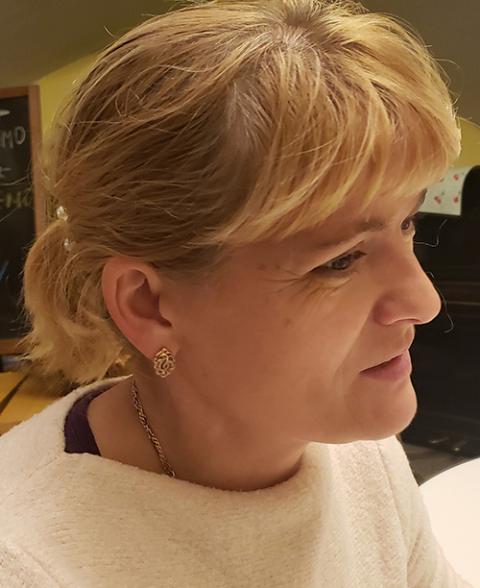 Maria Shumska, who is from the Lviv area in western Ukraine, said she found "cold reactions" while looking for work in the Warsaw area. (GSR photo/Chris Herlinger)

Relative proximity to Lviv, which is close to the Polish-Ukrainian border, also helps. She has returned to Ukraine about once a month to see her ailing father and hopes to return, if even briefly, to see family for the holiday.

Shumska reflects a lot these days on her past association with the Sister Servants of Mary Immaculate, who work in both Poland and Ukraine. The sisters educated her, and she entered their convent at age 20 to prepare for religious life. But after five years, she decided to leave, eventually marrying Yuri and growing their family.

The current war and the work of sisters prompt occasional thoughts about a return to religious life.

"Maybe when the children are grown," Shumska said, laughing. What of her husband? "He might say, 'Do what you want,' " she said, laughing again.

Kidding aside, the mark of the sisters remains.

"The sisters taught me to be persistent and have a strict plan," she said. "They had a great influence on me, on how to bear problems and manage my life."

Shumska, like Mykhayliuk, says amid the uncertainties and vicissitudes of the last year, her religious faith remains her bedrock.

"Nobody expected to have a wartime Christmas," she said. "It's sad. But Christ was born, and that's the main thing. That gives us hope."