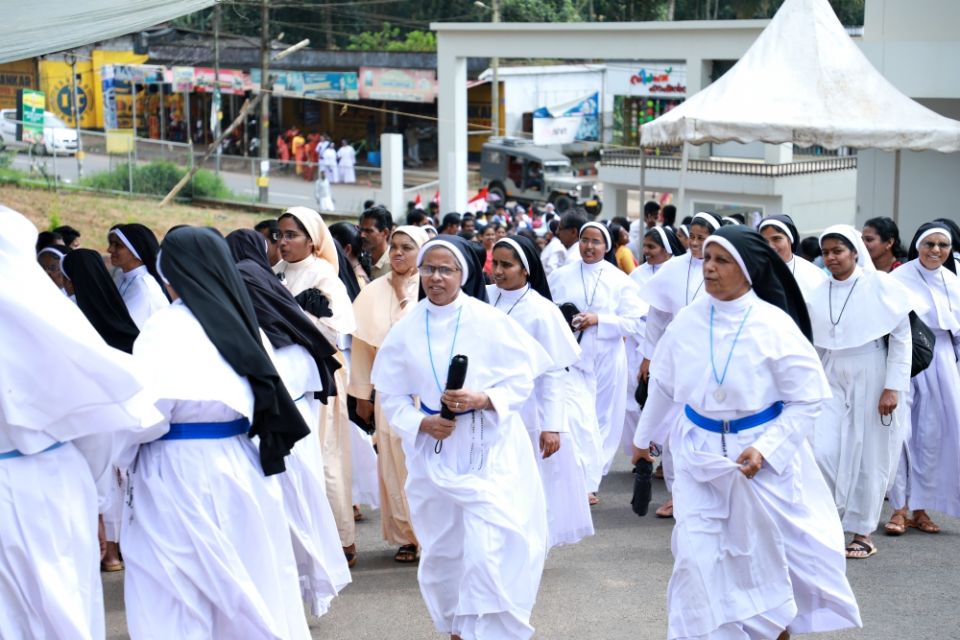 DWARAKA, India — More than 1,500 Catholic nuns from 34 congregations came together in the southwestern Indian state of Kerala on Sunday, Sept. 15, to correct what they say is a negative portrayal of religious life by media and anti-church groups.

"People, including Catholics, now look down upon us. We want to tell the truth about religious life to everyone, including the media," said Sr. Ancy Thomas, one of the conveners of the meeting at the Pastoral Centre of Dwaraka parish in the Mananthavady Diocese.

Many women religious and conservative Catholics say their image has been undermined by a media spotlight on the case of a bishop charged in the rape of a nun and on stories of activist sisters who have been disciplined or dismissed by their congregations. Indian newspapers, online media and talk shows have criticized the way the church treats sisters, they claim, saying some reports have gone so far as to question the rationale of religious life. 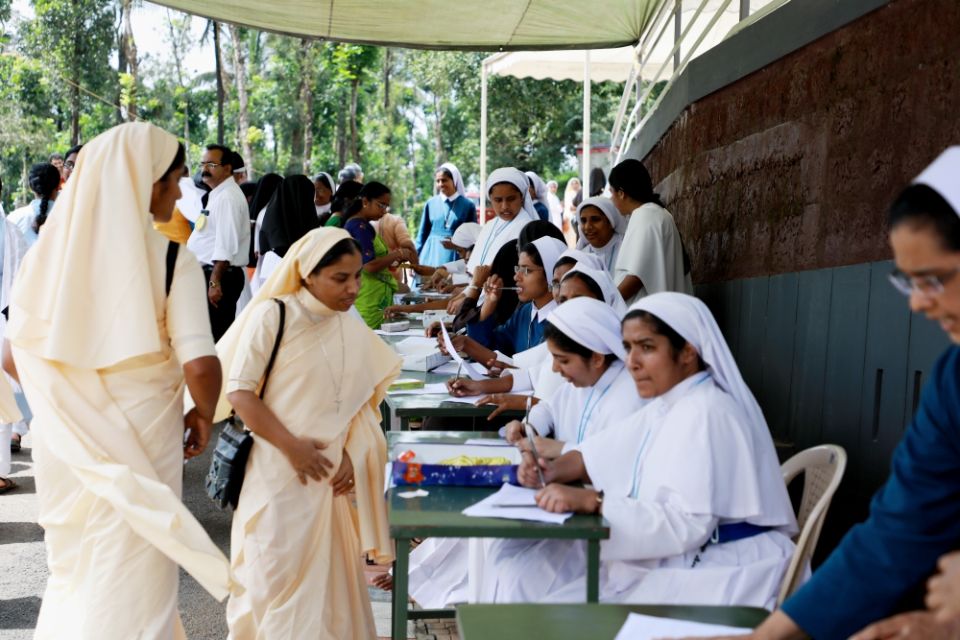 Catholic nuns register their names for a prayer gathering to address negative media coverage of religious life on Sept. 15 at the Pastoral Centre of Dwaraka parish in Kerala, India. (Saji Thomas)

Thomas, a member of the Congregation of the Mother of Carmel, told GSR that Catholic religious women and men live "a delightful consecrated life, but constant negative media coverage has damaged our public image."

The three-and-a-half-hour program started with recitation of the rosary and ended with the adoration of the Blessed Sacrament. During the adoration, the participants held lighted candles and prayed for more strength to live their vocation as true witnesses to God.

Most speakers were nuns, and women religious managed the entire program. Priests who came to support them did not sit on the dais.

One clergy supporter, Fr. Roy Kannanchira, said the consecrated life in the Catholic Church is a journey from "plenty to empty."

"Therefore, such an ascetic life is not a cup of tea for everyone who thinks it is an easy life from the outside," the Carmelites of Mary Immaculate priest told the gathering. 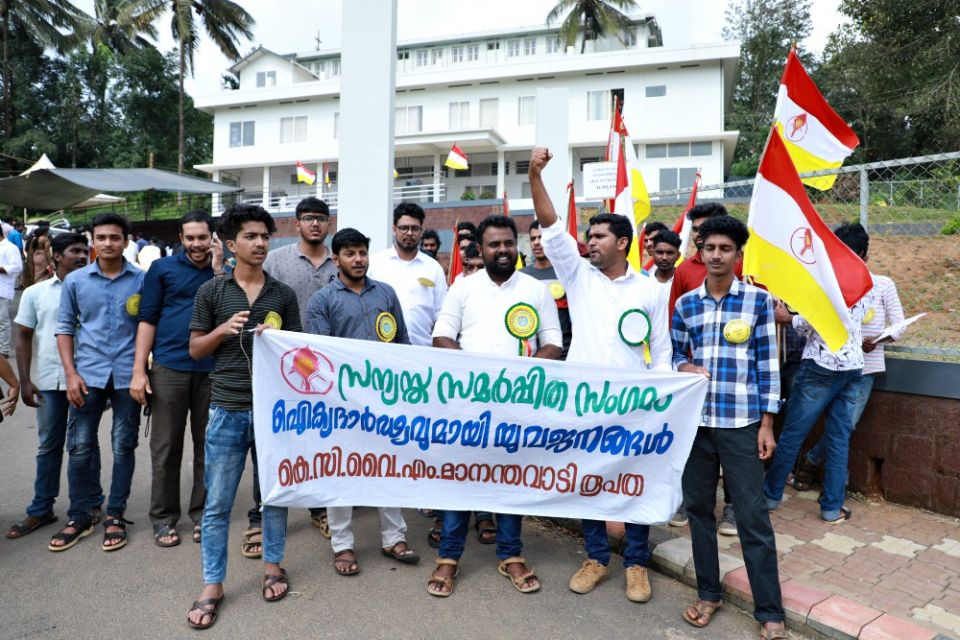 Members of the Mananthavady diocesan unit of the Kerala Catholic Youth Movement display a banner pledging support to Catholic religious life at the Pastoral Centre of Dwaraka parish. (Saji Thomas)

Kannanchira, an editor of the Deepika (lamp), a Malayalam newspaper managed by the Kerala church, said Catholic religious have so far responded to the negative media with silence. "But from now on we will raise our voice," he said.

Fr. Jose Kocharackal, spokesperson of the Mananthavady Diocese, alleged that media groups have characterized estranged Catholic religious as heroes of faith. "It is part of a larger conspiracy to undermine Catholic values by atheists and fundamentalists masquerading as human rights activists," he told GSR.

The nuns also found support from the Kerala Catholic Youth Movement and laity organizations of the Mananthavady Diocese.

Saniya Saju, a nursing student, said Catholic youth in general do not endorse the media coverage of religious life.

"The media is doing a huge injustice by belittling Catholic consecrated life for the failing of a few individuals," she said, adding that she knows hundreds of nuns and priests who serve others selflessly, but, for the media, they do not exist. 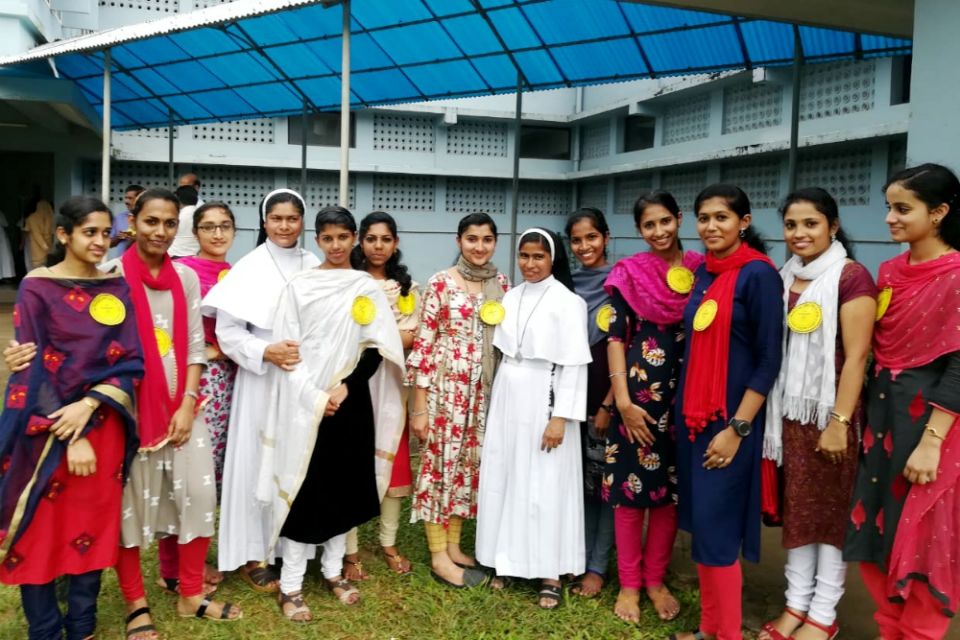 Sr. C. Delphi Maria, another Carmelite nun who attended the gathering, lamented that some groups criticized "our dedicated life without understanding Catholic religious life or the people who live it."

Religious life is "in no way denial of one's rights or a life ignored and isolated," as the media project it, Maria said. Religious life is the essence of the Catholic Church, she asserted.

Catholic religious life came under increasing media scrutiny in Kerala after five members of the Missionaries of Jesus* last year staged a sit-in to demand the arrest of Jalandhar Bishop Franco Mulakkal, who was accused of raping their former superior general. The protest led to his arrest and he was later freed on bail.

The immediate provocation for the prayer meeting in Dwaraka was a Sept. 1 full-page article on Sr. Lucy Kalappura in a weekend edition of the Mathrubhumi (Motherland), a leading daily newspaper in Malayalam, the language of Kerala.

The 54-year-old nun was dismissed by the Franciscan Clarist Congregation, which accused her of violating vows of poverty and obedience. Kalappura, who now lives in a convent near Dwaraka, has appealed to Rome against her expulsion.

The Mathrubhumi and other media outlets allege that Kalappura was dismissed for her support of the five nuns who protested against Mulakkal. Kalappura also used media to accuse the church leaders of protecting Mulakkal and ignoring the rape survivor and her supporters.

On Sept. 4, hundreds of nuns and priests from various religious congregations demonstrated on a road outside the Mathrubhumi's office in Kannur, a major city in Kerala some 60 miles west of Dwaraka, against what they called biased media reports that tarnished their image.

On the same day, the major superiors of the religious congregations in Kerala met in Kochi, 170 miles south of Kannur, to deplore media attempts to idealize disobedient acts by some religious.

"Anti-Christian forces are deliberately spreading calumnies to defame Christian asceticism in society," said a statement from the Kerala Catholic Bishops' Council that convened the Sept. 4 demonstration.

The statement accuses the media of violating basic journalism ethics by presenting unverified allegations as facts.

During this period, media outlets have shown a renewed interest in church affairs, especially in the lives of nuns and priests.

Some stories highlighted the disparity between priests and women religious in the church. The Catholic magazine Assisi, backed by the Capuchins' Province of St. Joseph, criticized priests in Kerala for treating nuns as servants.

The protest in Kannur took place despite the Syro-Malabar Church's synod in January taking nuns and priests to task for going to the streets. Such protests and strikes, the bishops warned, crossed all limits of discipline.

The Dwaraka event, however, was held inside a church institution but was open to the public and the media.

Sr. Jossy Tom, a council member of the Mananthavady Clarists who attended the prayer meeting, said sisters have silently suffered insults but continued with their mission. "But now the time has come for us to raise our voice and explain our side," she said.

People, including her own family members, address her as "sister," when seeing her religious habit, "but they really do not understand the meaning of the consecrated life." she said.

However, some nuns say the adverse situation is an opportunity for them to strengthen their spiritual life. 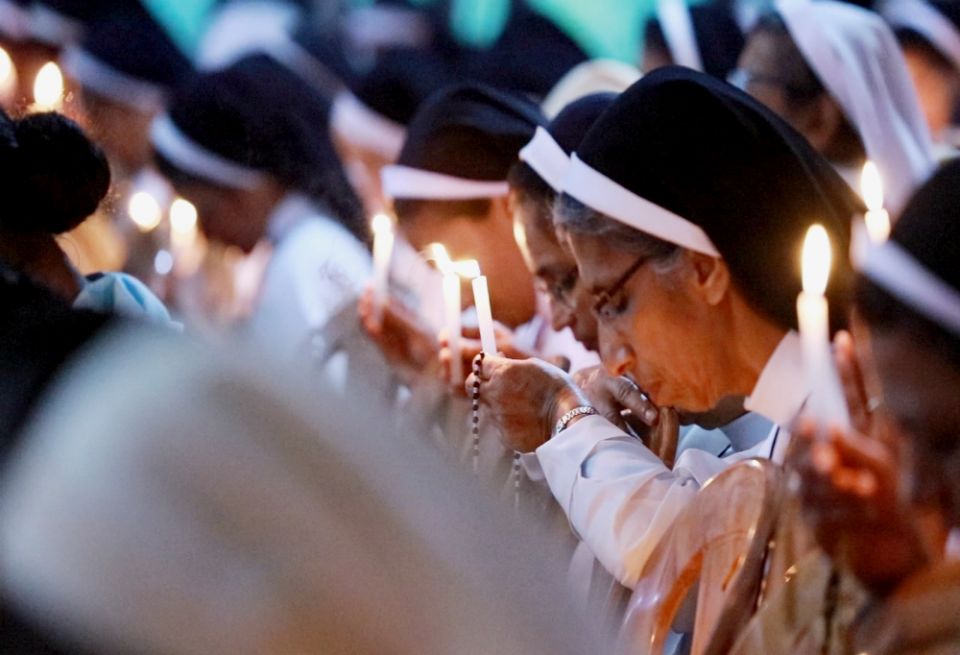 Catholic nuns with lighted candles pray at the adoration of the Blessed Sacrament in support of religious life at the Pastoral Centre of Dwaraka parish in the Mananthavady Diocese in Kerala, southern India. (Saji Thomas)

Sr. Jasmine Maria, provincial of the Mananthavady Carmelites, said that the criticism has helped them look inward and draw inspiration from God.

Sr. Innocent Ayyankanal, a social worker and member of the Missionary Sisters of Mary Immaculate, says the negative media campaigns will not affect the religious if "we are more directly connected with people."

"We have to be more interested and focused on people's needs," she said. "It will definitely strengthen us and also them," she said.

"Vocation is an irresistible call from God to an individual and it is not one's selection," said the nun, who noted a decline in the number of people joining religious life.

Still, she said, the few who join now would be "a hundred times more powerful and qualified to face the challenges of the modern world."

*An earlier version of this story misidentified the community.

In appreciation: Sr. Kate Kuenstler, canon lawyer for the people of God