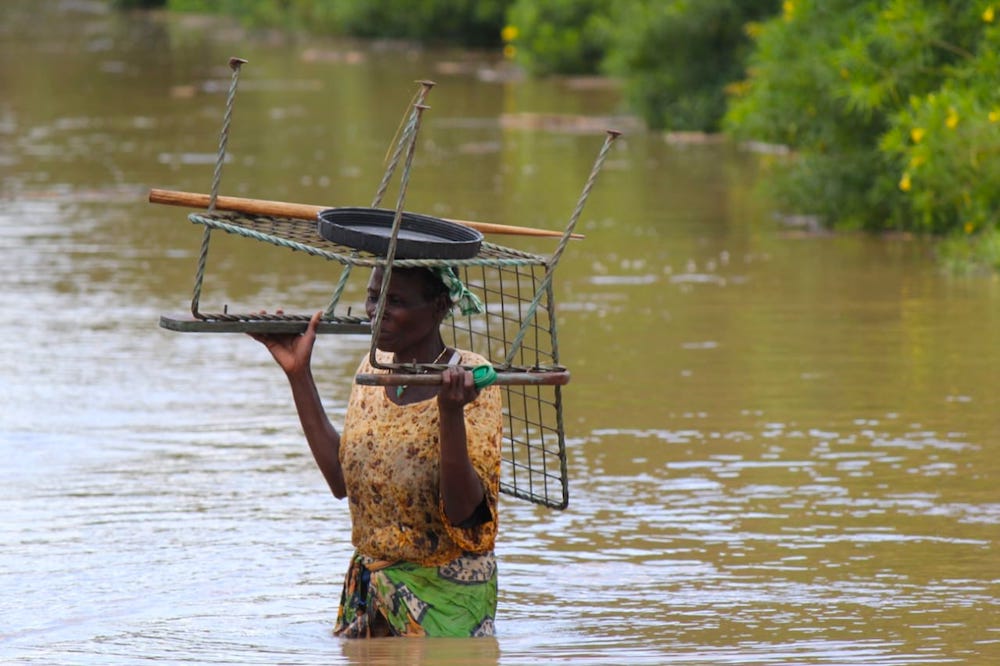 A woman carries her belongings as she move to safety after her house was submerged following heavy rainfall in Budalangi, western Kenya, in late April continuing into May. (John Ojanji)

Leonida Oloo's worst nightmare came back to haunt her again the night of April 28, when the Nzoia River spilled over its banks in the middle of the night and engulfed the surrounding communities.

"It was shocking. I can't believe I'm still alive," said the 81-year-old grandmother, who lives in this remote area of western Kenya near the border with Uganda. "I was woken up by loud screams from neighbors around midnight. I forced myself off the bed and stepped into a pool of water. Within minutes, water had risen to my neck as I shouted for help."

Oloo was luckily saved in time by local boatmen who raced through thick fog using boats and canoes to find her and other stranded neighbors. On that night, the flood left dozens of people dead and thousands homeless in several villages.

"I really thank those youths who saved my life. I have lost loved ones and friends to floods," said Oloo, recalling how two of her adopted children died in flooding 18 years ago that also claimed the lives of three of her cousins. Flooding happens regularly in this region, and she has lost many friends and family members over the years.

She is now among families taking refuge at St. Cajetan's Catholic Church Sirimba in Budalangi and facing a bleak future even as the nation steps up efforts to contain locusts and the threat of COVID-19.

Global Sisters Report found families the day after the flooding crowded inside a church and classrooms without face masks or the ability to practice social distancing. There were shortages of health care services, tents, latrines and sanitation facilities. Children slept on mats spread out on the cobblestones while several women clutched crying babies, trying to calm them. Many said they hadn't eaten anything for days.

Religious sisters are among those who've moved swiftly to provide relief measures. Within a week, the sisters were helping to distribute some food, clothes, mattresses and beddings to some of the flood victims. They are also providing the residents with soaps, hand sanitizers, masks and encouraging social distancing.

Sr. Litty Thattil, a nurse at a local hospital in Budalangi, said residents living in the church compound are also suffering from malaria, diarrhea and pneumonia. The heavy rainfalls have caused most latrines to overflow, which creates the potential for a cholera outbreak and other waterborne diseases, she said. 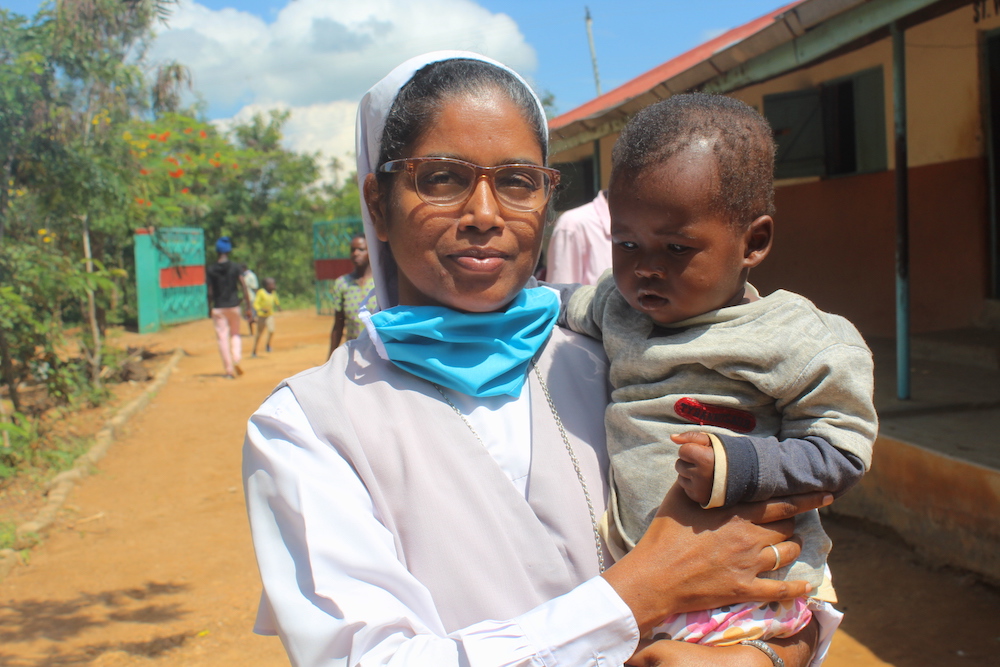 Sr. Litty Thattil, a member of Missionary Sisters of St. Ann, Luzern, carries a child after examining him at St. Cajetan's Catholic Church Sirimba in Budalangi, western Kenya. Many children here are suffering from malaria and pneumonia. (John Ojanji)

"We have so many problems here," said Thattil, a member of Missionary Sisters of St. Ann, Luzern. "Many people, especially children, are sick because of dirty water and congestions in the camps. They have not enough food, mosquito nets and blankets. People are also scared of getting coronavirus because social distancing is impossible due to overcrowding."

The troubles here are mirrored in many other parts of the country, where floods and landslides have wreaked havoc, destroying homes, roads and crops. In parts of central and northern Kenya, several homes, schools, parishes and convents have been submerged in water following days of heavy rainfall. In April, several priests and nuns had to be evacuated to safer zones after floods submerged their residential areas.

The East African country has so far lost nearly 250 lives due to floods and confirmed more than 1,962 cases of COVID-19 with 63 related deaths. Locust swarms have also wiped out crops across the country, where millions of people already struggle to obtain healthy food.

The government has advised those living in floodplains and landslide-prone areas to be more cautious and move to higher ground, warning that more heavy rainfall is expected in parts of western, central and the coastal region of the country. But the government hasn't offered any permanent resettlement plans for those affected by floods and unusually rainy weather. Those moving often take shelter in various schools and churches.

"I'm calling on the government to help those affected by floods especially during this time the country is battling the coronavirus pandemic." — Bishop John Oballa Owaa, Ngong Diocese, Nairobi, Kenya

At a news conference in Nairobi on May 13, Devolution Cabinet Secretary Eugene Wamalwa said, "Kenyans who have lost their lives due to floods are now 237. That is a very high number compared to those Kenyans who have lost their lives to COVID-19. With rains going on and our dams filling [up], it means more people will be affected. We are urging people in flood-prone areas, mudslide-prone areas to move to safer grounds."

The Ministry of Devolution supports Kenya's 47 counties through policy formulation and shares the function of disaster risk management between the national and county governments.

The Catholic Church is urging the government to allocate resources to support more than 800,000 Kenyans affected by floods in various parts of the country.

"I'm calling on the government to help those affected by floods especially during this time the country is battling the coronavirus pandemic," said Bishop John Oballa Owaa of Ngong Diocese in Nairobi, Kenya, in an interview. "We are also asking the public to move to safer grounds to avert loss of lives and properties."

Sisters, who have been distributing relief items to families affected by COVID-19 restrictions and food shortages caused by locusts destroying crops are appealing for humanitarian support in regions where landslides and floods have displaced thousands.

Many feel overwhelmed by the rising numbers of flood victims that are straining already stretched resources. "We are actually appealing to the government and well wishers to assist us with medical supplies, humanitarian relief and other assistance to help children and expectant mothers," said Thattil, noting that they have been forced to use their own money to assist the affected families. "People here require medicines, and they don't have money to pay for it. We are running out of medical supplies because the demand is high, and we don't have money to buy more." 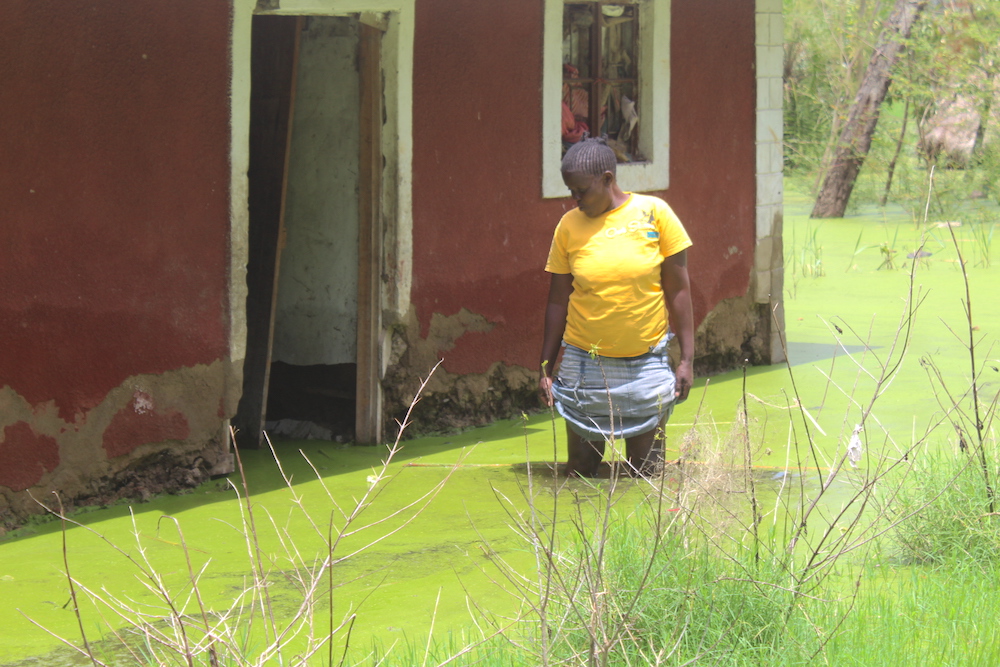 A woman stares at her house that was submerged following heavy rainfall in Budalangi, western Kenya. (John Ojanji)

Sr. Miriam Jagogo, a regional superior of the Franciscan Sisters of St. Anna in the region of Siaya in western Kenya, said they have decided to start contributions among sisters from their various communities to pool together resources and help those families affected by floods.

So far, they have distributed food, mattresses, blankets, clothes, sanitary towels, grains and other items to more than 200 families affected by floods around Kisumu, a port city in western Kenya.The sisters are struggling to raise resources to help the families, many appealing to donors to help families displaced by flooding caused by heavy rains and backflow from Lake Victoria.

"We would really want to reach out and assist many more families, but we have no constant supply to give continuously unless we get help elsewhere," said Jagogo. "I urge the government and well wishers to come out and help these families. They really need our help especially during this period of COVID-19."

Kenya continues to impose wide-ranging and stringent measures—including the national curfew and cessation of movements in the counties of Nairobi, Mombasa, Kwale, Kilifi and Mandera—to deal with the pandemic.

Sisters, who have been distributing relief items to families affected by COVID-19 restrictions and food shortages caused by locusts destroying crops are appealing for humanitarian support in regions where landslides and floods have displaced thousands.

The issues extend beyond Kenya and affect much of the East African region. Heavy rains and floods during the month of May have killed hundreds of people in Kenya, Uganda, Somalia, Rwanda and Ethiopia and forced hundreds of thousands from their homes. The East African countries have also been hit by a locust invasion and are bracing for the effects of COVID-19.

At least 65 people have died in Rwanda after landslides caused by heavy rains damaged houses and washed away bridges especially in the mountainous north-west of the country. In southern Somalia, more than 30 people have died in the flash floods that have affected thousands, according to United Nations Office for the Coordination of Humanitarian Affairs.

Sweeping floods in western Uganda have killed dozens of people and displaced thousands.

Speaking to GSR in a telephone interview, Victor Bwire, a resident of Budalangi which has suffered from perennial flooding during rainy seasons, observed that the government needed to build dikes to help end perennial flooding that has killed hundreds of residents.

"The government is not really doing enough to deal with perennial flooding in the region," said Bwire, who is also an environmental journalist and the deputy chief executive officer at the Media Council of Kenya. "The government needs to replace the current dikes, which are now old and weak, and also deepen the region where the backflows occurs so that the water can flow well into the lake. This will prevent future flooding."

While urging the government to set aside permanent resettlement schemes to help people during floods, Bwire said human activities are one of the main causes of backflows and increased water levels.

"The lake is actually overused. People use the lake for all kinds of activities. They wash clothes and take baths in the lake. Materials that are not supposed to be in the lake make it dirty and are usually deposited at the banks of the lake, and as a result when it starts to rain the water cannot flow well into the lake and so it is forced back to the land leading to excess flooding," he said.

For now, Oloo and other residents living in various camps across the country say little is being done to address their plight and cried for more help.

"We are at risk of dying from coronavirus, hunger, cholera or malaria," said Oloo. "The government should not concentrate on fighting COVID-19 and forget about us. We are going to die."

[Doreen Ajiambo is the Africa/Middle East correspondent for Global Sisters Report based in Kenya. Follow her on Twitter: @DoreenAjiambo. John Ojanji contributed to this story from Budalangi.]