Sr. Begoña Iñarra of the Missionary Sisters of Our Lady of Africa attends Christmas celebration in Paris at the Bakhita Center for women in situations of sexual exploitation. (Courtesy of Begoña Iñarra)

After years in Africa — the Democratic Republic of the Congo, Uganda, Ethiopia, Mozambique and Kenya — first teaching sciences and later on doing adult education and justice and peace ministry, I spent some years in Brussels lobbying the European Union on African economic issues. In January 2016, I was sent to Paris with the mission to get involved in the fight against human trafficking.

I discovered a part of the "hidden Paris" where women are trafficked for sex exploitation. I spent Monday mornings at the Jorbalan Home teaching French to formerly trafficked women who were rebuilding their lives. On Thursdays at the Open Day Center Bakhita, I welcomed trafficked women working on the street. And on Tuesday afternoons and evening, I visited Nigerian women obliged to sell their bodies along the Pyramid road at the Vincennes Wood, southeast of Paris, in the open air — in rain, snow, cold or heat.

As a volunteer with the Christian association "Liberation to Captives," I worked in the organization's truck, which had a sitting room where the women used to come to chat, do some French, and protect themselves from the cold, the rain and the police. But more often to get help with their papers, ask for a paper to see the doctor, or share a small decision like their readiness to begin the French course. 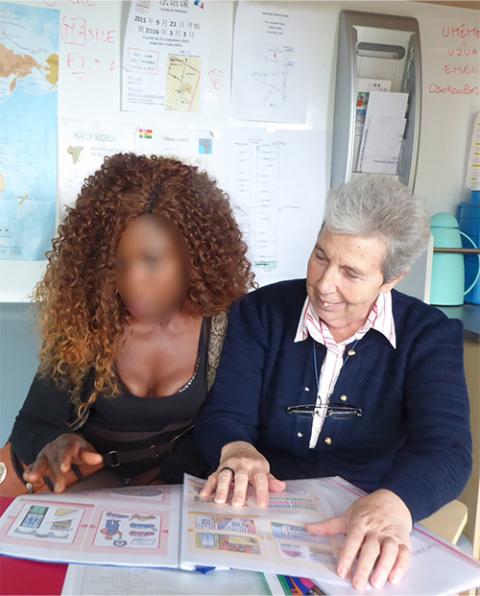 Praise (not her real name), left, and Sr. Begoña Iñarra in the "Liberation to Captives" truck in Bois de Vincennes, Paris (Courtesy of Begoña Iñarra)

We invited them to go on Thursdays to the Bakhita Center in Montmartre, where they could cook Nigerian food, enjoy a good meal and choose their activity: meet the social workers, take French lessons, take art therapy, computer classes, cooking, or just sit and chat. In my weekly seminars on being healthy, I used the Emotional Freedom Technique, which helped them a lot.

The time with the women was sacred to me. I saw Christ in them. Their faith, resilience, and energy of life encouraged me to continue fighting against human trafficking and accompanying them, even if at times it was hard.

The weekly meetings helped us to create bonds with some women. Then, we opened a little door toward freedom, evoking their dreams, their projects for life.

With some, we saw that coming out of prostitution was possible; for the minors, it was easier, as the police could take them to a protected place. But they all needed a lot of courage to get free from the psychological hook of the juju, the oath they had taken to keep silent, obey and pay the debt to the madame.

The decision to take the road to freedom depended on them. We just accompanied them on that hard road, as they faced loneliness, leaving the world they knew for an unknown world, in an unknown country. But quite a number overcame the difficulties!

I just got news from Joy, a Nigerian who after three years at the Vincennes Woods decided to come out of the life of prostitution. She overcame many difficulties. A refugee organization accepted her in its program, and she lived some months with a French family, got her asylum status, made friends, prepared for a job, and now she has her apartment and a steady job at a supermarket. She even feels ready to start a family.

As part of the team of RENATE (Religious in Europe Networking Against Trafficking and Exploitation) in France, I raised awareness in parishes, religious congregations, Catholic high schools and Christian groups — bringing to light what was hidden, aiming at potential clients and working toward a greater church involvement on fighting human trafficking. 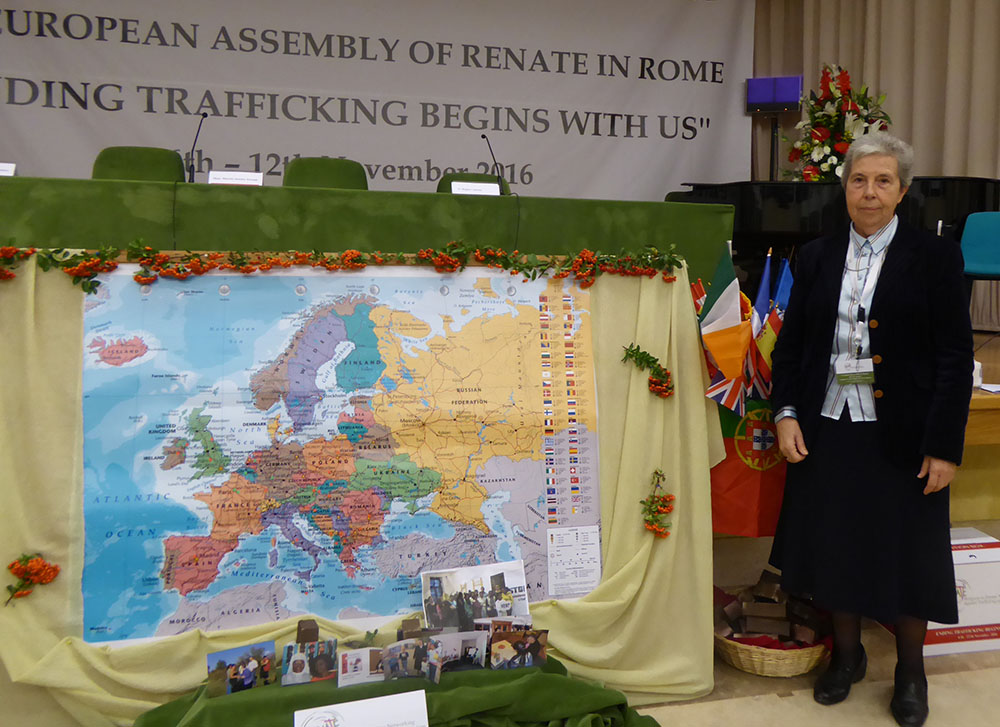 When my community, the Missionary Sisters of Our Lady of Africa (often called the White Sisters), closed our only community in Paris, I was sent to Madrid with the same mission, as fighting human trafficking is a priority in our congregation.

Being a member of RENATE, I knew some congregations accompanying formerly trafficked victims in Spain. I volunteered at the Security Hostel of the Hope Project run by the Adorers Sisters, to which women being exploited in Spain came from all over the world.

The hostel cares for their needs while they recover in body and spirit, learn Spanish, and prepare to rebuild their lives. After supper and washing up, we chat, play, watch TV, and have a few calm and joyful moments.

Some women express their joy at having all they need after their hard life. To see them overcoming the friction of daily life in common, with women from different cultures, countries and religions, challenges me to widen my own tent! They are not victims, but survivors and resilient women! What a joy being with them, even if it is not always easy!

Since the pandemic, all volunteers over 65 cannot go to the shelter, as we are at-risk persons. The same happened with the Project La Casa of the Oblates sisters where I gave computer lessons to a few women.

Some months ago, I was invited to participate in the new RENATE Law Enforcement Task Group relating to the survivors of human trafficking. We are 10 persons from seven nationalities, involved in fighting human trafficking in eight European countries. We aim at changing legislation and policies to provide adequate support and protection for the victims/survivors.

I started by researching the hostels in Spain for victims/survivors of human trafficking. There are many small organizations helping trafficked women, while very few look after men. That led us to the realization that many victims are not protected and have no compensation because of "holes" in the legal aid system and its implementation in European countries.

We focused our research on access to legal aid providers for victims/survivors, limiting our research to six European countries: Albania, Bulgaria, Germany, Romania, Spain and England /Wales. We advocate for better protection and legal compensation for survivors in all EU member states.

A university in England is conducting a study on legal aid for victims of trafficking across these countries. After disseminating it in June, the RENATE advocacy group will use it in the EU countries. We are excited about the study as there is little research on this area. We trust it will help us advocate for stronger legislation for survivors' protection. 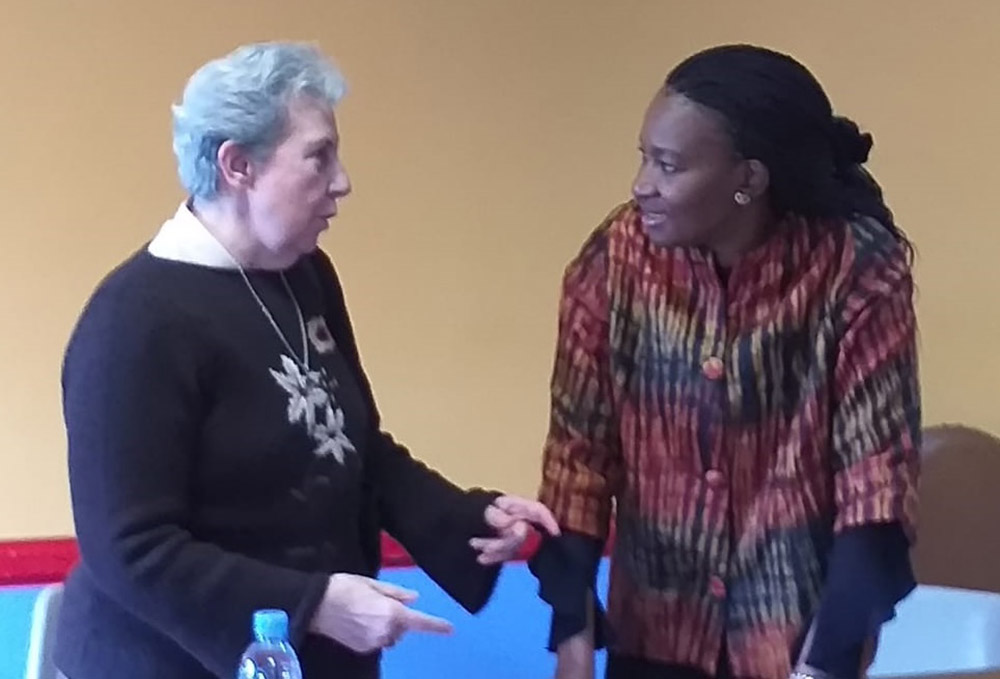 Sr. Begoña Iñarra with Nicole Ndongala, director of Karibu, at the association's general assembly in 2019 (Courtesy of Begoña Iñarra)

In the regional Madrid church anti-trafficking group of Catholic organizations, I invite other organizations working on this issue to join this group. I also approached Karibu, an association facilitating the integration of African migrants, where my congregation has worked since Karibu was established.

When Nicole Ndongala, an African woman who is Karibu's current director, came to the group, she shared the vulnerable situation of many women living in their refugee shelters. I felt a call to work with those women and offered my services to Nicole — now I go to one of their two shelters once a week to do activities with the women from both shelters. I am attentive to the potential victims of traffickers, and I show the volunteers the hidden reality of human trafficking, the signs of how to detect victims, and how to deal with them.

The more people know about the evil of human trafficking, the more will fight it, and it will become more difficult for traffickers to profit from it.

My commitment to these women is my way of living my Christian faith.

Read this next: Q & A with Sr. Begoña Iñarra, seeking anti-trafficking cooperation between Africa, Europe
This story appears in the Sustainable Development Goal 17: Partnerships for the Goals feature series. View the full series.