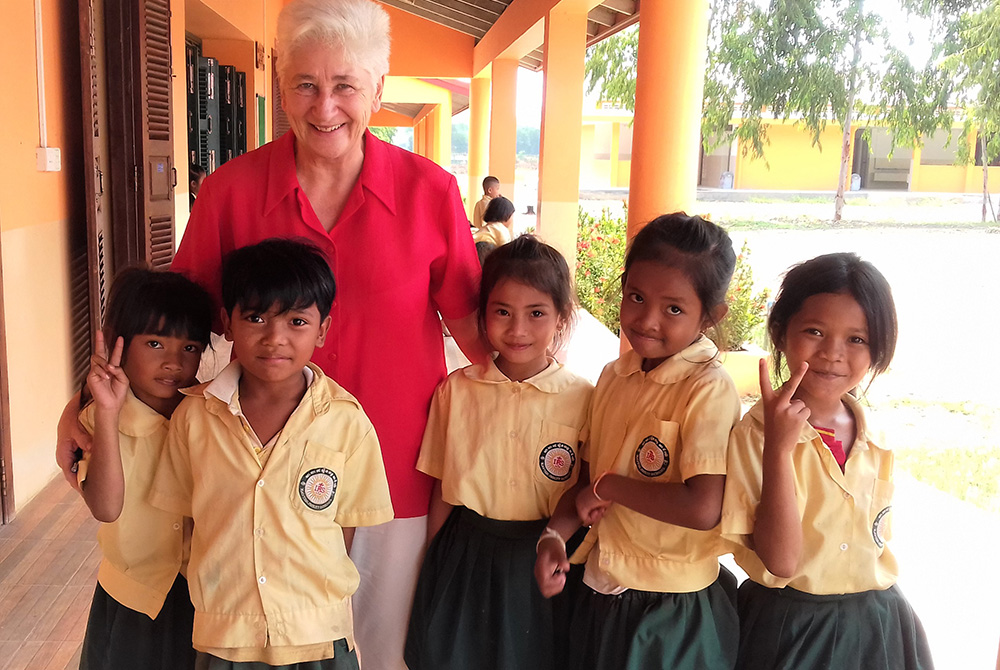 Presentation Sr. Anne Lyons at Xavier Jesuit School in Phnom Bak, Sisophon, Cambodia, where she worked between 2016 and 2019. (Courtesy of Anne Lyons)

Nano Nagle is one of the most widely recognized names in religion in Ireland. Now, she is the subject of a new booklet published by Messenger Publications, The Story of Nano Nagle: A Life Lived on the Razor's Edge, which is the work of Sr. Anne Lyons, who is herself a member of the Sisters of the Presentation of the Blessed Virgin Mary, the congregation Nagle founded in 18th century Ireland.

The booklet documents the story of Nagle, who was born into a wealthy family in 1718 but later left that life to live and work with people in poverty in the city of Cork. 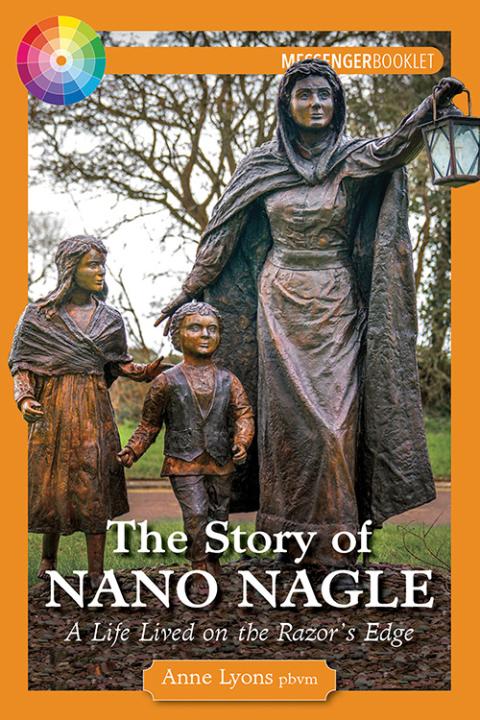 The cover of "The Story of Nano Nagle: Life Lived on the Razor's Edge" by Presentation Sr. Anne Lyons, which Messenger Books published this year (© Liam O'Connell)

Lyons has served in the ministries of education and spirituality with the Presentation Sisters in Ireland, the United States, Pakistan and Cambodia. Recently, her congregation delegated her as the postulator to promote the cause for the beatification of their foundress, whom Pope Francis declared venerable in 2013.

Known as "the lady of the lantern" for her intrepid seeking-out of people on the margins in the dark passageways of Cork, Nagle was voted Ireland's greatest woman in 2005 in a competition run by RTÉ, Ireland's national broadcaster.

She originally brought the Ursuline Sisters from France to Ireland and built a convent for them in 1771 with her inheritance. However, enclosure prevented the Ursulines from meeting the educational needs of those in poverty. So in 1775, Nagle and three others founded a new order promising poverty, chastity and obedience to God without enclosure, enabling them to focus on educating children deprived of schooling because of their poverty and Catholicism.

Lyons said Nagle faced persecution and hardship both as a woman and a Catholic, but she was driven by a passion to help Christ's marginalized.

"In the centuries since her death in 1784, her message of courage and hope has traveled around the world, changing the lives of the poor and forgotten," Lyons said.

Today, Presentation Sisters work in 24 countries and operate a network of schools that carry on the vision of Nano Nagle.

GSR: Was Venerable Nano Nagle instrumental in your vocation as a Presentation Sister? 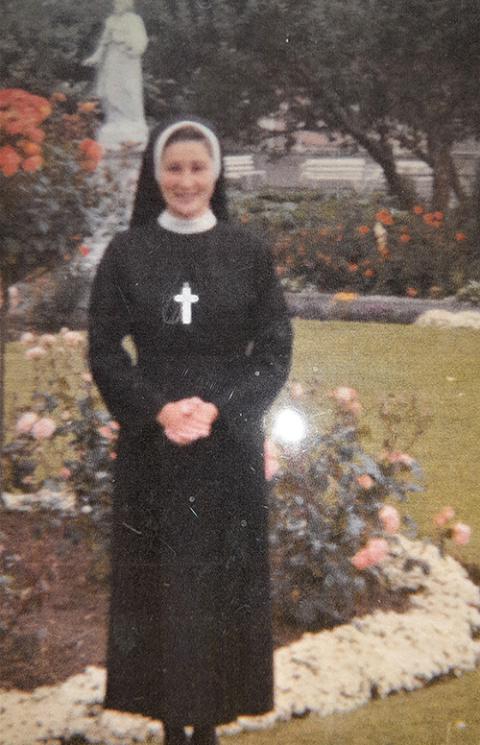 Presentation Sr. Anne Lyons on the day of her first profession in 1973 at the Presentation Convent in Thurles, County Tipperary, Ireland (Courtesy of Anne Lyons)

I was born July 30, 1952, the second in a family of five girls and two boys. I was educated at Presentation Thurles between 1956 and 1970. On Oct. 15, 1970 — the feast of Teresa of Ávila — I joined the Presentation Sisters. My initial formation years took place in Thurles, also. At that time, we were quite monastic, the very thing Nano Nagle never wanted.

At school and during my novitiate years in Thurles, a picture of Nano commissioned for the first anniversary of her death hung in a prominent place. It was the standard picture of Nano seen in every Presentation convent, no matter where you went in the world. But my initial formation made little reference to Nano. This changed with the bicentenary of the Presentation Sisters in 1975.

As a Presentation pupil and a young sister, I noted that there were always women who, despite the constraints of the institutional style of religious life at that time, were "Nano people." Vatican II challenged religious to return to our roots, go back to the Gospel, go back to our foundress — and so began the great return.

Today, you are tasked with promoting her cause. To what extent has Venerable Nano Nagle influenced your life as a Presentation Sister?

Nano's words — "If I could be of service in saving souls in any part of the globe, I would gladly do all in my power" — are a driving force in my life.

Nano had a global vision from the get-go. The Story of Nano Nagle: Life Lived on the Razor's Edge has one purpose: to make Nano known and loved. Her life is a powerful witness. She as a laywoman listened keenly to the call of God and responded with amazing courage and daring. She did not just bind up the wounds of her time, but through establishing schools for the education of the poor, put a spoke in the wheel of systemic injustice.

Where has Nano's charism led you?

I have a strong sense that divine providence works in my life. I have repeatedly noted that saying yes to God has led me to live and encounter people, places and cultures I could never have imagined. The journeys began in Ireland, but I heard that repeated call to be of service, and I responded on each occasion.

After my profession and teacher training, I taught in our school in Fethard, County Tipperary. In 1980, I was appointed principal, but within 36 hours after accepting that role, I was asked to go instead to Alabama in the United States. I was 28. 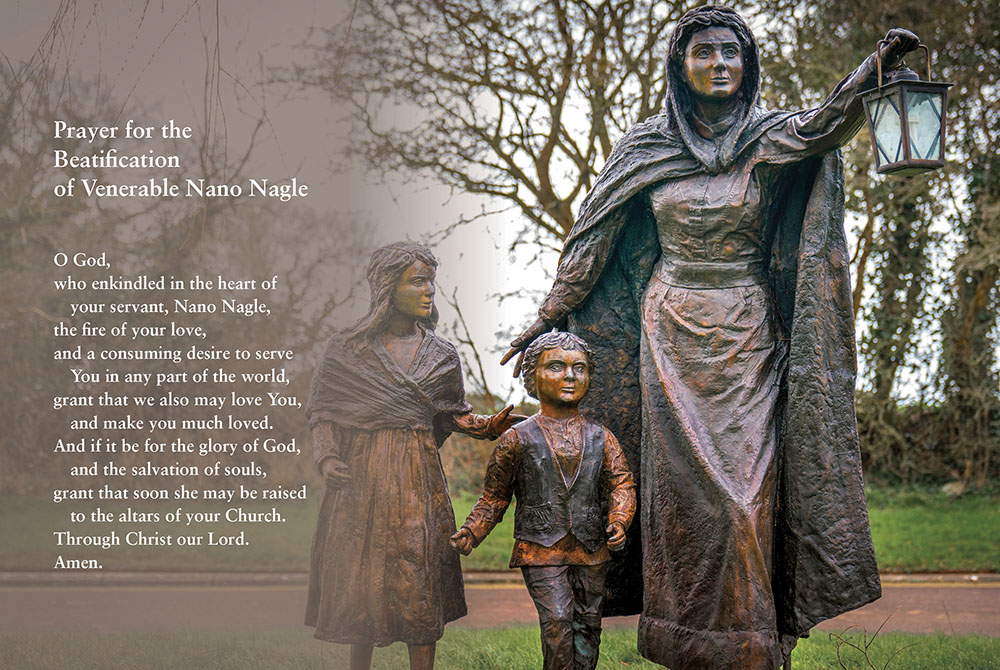 Prayer for the canonization of Nano Nagle with sculpture by Annette McCormack, located at Nano's birthplace in Ballygriffin, County Cork (© Liam O'Connell and Messenger Publications.ie)

I taught in St. Joseph's in Birmingham, Alabama, for three years. Our whole neighborhood was Black. Our school policy was one of openness and inclusion; however, in my time, there were only two Black children in the school. I could see the challenges even then.

After Alabama, I returned to Waterford in Ireland. It was a period marked by collaboration between the school, parish and the community. Alongside my teaching career, another career opened up in the area of spiritual accompaniment and giving retreats. 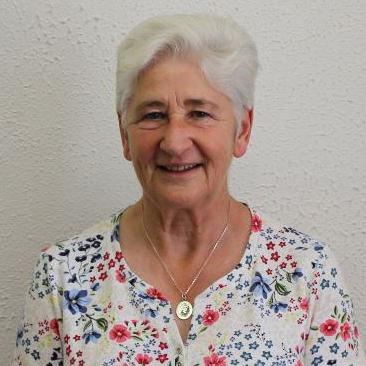 Following a period of study in theology and spirituality in the Milltown Institute of Theology and Philosophy in Dublin and a course in formation for leadership, I was appointed leader of our community in Cashel for three years.

In 1996, I responded to a call to go to Pakistan. This was a defining moment in my story. In Pakistan, I was getting out to the villages and trying to be among the people with my little bit of Urdu. Unfortunately, I got a parasite and had to return to Ireland. That decision to return was where I noted the providence of God was at work in my life despite the darkness and disappointment of returning. God journeys with you in the dark places. The darkness is especially the place where the greatest growth or transformation can occur.

I was assigned in 1997 to work in full-time retreat ministry with the Missionaries of the Sacred Heart in Grace Dieu retreat center in Waterford. They were seven very enriching years during which I continued my studies in pastoral theology and supervisory practice. When I finished in 2004, I studied for two years and completed my master's in Christian spirituality.

There were two further requests to return to Pakistan, one short-term and the other in 2006 to take up the role principal of a large school in Swat, on the north frontier of Pakistan, where the spoken language is Pashto. 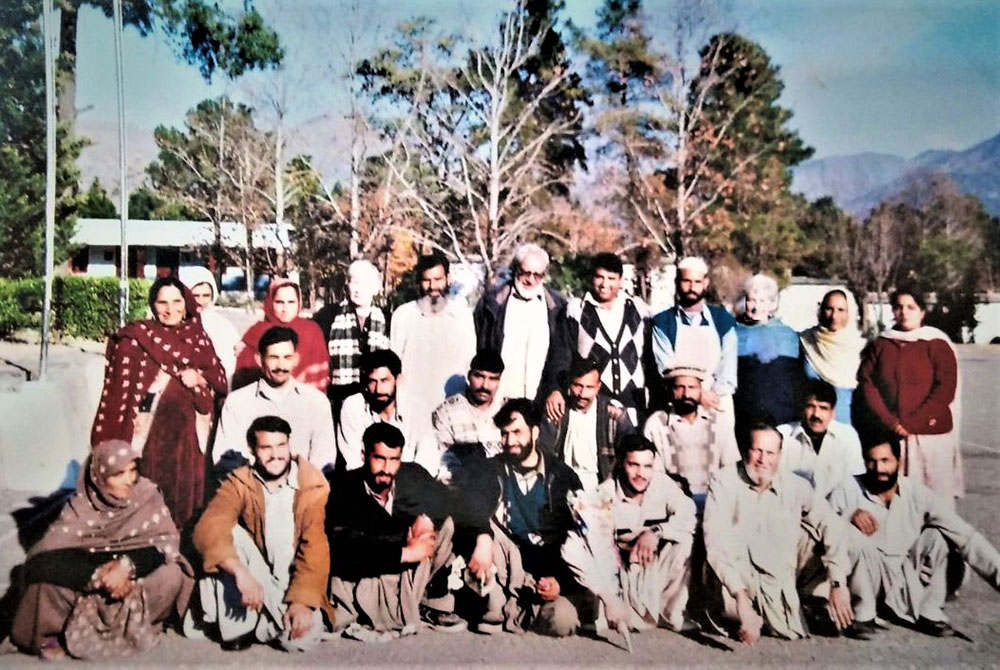 The staff of the 1,000-student public school Sangota in Swat, on the northwest frontier of Pakistan, where Presentation Sr. Anne Lyons held the role of principal for a brief period in 2006 (Courtesy of Anne Lyons)

After Pakistan, you found yourself back in Nano Nagle's birthplace in Ballygriffin, Mallow, County Cork. Was that where your overseas mission work ended and your promotion of Nano began?

I worked at the birthplace of Nano Nagle from 2008 to 2011. We had a center for spirituality, heritage and ecology. It was here that the love affair with Nano deepened. I found myself asking her to help me get under her skin, to understand what made her tick, and what she was asking of us today. 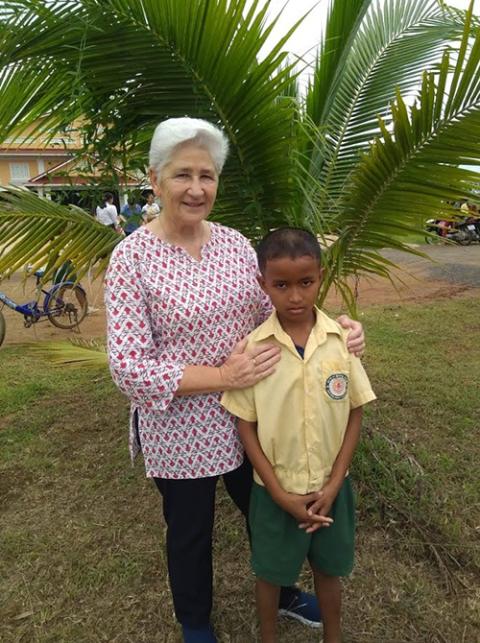 Presentation Sr. Anne Lyons with Rotha, a third-grade student being raised by his grandfather and great-grandmother, on the final day of the school year at Xavier Jesuit School in Phnom Bak, Sisophon, Cambodia, in August 2019 (Courtesy of Anne Lyons)

Then, in 2016, with two other Presentation Sisters, we responded to an invitation from the Jesuits to work in collaboration with them in Cambodia. They had discerned the need for a new model of education and had built a new school in Sisophon, Cambodia. There, we as educators played a significant role in positions of leadership both in the primary and high schools, alongside helping to put in place policies and procedures for the school and hostel. We also helped in the formation of the teachers.

Your plan to take a sabbatical in San Antonio, Texas, last year was thwarted by the COVID-19 lockdown, and instead, you found yourself appointed as postulator for Nano Nagle. What has that entailed?

My brief is to continue to make Nano Nagle known and to promote devotion to her cause for beatification and canonization. Presently, I'm a postulator designate. I am studying Italian, and I'm required to complete a Studium course [a two-month course for postulators of sainthood causes at the Pontifical Urban University in Rome] and an exam for postulators. The course covers areas relevant to the role of postulator and on the process of sainthood.

I began studies in Italian in September [2020] in Rome. I was living with the Congregation of the Sisters of Santa Dorotea della Frassinetti. I came back to Ireland at Christmas, and I was due back in January, but to date have been unable to return because of COVID-19 restrictions. So I've continued my language studies online while promoting Nano and the booklet.

Canonically, a miracle that defies medical explanation is required for beatification. So the role involves the recording of favors.

What are your hopes for the booklet?

My hope is that the booklet will be like a torch, fanning the flame of Nano Nagle. People are convinced of the holiness of this woman. Pope Francis obviously is.

In her day, Nano was a pioneering woman of great courage, faith and hope as well as a risk-taker. My hope is that the booklet offers a fresh approach to this woman not as somebody back in history, but as somebody whose spirit is alive and who can inspire men and women today in their Christian call.