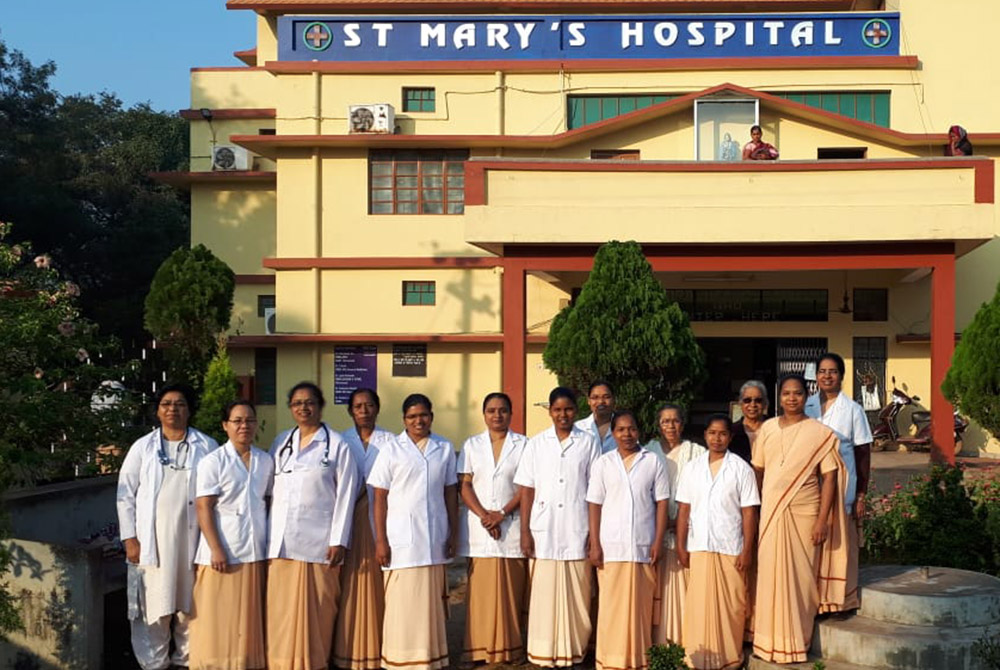 Handmaids of Mary Sisters are pictured outside St. Mary's Hospital in Jharsuguda, Odisha, India. The sisters serve at the hospital, and have continued their work during the pandemic. (Provided photo)

While the world is gripped with the COVID-19 pandemic, our inner eyes are opening to the good old pre-COVID days. In spite of the spike in daily cases, in many places, life is crawling back to routine. From those initial, fearsome days until now, there have been groups of people who stand as the foremost warriors against the coronavirus. Among them are the medical personnel, who deserve a million accolades.

The doctors, nurses, paramedicals and health volunteers are sweating out their days in personal protective equipment with goodwill, to save lives. They are professionals; but no money can repay them for the agony that they go through while on duty. The ethics of their profession demands a lot from them.

Remembering all the medical professionals with awe, I think of another set of people who dedicate their service without counting the benefits they receive — the religious nuns! Nuns are the easy victims of fanatic ideologies in India. They have faced fake allegations, arrests and personal attacks. Their institutions were vandalized, and their selfless services were dismissed as religious "conversion activities." Even their personal morals and identities are maligned, due to a few incidents.

Recently, Pushpa Mission Hospital, managed by the Diocese of Ujjain, in Madhya Pradesh, was attacked by antisocial elements backed by political influence. A huge mob of people rushed in with weapons and vandalized the property, creating a lot of fear and inconveniences for the administration and staff. The hospital is a blessing for hundreds of poor patients who would otherwise forfeit quality medical service. Ujjain has been a COVID-19 hotspot since the initial days of the pandemic. Amid the surging number of COVID-19 cases, the sisters and the staff are rendering unceasing service. There is no doubt that, among those who had come to attack with sticks and stones, some also have received the healing care of the sisters! 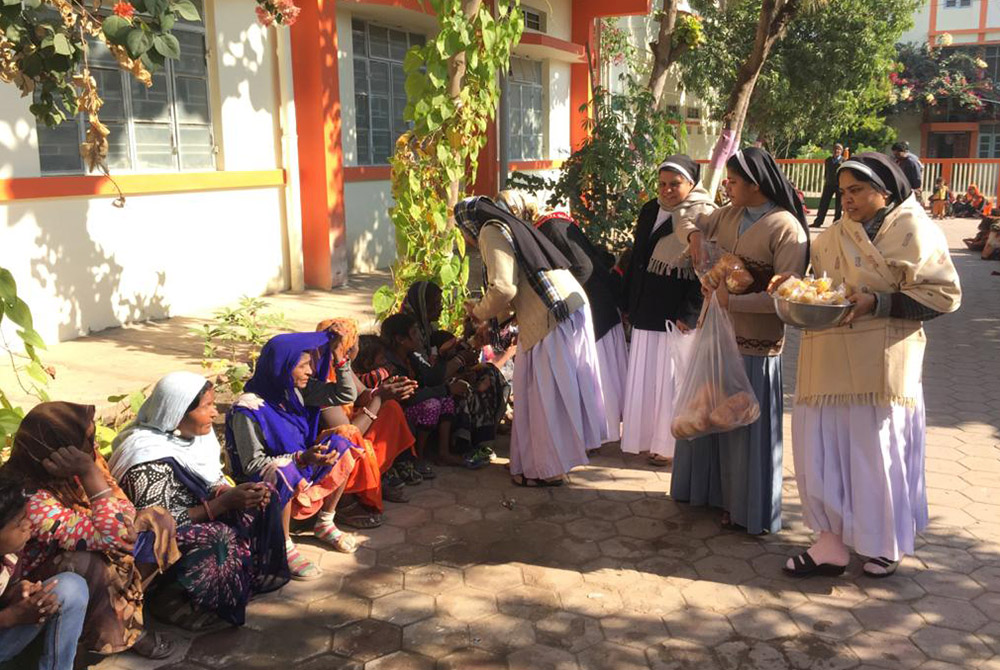 The church in Kerala has enough black marks against it. Nuns are accused indiscriminately on social media. They are called names and abusive terms. There is "trial by media" and everyone — even those who have no idea about religious life — pour in suggestions on how to improve life within the convents. Even in the movies, nuns are portrayed negatively.

Yet nothing can hide the real essence of religious sisters who are called for the service of God and humanity. There is a rehabilitation center for orphans and the destitute in Kerala, called Karunalayam, managed by the The Congregation of the Sisters of the Destitute. In the month of July, when the coronavirus was still just a scary disease, a positive case of COVID-19 was detected among the patients. Given the kind of patients they care for, they needed more caretakers. When help was called for, without a second thought, sisters, priests and brothers from nearby places jumped into action. With the utmost care and service, in less than a month's time, the pandemic was brought under control and no new cases were reported after that. This noble action did not call forth many accolades in social media. After all, it is just the duty of the charitable centers to care for the poor and the destitute.

Odisha — formerly known as Orissa — has witnessed a number of persecutions in the name of conversion. The "Kandhamal riots" of 2008 are still fresh in the memory of every Christian. Fr. Arul Doss, a young priest, was killed with bow and arrows over an allegation of religious "conversion" in 1999. In the same year, Graham Staines, an Australian missionary who worked among leprosy patients, and his two sons were burned to death over false accusations of religious conversions. Although recurring attacks and allegations do create fear, they never stop religious men and women from serving humanity in the name of the Lord.

Jyothi Hospital, run by the Diocese of Balasore, Odisha, is close to the place where Fr. Arul Doss and Staines were martyred. The hospital serves as an official COVID-19 care hospital. And some of the best service has been rendered when sisters from different congregations have pitched in as needed. The sisters do not discriminate against anyone who comes there.

Sister Suma of the Sisters of the Destitute, who is the hospital's nursing superintendent, recalls the past months with gratitude. In the initial days, there were only three to four sisters, along with other staff in the hospital. She says that there was much fear of death in those first days, although it didn't last long. Prayers were a huge strength. They frequently experienced divine intervention; when they were running short of staff, there would be someone who showed up to help. Realizing the need for more personnel, here again, sisters from other congregations generously volunteered their help.

Sister Suma said that the phrase "missionary zeal" was echoing in her mind. They had to handle many adverse situations. There were instances when a patient died, and there would be a crowd sitting with placards and accusing the administration. "It was their ignorance and helplessness," Sister Suma said.

Looking back at those incredible days of rushing, fear and anxiety, she said, now it all looks as if a flood has come and gone. Life has adjusted with the situation. "To be a missionary, one need not be located in the frontier regions; but dedicating oneself to the given situation wholeheartedly is the mission," she said.

Humanity takes precedence over religion. St. Mary's Hospital in Jharsuguda, Odisha, is another example of service beyond hurt feelings. It is managed by the congregation of the Handmaids of Mary. One of their sisters was brutally attacked during the Kandhamal riots. There are a number of sisters engaged in the medical profession, rendering their service to society; the sister who was the victim is at the forefront of those reaching out in total loving service.

Sr. Aniamma Kurian, a physician at St. Mary's Hospital, expressed her contentment of her service as a doctor. Her words were full of courage and conviction when she said: "This is the time when patients need us more, so my mind doesn't allow me to stay away to safeguard my life. If I do not avail, where else they will go?" Sister Aniamma herself contracted the disease and was under treatment. Realizing the need of the hour, she has resumed her service, even though her health has not yet recuperated completely.

Such stories of valor are numerous. There are outstanding individuals who showed bravery in fighting the pandemic. Holy Spirit Sr. Sneha Joseph, an administrator of Holy Spirit Hospital in Mumbai, has donated plasma four times after recovering from the coronavirus.

Related: Holy Spirit sister who survived COVID-19 donates plasma to save others

And so go the stories. It's easy to keep track of the negative stories, because they are few in number and seem to be celebrated as the lapses of religious life. But the selfless and often unrewarded service of these consecrated people go unnoticed, because this is what they live every day.

Time and again, religious people face obstacles on the way. Even when society yells at them saying, "It's useless being a nun, and convents are places of human rights violations," time always proves otherwise. We still have a major role to play in society. Religious life will keep on caring, educating and praying for others, often in much higher ways than anybody else would do.