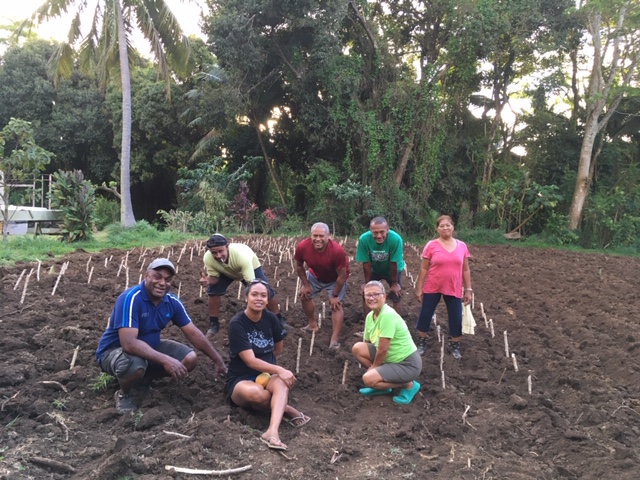 The Cook Islands is a small Pacific nation consisting of 15 islands scattered over 850,00 square miles of ocean. It has had self-governing political status since 1965 with special ties with New Zealand. There are 17,500 people, the majority of whom are Christians — with Catholics numbering approximately 2,000 people.

There are no COVID-19 cases in the Cook Islands as of Dec. 9, but the nation has acted quickly and prepared as though we could be infected by the virus anytime. The global pandemic has had great economic, social, cultural, mental and environmental impact on us, with both positive and negative results. The change calls for a review in how our systems work, what we consider to be important in life, how we view our neighbor and even how we conduct some of our church services.

At the beginning of the pandemic, our schools closed; the health department reorganized the way it provided health care; Internal Affairs did the same thing for employers and employees; our borders were closed to tourists; we were not allowed to gather in groups larger than 10; there were no church services, and our Masses were either live-streamed or televised. We gathered in small groups at home and took part in the Easter services via televised Mass. We maintained social distancing, washed our hands frequently, and queued up at spaced intervals at the supermarket that only admitted a limited number of people at a time. Visits outside our small groups were discouraged, and the orange flags placed outside the homes of those who were over 70 meant that no visitors were allowed.

When restrictions were gradually eased, we could once again gather at church services, but had to keep 2 metres apart, and until only recently, no congregational singing was allowed except for the choir, confined to a designated area. We are discouraged from holding hands, or greeting each other with hugs or handshakes in church or outside, which is something we do naturally.

The economy — which relies a lot on the tourism industry — is in jeopardy. In response to the economic downturn, the government, following the example of New Zealand, started paying out wage subsidies to employees whose employers had registered for the subsidy. This help was to end at the end of September but has been reviewed and extended to December. This means that whatever reserves the government holds have been diverted to supporting both businesses suffering some loss and their employees. It is to their credit that all foreign workers can receive the subsidy as well as Cook Islanders. If the border restrictions from New Zealand continue beyond December, it may be that many foreign workers will have to be repatriated.

Many of these workers have come from the Philippines, Fiji and Indonesia. Some have had to accept job losses or have shortened work hours. I have also heard of some families who have had to budget carefully because income is limited.

However, apart from the stress of uncertainty for some, especially those mainly in the tourism industry, there have been many positive results coming out of this pandemic.

One positive outcome is a change of attitude. There is greater awareness of the environment, which is been given a breather in the absence of visitors. There is less pollution in the lagoons and fewer cars on the road than normal.

Cook Islands people are known for their generosity. After all, our islands are bountiful. The earth yields good vegetables and fruit, and there is still plenty of fish in the sea. Many people are also going back to basics with planting and fishing and not just relying on tourists. Homegrown vegetables and fruit are being sold cheaply at the markets, and most people have food to eat. 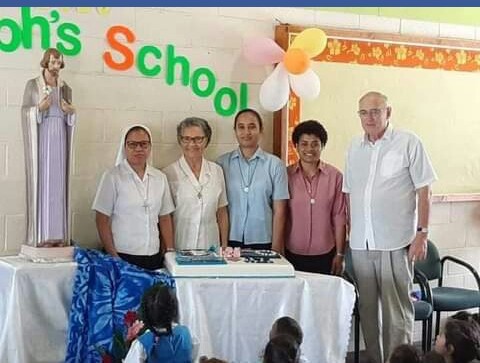 Cluny Sisters, from left, with Bishop Paul Donoghue of New Zealand at the 125th anniversary celebration of St. Joseph's School: Sr. Luisa Nava, from the Philippines, Sr. Elizabeth Browne-Russell, from Rarotonga, Sr. Anamaria Irava, a novice from Rotuma, and Sr. Vaviola Babakula, a novice from Fiji. Not pictured is Sr. Teresa Momoyalewa, who died in June. (Provided photo)

Landowners have allowed foreign groups to use their land to plant and harvest food for themselves. Some owners of rental properties have either waived the rent for some, or decreased the amount according to the ability of people to pay. The electricity company and internet and phone provider did the same thing.

In general, the pandemic has brought people closer together. With shortened hours of work for some people, there has been more time to be with their families.

Historically, the London Missionary Society first brought the Christian faith to the Cook Islands in 1821. Catholic missionaries from Tahiti followed in 1894, and six months later, The Sisters of St Joseph of Cluny arrived to start St Joseph's Catholic Primary school in Rarotonga in 1895. We recently celebrated the 125th jubilee of the school.

The sisters work closely with the Catholic community on the main island of Rarotonga, which consists of 4 parishes, one primary school and one secondary school. We help in reaching out to those in need, by being involved in the school, by pastoral work, by visits to the elderly and others in need, by advocating with the Ministry of Internal Affairs on behalf of those who feel they are being unjustly treated at their place of work, or who do not know how to seek help because of language barriers. We also offer administrative services to the diocese as required.

Our generous people bring us large quantities of food, which we distribute to families who appreciate the extra help. Our bishop, Paul Donoghue, a Marist, has set up a special fund to help those in need, and some people have already started to contribute to it.

We are very grateful that when one of our sisters, Sr. Teresa Momoyalewa, died of cancer in June, the lockdown had lifted enough for the Catholic community and beyond to allow us to give a very fitting and beautiful farewell to one who had served the church community here so faithfully for the last 26 years of her life.

Despite the uncertainly of our times and the desire of many to have our borders opened sooner rather than later in order for tourists to return, we are truly blessed to be living in a country that is generous, bountiful, mindful of the stranger among us, and living in a time of transition. What the future might look like for the Cook Islands is still unknown. What is certain is that there is no going back to the "old" normal when and if this pandemic is over.

[Elizabeth Browne-Russell is a Sister of St. Joseph of Cluny from New Zealand. After entering the congregation in Auckland, she taught at both primary and secondary school levels in New Zealand, Fiji, the Cook Islands and the Philippines. With an academic background in education, she also has credentials in music, religious education and spiritual direction. For 10 years, she was provincial leader of the Cluny Sisters. Presently she is community leader, doing general administrative work for the convent and diocese, and care-giving for her 100-year-old mother.]