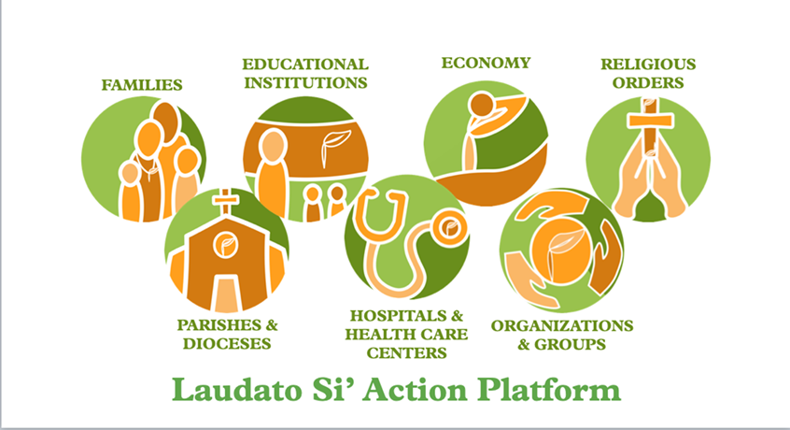 Religious communities are at the forefront of the transition to a more sustainable world but must continue to set an example and expand their efforts, sister advocates said during a June 9 online gathering.

"We're stepping up to be in a prophetic role," said Sr. Sheila Kinsey, who heads the Sowing Hope for the Planet campaign for the International Union of Superiors General, the global organization that represents the majority of the world's 600,000 sisters.

That work entails challenges and new ways of thinking, said Kinsey, a member of the Franciscan Sisters, Daughters of the Sacred Hearts of Jesus and Mary. 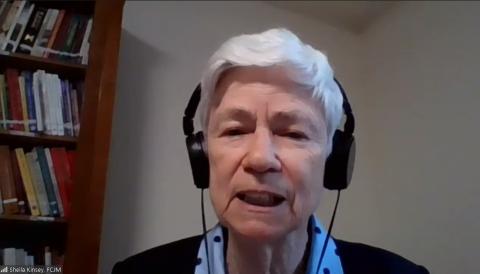 Sr. Sheila Kinsey, who heads the Sowing Hope for the Planet campaign for the International Union of Superiors General, moderates a June 9 webinar, "Moving Forward with the Laudato Si' Action Platform," which was hosted by UISG and attended by approximately 300 participants. (Courtesy of UISG)

"This is the new frontier for religious," said Kinsey, who moderated the webinar, "Moving Forward with the Laudato Si' Action Platform," which was hosted by UISG and attended by approximately 300 participants.

The event was part update and part pep talk.

The update was a chance for Kinsey and others to brief congregations on efforts to actualize the goals of Pope Francis' 2015 encyclical, "Laudato Si', on Care for Our Common Home."

The Vatican held a Laudato Si' anniversary year from May 2020 to May 2021 to celebrate the encyclical's fifth anniversary, and last month, the Vatican's Dicastery for Promoting Integral Human Development introduced the Laudato Si' Action Platform.

The platform is an initiative focusing on seven churchwide sustainability goals that include adopting renewable energy and simpler lifestyles; promoting ecological education and spirituality; achieving carbon neutrality; and adhering to ethical investment guidelines.

During the webinar, Kinsey emphasized the need for congregations to make initial commitments to the goals and to learn from each other, saying that some congregations are just joining efforts while others have a long record of environmental consciousness and activism.

Wherever congregations are in the process, it is important to make some sort of commitment and work from there, she said, adding, "We're all in this together."

Several participants noted that a key step for congregations is to declare their commitment to the Laudato Si' Action Platform goals and, more broadly, to the healing of the Earth.

"Our common context is human life, the Earth, the universe," said webinar participant Sr. Dulce Corazon Velasco, a Philippine Medical Mission sister, who noted her congregation's commitment to the platform goals given its mission to heal people and communities. "Concerning our specific mission, we respond to the cry of the Earth and of the poor."

Another participant, Sr. Winifred Doherty, who represents the Congregation of Our Lady of Charity of the Good Shepherd at the United Nations, said her denomination has developed public position papers on six issues that include integral ecology and views the problems as interrelated.

The issues of climate and ecology, she said, all relate to the other challenges — such as economic injustice, human trafficking and migration — in some way and must be viewed holistically, she said.

"We realize that ecological degradation and suffering of peoples and life forms across the globe are entwined; they are one phenomenon," Doherty said, quoting from a recent reflection paper.

Doherty noted that the papers, developed by her predecessor at the United Nations, Sr. Clare Nolan, came from congregational discernment and experience on the various issues.

On the environment paper, specifically, Doherty said, "our sisters and partners in mission have known deeply and tangibly within themselves from their direct experiences on the ground, at the grassroots, with those who suffer from environmental degradation."

She said the reality of environmental justice is undergirded by social, political and spiritual awareness.

"There exists a particular responsibility on us to join the movement of humanity toward ecological justice and responsibility and to keep it as a priority in the expression of our mission," Doherty said.

Others participating in the webinar included Br. Alberto Parise, a Comboni missionary who coordinates Sowing Hope for the Planet for male religious and works with Kinsey.

Kinsey said as of June 10, the Sowing Hope campaign currently has 1,309 subscribers to its newsletter, an increase from the 1,000 she reported in April.

Read this next: Q & A with Sr. Sheila Kinsey, advocating for Earth through Sowing Hope for the Planet