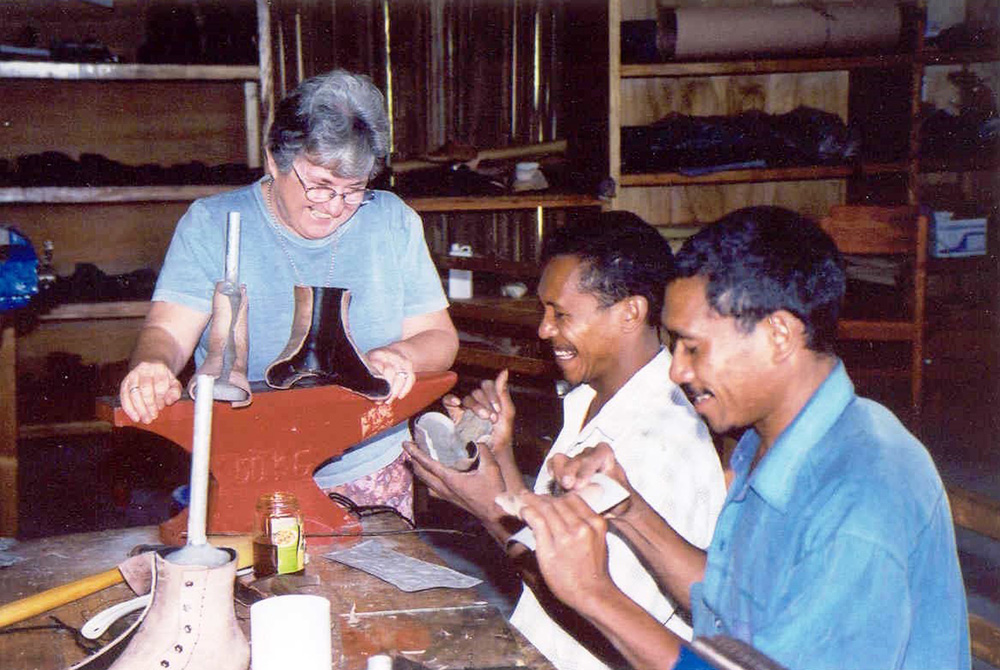 Arriving in Timor Leste (or East Timor) from Indonesia in February 1991, we five Maryknoll sisters had to settle in, assess needs and build a house, since we were the first sisters in the parish of Aileu, which had not been a parish for long. Sr. Dorothy McGowan and I chose to assess the health field — initially thinking about nutrition.

Sitting on the veranda of our church on the hill, we envisioned the far-flung villages and knew that we needed a community-based approach; the parish covered two of the four subdistricts of the Aileu District, with 16 mountain villages. We began offering our own courses, using local health professionals.

We invited three or four people from each village to become "health motivators," and got funds to build a small clinic on the church lawn — this would be our center for outreach as well as serving those living nearby. The motivators were to be our "eyes and ears" and were to report at monthly meetings.

A friend working with the Helen Keller Foundation came for a visit, and we set up examinations for blindness or eye damage. These examinations gave our motivators new skills, and resulted in me taking one little girl to Jakarta for surgery.

One day, walking over to the market, I spotted a boy up in a tree, who was about 10 years old and had survived polio. His mother had reported him to the Social Welfare Department but to no avail. For the boy and the girl, I used our contacts in Indonesia; through this experience I knew we just had to continue to find resources to help our communities, no matter what the problems were. So, we began physical rehabilitation work without realizing it.

I was in the capital, Dili, having lunch with two nurses of The Leprosy Mission, when one of them, Philippa, asked me if we had any people with physical disabilities up in Aileu. On my return, I asked our motivators at their meeting. When I reported the large number to Philippa, she said that with such a large group, it would be better if Dr. John Hargrave go up there to examine them. He came and that was how the program began!

Dr. Hargrave's first day found Sister Dorothy and me plus 70 people with physical disabilities — each with a family member and a village health motivator. After hours of initial examinations, John finished the list of next steps for each patient that we should do before we before his visit the next month from Australia.

As the program got started, John pointed out the need for post-surgical physical therapy, shoemaking for braces and prostheses to help patients to improve their mobility, and other special needs. As he sometimes had the surgeries for patients at the hospital of the Precious Blood sisters in Cancar on the island of Flores, we sent a nurse and a talented health motivator over to that hospital for rehab training.

Back in Aileu, we had to find funds and build a rehab workshop for the manufacture of all the special things required: shoes, casts and later even tricycles as mountain folks had no transportation.

Meanwhile, we invited one nurse from each of the four subdistricts to run the program and be the link to patients in their area. By this time, we had use of the Centro Clinic in Dili — for surgeries and some first examinations, with good opportunities for training; the Cancar hospital in Flores was for some surgery and specialized training like shoemaking and woodworking; a hospital in Java and even some sites in Australia for very specialized surgeries — thanks to John's connections.

There were some wonderful stories of success! A preteen girl in a remote village was missing half her chin from a childhood infection. At John's recommendation we sent her to Australia, where plastic surgeon Dr. Mark Moore did a fine job. Upon return she needed speech therapy — luckily we had sent one of the clinic staff for speech therapy training in Java.

Another patient is etched in my memory. I spotted him in church one Sunday morning with a mask covering his mouth. Intrigued, I asked him the reason for the mask. His answer was muffled and he did not remove the mask, so I invited him to our next meeting with Dr. John. Now, maybe I would be able to see under the mask! But the examination happened too quick for me to see. John referred him to Australia, and he needed a passport photo. "Here's my chance," I thought, "I'll ask for two photos!" (But by then I knew that he had been shot through his cheeks.) After surgery he got a job as a teacher and is now maskless. But we still have no photo — the clinic was burned to the ground in 1999.

Philippa brought us up to another town, Baucau, where we started with her leprosy patients. Then various sisters invited us to help in their places. By this time, the program served the whole country, except the western section. Up to this time we were not allowed to use the National Hospital in Dili.

There was great upheaval in the late '90s; one of our clinic patients was imprisoned and tortured. Tensions continued to rise, with Indonesia taking total control in Dili and an unofficial curfew in place. It was then that we were suddenly allowed to have surgery in the National Hospital. For the most part, things went smoothly until one day, a young boy died on the operating table, after the completion of his surgery. About this time, patients scheduled for surgery began to simply refuse, thinking it was unsafe. But the program then was put on hold until after the bloody takeover attempt by Indonesia resulted in freedom for East Timor in September 1999.

Now, in freedom, we began our rehabilitation ministry again. This time with Dr. Mark Moore, but with no connections outside of East Timor. We rebuilt our workshop, which had been burned to the ground, gathered our team and carried on. At one point we were asked to examine a whole group of guerilla leaders now based in our town. These men had all been shot during the struggle. John and I went to the government clinic where he did X-rays. Only one of the group was advised to have surgery. The others were told the bullets in them were best left alone.

I was saddened to hear about Dr. John Hargrave's death in 2020, but it brought back good memories about the days our community started a ministry "from scratch" in Timor Leste.