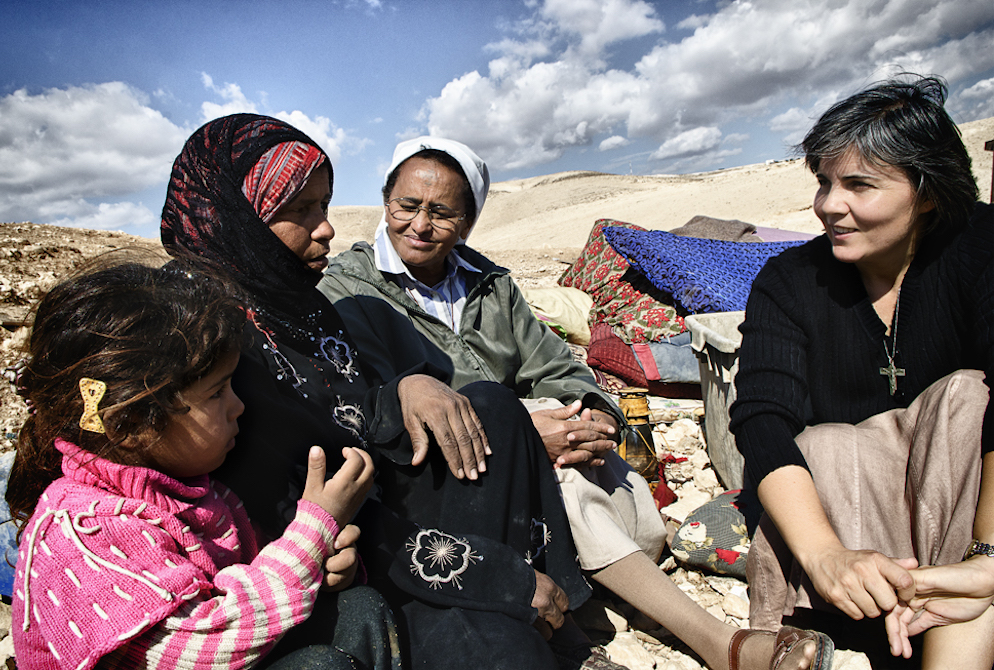 Comboni Sr. Alicia Vacas Moro, a Spanish missionary whose ministry has focused on humanitarian needs in the Middle East, is one of 14 women receiving this year's International Women of Courage award, an annual honor by the U.S. Department of State.

Vacas, 49, a registered nurse and regional coordinator for the Comboni Missionary Sisters in the Middle East, was honored for work that includes establishing a medical clinic in Egypt for low-income patients and a ministry working with an impoverished Bedouin community on the Israeli-occupied West Bank.

She and the other award recipients were honored today March 8, International Women's Day, in a virtual ceremony live-streamed from the State Department in Washington, D.C., and attended by first lady Dr. Jill Biden, Secretary of State Antony Blinken, and Linda Thomas-Greenfield, the U.S. Ambassador to the United Nations.

The public citation for Vacas noted that she established a training program for Bedouin women that opened up new economic opportunities for them and also established kindergarten programs in Bedouin camps that provided "an educational foundation for children."

"In an environment shaped by the Israeli-Palestinian conflict, Sister Alicia also assisted traumatized refugees and asylum seekers, a job she continues to perform on a larger scale in her current role as the regional coordinator for the Comboni Sisters in the Middle East."

The citation also noted that when the global coronavirus pandemic struck northern Italy in early 2020, Vacas "flew to Italy to assist and treat fellow sister nuns, undeterred by extreme danger to herself."

In an interview with GSR prior to the award ceremony, Vacas said the award "is somewhat of a surprise because there are so many women out there doing wonderful things."

She said, for example, Comboni sisters in South Sudan might be more deserving of the honor because of their challenging work in assisting displaced persons in that country's ongoing civil war.

Vacas views the award as a collective honor for her and the five other Comboni sisters working in the West Bank, as they try to honor Gospel values in an environment she described as uncommonly difficult.

"Sometimes an award is really about a larger community, so I share this with others," she said.

Vacas worked in Egypt between 1999 and 2007, and has worked in Israel/Palestine since 2008, except for a two-year stint from 2015 to 2017 in Verona, Italy, when she coordinated an infirmary for older sisters. Vacas was elected regional Mideast coordinator in 2017.

The Comboni community is based in a convent in the West Bank community of Bethany, just outside of Jerusalem, but is surrounded on three sides by an Israeli-built separation wall, a barrier constructed in 2004 in the wake of Palestinian uprisings.

"It's an uncomfortable place to be, but it's a place we've come to believe where we need to be," said Vacas. 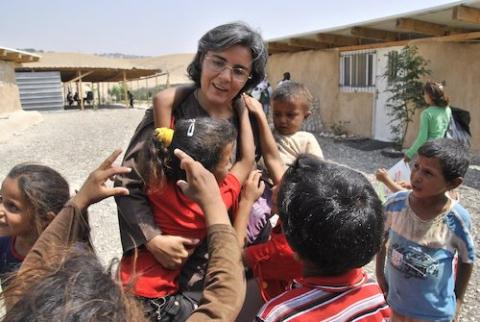 Working with people "on both sides of the wall" – from Palestinians to rabbis committed to peace and dialogue – the Comboni community seeks to bridge building and encounter "that makes a difference."

"This is our place, on the border," she said.

Asked if she thought the barrier would someday disappear, Vacas said, "in history, there have been so many walls, and sooner than later they fall."

"History is wiser than us. History has patience," she said.

Reflecting on her three-month volunteer ministry to Bergamo, Italy — site of the congregation's convent and home to many elderly sisters — Vacas said she felt she had no other choice but to help care for ailing sisters. Twelve sisters died of COVID in the initial months of the pandemic; Vacas arrived March 16 and left Italy three months later.

"I am a nurse, which is why I offered myself. I asked, 'What can I do?' " Vacas recalled, noting that the situation was very confusing given how little was known about the virus and how to treat it.

Vacas said the pandemic is now a constant concern on the West Bank, even though Israel is credited for controlling the pandemic within its borders and has vaccinated about 40% of its population.

"The pandemic is under control in Israel but is out of control on the West Bank," she said, part of a larger pattern in which Palestinians have struggled during the pandemic. "People are fighting for survival," she said, noting spotty health care access in the Palestinian territories. 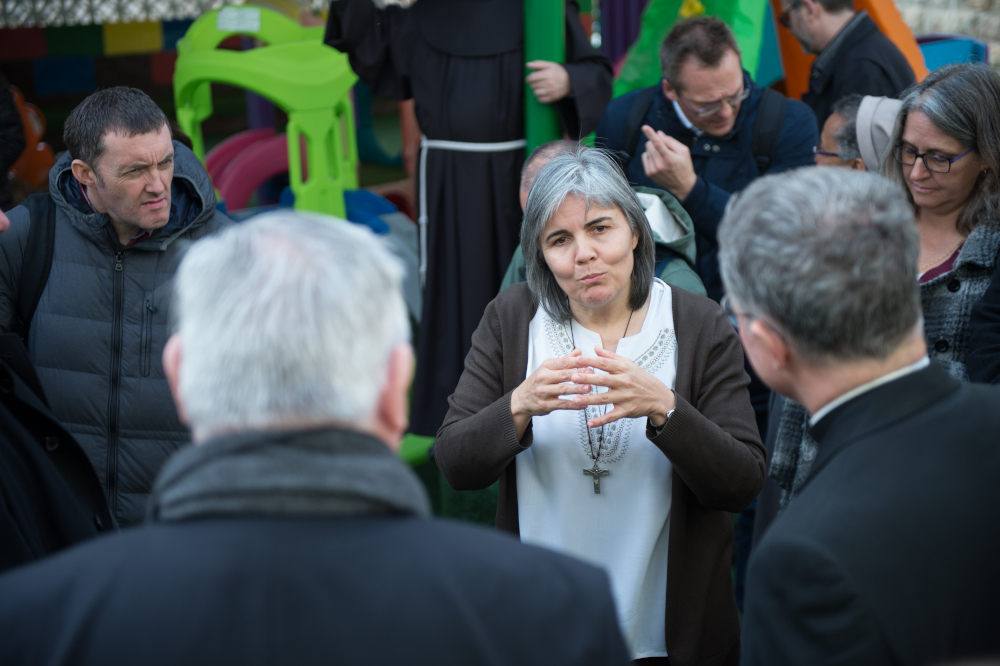 Comboni Sr. Alicia Vacas speaks to members of the Holy Land Coordination during a visit to the sisters' convent in Bethany, West Bank, Jan. 14, 2020. (CNS/Bishops' Conference of England and Wales/Marcin Mazur)

"Palestinians families just don't have any kind of social support right now," Vacas said, though she is encouraged by some movement on vaccinating Palestinians. International and Israeli human rights organizations had called for widespread vaccinations in the Palestinian areas controlled by Israel, and last month Israel agreed to vaccinate Palestinians who cross the border into Israel for work.

Vacas said she and her community will continue their work in ongoing difficult circumstances, though they are not expecting peace any time soon between Israelis and Palestinians.

She takes a long view, saying it is better to have hope than be optimistic. "It would be unbearable if I didn't have hope," Vacas said, adding, "hope means life is stronger than death, and we are convinced of that."

In the ceremony, Biden, Blinken and Thomas-Greenfield, all spoke of the need for U.S. foreign policy to affirm women. "They deserve our support and recognition," Blinken said. "The United States is in your corner." The first lady added, "Your fight is our fight."

Many of the 14 women honored are human rights activists, and those representing Africa, Asia, Europe and Latin America were named Women of Courage honorees. In addition, seven Afghan women assassinated in 2020 for their human rights activism were also honored.

This was the 15th year of the award, which the State Department said "recognizes women from around the globe who have demonstrated exceptional courage and leadership in advocating for peace, justice, human rights, gender equality, and women's empowerment — often at great personal risk and sacrifice."