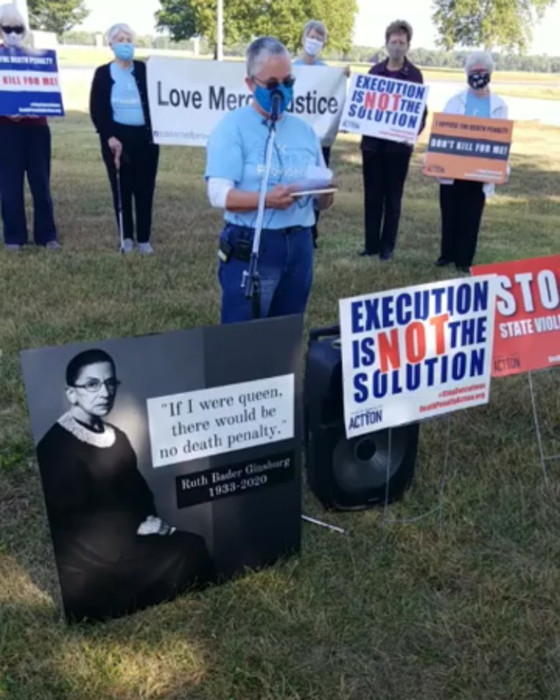 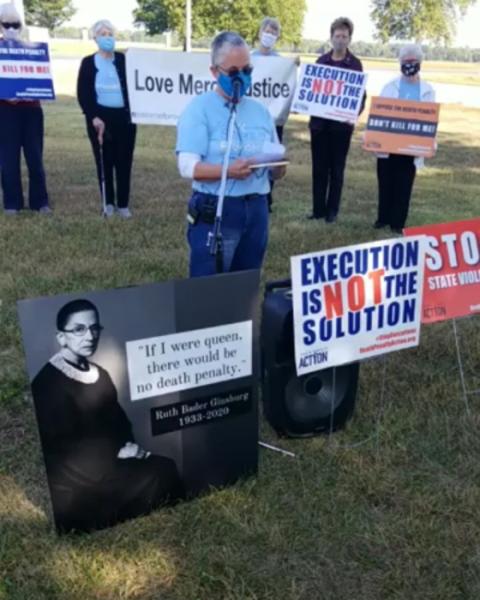 On Sept. 24, Providence Sr. Barbara Battista stood across the street from where her spiritual directee died just two days before.

"I can tell you that my experience was of a man who was at peace, eyes clear, face relaxed," she said.

That fact might seem surprising, since her spiritual directee was a man on federal death row named William LeCroy, convicted for the 2001 rape and murder of Joann Lee Tiesler. He had been under the influence of witchcraft and mistook her for a babysitter he claimed had sexually abused him when he was a child, according to The Washington Post.

At a news conference the morning of Sept. 24, Battista read aloud the letter she had received from LeCroy, who gave her permission to share it after his death.

Also speaking at the news conference was Lisa Brown, the mother of Christopher Vialva, who was also on federal death row. He would be pronounced dead less than eight hours later at 6:46 p.m., executed for his involvement in the 1999 murder of Todd and Stacie Bagley.

"This is hard, very hard," she said, her voice breaking as tears welled in her eyes.

LeCroy and Vialva were the sixth and seventh federal prisoners to be executed by lethal injection since July 14 after a 17-year hiatus on federal executions ended.

In a statement read aloud at a Catholic Mobilizing Network virtual prayer vigil prior to LeCroy's execution, Atlanta Archbishop Gregory J. Hartmayer noted that "we must always leave open the door for redemption and rehabilitation" of convicted killers.

Brown and Battista said at the news conference they had witnessed such changes in LeCroy and Vialva.

"This is a complex story," said Sister Barbara before reading the letter aloud. "There are lessons in here for all of us."

In the two-page letter handwritten on notebook paper, LeCroy addressed his remorse, but also the "unchangeable" label placed on convicts.

"It is a fact that some [child] abuse — physical, emotional and/or sexual — can stunt emotional growth so that such children are relatively unchanged as adults," he wrote. "We feel that we are what happened to us. ... And we lash out in anger, in frustration ... in revenge for the wrongs we have suffered."

He admitted that, no matter how deep his remorse, there was nothing he could do to reverse the horrific murder he committed.

But people can change, LeCroy noted in the letter, "continually learning, continually becoming someone better or worse. ... We come into spiritual teachers along the way who provide us with truth and force us to contemplate our lives."

Through the help of such spiritual guides and contemplation, he said, he strived "to attain a level of personal development by which morality ... is natural." 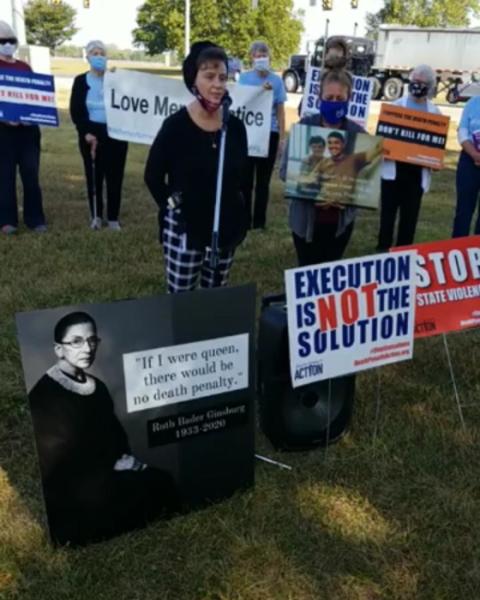 Lisa Brown, the mother of Christopher Vialva, speaks during a Sept. 24, 2020, news conference near the Federal Correctional Complex in Terre Haute, Ind. Her son was executed less than eight hours later that day. (CNS/Criterion screenshot from Facebook livestream)

Yet society seems to believe no convicted murderer is capable of change, he observed, instead passing judgment that "he's a murderer, nothing more." He quoted 19th-century philosopher Soren Kierkegaard, who wrote, "Once you label me, you negate me."

After reading the letter, Battista acknowledged the violence of LeCroy's actions affected Tiesler, who was "so viciously murdered," and her family and her friends.

But she said she felt LeCroy "can teach us something about forgiveness and growth, and what it means to be reconciled to one's fate."

After pausing to hold back her tears, Brown spoke. She began by apologizing to the family of Vialva's victims.

"My son wants you to know that he is deeply remorseful for the pain he has caused you for your loss," she said.

She recalled that during the murder trial, a statement from Stacey Bagley's mother was read.

"She said she prayed that the boys involved in the death of her daughter would come to know Jesus," Brown shared. "And I'm here to say that her prayer was answered."

While living out his death sentence, she said, Vialva had a conversion of heart. He embraced his mother's faith, Messianic Judaism, which combines Jewish traditions with belief in the Trinity and Christ as the Messiah.

She said he led the Passover Seder in the prison the last seven years, and that "my biggest blessing is to know that he passed on his faith to others."

Not all convicted murderers are capable of such change, Brown acknowledged. But, she said, "these men are not all the same. ... There are different circumstances to every case. What they fail to calculate into the process is that there is an ability to be redeemed and rehabilitated."

Hoefer is a staff writer at The Criterion, newspaper of the Archdiocese of Indianapolis.