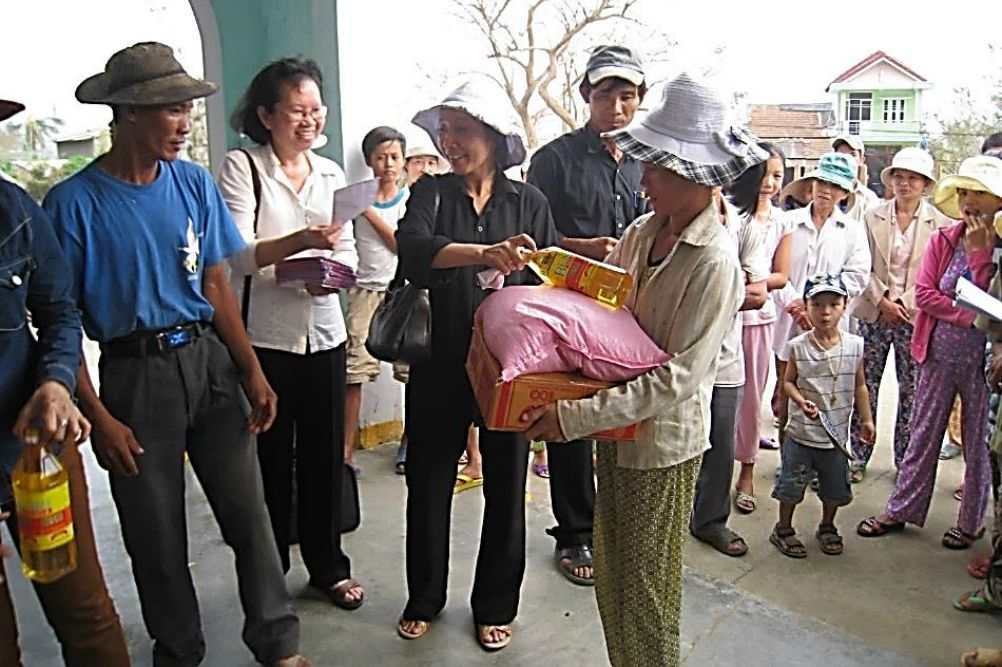 Sr. Binh Thanh Nguyen delivers relief supplies with Dominican Sisters from St. Rose de Lima to victims of flooding in Da-Nang, Vietnam, in October 2009. Each family received a box of noodles, a bag of rice, a bottle of cooking oil and an envelope with cash. (Provided photo)

I began to realize my destiny of itinerancy and mobility when I became a St. Rose of Lima Dominican in 1973, a follower of St. Dominic who spent his life traveling about preaching the Gospel. However, I never dreamed that this vocation would extend to being a refugee.

My life as a sister had just begun. I took my first vows in 1973 and a year later went to Saigon (Ho Chi Minh City) to study biology — preparing to teach in our schools — but my studies ended when Saigon was threatened by the communists. Our community, in a city the Vietnamese government still controlled, became a refuge for our sisters migrating from small rural villages and towns. As more sisters crowded in, I offered to stay with my family who lived nearby, two blocks from the Saigon River.

On the evening of April 29, 1975, fearful of communist take-over, my mother and I and my five siblings (9 to 23 years old) quietly made our way to the river. An American barge took us to an American cargo ship, where, with 14,000 others, we set out for the Philippines. It all happened so fast that I only realized when we were at sea that I was the only St. Rose of Lima Dominican in the group. The next morning, our fears were confirmed: Vietnam was now controlled by communism.

We traveled several days to reach Subic Bay, where half of the passengers disembarked. The rest of us traveled on to Guam. Several weeks later, we arrived in Indiantown Gap, Pennsylvania, where we waited for sponsors. In August, a family from Milford, Ohio, sponsored my family through Catholic Charities. I stayed with my family for a few months and then joined a group of Vietnamese Catherine of Siena Dominican Sister refugees in Waterbury, Connecticut. It was a lonely time because I had no idea if other St. Rose of Lima sisters had escaped, or where they might be.

I visited my family the following year, and during this visit, two sisters from the Waterbury Vietnamese community called to say they were at the bus station and had no place to go. They had left the community because of unresolvable conflicts. My mother invited the two sisters to stay at her house.

Not wanting to return to the troubled situation in Waterbury, the three of us had a decision to make. I contacted one of our Rose of Lima sisters studying in the U.S. and staying with the Adrian Dominican Sisters. Her priest friend invited us to Milwaukee to study English and help the Vietnamese Catholic community. But first we visited some Vietnamese priests in Houston, Texas, who suggested we work with them. One of our group decided to remain in Houston with two Dominican sisters who had come earlier.

Sister Ninh and I went to Milwaukee, with only a few clothes and our habits. We stayed with some Vietnamese veterans until we found a small house to rent. When another sister from Waterbury joined us, the bishop gave us an empty convent. Eventually most of the Waterbury sisters moved to Houston; some joined us in Milwaukee, including Sister Rosa, a Rose of Lima Dominican who had escaped to Canada in 1975. We learned about each other through the Red Cross.

I was still a junior professed, so in 1976, the vicar for religious for the Milwaukee Archdiocese received my promise of temporary vows. In 1979, our general superior in Vietnam appointed Sister Rosa to receive my final vows. I was 25!

Most of the sisters in our convent were now Catherine of Siena Dominicans from Houston and their postulants. Sister Rosa and I were at a turning point. Should we join the Catherine of Siena sisters or look for another group? While we were discerning, the Racine Dominicans offered me a place to stay while I studied at Marquette University in Milwaukee. These sisters became my new family. I studied part time, worked as a lab assistant, and began dreaming about being a nurse.

In the meantime, Sister Rosa contacted a Vietnamese sister she knew at the Kentucky Dominicans in Louisville, and we decided to visit them. In communication with my superior in Vietnam, I decided to move to the Kentucky Dominicans in 1981 and worked part time for Catholic Charities, visiting Vietnamese refugees. I asked my new host community for permission to study nursing at Spaulding University and graduated in 1988. Being a refugee, I qualified for grants that covered most of my tuition. The Kentucky sisters also helped me with expenses.

After graduation, I moved to Boston where there was a large community of Dominican sisters. I worked in a hospital for four years and as a home health nurse for the Visiting Nurse Association of Boston for 11 years. My time as a home health nurse was my favorite. Being in Boston also gave me the opportunity to study theology at Weston School of Theology. From Boston, I moved to Chicago, where I also had my Dominican community. I worked as a hospice nurse for four years, learning how to accompany individuals and families.

During this time, I studied the constitution, charism and mission of the Kentucky Dominican sisters in depth and finally transferred my vows to this community in 1992. 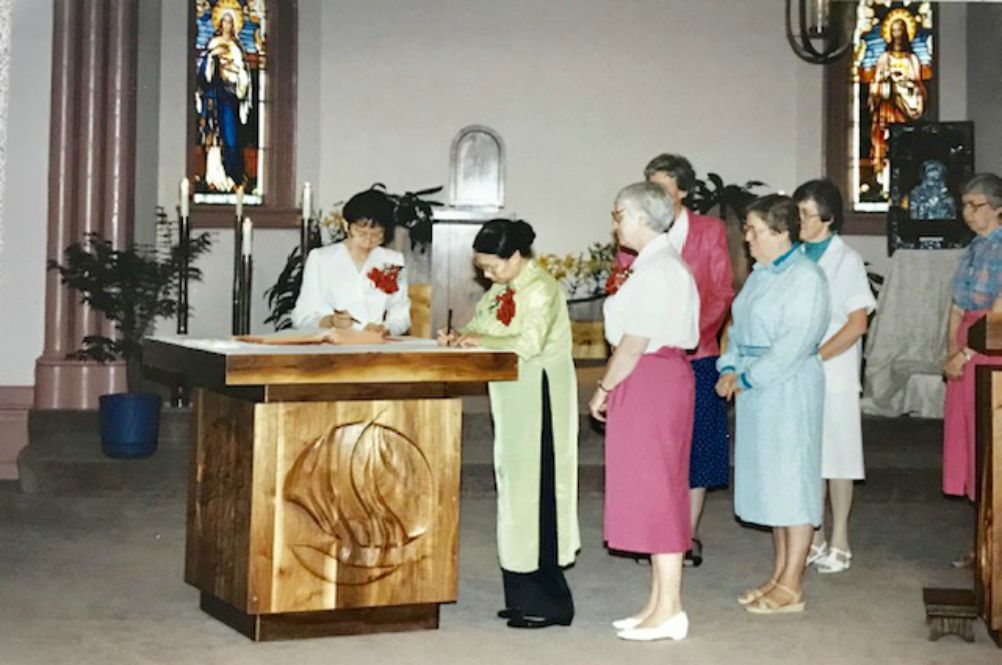 Sr. Binh Thanh Nguyen transferrs her vows to the St. Catharine Kentucky Dominican Sisters in a Mass celebrated July 5, 1992. She and her mother, Maria Nguyen (right), sign transfer documents while Sr. Elizabeth Miles, superior general, and the sisters who had journeyed with Binh wait to sign, too. (Provided photo)

However, I felt a strong desire to visit my former community in Vietnam. I had left as a young religious and had little experience of the sisters' missions. In 2008, I was granted leave for three years, during which I visited all 23 mission sites of the community. The sisters' work with street kids in Saigon was most inspiring. They rescue the children, give them a home and opportunity to attend school. The Vietnamese sisters live a simple life devoted to the poor, particularly in North Vietnam. I lived one year with Dominican sisters in Thai-Binh, where I shared with the sisters my knowledge of Dominican history and spiritualty gained from a summer pilgrimage to the "Lands of Dominic."

The Vietnamese sisters' devotion to the poor had inspired me to follow this spirit. After returning to the U.S., I asked to move to McDowell County, West Virginia, one of the poorest regions of the country, where I served in four small parishes and worked part time for Catholic Charities as a case manager to promote the GED (high school equivalency diploma).

Anna was one of our successes. She came to the Catholic Charities Outreach Office seeking assistance to pay her water bill and was introduced to the GED program. Within weeks, she had passed with flying colors. She went on to become a pharmacy technician with hopes of becoming a pharmacist. 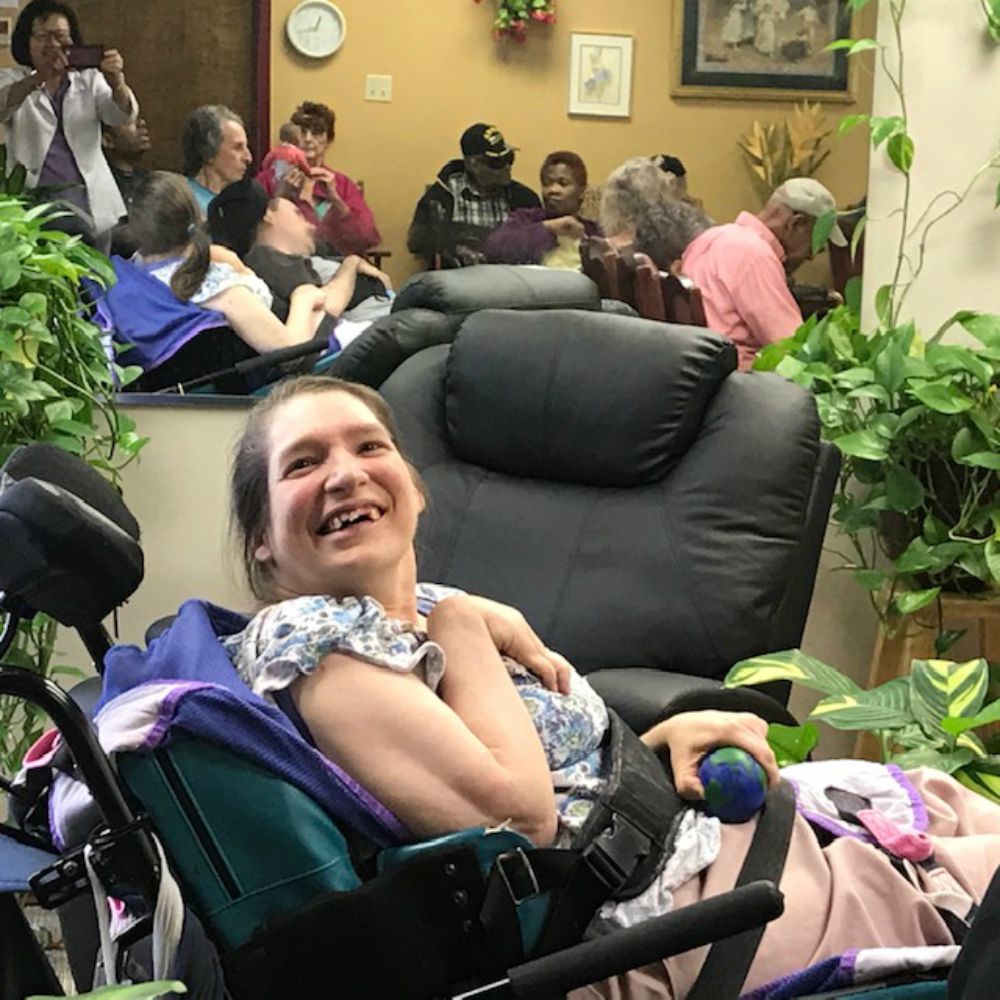 Candace holds Global Sister Report ball that has become a therapeutic device to help with her contracted fingers. She loves her version of the song "He's Got the Whole World in His Hands" — "She holds the world in her hand." Candace is a Padua group home member who attends the ADDH center where Sr. Binh Thanh Nguyen, pictured in mirror at left, ministers. (Binh Thanh Nguyen)

After four years, I moved to New Orleans where I met more Dominican Sisters of Peace — our Kentucky group had merged with several other Dominican groups to form the Dominicans of Peace. Here I worked eight months for Catholic Charities as a case manager for tornado relief and recovery in a parish, but I longed to return to nursing. God granted this when I was hired as a nurse at a center for persons with Alzheimer's and dementia and three group homes for persons intellectually and developmentally challenged. This is my current ministry.

Following St. Dominic in an itinerant life is not easy — it is filled with challenging adjustments, misunderstandings and different perspectives, but there is much joy. Each experience has enriched and made my Dominican life more fruitful. My call to itinerant life has brought me in touch with Dominican wisdom, love and a strong determination for mission. It has given me a strong commitment to justice and care for the poor and the ability to enjoy the present moment — and not to take things too seriously.

[Sr. Binh Thanh Nguyen escaped as a very young St. Rose of Lima Dominican from South Vietnam after the war and lived with several Dominican communities in the United States as she pursued an education. While working as a nurse, she did graduate studies in theology and religious formation and spiritual direction training in the ForMission program of the Religious Formation Conference. In 1992, she had her vows transferred to the Dominican Sisters of Peace in Kentucky.]