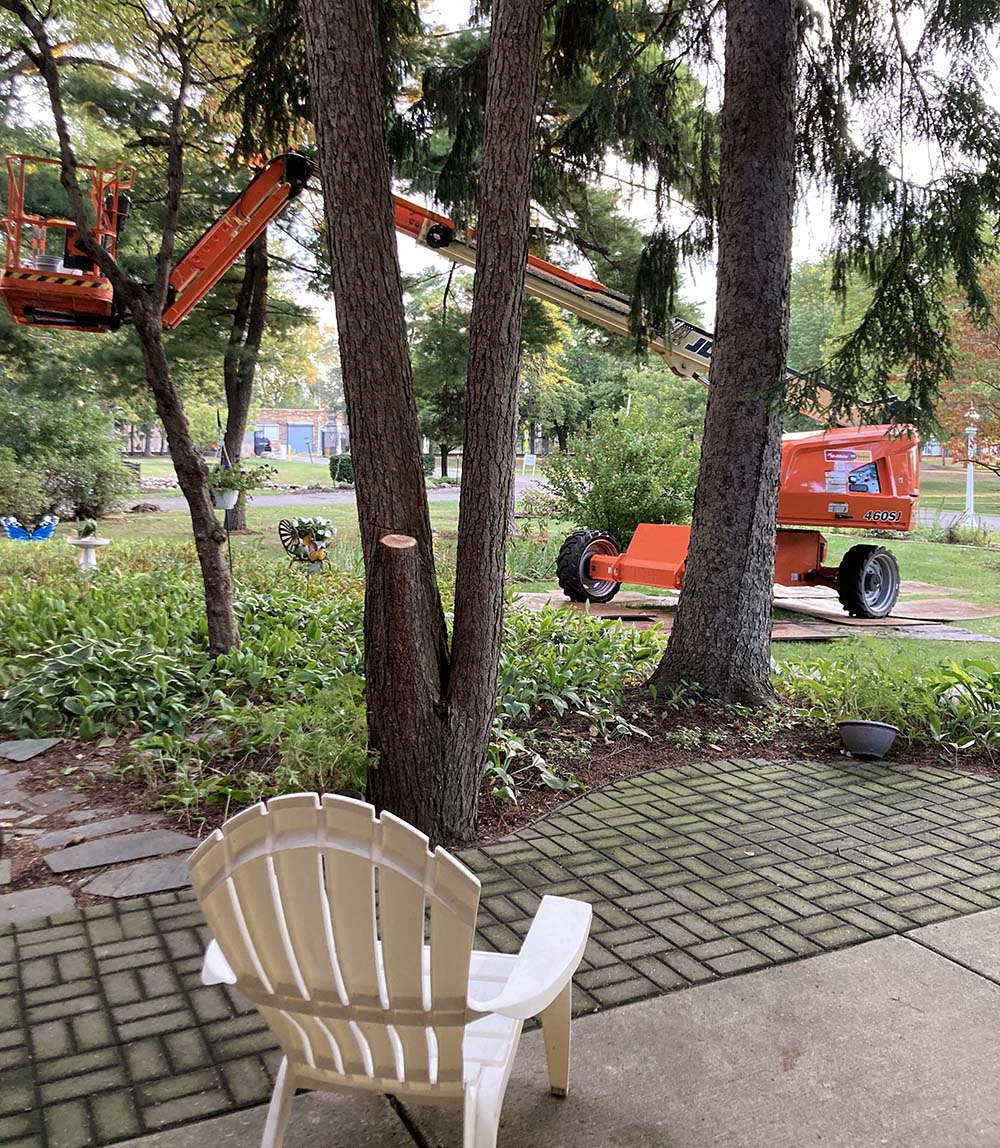 The place of my daily prayer was recently invaded by the need to fix the mortar of the house I live in. (Nancy Sylvester)

Take a moment to look at the picture. What do you see?

A garden? Machinery? The site of a sawed-off branch?

All of the above?

This is the place of my daily prayer, which was recently invaded by the need to fix the mortar of the house I live in.

I was compelled to snap this picture as I felt I was experiencing the wrenching clash of progress, modernity and our intimate connection with nature.

I couldn't believe that some of the trees, which were not dying, were going to be removed so that the machinery needed to do the job could be easily maneuvered and located in such ways as to not "require multiple relocations costing time and money." I felt the gnawing tug of conflicting values: needing to repair a three-story building to save the almost 100-year-old house versus the saving of healthy trees and shrubs.

The words of the Joni Mitchell song played in my head: "They paved paradise and put up a parking lot."

A bit extreme, I admit, but I found myself reflecting on progress and believing it is time again to ask the question: Progress comes with a cost — but how much?

We have called most developments in many areas of our lives — economic, political, cultural, social, technical — progress. With that term comes a host of other assumptions: good for us, not to be stopped, better than what came before, material growth, more developed.

With the growing clash of values within our country and throughout the world, perhaps it is time to imagine new ways of approaching how we evaluate progress, and how we integrate what is emerging with the values of what has come before.

Progress within market capitalism demands ongoing consumption of goods and services. For those with wealth and income, such progress is seen as a good. However, in the globalized economy such an approach is leaving in its wake increasing inequality in terms of wealth and income among people, as well as sickness and damage to our Earth home.

Progress within our social and cultural lives has often meant increased emphasis on the individual's needs, wants and achievements. However, for others who continue to hold the needs of the community or family first, the move toward greater acceptance of individuality is threatening, with its greater racial, sexual and religious diversity.

Our future demands imagination. We need to imagine new ways to "progress," to move forward — ways that can address the needs of the individual while honoring the values of the whole community. We need to imagine a true pluralistic, multiracial democracy that provides the mechanism for the many voices to shape public policies together. To imagine a new way to shape our economic life so that it serves the global Earth community.

During the time when the decisions were being made as to which trees to cut down, it seemed every time I came home during the afternoon one of the key decision makers was looking at the house.

It seemed as if everyone wanted to protect the trees but they just hadn't talked with each other.

I took the time to go and talk with the tree cutters, the people doing the mortar work and the management representatives. I engaged them in exploring how we could honor their work needs, budget restraints, and sustainability, which is a key value on the campus where I live. It seemed as if everyone wanted to protect the trees but they just hadn't talked with each other.

The person assigned to do the mortar work had worked at a nursery when he was young and appreciated nature and especially trees and flowers. He surveyed the area where he had to have access to the building and said he only needed a much smaller space requiring the minimal amount of damage to the trees. Eventually, all the parties were willing to reconsider their original plans and budgets, resulting in protecting the trees and shrubs with the minimal amount of damage.

While I was talking with the foreman of the mortar company, he mentioned that this company is one of the largest in the state of Michigan. As we talked, I wondered with him how long it will take before we can imagine a way to do this work on large old buildings that uses improved machinery to keep the workers safe and utilizes the newest and sometimes biggest equipment available and the needs of the environment — trees, shrubs and flowers that often adorn such sites.

We may not have imagined a whole new system, but we did hold each other's concerns and values seriously and opened ourselves to change. The outcome was an attempt to balance the values in a new way.

Now my prayer space is different. Seeing where the one branch was sawed off is a good reminder that with change you often give up something you love as you embrace the beauty and gift of what remains or is new. The rest of the tree is still standing, as are others around the house.

As I sit there and enter into contemplative prayer, that missing branch will remind me to enter the spaciousness where divine love dwells, sparking my imagination. To imagine progress in ways that involve both letting go, embracing and integrating values and approaches. To imagine moving forward into the future together.