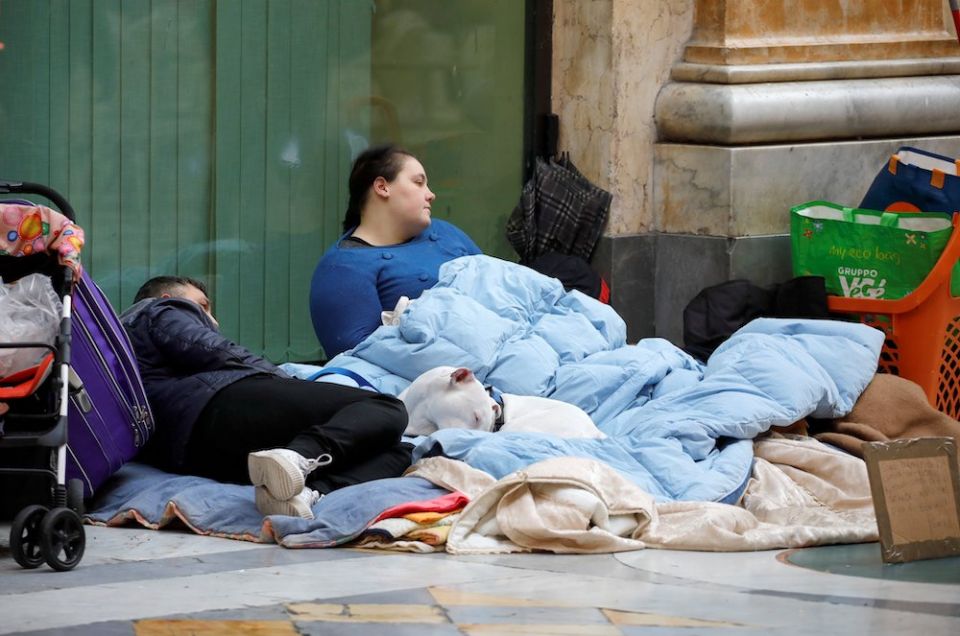 An unsheltered family rests on blankets along a street in Naples, Italy, Jan. 26, 2021, during the COVID-19 pandemic. (CNS/Reuters/Ciro De Luca)

New York — The mood at this year's meetings of the U.N.'s Commission on the Status of Women is a bit somber.

With the two weeks of meetings continuing and concluding this week, there is much talk about the effects and setbacks caused by the COVID-19 pandemic and how the last year has worsened already-serious conditions for many in the world, particularly women and girls.

To me, the frustration conveyed during the meetings was perhaps best summed up by MaryAnn Dantuono, the non-governmental organization representative for the International Association of Charities, a network of 100,000 volunteers, mostly women, working to combat poverty in their local communities in 55 countries.

"Sad but true: A right to a home is just a conversation for many people in the world," Dantuono said during the webinar, which was co-sponsored by the Vincentian Family at the U.N. and UNANIMA International, a U.N.-based coalition of Catholic congregations focused on concerns of women, children, migrants and the environment.

But the only way forward is to address problems publicly and to begin discussing solutions. And the webinar on hidden homelessness did just that.

"The 'hidden' in 'hidden homelessness' refers to not only the physical location of many of these experiences behind closed doors or in siloed areas of cities, but also to how our global society, through governance, definitions and even data, underestimate the issue and lack understanding of what such experiences look and feel like," said Daughter of Wisdom Sr. Jean Quinn, UNANIMA's executive director.

For several of the speakers at the March 18 webinar, shining light meant talking about personal experiences. 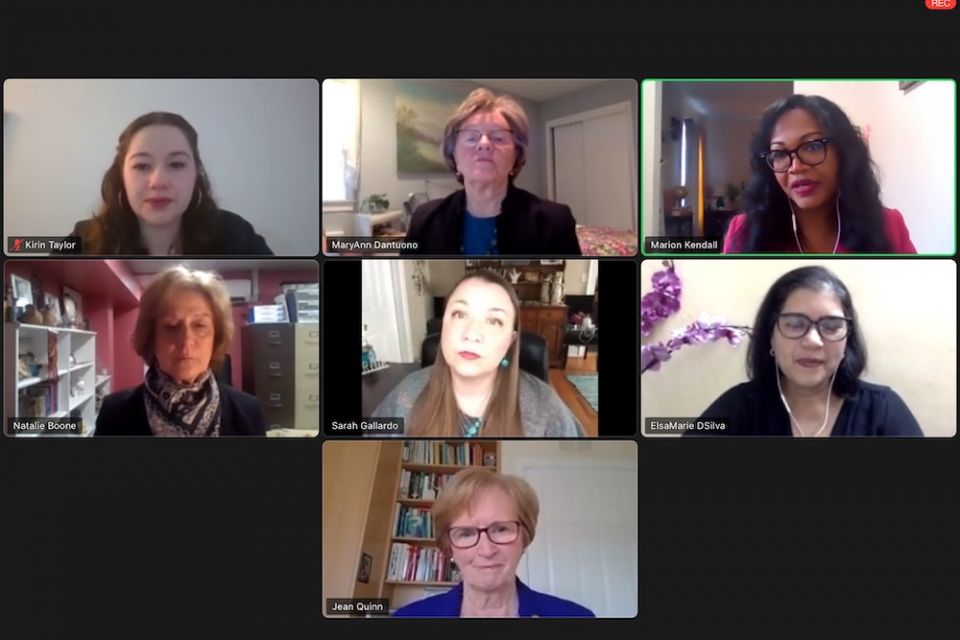 A screenshot of a March 18 webinar on hidden homelessness, which was co-sponsored by the Vincentian Family at the U.N. and UNANIMA International, a U.N.-based coalition of Catholic congregations focused on concerns of women, children, migrants and the environment (GSR screenshot)

Sarah Gallardo, a Connecticut-based activist and advocate for women who have suffered domestic violence, said she knows from her own experience that for many, "hidden homelessness" is the result of trying to flee from spousal abuse.

Many women and their young children leave abusive or violent home situations with little more than a shopping bag full of personal items, said Gallardo, a founder of Sarah Speaks Up, an anti-domestic-violence advocacy organization.

"It's important to see these women through the lens of trauma," Gallardo said. Addressing the challenges of homelessness and domestic violence means "we have to think about the full scope of people's experience."

The experiences of abuse and homelessness are so often intertwined — many women leave homes only after long periods of experiencing abuse — that it is difficult for women to report such abuse, said activist ElsaMarie D'Silva. Based in Mumbai, India, D'Silva is the founder of the Red Dot Foundation and president of Red Dot Foundation Global. Red Dot's Safecity is a platform for reporting sexual and gender-based violence.

Particularly in the context of India, D'Silva said, "most women and girls don't open up about these experiences."

Solving these problems, the women said, are not easy but must begin with both concrete solutions — for example, a need for more shelters for women who have been abused — and cultural change.

"We have to make it easier for women to leave [abusive situations] than to stay," Gallardo said. There is a need for a "super-saturated message" to children and young adults that domestic abuse should never be tolerated and that there should be no question of people needing help.

She said society must ask why most abusers are men and appraise how culture and religion contribute to those dynamics.

"Women need to know that their communities are behind them," she said.

Marion Kendall is executive director of New York City-based LifeWay Network, which provides secure housing for women who have been trafficked and was founded by Sr. Joan Dawber of the Sisters of Charity of Halifax. Kendall noted the ways in which women who have experienced abuse, sexual assault, trafficking and homelessness have also endured the COVID-19 pandemic.

A shelter resident told Kendall that she and others had been "living in a pandemic" before the global health crisis. For women like that and especially for those who have experienced homelessness, dignity is everything, Kendall said.

"One woman told me that her identity was not tied up with experiencing homelessness," Kendall said. Homelessness, the woman said, "isn't an identity, but a circumstance."

Circumstance demands solutions, though, and the need for more "safe spaces" for women and children promoted some speculation about how that could be done. Gallardo suggested that perhaps the increased number of buildings abandoned because of the pandemic could now be converted for such needs.

"We need to make use of those spaces," she said.

The talk of practical solutions took me back to webinars on homelessness earlier this year, including several during the Feb. 8-17 meetings of the U.N.'s Commission for Social Development, which focused on digital technology's role in strengthening global social development.

At a Feb. 9 sister-sponsored webinar, William Soward, executive director of ShelterTech, an all-volunteer nonprofit based in San Francisco, underlined the work his group and others provide to expand access to digital services. Saying that "connectivity is a basic human right," Soward noted his organization has helped provide internet access in 20 shelters in the city, including the city's largest, which is run by the St. Vincent de Paul Society.

In addition, ShelterTech has developed an online directory of 360 organizations that are assisting those who are experiencing homelessness and seeking resources like food, shelter and counseling.

During the webinar, Sr. Teresa Kotturan, who represents the Sisters of Charity Federation at the United Nations, praised ShelterTech's work as a needed "hands-on" approach that could serve as an example to other programs and ministries.

"We can learn from this," she said.

Young people are also becoming more active at these U.N. meetings. At a Feb. 17 UNANIMA-sponsored event, a number of UNANIMA interns from St. John's University who have done research on homelessness made presentations on the pressing need to overcome the digital divide.

But they also spoke of underlying dynamics. One of the students, AjiFanta Marenah, noted that "existing cultural practices and norms that oppresses women and outcast them continue to exist during displacement and migration.

"The impact these oppressions leave are carried by women as psychological traumas to their new destinations."

Unfortunately, that's true whether fleeing a war in Afghanistan or an abusive spouse in the United States.

Sisters versus homelessness: a look back on a year of focus

Ascension: And a little child shall lead me

Welcome to the Holy Thursday Revolution