I was going to go to Thailand again 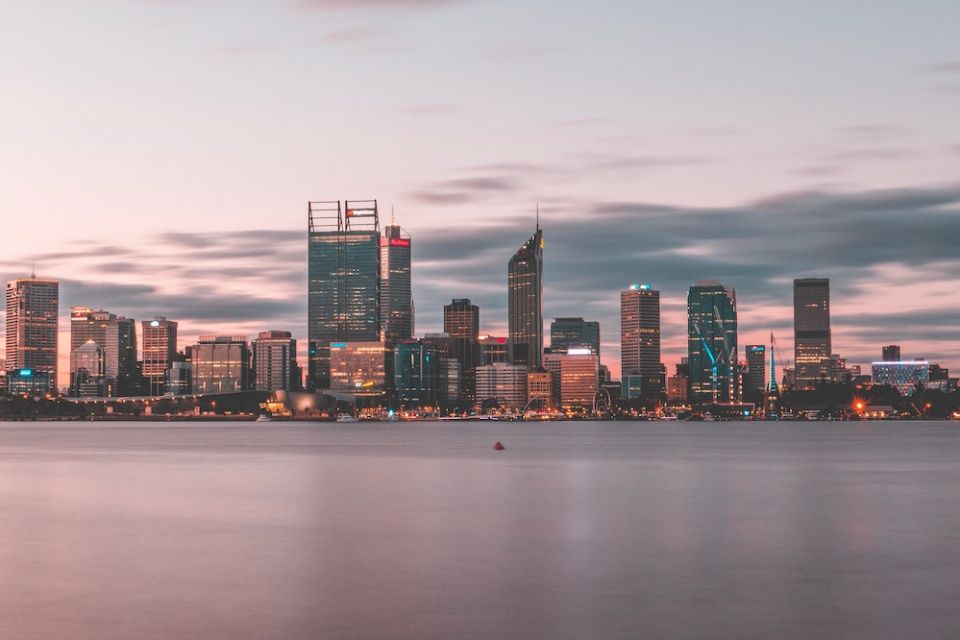 Alone with none but thee my God

Traveling to Chiang Rai in the north of Thailand and visiting the Jesuit-run Xavier Learning Center, I was enthusiastic and overjoyed to have been asked to join the staff to assist teaching in the English Immersion Program being offered to young people wishing to join the seminary and religious life. I had ministered in religious education before, so this would allow me to contribute again.

Back in Australia, I commenced my preparations, ready to rejoin at the beginning of the academic year. The wardrobes were tidied; how easy it is to stockpile clothes which might be needed one day! All my knitting wool was given away — no relaxing for me, I would be busy teaching and preparing lessons! No panic buying for me — food in the cupboards was used up because someone else would be using the housing unit while I was away. (But it is amazing how long it is possible to make do with what is in the pantry.) So many friends invited me for meals, since I am to be gone for a while. Decisions had to be made about the books I had recently received as gifts for my Golden Jubilee, Christmas and 70th birthday. I was so excited. This new venture had given me new life; our foundress Nano Nagle often said, "If I can be of service in any part of the world."

Then coronavirus put my return on hold.

With memories of the recent devastating bushfires, it was imperative that the pandemic did not take hold in Australia and so a state of emergency, with prevention as the major thrust, was rapidly initiated. As an island nation with a population less than 25 million but a land mass larger that the United States, air transport is the first option both for internal and external travel. This promptly ceased and the borders closed; a week later, air, land, sea and rail borders between the states ended. For our Presentation Congregation, it has also meant the sisters in Thailand are not permitted to return for their annual break; another sister has had her visit to family in Ireland postponed; and as for me, I will be staying put!

Founded by sisters originating in Ireland, Iona Presentation College in Mosman Park, West Australia, would normally have celebrated St Patrick's Day with a Mass in the local parklands involving the 1,200 students, staff, family, friends and the many sisters of the community. This normally public celebration had to be cancelled; just the 30 sisters gathered in their chapel for a low-key Mass and lunch.

Gone were the usual hugs and kisses — replaced by "how far is one meter?" (the recommended space for social distancing). Given that two-thirds of the sisters are over 80 with varying degrees of dementia and understanding, it was difficult to explain the necessary changes. The sign of peace was everywhere replaced with a slight nod of recognition — trying to be positive I am happy with this and have again taken up the traditional Thai sign of a polite "wai" to everyone.

No Communion under both species anymore and the Sacred Host is to be received in the hand only (which suited me, as my mother always said not to poke out my tongue at anyone.) Holy water fonts are to remain empty — although many habitually dip their fingers in the empty holy water font! Gatherings of over 50 are prohibited, so online "Mass for You at Home" has become the norm — although it has demanded an increase in my technology skills.

Residential care facilities are in lockdown with no visitors permitted, but with some effort being put in place to enable families to contact relatives via Skype and Facetime. My weekly visits are cancelled as only one designated visitor is permitted. Now my regular contact with the sisters at our motherhouse has stopped while we are urged to stay indoors unless absolutely essential. 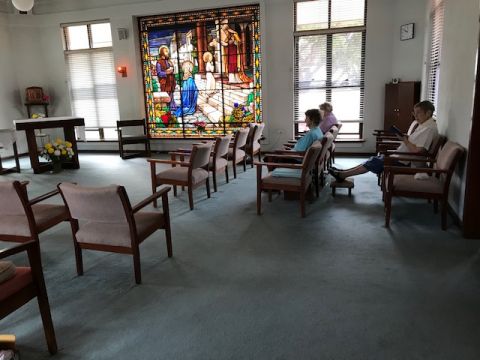 Sisters of the Presentation Society of Australia and Papua New Guinea in Western Australia pray in the motherhouse chapel. (Frances Hayes)

Will I ever return to Thailand? I don't know, but I need to keep living my life until something is decided.

One sister in our congregation, aged only 71, recently resigned as Deputy Leader, and a novitiate companion of mine has died just days ago. Stricter controls now mean only 10 guests can attend her funeral — this will mean the celebrant, four sisters and five of her family members. No Mass, just a quiet and somber placing of the coffin in the ground. The rest of us will pray and unite from where we are, knowing that later, we will publicly acknowledge her. Even the community Mass at the motherhouse is restricted to the members of the community.

Reflecting on the changes we are all making, I am reminded that God didn't send the virus, but as in all things, can use it to bring about change. I also choose to use this time. In the inner room of Matthew 6:6, I am at peace, able to focus more on my spiritual life, to write the four promised articles, read the books I had put aside, complete cross-stitch pieces, jigsaw puzzles, crossword quizzes.

For over 15 years I have lived on my own, so isolation is not an issue — socializing is not my greatest gift. I am able to pray, conscious of the many people who cannot. I am able to link with all the alone or lonely people. Emails, text messages and even letters are the norm of the day, enabling me to connect with others. All public spaces must allow 4 square meters per person, so the usual fortnightly family dinners have now been put on hold with us each connecting on Facetime.

Although few people have died from the coronavirus in Australia, each person's death is significant for their family. Daily updates are received from the government advisors and the National Medical Authority, but what was permitted yesterday is often overruled the following day. News broadcasts start with "we are giving the facts — there is no need to panic." Editors are being asked to ensure there are daily, positive reports of what is happening, of communities rallying to support others, random acts of kindness, care for neighbors, sharing whatever they have. Already social media posts are being shared about local groups helping each other, especially the elderly and vulnerable.

All our communities are linked with the Day of Worldwide Solidarity and Prayer and join with daily prayer being offered for those affected in any way — the deceased, the sick, medical authorities, government leaders. In an ironical way, this pandemic has brought us so much closer and made the world seem so much smaller. 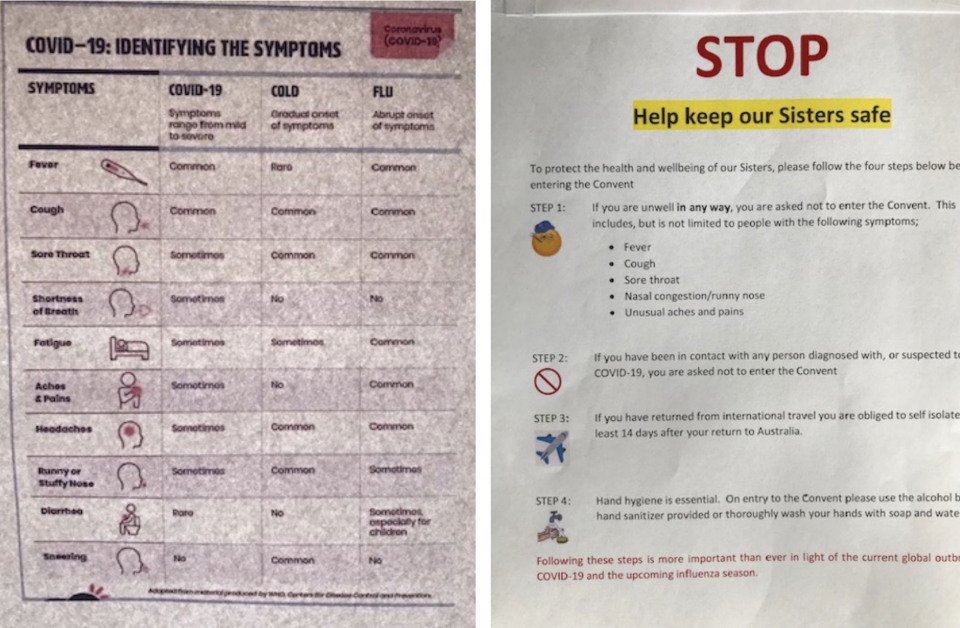 Signs in the motherhouse describing symptoms of COVID-19 versus those of the common cold and of influenza, as well as safety precautions (Frances Hayes)

[Frances Hayes is a Presentation Sister living in Samson, Western Australia. With an academic background in education and history, she moved from primary education to religious education to administration in Australia, and later became the English writer at the Apostolic Nunciature in Bangkok from 1995 to 2000. She then returned to Australia to minister as a support worker in aged care, a volunteer teaching assistant with refugee women and children, and a volunteer in an organization that builds connections with homeless and vulnerable people. She is a contributor to The Life on GSR. This is her first main column.]

Coronavirus | The coronavirus view from Australia

Poems and pilgrimages: finding pieces of myself