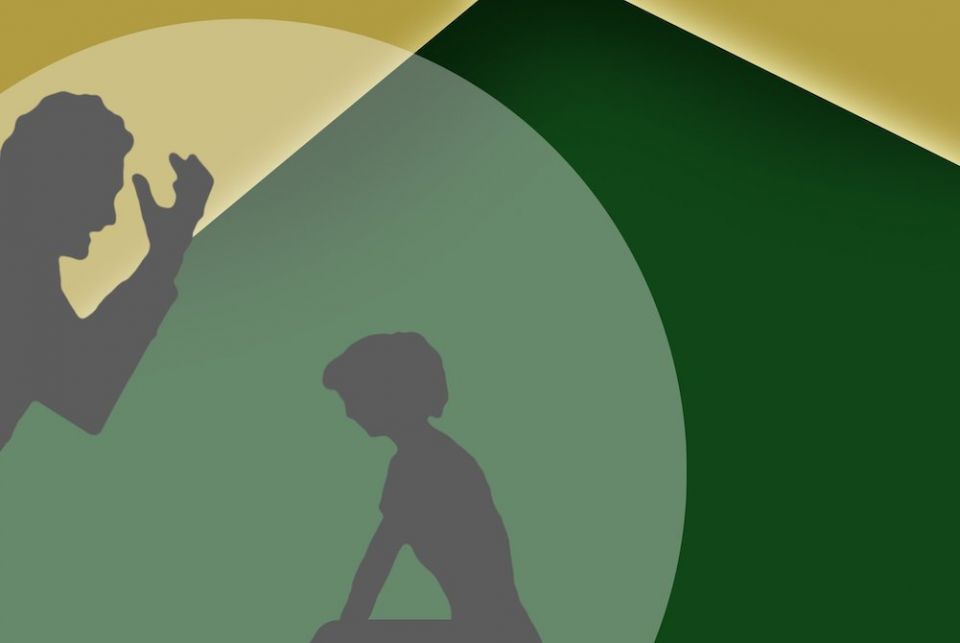 Sr. Immaculate Uwamariya from the Bernardine Sisters, who said she has saved hundreds of marriages during the lockdown, has been using her organization, Famille Espérance (Family of Hope) in Rwanda, to bring hope in a seemingly hopeless situation. (CNS illustration/Emily Thompson)

When the pandemic hit, Mukobwajana and her husband, Cyrille Mbarubukeye, lost their jobs as a grocer and an accountant, respectively, and were trapped at home in Ruhango, a rural district in southern Rwanda, for a prolonged period because of the shutdown.

Mbarubukeye started lashing out. They would argue about unimportant things, like how to cook meat with simple recipes, and more important issues, like whether or not she was allowed to visit her female friends, Mukobwajana said.

"One day, he came home drunk and started beating me because I couldn't cook meat in his own style," said the 48-year-old mother of four. "He continued beating me every day, and I had to run away with my children and rent a house elsewhere."

Mukobwajana said she cannot remember the number of times her husband hit her over the course of their marriage. Once, she lost consciousness only to regain it after hours. Things went from bad to worse when the government issued its work-from-home directive in March, she said.

"He could angrily shout at me and the children, threatening to kill us," said Mukobwajana, whose divorce became official in April. "He is now very violent, and he cannot listen to anyone. He hates even his children. How can you live with such a person?" 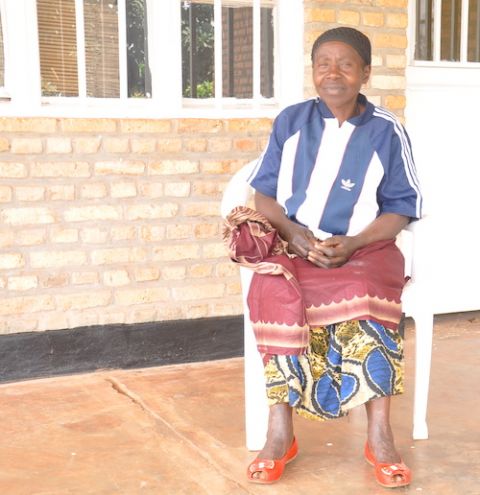 Anitha Mukobwajana, 48, shares her experience about staying in an abusive marriage in southern Rwanda. The country reports that 2 in 5 women have experienced some form of physical violence since the age of 15, with the percentage rising to 56% for married women, according to the 2010 Rwanda Demographic and Health Survey. (Aimable Twahirwa)

Cases of domestic violence are rising as a result of economic hardship during pandemic-induced lockdowns. The United Nations reports that the combination of economic and social stresses brought on by the COVID-19 pandemic, as well as restrictions on movement, have severely increased the number of women and girls facing abuse in almost all countries. In parts of sub-Saharan Africa, violence between partners is a reality for up to 65% of women.

In Rwanda, 2 in 5 women (41%) have experienced some form of physical violence since the age of 15, with the percentage rising to 56% for married women, according to a report by the 2010 Rwanda Demographic and Health Survey, the most recent available data. The survey also found that many cases are not reported to authorities, and few women get justice or receive medical care.

Currently, the capital of Kigali and a few other districts are in full lockdown following the surges of new confirmed COVID-19 cases in an effort to slow the spread of the virus. As of Jan. 26, Rwanda had more than 13,000 cases of COVID-19, and almost 200 people have died from the virus.

The lockdowns have fueled a surge in gender-based violence across the country, with women and girls more isolated and vulnerable to abuse and exploitation, according to nongovernmental organizations and women's rights campaigners. There are no official figures on the number of cases of violence against women in Rwanda, but calls to help lines have surged since lockdown measures were imposed, advocates say.

Andrews Kananga, lawyer and executive director at the Legal Aid Forum in Rwanda, told the New Times, a local English-language newspaper, that from their review, gender-based violence has taken its toll during the lockdowns. He said teen mothers and estranged couples who were undergoing a divorce process and still living together when the pandemic struck are the most affected.

"Teen mothers and children who survived on child maintenance from one of their parents are now suffering — reason being, the fact that some jobs were halted or men using lockdown as an excuse to stop paying child support," he said.

"We receive hundreds of calls a day from people who need our help," he added.

In response to escalating domestic abuse, the Rwandan government directed relevant institutions mandated with investigating and prosecuting crimes, such as the Rwanda National Police and Rwanda Investigation Bureau, to do a thorough job and ensure those found culpable are held accountable. However, Sr. Immaculate Uwamariya from the Bernardine Sisters opted to act differently, using words of wisdom to heal the wounds of these families living in abusive relationships.

She said any conflict between couples can be resolved or managed at family level.

"Bringing together spouses is always key to address the substantive issues that give rise to any conflict in a family," she told Global Sisters Report.

Uwamariya, who said she has saved hundreds of marriages during the lockdown, has been using her organization, Famille Espérance (Family of Hope), to bring hope in a seemingly hopeless situation. Her organization helps families and couples live harmoniously by conducting regular couples counseling and advising partners to show each other love and support. She has been visiting families during the lockdown and sharing the word of God to promote the value of faithfulness among married couples. 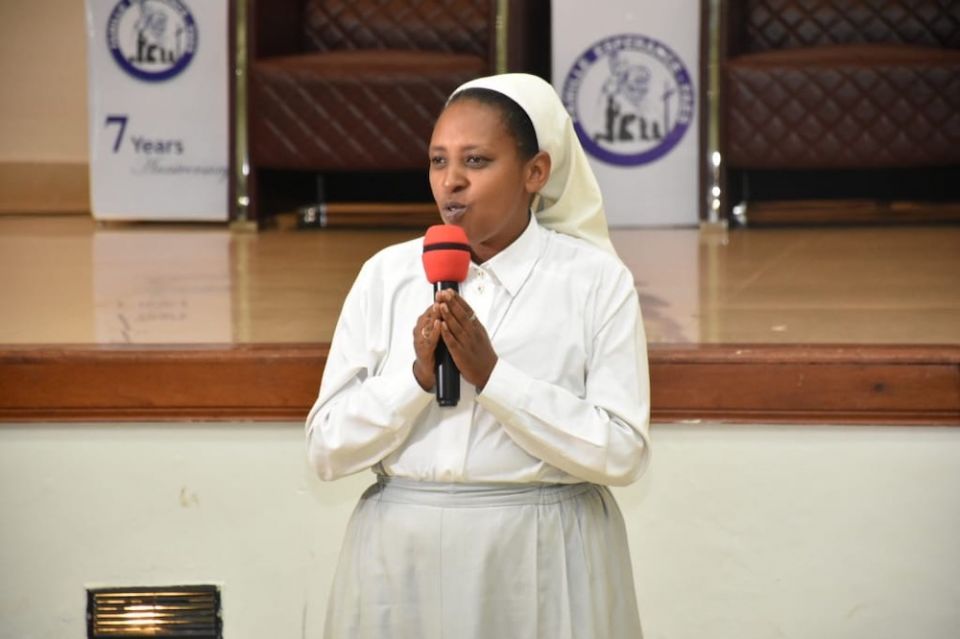 Sr. Immaculate Uwamariya of the Bernardine Sisters addresses members of Famille Espérance during the December 2019 celebration of the seventh anniversary of the organization. (Aimable Twahirwa)

"Preventing and addressing intimate partner violence is never easy and requires mindset change through the Gospel," said Uwamariya, who is a renowned motivational speaker and the recipient of various national honors and awards for her work, including the Imbuto Foundation's Mentorship Programme Award, supported by Rwandan first lady Jeannette Kagame.

Currently, Famille Espérance mentors about 700 couples each year and has 500 members, including married couples and individuals, who are dedicated to supporting and strengthening other couples in their love and commitment to one another as a move to overcome the growing phenomenon of spousal violence and other marital conflicts across the country.

During the lockdowns, Uwamariya increased her workload and spent most of her time speaking to families about how they could overcome their disputes and stop domestic violence and abuse. She holds regular meetings while maintaining social distance according to COVID-19 rules to address stressful and emotional issues among married couples.

Mukobwajana was recently selected to take part in one of many mentoring sessions run by Uwamariya to help divorced couples reconnect with former partners.

"I attended the session, and I will continue to attend more so that I'm able to find peace," Mukobwajana said. "It's not easy to understand why men enjoy beating women in this modern world."

The situation is similar in other Africa countries. In Tanzania, religious sisters are playing a critical role in preventing and responding to incidents of violence against women and girls. 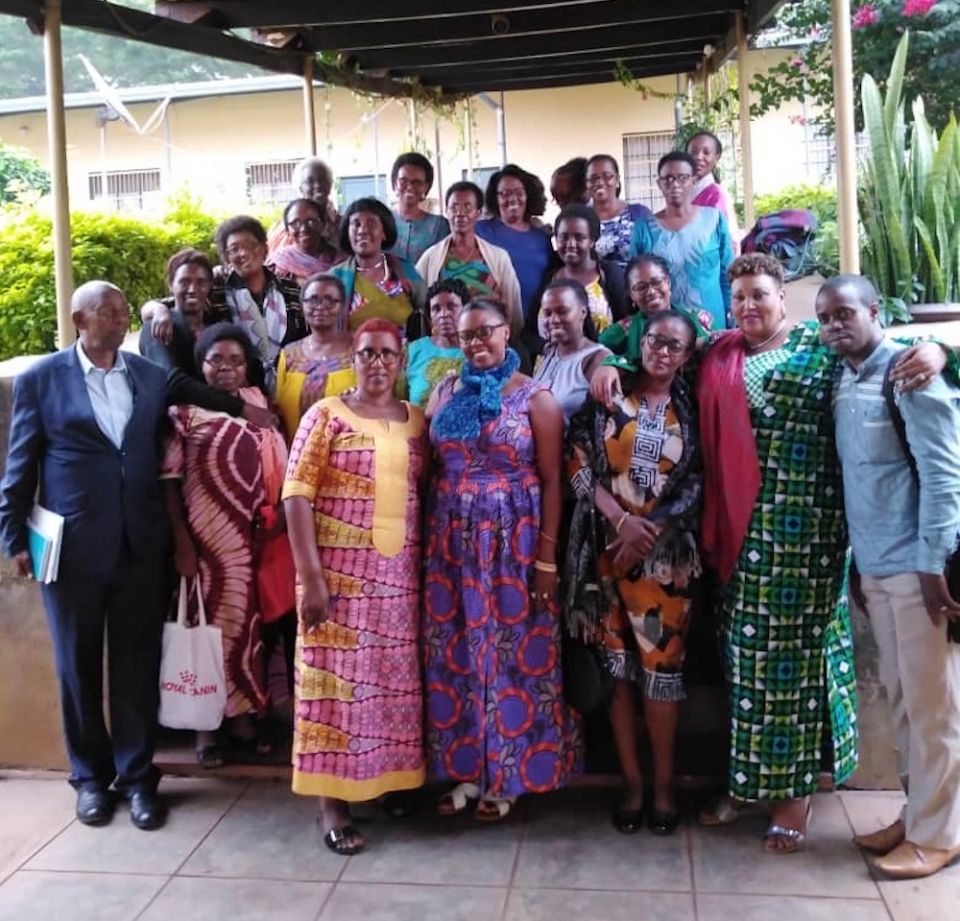 Members of Famille Espérance during a retreat in Mbare, a village in southern Rwanda. To support family cohesion, Sr. Immaculate Uwamariya of the Bernardine Sisters organizes regular couples retreats to build godly marriages through a time away from home. She said young couples are divorcing or separating because they were not prepared for marriage. (Aimable Twahirwa)

Sr. Grace Mkosamali of Our Lady of Good Counsel is using the radio to spread the message to end domestic violence. In the East African nation, 4 in 10 women have experienced physical violence between the ages of 15 and 49, according to 2015-16 Tanzania Demographic and Health Survey and Malaria Indicator Survey. The survey also notes that experience of physical violence is higher among women who are divorced, separated or widowed (63%) as opposed to married (44%). It adds that the most common perpetrator of physical violence among married women is their current husband or partner.

Mkosamali, who is a trained counselor and psychologist, said incidents of domestic violence have increased during the pandemic, even though the country's lockdown ended in May, and said she hopes her radio messages will help women be safer in their homes, noting that the lives of many women and children are at stake.

She educates her listeners through her daily program that domestic violence is a serious problem that requires immediate attention.

"Most families in Tanzania and elsewhere are facing a lot of challenges arising from the impact of COVID-19," said Mkosamali, who also posts some of her talks on counseling on YouTube. "Therefore, there is urgent need to talk about psychological health to help families cope with the psychological impact of the pandemic." 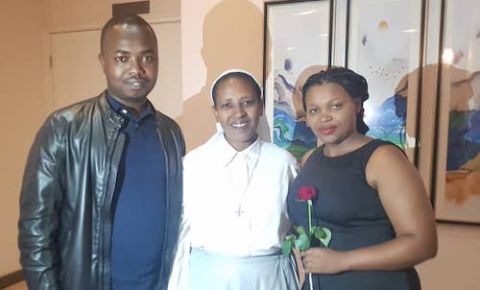 Sr. Immaculate Uwamariya of the Bernardine Sisters, center, with a couple she mentored through Famille Espérance (Aimable Twahirwa)

Sr. Nkhensani Shibambu, superior general of the Companions of St. Angela, said the country —already tackling an epidemic in domestic violence before the onset of lockdown — has reported an increase in domestic violence and intimate partner violence during coronavirus lockdown, which ended Jan. 15.

She urged the government in an August statement to end sexual harassment and violence against women. Shibambu, who is also the president of the Leadership Conference of Consecrated Life South Africa, noted in a statement released to commemorate International Women's Day in March 2020 that most women were living in fear of abuse during COVID-19 lockdown.

"One can thus argue that the lockdown made women more vulnerable to gender-based violence and Femicide," she said.

In the meantime, Mukobwajana, who is now concentrating on taking care of her four children, has urged the government to end gender-based violence by eliminating the root causes of that violence: gender inequality, financial issues, alcoholism and unfaithfulness among partners.

"There's no need for women to continue dying in the hands of their partners," she said. "The government should find the root causes of domestic violence and address them."

[Aimable Twahirwa is an award-winning journalist and editor based in Kigali, Rwanda. Doreen Ajiambo is the Africa/Middle East correspondent for Global Sisters Report. Follow her on Twitter: @DoreenAjiambo.]