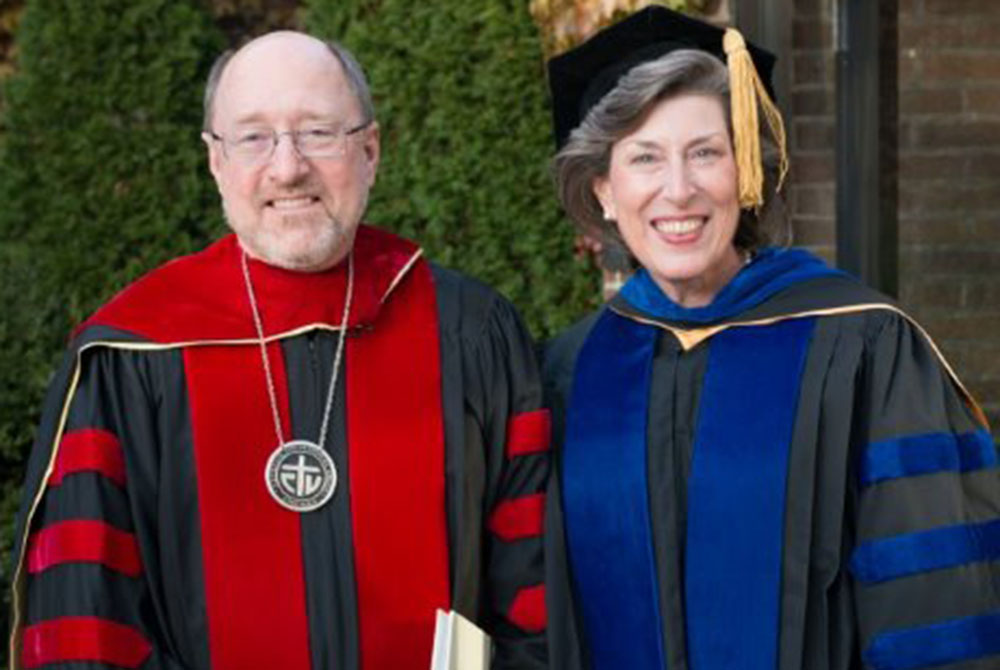 Dominican Sr. Barbara Reid, left, with outgoing president of Catholic Theological Union, Fr. Mark Francis, at his installation as president in the fall of 2013 when Reid was vice president and academic dean. (Provided photo)

The first woman to hold this position, Sr. Barbara Reid is the president-elect of Catholic Theological Union in Chicago, elected by its board of trustees Nov. 12.

The Dominican Sister of Grand Rapids, Michigan, will succeed Fr. Mark Francis beginning Jan. 1, 2021, as he retires after serving seven years in the presidency.

"I look forward to helping to continue to build CTU into the stellar graduate school for theology and ministry that it is, and to continue to help it to grow and thrive," Reid told Global Sisters Report. "And as we are still very much committed to the vision of Vatican II, to help us to discern how do we keep that vision alive in the 21st century, how do we translate that into this current time as we form not only men and women religious, but also men and women laypeople for ministry." 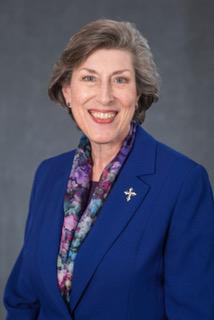 A renowned biblical scholar — regarded particularly for her work in feminist biblical interpretation — Reid has been on the CTU faculty since 1988, having served as vice president and academic dean from 2009 to 2018, experience that means she's long known "what's going on in the president's office," she told GSR.

She's also been active in the Association of Theological Schools of the United States and Canada, having served two terms on its board of directors, and is the past president of the Catholic Biblical Association.

"Sr. Barbara has distinguished herself as an expert administrator but also as a first-rate scholar who has deepened our understanding of the Word of God in today's diverse and challenging world," said Chicago Cardinal Blase Cupich in the press release following the announcement.

Up until now, the presidents of Catholic Theological Union have always been one of the men religious and priests who belong to one of the 24 men's communities that are the corporate owners of CTU, Reid said. The communities own the school and have the "critical voice" in selecting the president along with the board of trustees.

"Partly, I don't think it's been something that's been considered before because of the nature of the school, and I think partly it's because most seminaries look to a priest to be the rector of a seminary," she said. CTU, however, is more than a seminary, she added, as it prepares men for ordained priesthood and religious orders, but it also prepares lay men and women.

Women religious "have provided leadership in the past, and it's time," Reid said. The men religious who own CTU consulted one another, as well as Cupich, and they all agreed that the next president did not have to be from one of their communities, she said.

"I hope that my appointment can help raise the profile of women religious and help people to know that we're still a vibrant presence in the church," she said. "There may be fewer of us, but we're still faithful to the mission and preparing those who come behind us for that mission."

According to the press release, Reid has received numerous honors and awards over the years: an honorary doctorate from the University of Graz, Austria, induction into the Aquinas College Hall of Fame, the Yves Congar Award for Theological Excellence from Barry University, the St. Martin DePorres Award from the Southern Province of Dominican Friars, the Jerome Award from the Catholic Library Association of America, the Theological Award for Distinguished Women Theologians from the College of Mount St. Joseph, and the Sophia Award from Washington Theological Union.

Fr. James Halstead, chair of the CTU Board of Trustees, said in the press release that Reid "is an excellent leader and has a unique background that will help to lead the school into the next decade.

"As the first woman religious to lead CTU — a union of twenty-four men's religious orders — Sr. Barbara's leadership is an important statement of CTU's commitment to Vatican II and the vision of Pope Francis."