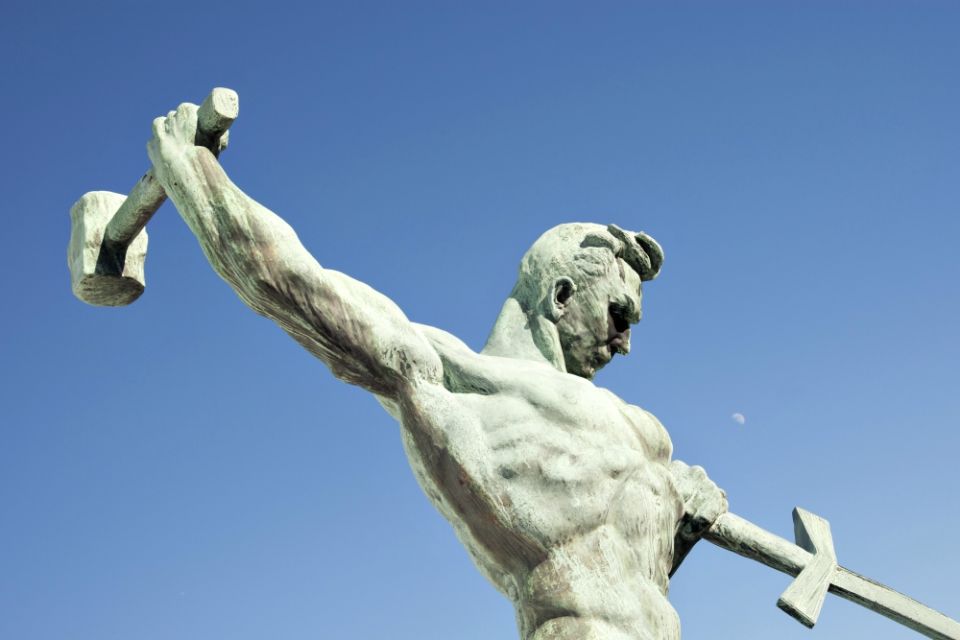 Listening to the news, reading the newspaper, watching our corporate American personality work through differences, I'm challenged by these words from Isaiah 2:4: "They shall hammer their swords into plowshares …"

Some Americans who exemplify a possible way to take cutting criticism and angry feelings and turn these "swords" into "plowshares" call to me today.

On Nov. 29, I found an example in a TV interview with columnist/commentators Mark Shields and David Brooks. During "PBS NewsHour," interviewer Judy Woodruff asked them what they were thankful for on Thanksgiving.

Brooks recognized our American "sins" in the genocide of Native Americans and the slavery of African Americans. He confessed that as we honestly look at our failures, attempting to honor all and work for justice, America is "still the most loveable, amazing country on the face of the Earth."

Shields expressed his gratitude for Americans whose recent testimony has shown that their love of country and truth are more important than their careers in public service. Shields also noted that he and Brooks had shared ideas for 19 years, and during that time "I have misspoken, I've contradicted myself, I've said stupid things, and never once in those 19 years has David taken a cheap shot, and for his friendship and decency, I thank him."

These two commentators who have disagreed publicly believe that our democracy can learn to turn the "swords" of partisan bitterness into desires to negotiate a truce, one that will allow the country to sow the seeds of healing.

On Dec. 1, I watched "Harriet," the new movie on the life of Harriet Tubman. She took the cutting brutality of slave owners and "hammered" her suffering into the confidence of a God speaking to her in words of deliverance from slavery, as described in Exodus. She would often announce her plans for an escape by singing the Negro spirituals "Go Down, Moses" or "Wade in the Water."

Visited with seizures caused by a head injury, she sometimes had visions, which strengthened her resolve to free her people. She believed God could turn her life into a promise of deliverance not only for herself but others.

Tubman, known secretly as "Moses," relied on divine strength to help her lead the way to freedom. She would use quilts drying on a clothesline to let folks know an escape was imminent, with the route sewn on it in plain sight. With great courage, she plowed her way through remembered cruelty, infested swamps, barking dogs and violence to bring others to safety.

Traveling the Underground Railroad, she was supported by abolitionists, Quakers, freed slaves and others who responded to the moral degradation of their black sisters and brothers. Led by this remarkable American woman, with creativity and resiliency the African American community forged the anvil of freedom from the sword of slavery.

Tubman is a mystic-mover who changed American history for the better. She is a prophet of community when people of all races support each other in their desire for greater wholeness.

Dorothy Day is another example of those who hammer their swords into plowshares. Her Bohemian lifestyle, flirting with communism, struggling with difficult choices, gave her the "education" to recognize the need for systemic change if American democracy is to work for all. With little support, she stood with those who were poor and dispossessed, especially during the Great Depression and the Cold War. She found ways to hammer out justice in America through journalism, social activism, and founding Catholic Worker Houses of Hospitality, plowing the rich soil of the American dream.

She also taught me how to turn swords into plowshares in an unusual situation.

It was 1973, when I was arrested with Hispanic women and sisters for standing with the United Farm Workers; we were held in prison for two weeks in the Fresno County Industrial Farm in California.

Among those arrested was Dorothy Day. I'll never forget her advice to the "nuns" who accompanied the Hispanic women in our imprisonment. Dorothy gave us a quick course (i.e., "Jail 101") in telling us what to do when we arrived at our barracks. "The nuns should clean the bathrooms and decorate your space, if you can." The cleaning of the bathroom area was easier than the decorating. We could only take our purses and the clothes we were wearing into the prison area.

As we attempted to decorate our space, I remember some of the women sharing their lipstick, while someone else had dental floss in her purse, and we found paper towels in the bathroom. Soon we had "mobiles" hanging from the ceiling with words like "Hope," "Forgiveness" and "Love."

We also took turns praying silently from 10 p.m. to 6 a.m. This meant one Hispanic woman and one sister would sit at the picnic table in the middle of our barracks with the Bible in Spanish and English for quiet reflection. Someone had a holy card of Our Lady of Guadalupe in her purse, and she took the silver wrapper off a stick of chewing gum to make a little frame around the picture. Our Lady of Guadalupe was our bond during this dark night of uncertainty, especially as wives and mothers prayed for their children, spouses and elderly parents who missed them terribly while they served their two-week prison term.

One day after lunch, someone noticed lots of empty dog food cans in the dumpster. We realized that we had just eaten dog food for lunch. (Quite honestly, it didn't taste so bad since it was served like refried beans and rice!) However, we needed to learn something about loving in this situation and someone told us that "fasting helps you love better." So we tried to fast from negativity toward the cooks, since we had little control over fasting from food. And we learned to fast from negative self-criticism when the routine of the prison day wore us down.

Dorothy was in the adjacent barracks so we seldom could talk to her, but one exchange will always remind me of her spirit.

Three times we were taken by the prison bus to "be released." On two occasions, the bus driver opened the door at the courthouse and an officer told him to take us back to prison. On the third visit, I was sitting on the bus trying to "hammer" my angry feelings into compost and I decided to ask folks sitting around me, "What is your favorite Scripture quotation?"

Dorothy was sitting behind me, so I turned to ask her. I'll never forget her response. In a somewhat abrasive manner, she said with great conviction: " 'Nothing is impossible for God.' Is there any other?" A silence settled over those of us who heard her as we felt energy shifting in our prison bus.

Gratefully, we did not return to our barracks that night. It was Aug. 15 and we were released at midnight with no press present. Dorothy Day taught me that systemic change and living love were strong plows to prepare the soil for new life.

This New Year challenge invites me to believe that, indeed, we can hammer our swords into plowshares, even in our polarized America.

Immok-a-what? Supporting the farmworkers of Florida

Out of the bag: a new tea experience

What if God is teaching us something right now?