Samaritans of our times: a day of service in our neighborhoods

by Honorine Uwimana
Ministry
This article appears in the Notes from the Field feature series. View the full series. 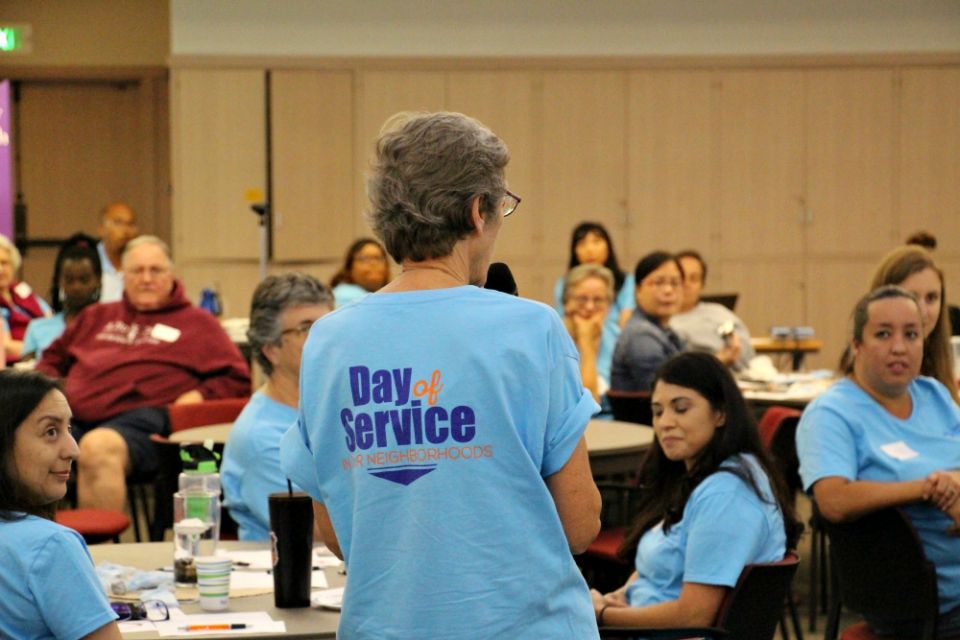 Editor's note: Notes from the Field includes reports from young people volunteering in ministries of Catholic sisters. A partnership with Catholic Volunteer Network, the project began in the summer of 2015. This is our 10th round of bloggers: Honorine Uwimana is a St. Joseph Worker in Orange, California, and Samantha Kominiarek is an Assumption Mission Associate in Chaparral, New Mexico.

Orange, California — Usually, when I hear a catchphrase starting with "Divide," it is always followed by a tragic story or a regretful past.

"Divide and rule": How many times did I hear this imperative in my history-class discussions growing up in Rwanda to refer to the method European colonials used to fracture Africa to the frontiers present today between its countries?

"Divide" is always a verb that crosses my mind anytime I read the root causes of the wars in the East Africa region. My past dark encounters with this verb made me think that it is always followed by negativity — until our Sept. 28 day of service.

Divide the city, find out needs and, with people of like heart, serve the dear neighbor without distinction. This is the Sisters of St. Joseph of Orange's vision, and it finds its roots in the hills circling the village of Le Puy, France, where a small group of women were earning a livelihood making lace and selling it to heal the ills of their society.

Almost 370 years later, the lace is still unfinished. Needs still exist in society, and they echo a call to action. The sisters put forward ways of bringing laypeople together to address the needs identified in their neighborhoods using their various gifts and aptitudes, such as the annual day of service.

At the heart of the mission of the St. Joseph Worker Program is seeking the face of Jesus in those who are poor and suffering. It is through that prism that the St. Joseph Workers joined the Sisters of St. Joseph of Orange and more than 90 other people the morning of Sept. 28 to serve at 14 different sites throughout Orange County, California. 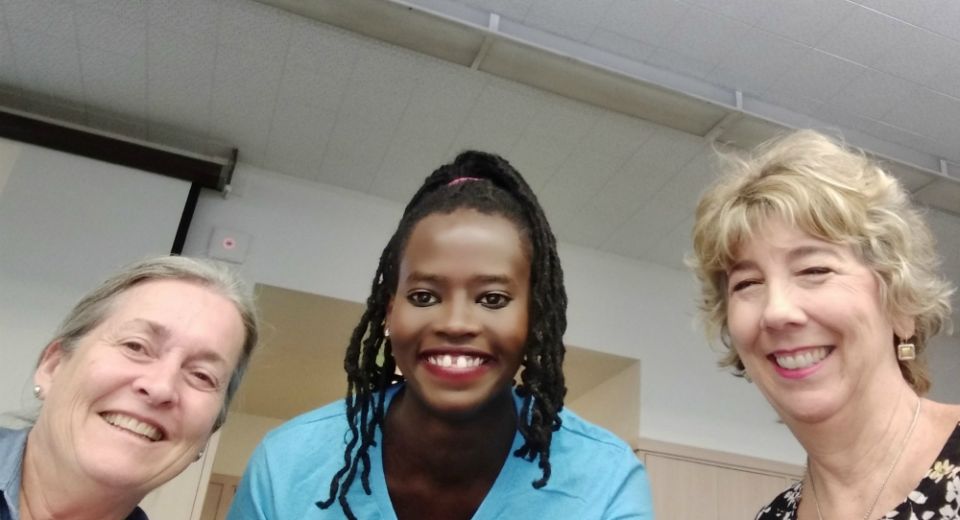 The Sisters of St. Joseph of Orange discern the most vulnerable and urgent needs through their St. Joseph Justice Center and then call for participation to anyone willing to address those demands. Volunteers are organized into groups that work together to bring solutions.

Our activities included making lunches for people experiencing homelessness, organizing school supplies to help kids and teachers prepare for the school year, gardening to keep safe the natural ecosystem around us, cleaning a mobile dental clinic, organizing and decorating apartments for families who are homeless, writing letters to local and federal legislators, and knitting and crocheting granny squares.

The day of service brought together people from different paths with a fondness for replacing indifference with concern and love, people who sacrificed their entire Saturday to make a difference mostly in the lives of those our sociopolitical system leaves behind.

The day of service always starts with a prayer and introduction from the Justice Center, and reflections are done in groups to usher in the day. 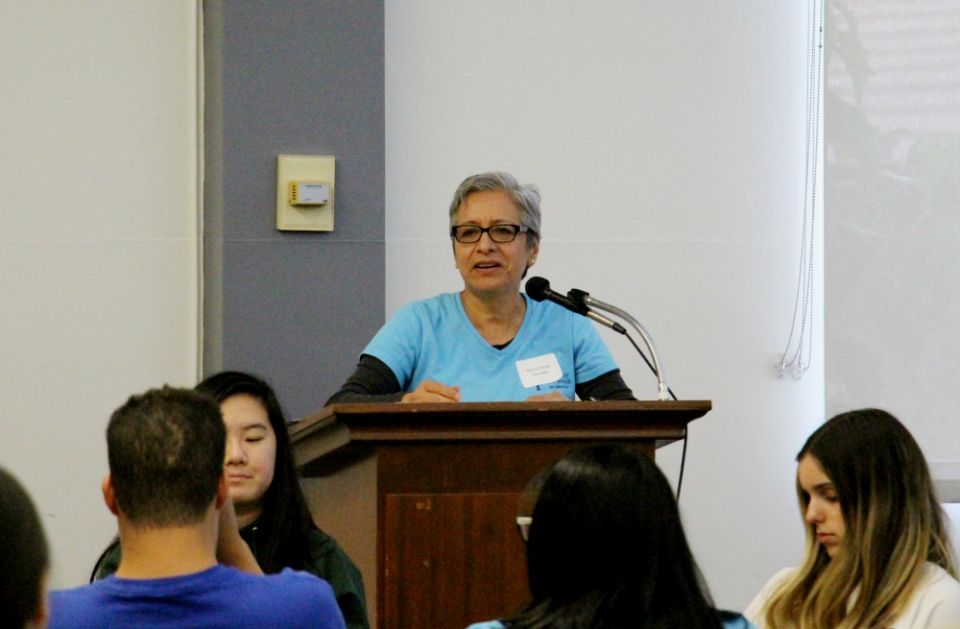 Maria Elena Perales, director of the St. Joseph Justice Center in Orange, California, gives opening remarks to participants in the Sept. 28 day of service. (Courtesy of the Sisters of St. Joseph of Orange)

One of the reflection questions we had to share about was: "What drew my heart to respond to the invitation of service?"

Answering that question in front of the five other people around my table of letter-writers, people I had not met before and who have a strong commitment to making a difference in the lives of those they serve, unnerved me.

I debated if explaining why I was at that table mattered more than why I was in Orange County, almost 10,000 miles away from my home country.

I didn't know how to narrate my journey from East Africa to Orange without omitting important details in the two minutes we had. I tried in vain to find in and around me a picture, a brochure, a reference, anything that could explain my presence.

In a trice, an idea rang in my mind and illustrated my exodus to the United States of America. I told them that life is a journey from Jerusalem to Jericho, smooth for some and rough for many. In every society, there are four kinds of people:

I am around this table because I choose to be the Samaritan, I said.

Every day brings an opportunity to lend a hand to someone, and it is up to us to choose to be priests, Levites or Samaritans of our time. On that Saturday, Sept. 28, around 100 people had chosen to be Samaritans and address the needs of our time. How fantastic. 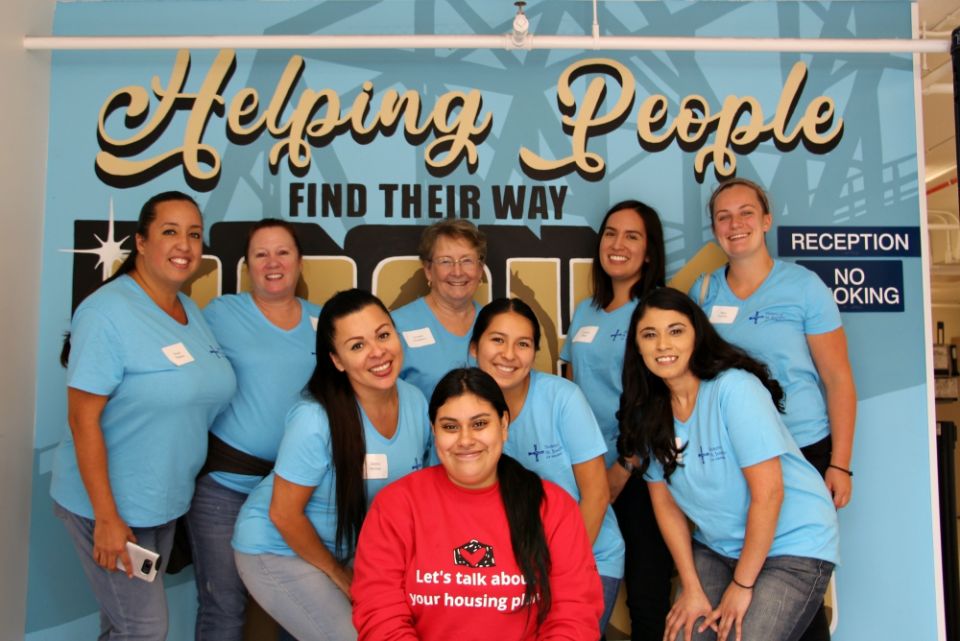 Samaritans of our times who spent their day of service at Bridges at Kraemer Place, a 24-hour emergency homeless shelter facility in Anaheim, California (Courtesy of the Sisters of St. Joseph of Orange)

Imagine if every day was a day of service. Think for a moment of how many people would feel the presence of God on Earth if in every country in the world, people chose to come together every day to mend each other's wounds.

Jesus did not continue the parable of the good Samaritan with an explanation of the feelings of the suffering man after someone finally noticed his wounds, after someone identified him as a brother and restored his dignity. But I certainly believe they were feelings of gratitude, belonging, love and joy, and the people we served in those 14 sites in September felt the same.

The verb "divide" would have retained only its somber meaning in my life if I had not been part of a mission aspiring to divide to heal.

From the stories we shared after service, we touched people's hearts with love, hearts that are otherwise punched with indifference, ignorance and irrational treatment. We are ready to do it every day within our own means and come back on Sept. 26, 2020, to serve again together in our neighborhoods.

[Honorine Uwimana is a St. Joseph Worker from Rwanda serving at Regina Residence with the Sisters of St. Joseph of Orange, California.]

Ministry | Samaritans of our times: a day of service in our neighborhoods

What does it mean to live a legacy?

This is what you can learn through service to others

'Prenez un quart de feuille': a prompt of the essentials

My five loaves and two fishes