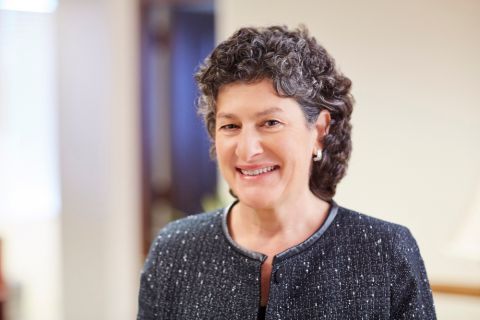 Washington — The head of the Catholic Health Association has urged President Donald Trump to reconsider his decision to pull the United States out of the United Nations' World Health Organization.

"Withdrawing from the organization at the height of the pandemic is counterproductive and only ensures that the U.S. will have little influence on these efforts" to reform WHO, said Mercy Sister Mary Haddad, the CHA's president and CEO, in a June 22 letter to Trump. "Indeed, now is the time to stand in solidarity with those in need around the world to save lives and provide hope."

Haddad noted that "for over 100 years, through yellow fever, the flu of 1918 and up to today, Catholic health providers have been at the front line of addressing global pandemics."

Thanks in part to "global cooperation through WHO," she said, "our nation and the world have been able to combat Ebola, smallpox, polio, rubella, measles, bird flu, HIV/AIDS and a wide variety of communicable and noncommunicable diseases. The success of these efforts has not only saved lives around the world, but also saved millions of lives here in the United States."

Haddad said in her letter, "We increasingly hear from our sister Catholic organizations in other regions of the world looking for information and resources on how best to prepare and respond to COVID-19."

She added, "At a time when the world faces a global pandemic and the rates of infection dramatically increase in the developing world, a global response that includes the United States is essential to build solidarity between people within our own country and around the world."

Haddad quoted Pope Francis in his "urbi et orbi" (to the city and to the world) address at Easter when he said, "The most vulnerable of our brothers and sisters living in the cities and peripheries of every part of the world, not be abandoned."

She also described what CHA members have done to fight the pandemic since it was declared March 11.

"In response to COVID-19, our members have cared for some of the first patients impacted by the virus and have led efforts in our communities to create new isolation units and testing areas, deploy virtual technology, and acquire unprecedented amounts of critical care machines and personal protective equipment to treat the most seriously ill coronavirus patients," Haddad said. "CHA supports our members, partnering organizations, and the church in a global mission of healing through research, education, consultation and collaboration.

"Through our international outreach programs, we are assisting organizations in other regions of the world looking for information and resources on how best to prepare and respond to COVID-19."

Instead of withdrawing from WHO, Haddad said, "we urge the administration to work with Congress and other countries to develop a long-term strategy to support the work of the WHO."

Haddad sent copies of her letter to the House Foreign Affairs Committee and the Senate Foreign Relations Committee.